It looks set to be an expensive summer for £15million bid for turned down.

Last summer's recruitment was a disaster from start to finish and left West Ham requiring major surgery this time around. A striker to give Andy Carroll some respite is a necessity and a reliable wideman to supply the ammunition is every bit as important.

That's why the Hammers have turned to a man José Mourinho described as “having the attitude of a child” while managing Arnautović at Internazionale.

The Austrian has rarely been out of the headlines in a checkered career which has seen him ‘borrow' Samuel Eto'o's Bentley, cycle into a golf cart, tear a knee ligament while playing with his dog and insult a Vienna policeman by saying: “Shut up, I earn so much I can buy your life.”

But the 28-year-old looks set to leave the Bet365 Stadium after his brother and agent, Daniel, told The Sun his client wants to move this summer.

“Marko is very thankful to Stoke City supporters for the past four years and I know Marko has paid them back on the pitch,” Daniel Arnautović said.

“But now the time has come to say goodbye and we want to do it in a nice way.

“When we re-signed last year the club promised they will not stand in his way if he one day wanted to leave. This day is now here.”

The Hammers are keen to bring Arnautović to the London Stadium to boost their attacking options. And the Austrian international, who scored six Premier League goals last season, is just the sort of player Slaven Bilić badly needs.

The Hammers' striking issues last season were well publicised. They are trying, once more, to rectify them by going back in for Chelsea forward Michy Batshuayi, a West Ham transfer target.

Others including Juventus‘ Mario Mandžukić, Köln's Anthony Modeste and Bayer Leverkusen's Javier Hernández have also been linked. But Arnautović is not an out-and-out striker in the same sense as the rest.

The combustible Austrian can play anywhere across the front four positions of Bilić's preferred 4-2-3-1 system and, more often than not, plays in quite a free role drifting in from the left to wherever play takes him. He is the kind of player you would always make room for. 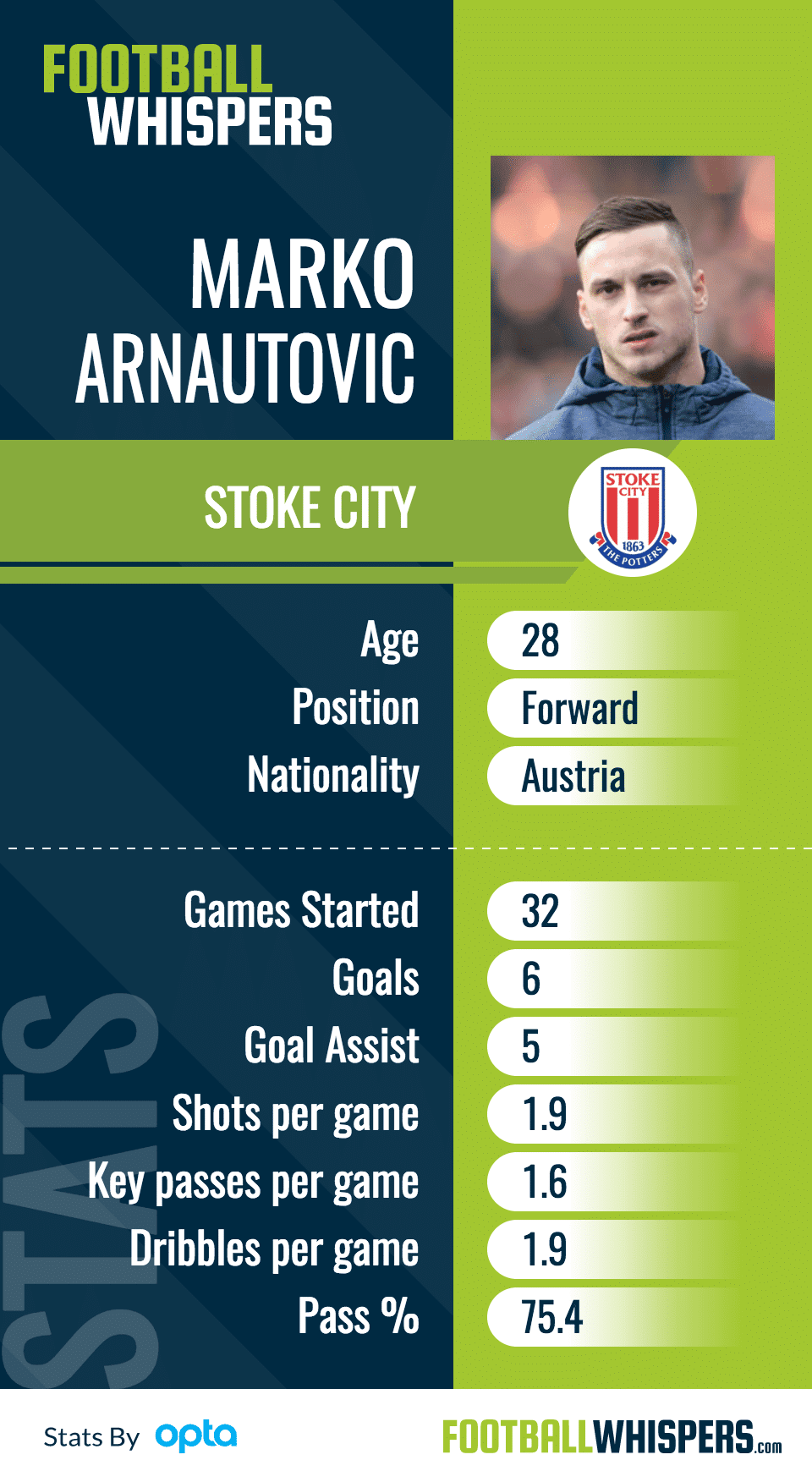 Arnautović is also someone who gets fans off their seats. He is unpredictable, pacy and loves taking defenders on. In the still below, taken from Arsenal's win over Stoke in May, he demonstrates that ability.

After controlling a ball over the top he gets the march on Rob Holding. However, the Gunners youngster gets back into position to block off the forward's route to goal.

However, Arnautović displays his impudence to roll the ball past the defender and fire in a dangerous cross which Wilfried Bony somehow heads wide. 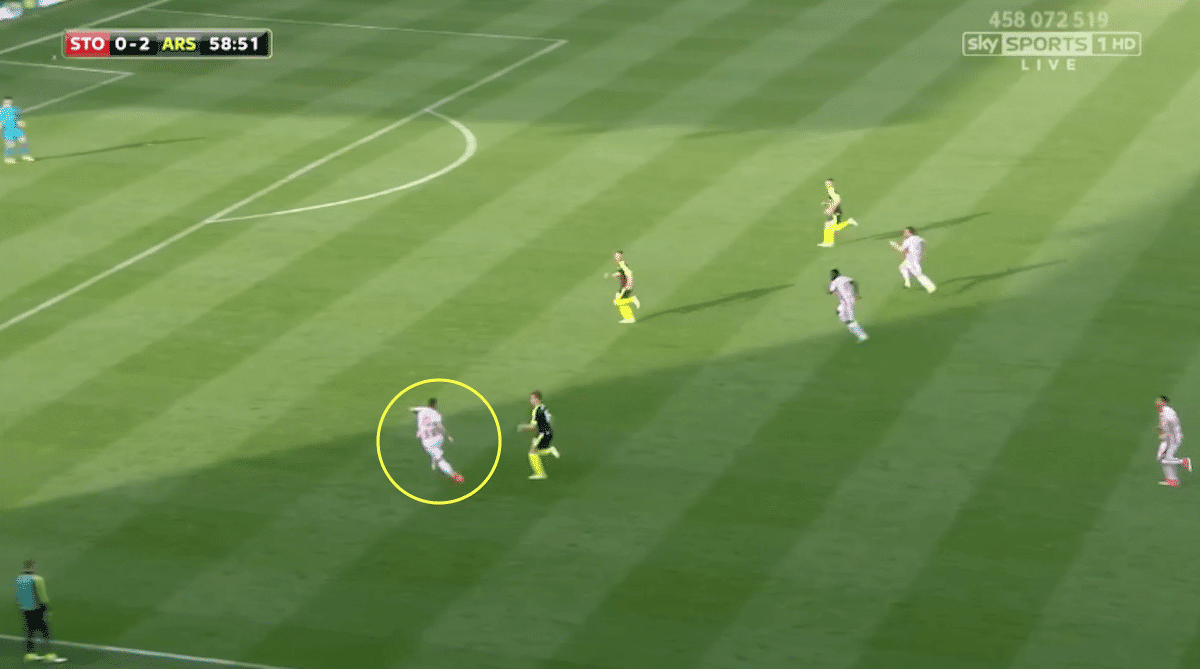 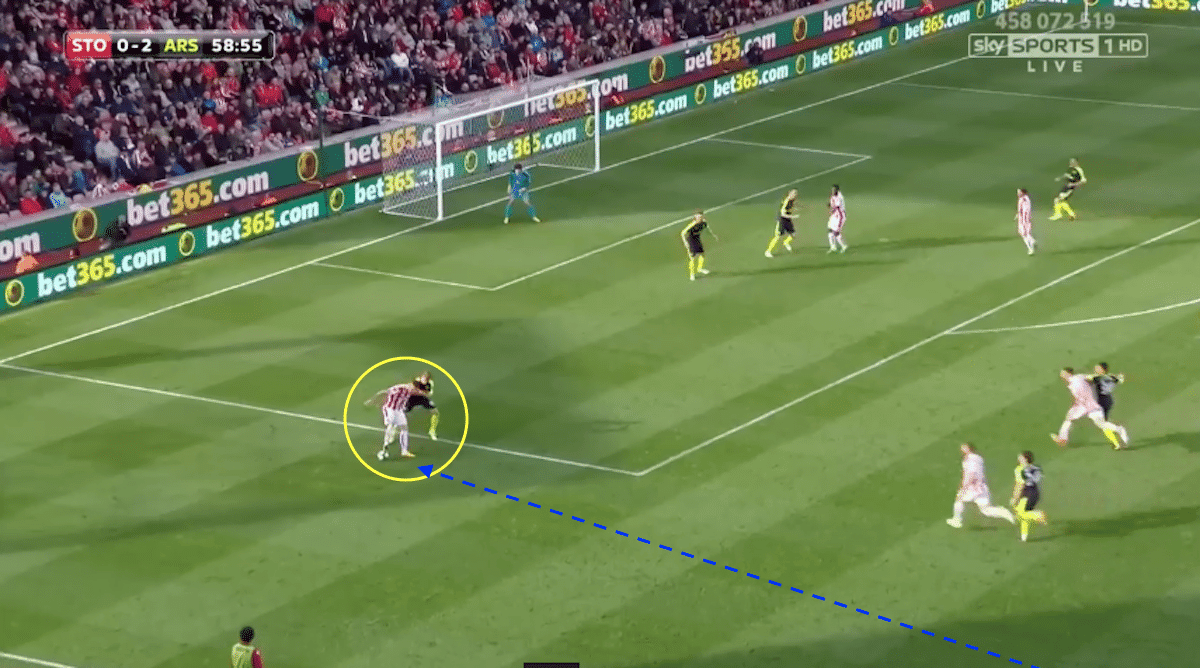 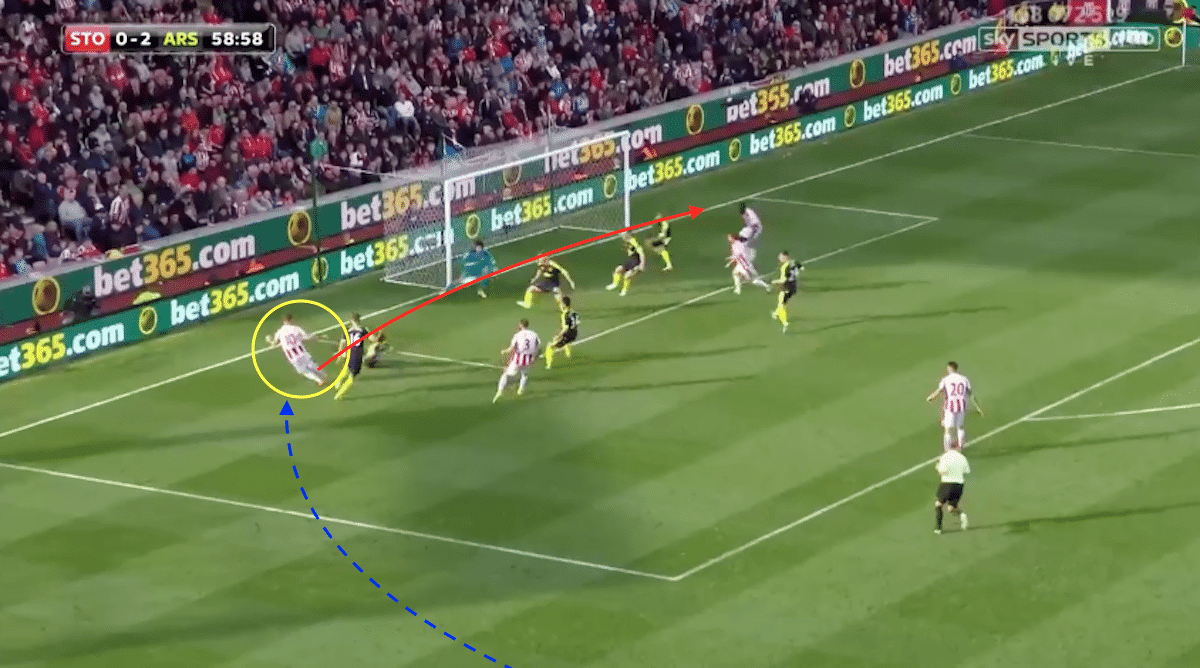 Arsenal did not learn their lesson, though, and eight minutes later it is Arnautović who gets the Potters back in the game by providing the assist for Peter Crouch to nod home.

The Austrian skips down the left-hand side and, given far too much room by Holding, whips a dangerous cross into the middle for Crouch to power a header past Petr Čech. 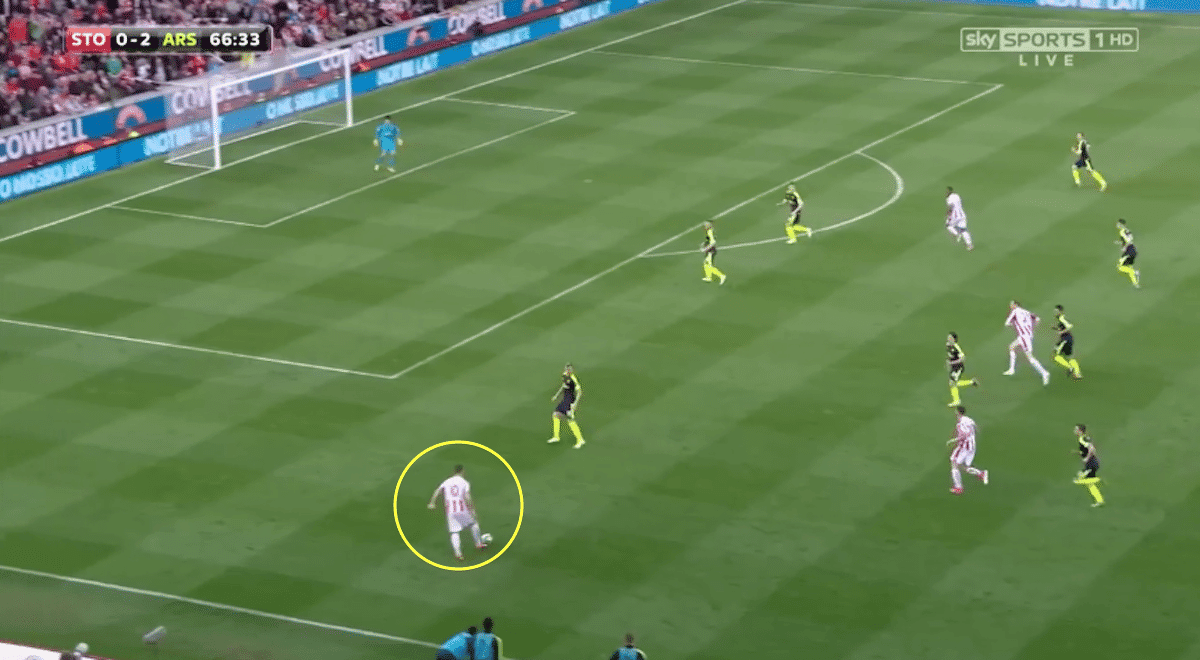 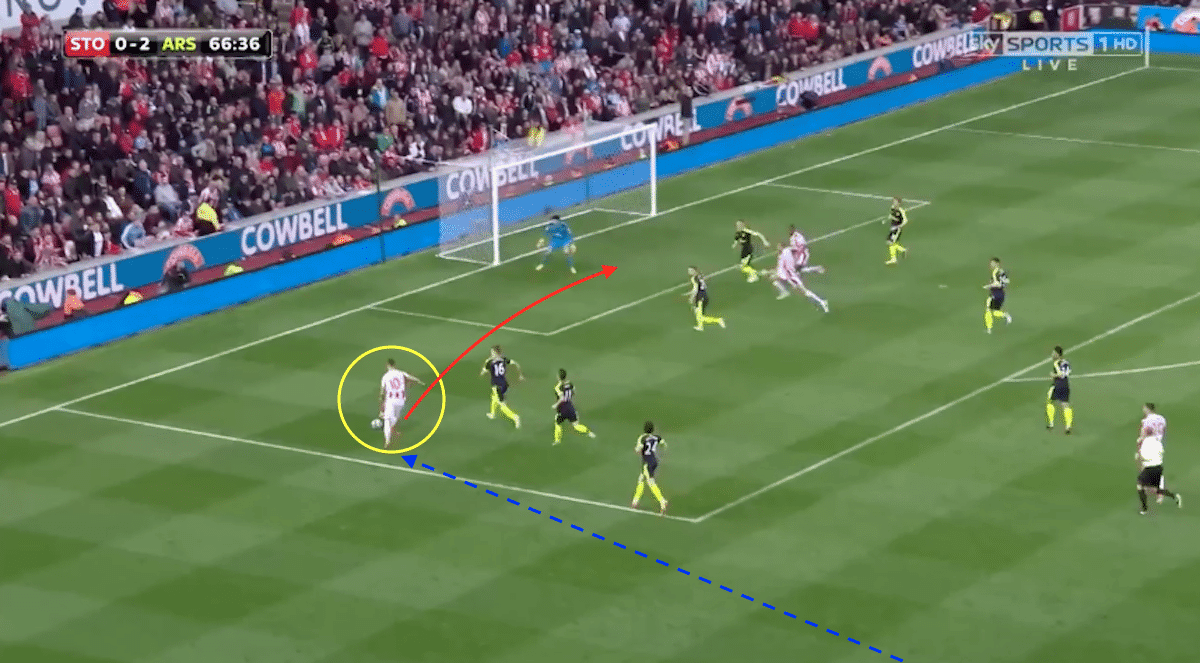 West Ham lack players who can beat a man and put a dangerous ball into the penalty area. But Arnautović's biggest strength is his dribbling and crossing.

The January addition of Robert Snodgrass from Hull City was meant to plug the gap left by Payet, who averaged 2.8 crosses per game. But the Scotland international struggled to repeat his Tigers form and has been linked with Brighton & Hove Albion this summer.

It was the Hammers' striking additions who came in for the most flak last season but the wingers they signed also largely flattered to deceive.

Turkish international Gökhan Töre managed just five appearances before a season-ending injury cut his loan spell from Besiktas short while Sofiane Feghouli was a let-down following his arrival from Valencia.

Of the Hammers' wingers only Michail Antonio really delivered. But a ‘significant' hamstring injury deprived Bilić of the former Reading and Nottingham Forest man from April onwards and his absence was noticeable.

Arnautović recorded five assists last season for the Potters – more than any player who spent the season at the London Stadium. He also contributed more key passes (1.6), dribbles (1.9) and won more free-kicks (1) per game than in any of his previous three seasons with the club.

All of that during what was far from a vintage campaign for Stoke who slipped from ninth the previous year to 13th under Mark Hughes.

After three consecutive top-half finishes the perception is the Potters are one of the Premier League's least exciting teams and that is why they are so desperate to keep Arnautović.

His unpredictable nature has been his undoing in the past but it is exactly that which the Hammers are seeking from this summer's transfer window.