Every club has a problem position which they've failed to solve for years. For West Ham United, it's striker. Which makes links to Mario Mandžukić only natural.

What also makes those reports a perfect fit is that the Croatian is ageing (33), past his best and would demand an enormous salary in order to leave Juventus.

In other words: the perfect West Ham signing.

Few Premier League clubs have such a magpie-esque tendency as the Hammers. They are attracted by shiny things, discarded treasure, and if history has taught us anything, it rarely serves them well.

It's this recruitment ‘strategy' which saw perma-crock Jack Wilshere pitch up at the London Stadium last summer when few other clubs would have touched the one-time boy wonder thanks to his exhaustive injury record. The former England international has duly made six Premier League starts since.

Returning to Mandžukić, there is a lot to be admired about the warrior-like Croat.

Even at 33, he remains a fearsome forward and showed as much last summer by leading his nation to their first World Cup final in Russia before retiring with 33 goals in 89 outings for his country.

The below clip, from Juventus' Champions League final defeat to Real Madrid in 2017, underlines two of Mandžukić's calling cards.

Firstly, his knack of coming up with big goals – on this occasion an equaliser in the final of Europe's premier club competition – and secondly, scoring spectacular agile strikes.

At club level, the forward is a serial winner, lifting honours in his homeland, Germany, Spain and Italy. While he has most regularly played on the left-hand side of attack for Juventus in Massimiliano Allegri's 4-2-3-1, Mandžukić is still a reliable goalscorer, hitting double figures in each of the last 13 seasons. In fact, not since his breakout campaign with NK Zagreb (2005/06) has he failed to reach double digits in all competitions.

While he only weighed in with ten goals last season as Allegri tried to crowbar all of his attacking weapons into the side, several were crucial – most notably his winners against Internazionale and Roma, as well as his brace in the 3-1 win over closest challengers Napoli.

The former Bayern Munich and Atlético Madrid forward is part of a very select band of players who can be defined as a ‘wide target man'. At 6ft 3in he is not the typical shape for a wide player but his imposing frame makes him a versatile asset, capable of knocking down diagonal balls or drifting inside to be the focal point of attack.

Even though he has had to reinvent himself slightly in recent years, he remained an important cog in Allegri's winning machine in Turin.

“Mario is player who has a different motor to the others,” the former Juve coach said. “He does an amazing amount of running, he is great tactically and he has really good technique. He is an important third attacker.” 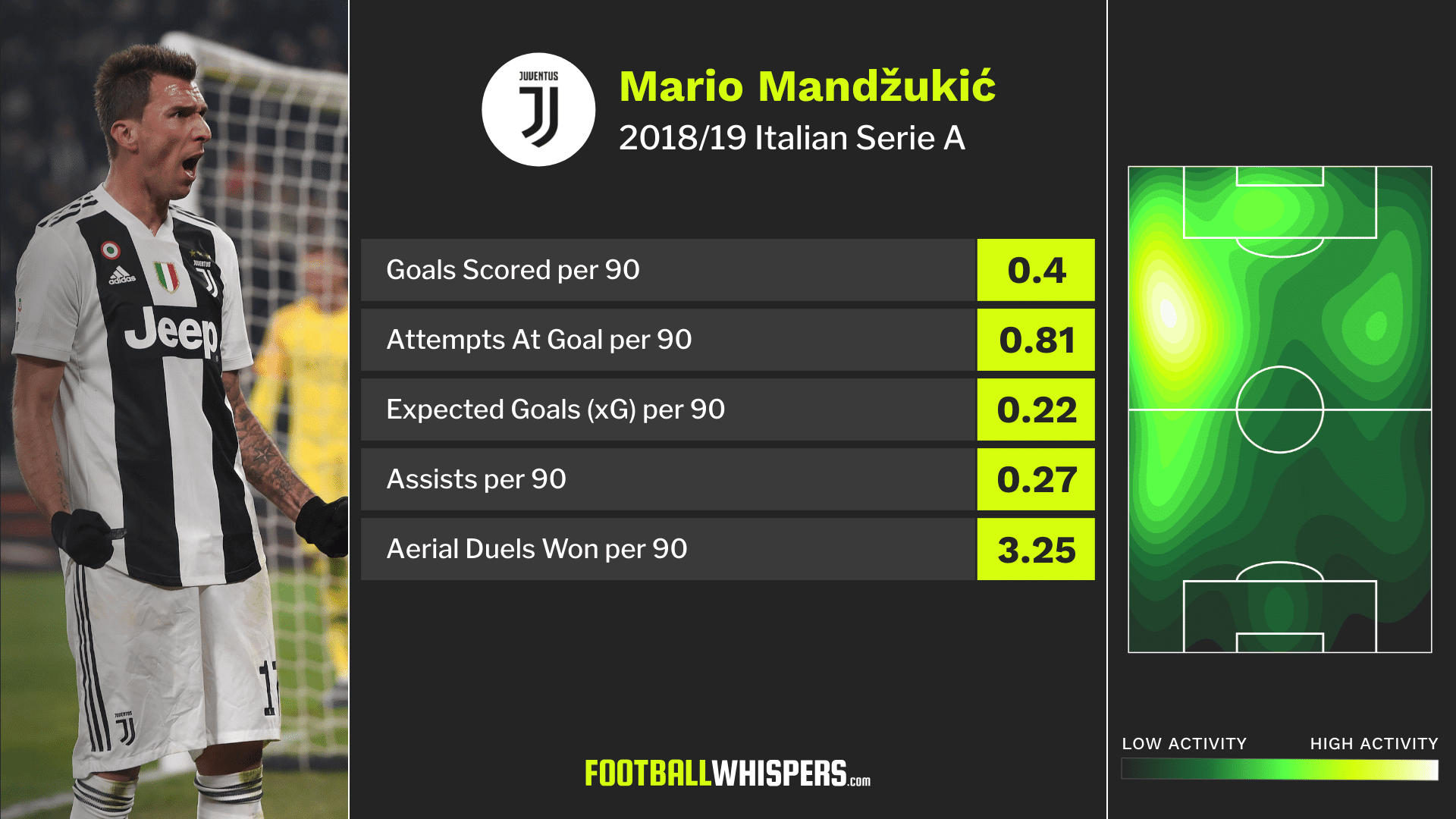 Unsurprisingly given his physical attributes, Mandžukić scored at a rate of 0.18 headed goals per 90 last season, the fifth-highest among forwards in Serie A, while his 0.81 headed attempts per 90 ranked him 18th among his striking peers.

On the other side of the ball, he won 3.25 aerial duels per 90, putting him 23rd in Serie A, proving an invaluable defensive weapon for the Bianconeri in their march to an eighth straight Scudetto.

That all sounds very promising and might lead you to wonder why signing Mandžukić would be such a bad thing for West Ham.

The answer lies more in the ramifications of the deal rather than the player himself.

Mandžukić is widely known to be available after Juventus coach Maurizio Sarri was forced to leave him out their Champions League squad this week. But he still won't come cheap once all costs are taken into account.

Whatever fee the Hammers pay for the Croatian – and given Juventus' desperation to move him on they can expect a sizeable discount – they still won't ever get that money back thanks to Mandžukić's advancing years. From a Financial Fair Play point of view, he will be a write-off.

Equally, his wages will not be modest. Until Cristiano Ronaldo came in and took centre-stage at the Allianz Stadium, Mandžukić was a key man for the Old Lady and his contract – which runs until 2021 – will reflect that status.

Furthermore, he's not guaranteed any more playing time in East London than he is in Turin. Club-record signing Sébastien Haller has made a fine start to life in the Premier League with three goals in as many games.

In Manuel Pellegrini's preferred 4-1-4-1 system, the Frenchman is the starting striker and Felipe Anderson has the left-wing berth nailed down. Moving the Brazilian playmaker inside would not work because the fit-again Manuel Lanzini occupies the freer of the two central spots alongside club captain Mark Noble. Pairing two creative types together – neither of whom are known for their defensive contributions – would be disastrous.

All of which leaves Mandžukić facing the prospect of joining the Hammers to perform the role of back-up once more. If he is to do that anywhere, it might as well be where he is competing for honours.

But West Ham will reason that for a reduced price, Mandžukić's ability, experience and winners' mentality are worth the associated downsides.

If this is the season the Hammers are to truly kick on and break into the Premier League's top eight, it's time they grew up and stopped playing Football Manager in the transfer market. Resisting the urge to sign Mandžukić would be a start.