Being a second-generation footballer is as much as a negative as it is a positive. The name, of course, opens doors but it also means there’s a shadow cast over you and you’re regularly compared to your parent.

And as far as shadows go, very few are bigger than the one cast by Lilian Thuram.

A World Cup and European championship winner, the most-capped player in the history of the French national team and indisputably one of the finest right-backs of all time, the former Parma, Juventus and Barcelona defender had a career to remember.

People took note of Marcus Thuram because of his father. It’s because of this that his achievements went somewhat under the radar. Though Lilian had a helping hand in his son’s decision to join Sochaux, it was Marcus’ ability that resulted in his making his debut as a 17-year-old.

He impressed enough to earn a move to Ligue 1 side Guingamp when still a couple of months shy of his 20th birthday. It was there he transformed from being Thuram junior to one of the most exciting talents in Europe.

The potential was always there. During the European Under-19 Championship in 2016, for example, he held his own alongside more established names in Issa Diop, Jean-Kévin Augustin and Kylian Mbappé as France went on to claim the trophy.

Following his move to Guingamp, however, the challenge for Thuram was to stand out in a team not tipped to do much in Ligue 1. He did just that, posting a number of eye-catching numbers before impressing for France at the Under-21 European Championships during the summer.

Though he did boost his Ligue 1 tally for the 2018/19 season (10) with penalties (four), it is worth noting that even with those removed he still struck over 25 per cent of the goals Guingamp scored last season.

Being expected to perform for a struggling side is one thing, actually being a game-changer and a match-winner is another thing entirely. But Thuram showed he was much more than just talk by walking the walk for Les Rouge et Noir.

While many obsessed over the Nicolas Pépé transfer saga which seemed to dominate the entire summer, Borussia Mönchengladbach, given a relatively free run at the then 21-year-old, went about bagging themselves Thuram for a paltry €12million.

For context, Manchester United paid more to sign Daniel James from Swansea City. British premium, of course, comes into the valuation of both but it is peculiar that English clubs weren’t after Thuram.

The France Under-21 international had over 100 first-team appearances to his name and was coming off the back of a 13-goal season. James, on the other hand, had played 38 games for Swansea and scored five goals. Yet he was worth the risk while Thuram wasn’t.

But Premier League teams may be rethinking their decisions with the 22-year-old impressing in the Bundesliga for the surprise table-toppers. 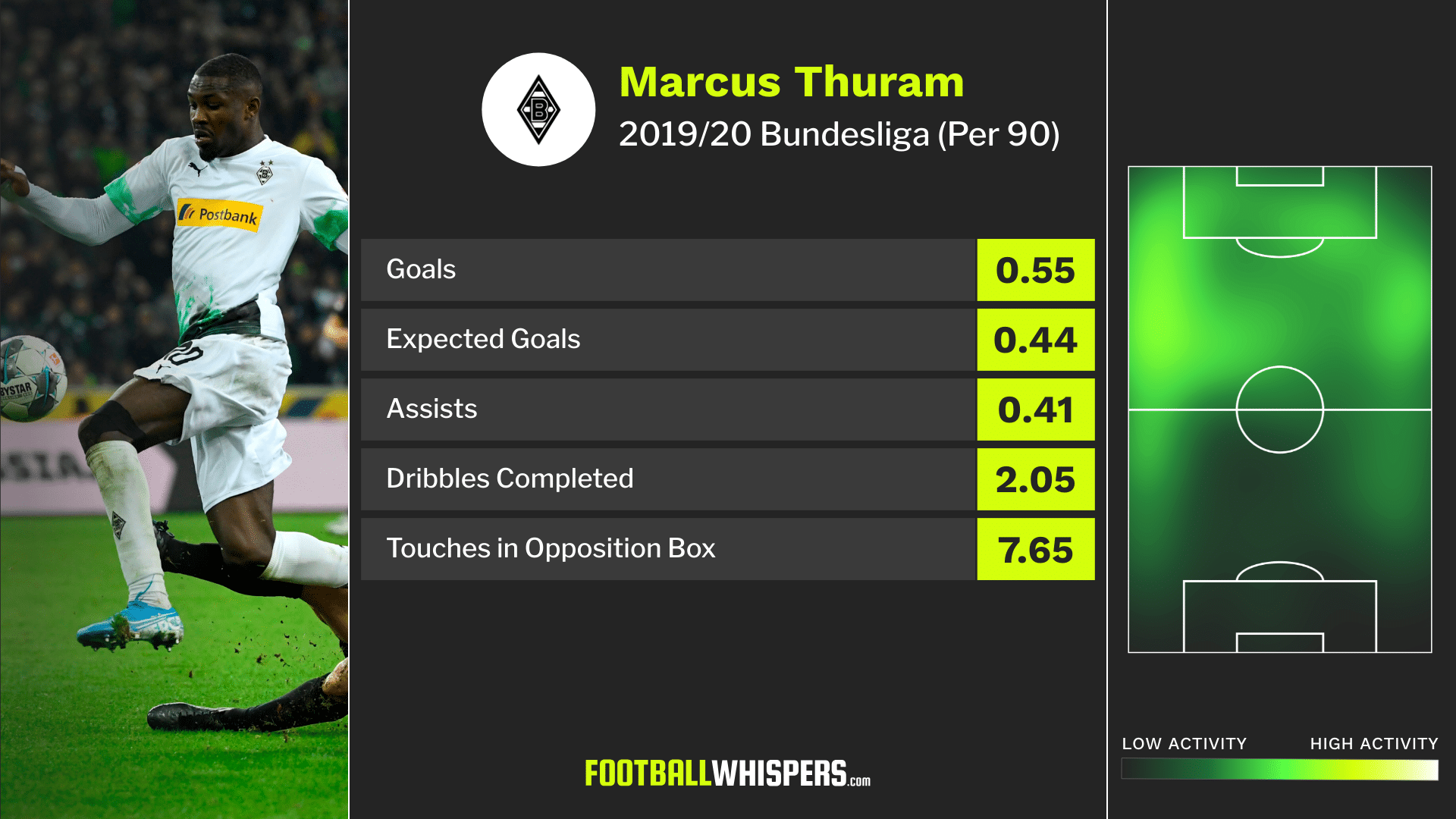 Thuram's output has quadrupled while his underlying numbers have doubled. Yes, he's playing in a better team now but they're playing more to his strengths and he's delivering.

Not all players do that. But as he's shown throughout his career, Thuram steps up when the pressure is on.

He's also creating more chances and his expected assists average is up to 0.29 from 0.11. He's attempting and completing more dribbles on a per 90 basis and he's having significantly more touches in the penalty area. The sample size isn't the largest but if Thuram was put on the market tomorrow, Gladbach could comfortably treble their money.

Instead of being known as Lilian's son, that statement now arrives after the fact he's one of the Bundesliga's brightest stars. It won't be long until Premier League sides finally take note.