A World Cup and European championship winner, the most-capped player in the history of the French national team and indisputably one of the finest right-backs of all time, former Parma, Juventus and Barcelona defender Lillian Thuram casts a long shadow.

Thuram's eldest son, Marcus, though, is beginning step out of that shadow.

The 21-year-old Guingamp winger, who is reportedly a target for Arsenal and Borussia Dortmund, is making waves in Ligue 1, despite lining up for third-from-bottom Guingamp.

Yet to make a senior debut for France, his father's record of 142 Les Bleus appearances potentially sets an unattainably high bar for Thuram Jr, and he may never be able to match his dad's illustrious list of club, international and individual honours.

But Marcus Thuram is intent upon striking his own path, not leaning on his famous last name, letting his performances, rather than what's written on the back of his shirt, determine his path.

That's why, on his father's advice, Thuram joined Sochaux at 15, electing to start out at one of French football's lesser lights, rather than depending on the family address book to secure a deal with a bigger club.

This image is absolutely beautiful. Tells the journey of Buffon, as a youngster, playing alongside Thuram and against Weah, while, now with PSG, he plays with Weah’s son and against Thuram’s boy.

It was a wise move. After impressing in the Montbéliard club's second string, Thuram made his senior debut aged just 17, before becoming a regular with the Ligue 2 side during the 2015/16 season. Were he on the books of, say, a Paris Saint-Germain or a Lyon, such exposure to first-team football would have been in much shorter supply.

The fact the teenage Thuram was remarkably physically advanced for his age, standing an imposing 6ft 2ins and preternaturally strong when winning and guarding the ball, certainly helped his assimilation to senior football.

Likewise, Thurman's size and athleticism aided him in standing out at junior international level, where he was a member of France's European Under-19 Championship-winning squad in 2016, alongside Issa Diop, Jean-Kévin Augustin and Kylian Mbappé.

But, while his physicality certainly makes him a unique prospect as an attacking player, difficult to off-balance or dispossess, it is his technical gifts that most mark him out as a prospect of serious potential.

Although he has experience playing centrally and on the right, Thuram is most commonly found on the left side of a front three, where he employs his prodigious dribbling ability to great effect. 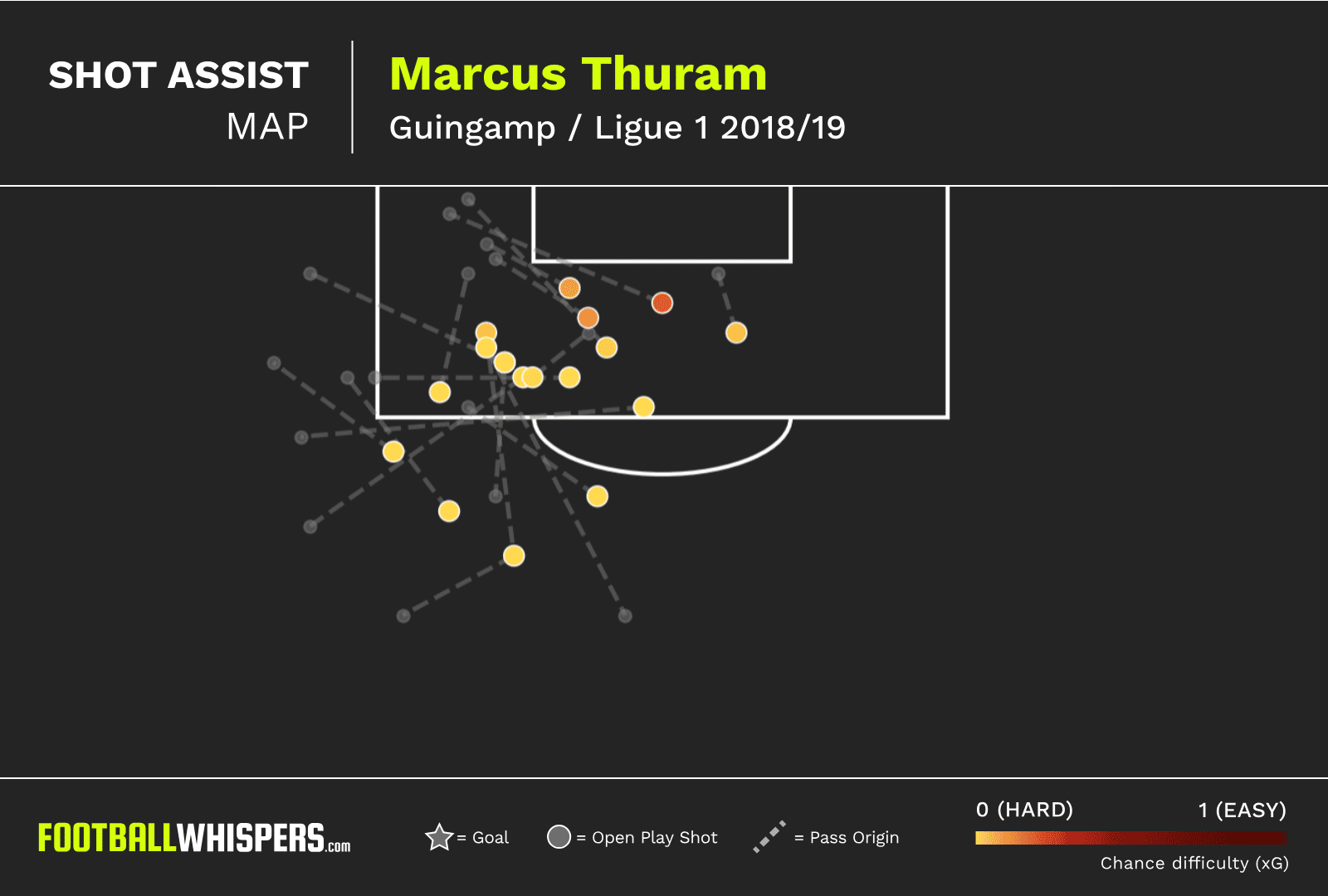 The 21-year-old ranks fifth in Ligue 1 for successful take-ons per 90 minutes (3.78) this season, ahead of the likes of Mbappé, Nicolas Pépé and Nabil Fekir – a statistic all the more astonishing when you consider he plays for a team battling relegation, who average just a 44.6 per cent share of possession.

Naturally right-footed, Thuram is a threat when cutting inside and driving into shooting range, but he is also proficient with his left foot, enabling him to bolt for the byline and deliver dangerous crosses, making him a difficult proposition for opposition full-backs to defend against.

Although Guingamp often find themselves on the losing end of matches against Ligue 1's traditional powers, Thuram appears to thrive when up against the division's best, with his 11 all-competitions goals this season including a double against Lyon and strikes versus Monaco and PSG.

And his experience of playing for one of Ligue 1's strugglers has ensured Thuram is diligent in his off-the-ball work, tracking back and tucking into defensive shape without hesitation when out of possession – he ranks third among Ligue 1 attackers for total successful tackles (27) this term. Sharp defensive instincts run in the family, after all.

The one major flaw in the young wide man's game at present is his discipline, having already received two straight red cards this seasons, as well as three yellows.

With more than 100 senior career appearances already under his belt and coming to the end of his second season with Guingamp, Thuram may soon be ready to take the next step on his thus far astutely measured path.

He knows his last name carries plenty of weight in the football world, but he won't let it weight him down.

“If I go into a stadium where people don’t like me, it makes me want to do more,” he told L'Equipe.

“When the fans insult me, it excites me. Given my name, it’s normal I'm a target. I wear it proudly and I don’t feel pressure because of it.”