Marcus Rashford finds himself in a position many other forwards have found themselves in throughout the years: he’s in limbo.

Is the Manchester United star a striker or a wide forward? It’s a question regularly being asked and one nobody seems to have an answer for.

“We’ve almost wanted Marcus to be that option as a No.9, but I’m still not certain that is where he is happiest and where he does his best work,” England boss Gareth Southgate said this week.

“A lot of his development at United was as a ‘wide raider’. I think he isn’t as strong as Harry (Kane) with his back to goal and holding play up, so if he plays as a No.9, he will play it differently to Harry. But a lot of his best work is in that inside-left channel coming in off the line.”

Rashford is often harshly criticised. There are complaints the 21-year-old doesn’t score enough, isn’t clinical enough and, simply put, isn’t a centre-forward. But when he’s deployed on the left of the attack it's often claimed he is wasted and there’s an outcry to have him moved back to a central area.

Yes, he’s getting Premier League minutes and that, of course, is a positive. But his versatility means he’s not staking a claim in any set position. There’s a chance he matures into a Jack-of-all-trades player when he could’ve – and probably should have – been much much more.

It’s a phase all young forwards go though. They aren’t quite reliable enough to lead the line but they're good enough to be involved.

It happened with Wayne Rooney at Old Trafford. Danny Welbeck trod the same path with the Red Devils. Daniel Sturridge endured a similar spell while at Chelsea. Pierre-Emerick Aubameyang, too, spent a considerable amount of time in a wide position before switching. There are countless other examples throughout the Premier League era.

Some, not all, eventually develop into the centre-forward many believed they could be. They needed the right guidance and a manager who trusted them completely. Rashford doesn’t have either of those yet.

Reports last week claimed Solskjær believed Rashford lacked a killer instinct in the penalty area. He might but it’s difficult to judge fairly when the system he’s used in changes on such a regular basis.

The Manchester-born forward isn’t being managed effectively. Rashford is still young but he’s experienced. He’s appeared in over 200 matches for United and England. Yet inconsistency and questionable decision making plagues his game.

The United coaching team should be shaping him a little better. It’s nothing drastic, just instructing him to take fewer shots from distance would be a start. 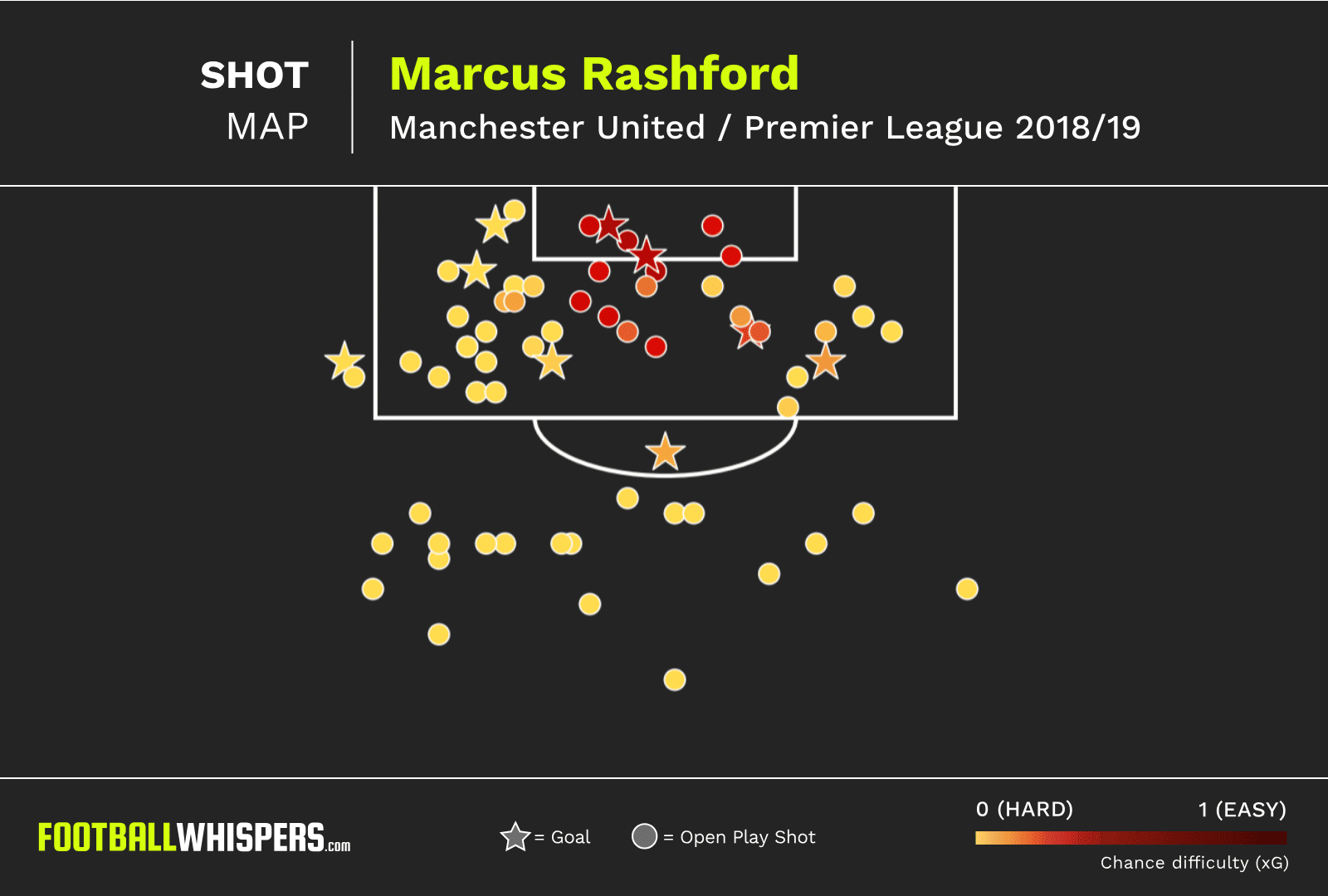 The above map highlights Rashford’s open-play shots during the 2018/19 season. As you can see, he isn’t shy about lining one an effort from distance but he rarely converts them, scoring just twice from outside the penalty area last term.

It’s been a similar story during this campaign, too, even when on international duty. Against Bulgaria, Rashford had five shots. Of those, he worked the goalkeeper once, had three of them blocked and one was saved. But only one of those arrived inside the penalty area.

And against Crystal Palace, Rashford had just one shot and this was from north of 25-yards. 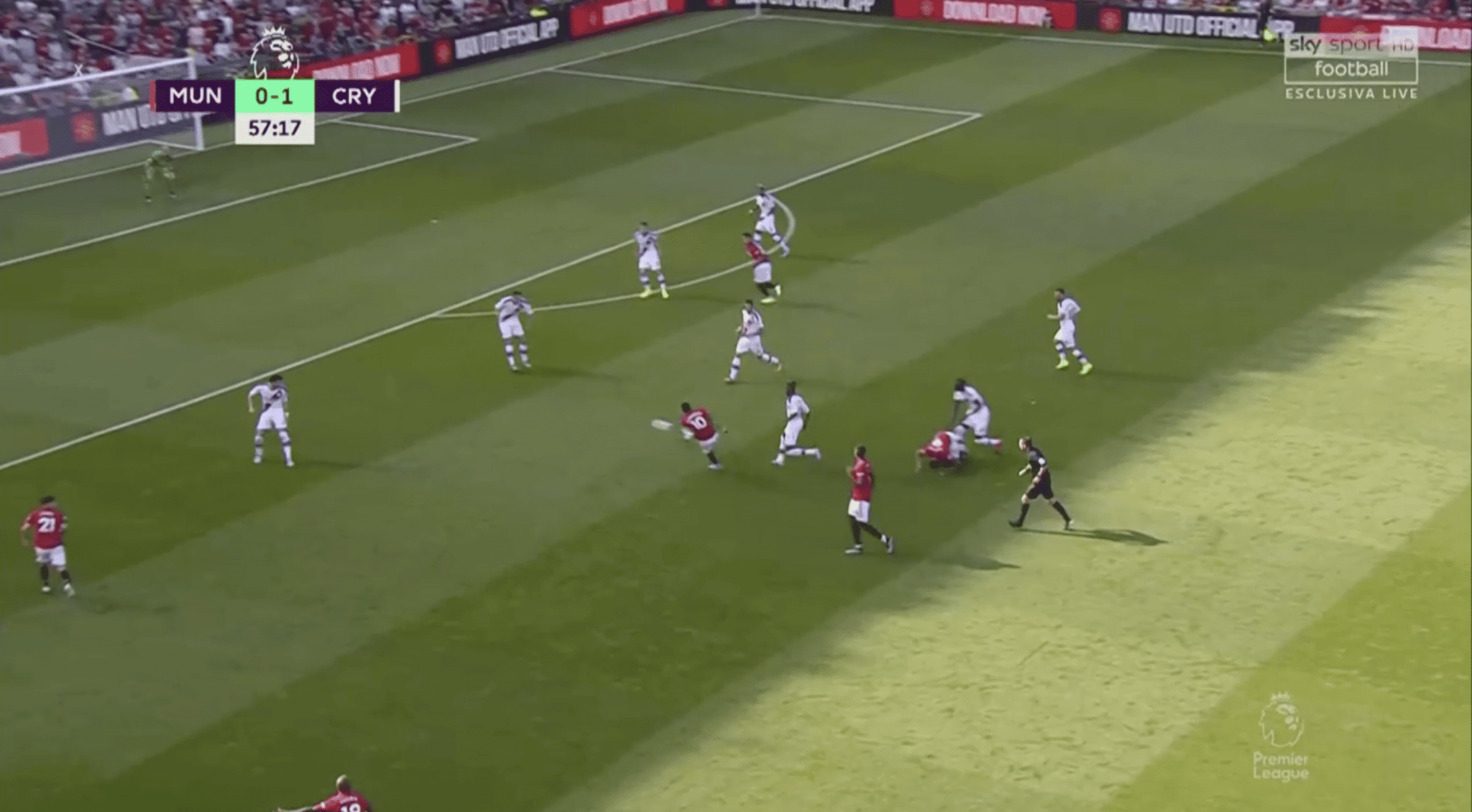 He needed to be more frugal with his shot selection. In search of a goal, the Red Devils required Rashford to show more intelligence in that position of the pitch. He could've threaded a pass through to Daniel James on the left before darting into the penalty area.

The England international could have also carried the ball forward and forced the away team into stopping him, either creating space or winning a free-kick in a dangerous area.

Decision making is what separates the elite from the good. The clinical finishers from just goal threats.

If Rashford wants to be considered the former instead of the latter, he needs to show that there's a maturity to his game. If not, he's likely going to be considered a wide forward for quite some time.