RAFAEL Benitez looks like he wants to raid former club Real Madrid in a bid to end the summer saga over the switch of Moussa Sissoko.

Forwards Marcos Llorente, 21, and Mariano Diaz, 23, are the Real youngsters on the radar of former Bernabeu boss Benitez – who will need to replace the forward thrust of Sissoko should the powerful attacker depart the Championship side.

Having been relegated with the ‘Toon’ last season, and with a relatively unheralded 37 caps and one goal to his name before the Championships in his homeland (now 44 caps) – Sissoko’s stock rose dramatically during the European Championships to a point where a fee of around £35 million is being touted.

Rumours that Frenchman Sissoko will swap Tyneside for the Spanish capital have risen sharply since the end of the Euros tournament, where the attacking midfielder was a starter for the hosts in their shock final loss to Portugal at the Stade de France.

Impressed national coach Didier Deschamps involved the former Toulouse man in six of France’s seven Euros matches – including all four knock out round games – even selecting him ahead of likes of N'Golo Kanté on route to the runners-up position.

As many club managers have, Magpies boss Benitez handed Sissoko an extended break following the Euros. The £35 million-rated attacker is due to report back for the pre-season camp this week but was not part of an open training session at St James’ Park on Monday.

But with Newcastle – back in the second tier of English football for the first time since the 2009/10 season – opening their Championship campaign at Fulham this Friday, time is of the essence for Benitez and owner Mike Ashley to get a deal over the line.

Eight players have already moved to the North East club so far this summer – including Ciaran Clark who signed for £5.5 million from Aston Villa on Wednesday. Hull City’s Mohamed Diamé is set to undertake a medical ahead of his transfer from the KC Stadium – and could prove a replacement should Sissoko move on.

Zinedine Zidane’s Champions League holders, Real also start their new season when they take on Europa League winners Sevilla in the UEFA Super Cup on Tuesday (9 August) – and so the Frenchman will also be keen to conclude any swap for Sissoko that includes any of his young players as soon as possible.

When asked whether certain players, including Sissoko, will be in the black and white stripes in the forthcoming season, Benitez said: “It depends on each one. Some players maybe we will need them – and they will have to stay. Some players we will know that we can replace them for good players and they can leave. But it depends on each one, the positions, the offers – a lot of things.

Having left the Bernabeu in January after seven months in charge, Benitez is certainly well placed to rate the Spanish giants’ young talent – especially when you consider that the former Liverpool manager has played for and managed Real’s ‘Juvenil’ (youth) teams and the Castilla ‘B’ team in the past. 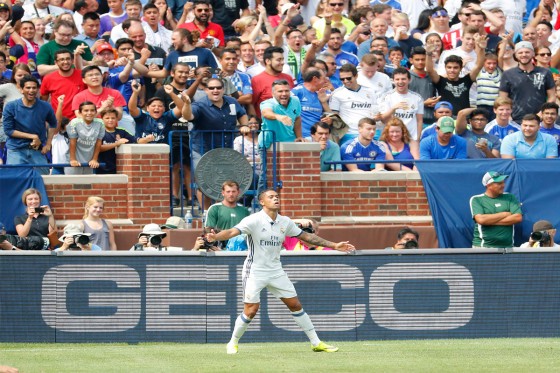 Both playmaker Llorente and forward Mariano played under Zidane for the Castilla side before the World Cup winner took over the first-team reins from Benitez. Indeed, last term Mariano – a Dominican Republic international – scored 30 goals in 40 games in Segunda División B.

The duo have been involved in Real’s pre-season programme – Mariano scoring in the 3-2 win over Chelsea, in Michigan, and Spain under-19 international Llorente also featuring as a second-half substitute in that match and the 3-1 loss to Paris Saint-Germain in Ohio, last week.

Talented right-footed creator Llorente describes himself as ‘a technical, skilful and agile player with good vision’ on his official Real Madrid biography – which adds that the 21-year-old is ‘a very intelligent and determined midfielder’, with an ‘outstanding imagination and ability to beat a man’.

Those attributes are the reason Benitez handed the youngster his Bernabeu debut last season – one of two La Liga appearances, plus one in the Copa del Rey – and is keen to bring both he and team-mate Mariano to St James’ Park as part of the Sissoko package.