Some families are just born with greatness in their blood. For Marcos Llorente, it is almost destiny that he will become a regular for Real Madrid. However, recent reports suggest that Arsenal are willing to break the bank to land the Spanish defensive midfielder.

The 21-year-old spent the summer playing for Zinedine Zidane in America, but to gain more experience he was loaned to La Liga side Deportivo Alavés. Both his father and grandfather played for the Madrid club, and his Great-uncle, Paco Gento was an integral part of the club as Los Blancos won six European Cup titles.

“I'm proud that Gento is my great uncle,” Llorente told Marca in a revealing interview. “He always tells me about humility and work, When I was younger, Gento and my father showed me around the Bernabeu.”

Everything that the young midfielder says has class and maturity about it. After starting 11 times for Alavés this campaign and playing for the Spanish Under-21 side, he is starting to make a name for himself and teams outside of La Liga are taking notice.

Still can't quite fathom the reason Real Madrid loaned out Marcos Llorente (w/o ability to recall him) with no natural cover for Casemiro.

“During preseason, my intention was to stay,” he admitted. “But I spoke with [Madrid director] Jose Angel Sanchez, with Zidane and my family, and decision was taken to go on loan. The idea was to play at least 30 games, and I am playing a good bit here. Next summer we will see what happens.” 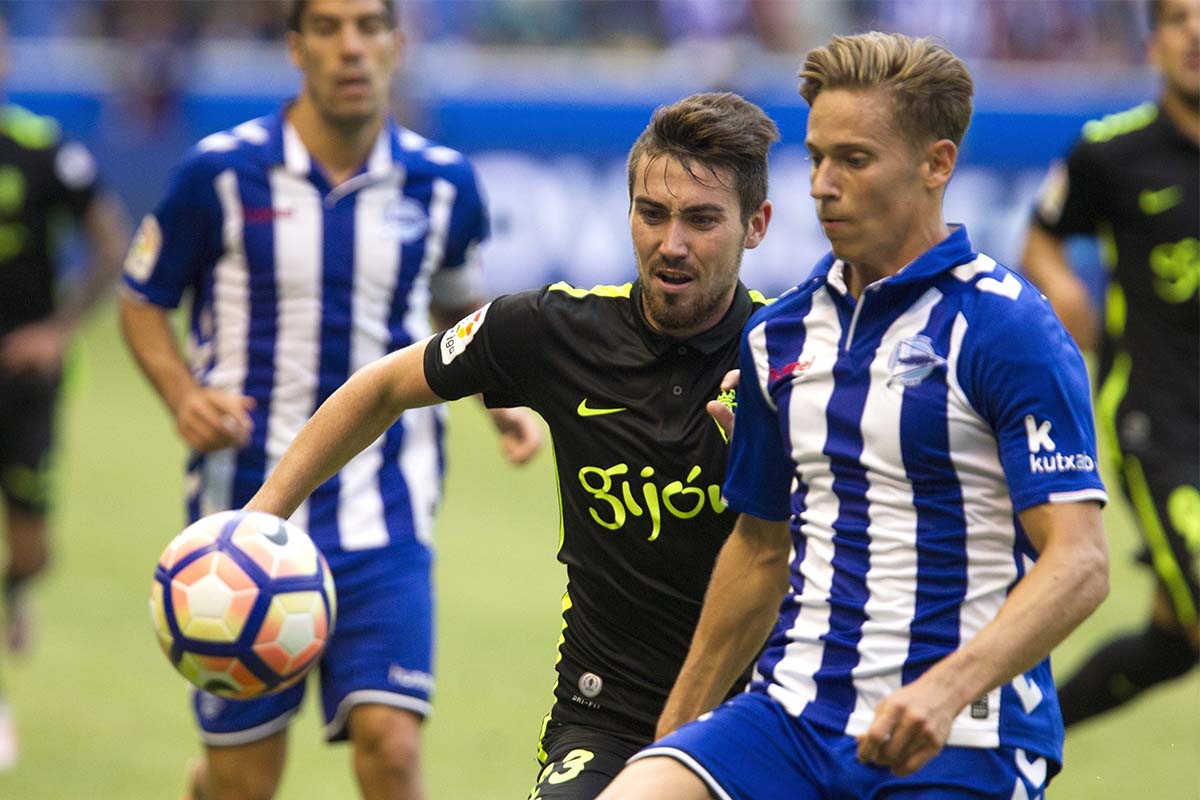 Real have a decision to make in January, with the injury to Toni Kroos, Zidane is only left with Casemiro in that position. However, if he brings back Llorente too early, he will not be happy with just taking his place on the bench and waiting for an opportunity.

“When I return to Madrid I want to have a chance to win a place in the team, to be a starter,” he said. “I don't want to be on the bench, in case somebody gets injured or something happens. I want to fight for a place. I don't want to be the new Casemiro, or the new [Toni] Kroos, I want to be Marcos Llorente.”

There is no doubt he is making an impact at the mid-table club and he has the profile that would interest a lot of Premier League clubs. Not just the North London club.

His Great-uncle would be proud. Llorente has an elegant and stylish look about him on the pitch. He never looks rushed, never looks flustered and his sweeping blonde hair is rarely unruffled. Ever since coming from the Real youth teams and the Castilla squad, he admits that his defending has massively improved.

“Typically I didn't help the defence as I was more interested in attacking. Now, I'm happy to be amongst the best interceptors because I used to be too little and had defensive problems until I had a growth spurt. In the Juvenil and Castilla teams, I improved a lot defensively.”

Helped by his big, spidery legs, Llorente tries to stay on his feet as much as possible. He is strong and uses his frame to get in front of the ball, get in between the ball and the attacker. Breaking up the play as much as he can.

In tight situations, he has shown quick feet to get out of danger and then he quickly gets his head up to pick a quick pass. With a superb right-foot, he has that look of former Liverpool hero, Xabi Alonso, someone who has inspired the midfielder.

“When I trained with the first-team I focused a lot on Casemiro and Toni Kroos, but I've always noticed Xabi Alonso. I like to play ahead of the backline, using the ball, and helping the defence. My uncle [agent Julio Llorente] told me to learn from Alonso.”

Llorente’s passing and reading of the game has elements of the former Real Sociedad midfielder, but the 21-year-old is taller, he is stronger and has a whole other dimension to his game. Even from behind, his long legs allow him to nip in and get a touch on the ball.

One thing he does really well quite often is stay on his feet. Rather than dive in, he stands tall and make the attacker make a decision. Forcing the mistake. Against Espanyol, there was a great example when Jose Antonio Reyes was trying to hit on the counter, Llorente held his ground, the former Arsenal man had to turn back and that helped Cristian Espinoza get back and Reyes was forced to go all the way back to his own defence.

This is the type of action that isn’t picked up by statistics. He’s not made a tackle, or intercepted a pass. He’s stopped his opponent hitting on the counter, delayed the attack and then rushed back into his position. A clear sign of intelligence and an excellent young prospect.

Able to play anywhere in front of the back line, he is a true protector, but, like any young player, he still has his flaws. Even with his long limbs, he can be too keen to try and get a touch on the ball. Rather than just hold his position, waiting for a better opportunity, he’ll go in and either get beaten of inflict a foul.

Against Sevilla it was the former that helped their opponents open the scoring. Paulo Henrique Ganso held control of the ball on the edge of the box, Llorente rushed and although he nearly got a foot on the ball, he left and opening and the Brazilian managed to pull off a back-heel pass to Wissam Ben Yedder. The Franco-Tunisian forward applied the finish.

In that case, it would have been better for the youngster just to hold his ground and force the attack to get around him. Something that is often a very difficult task. The positives do outweigh the negative aspects of his game. He leads Alavés in tackles made, at 2.5 interceptions per game he is second in his club.

Llorente completes 88.3% of his passes, but with 6.4 long passes completed per game, it’s not just easy short balls he is attempting. His head is always up quickly, looking for the right pass, not just the most basic option.

Despite the stories suggesting that Wenger will do whatever it takes to land the young Spaniard, it’s hard to see any deal happening soon. The player dreams of following his family’s footsteps and playing for Los Blancos at the highest level.

The Gunners also have Francis Coquelin, Granit Xhaka and Mohamed Elneny currently all playing at the club. However, that doesn’t mean Llorente would be an upgrade. Arsenal were linked with moves for Xabi Alonso when he was at Liverpool and the defensive midfield position is one that Wenger has struggled with throughout the last 10 years.

Perhaps, the heir to the Alonso throne, could be the long-term option for Arsenal, but only if they can convince him to give up the family dream.