It's been pretty much the perfect season for Chelsea. After last year's disappointing 10th place finish, they have been crowned Premier League champions and could make it a double with a win in the FA Cup final, where they face Arsenal.

The worst thing any team can do is rest on their laurels, evolution is progression and you need to be constantly looking to strengthen and improve. With that in mind, Antonio Conte will already have a good idea of the type of players he wants to bring in this the summer.

The Italian boss has done amazingly well to implement his 3-4-3 system to the Stamford Bridge side, but now he’ll want players to take that further, especially with the UEFA Champions League coming next season.

One player that has been mentioned in the past, which has resurfaced recently is that of Paris Saint-Germain midfielder Marco Verratti coming to Stamford Bridge. The story seems obvious. An Italian, looking to eventually step up his game, linked with playing under his countryman, however, it’s not that simple.

Verratti is under contract at the capital club until 2020 and when he signed the new deal last February, he had no imminent plans on leaving Paris.

“I am really happy and grateful for the confidence placed in me,” the 24-year-old told the club’s website:  “I love Paris and I love PSG.”

“I want to continue to give everything, along with my team-mates, to make these fans happy and to convert the club into the best in Europe.”

That task became a much tougher prospect this year as PSG were spectacularly knocked out of the Champions League after than infamous Barcelona comeback, while it was confirmed this week that Monaco have won Ligue 1, making it the first time since the 2011/12 that the club from the French capital haven't won the title.

PSG’s demise and Verratti’s ambition could convince him to leave the French club in the summer and undoubtedly there would be a queue of clubs willing to go big to lure the Italian.

Conte’s position as the former Italy boss is not something that is actually going to favour him in the pursuit of Verratti. The midfielder made his national team debut in 2012, playing 31 minutes against England. It is almost criminal that a player of his ability has only 21 caps for his country.

Eight of them came before Conte and six came afterwards. That means he was only on the pitch seven times in two years for the Chelsea boss. Injuries played their part, Verratti missed the 2016 European Championships with a groin injury, but that’s just half the story.

For five squads, he wasn’t picked, he was an unused sub against Norway in Azerbaijan in 2014, with Conte preferring players like Mirko Valdifiori, Roberto Soriano, Marco Parolo and Riccardo Montolivo to try and replace Andrea Pirlo.

Verratti is the type of player you build your squad around and you would hope and give Conte the benefit of the doubt that the little midfield general would have played a huge part in his countries plans this summer.

Although, it turns out the player is a big fan of the Chelsea boss: “I believe Conte is the best coach I have ever worked with,” he told Sky Sports Italia. “He is a tactician who really focuses on the details and knows absolutely everything about his opponents.”

It’s clear to see why the Chelsea boss would be interested and why the player could be convinced to link up with him again. 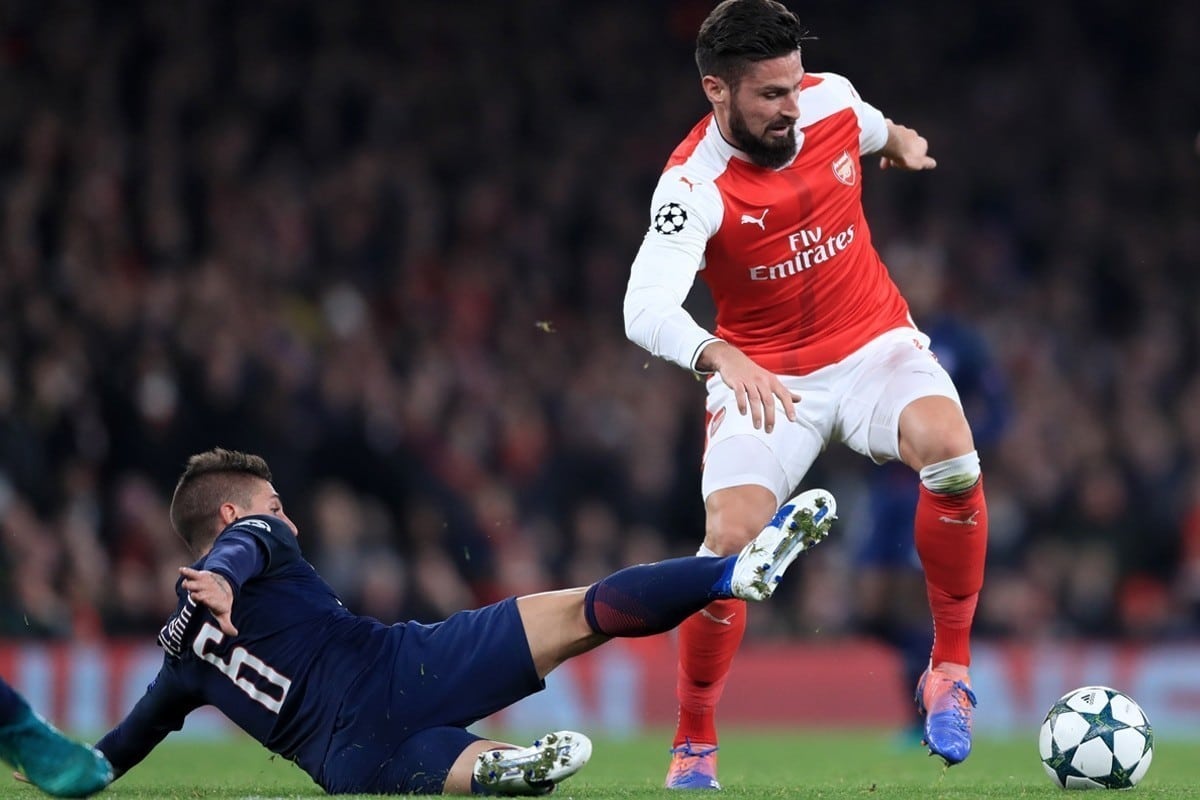 Verratti, in a similar way to N’Golo Kanté, plays like multiple players when controlling the midfield. He’s tenacious and a fighter. Rarely does he give up a fight, which can lead to a few yellow cards. Always go early in the Verratti yellow card sweepstakes.

It’s an area where he has massively improved over the last two seasons. In his first three years, he picked up 32 cards, but now, in 28 Ligue 1 games, he has just six cautions.

That’s not to say he has given up on the defensive side, he averages 3.3 tackles per game – that’s just below Kante's 3.6. Unlike the former Leicester City midfielder, Verratti isn’t looking to intercept the danger, for someone so small, he’s a flat track bully.

Any move to Chelsea would be to play alongside Kanté, so he would be replacing Nemanja Matic. Not as imposing physically as the Serbian – Verratti is listed as being 26 centimetres smaller – but he is a bulldog, a warrior and a definite fighter. No team would be able to compete with Conte’s side in terms of effort with those two in the centre.

Absolutely love Marco Verratti. @ChelseaFC should break the bank to get him. #gamechanger pic.twitter.com/LdxaFvOBKQ

One area of Verratti’s game that has come under criticism is his attacking contribution, yet he makes more key passes per game (1.6) than Matic (0.7), but with Eden Hazard, Willian and Pedro in front, and the wing-backs bombing forward, that wouldn’t be an option.

In simple terms, Verratti combines everything that is good about the options Conte currently has, but in one very talented player. He has the poise and passing ability of Cesc Fàbregas, the fight and presence of Matic and the defensive prowess of Kante.

A very powerful runner, he is excellent at winning the ball, using his technique to turn and his determination and drive to create counter-attacking opportunities. For Chelsea, and the options they have in the final third, he would be the perfect fit.

When he was linked back in December, Chelsea fans may have been interested in just how important he was and he would have proved it. As PSG lost 2-1 away at Guingamp back then, Verratti made 153 touches. An incredible amount and a clear indication of just how vital he is to everything Unai Emery’s team create. He may not pick up the assists or contribute goals, but he is the heart of that team.

In Chelsea’s win over Crystal Palace on the same weekend, Matic and Marcos Alonso led the team with 68 touches. Even when they dominated play against Everton in the 5-0 win earlier in that winning run, it was César Azpilicueta with 109 who topped the charts. Matic made 91.

Don’t let the fact that Verratti plays in Ligue 1 influence what you think of his domination of the ball. Even against Arsenal in the Champions League, the little Italian managed over 100 touches in both games. 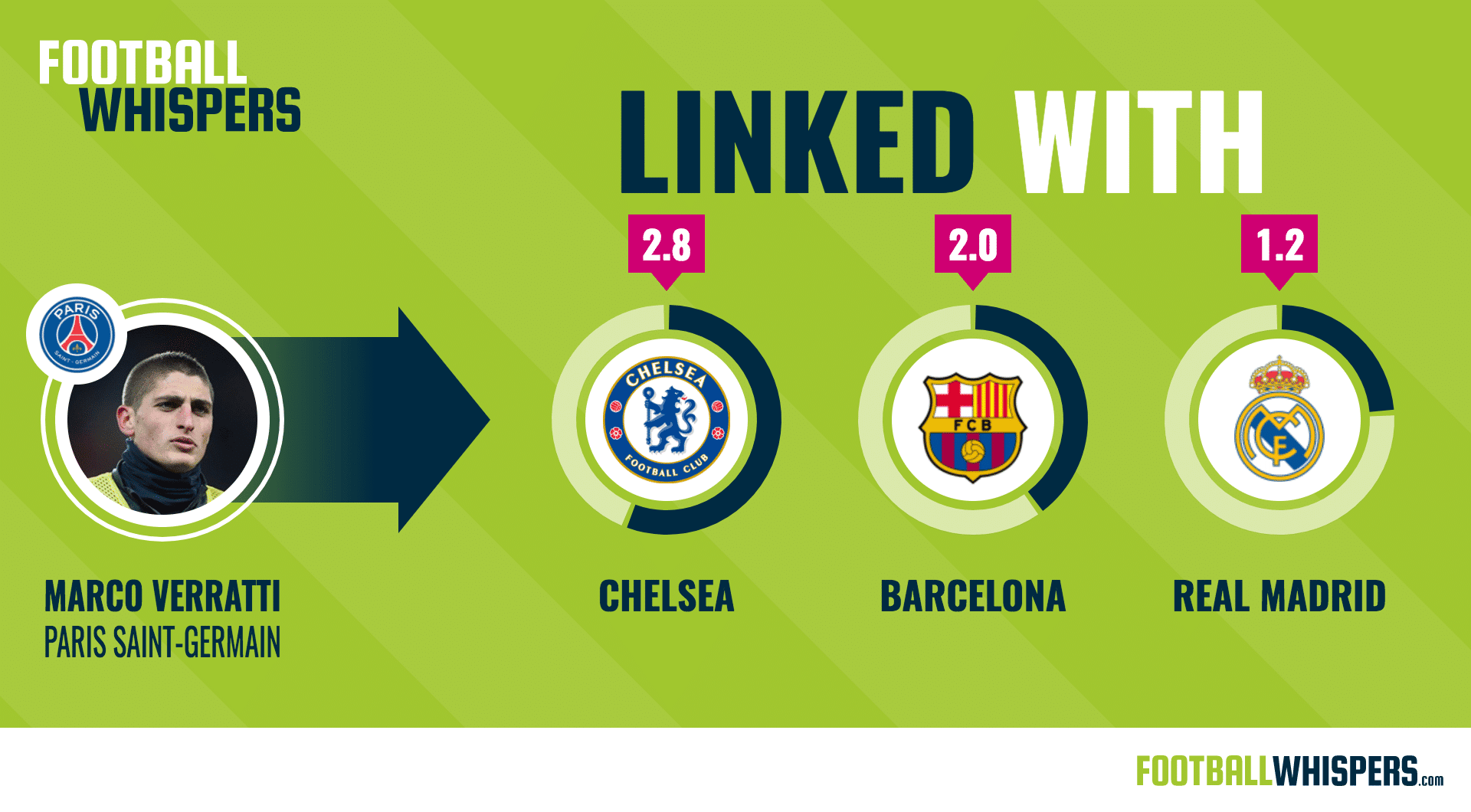 In the home game, he had two key passes, only Angel di María had more, but then lead the team in tackles made…whilst also picking up two yellow cards. The second was later rescinded. At the Emirates, in the return game, he had 123 touches, lead his team with four key passes and three dribbles completed. He also made two tackles, two interceptions and scored an own goal. Safe to say he had two very busy nights.

He has proved himself very capable at the highest level and at 24 years old, is about to hit the peak of his career. Chelsea would be smart to make a move before someone else does. However, one issue will be the amount it will cost to prize him from PSG.

The reported £55million fee is still probably far away from what they would expect. Verratti is PSG’s crown jewel; he is the cornerstone of their team and they are in no position to be bullied over a fee.

With his position in the team and what he means to PSG, you are looking at Paul Pogba type numbers in terms of convincing the Ligue 1 champions to sell. This is not going to be done on the cheap, but he will be worth every penny if he takes Chelsea to another level.