Fabio Capello is an excruciatingly stern human being. He is a man whose predominant facial expression, throughout both his playing and managerial career, suggested that the sun was constantly glaring directly into his eyes.

Tough, scrupulous and unwavering, his emotional state seemed to hover between emotionless and extremely angry. However, there was one moment that brought out his softer side, something that before and since has generally remained hidden.

It was 18 August 1995 and Capello's AC Milan were playing Juventus in the Trofeo Berlusconi – an annual friendly match named after the club’s president, Silvio Berlusconi, and in honour of his father, Luigi.

As the players came out of the tunnel to begin the match, they were joined by Marco van Basten. The Dutchman was saying goodbye.

After eight years with Milan, the striker, aged 30, had been forced into retirement by a crushing series of injury problems. Bidding his farewell, he came out on to the pitch with his former colleagues, shook hands with referee Pierluigi Collina and waved out to the San Siro masses. The crowd responded by standing and applauding. A banner hung by the tifosi read: ‘Grazie Marco per sempre Rossoneri' (‘Thank you Marco forever Milan').

As van Basten took in the adulation, Capello was overwhelmed. The Italian could not help but cry, clapping momentarily before sinking back into his seat in the dugout and raising his right hand to stem the flow of tears. The enormity of the injustice – that a player so great should have to end his career so soon – was too much to handle.

Born and raised in Utrecht, van Basten began his footballing path with local side UVV, before moving on to USV Elinkwijk. However, by 1981, by the time he was just 17 years old, he had attracted the attention of domestic giants, Ajax. Kings of their continent throughout the 1970s, the legendary Amsterdam club wanted to make the player their own. They succeeded. 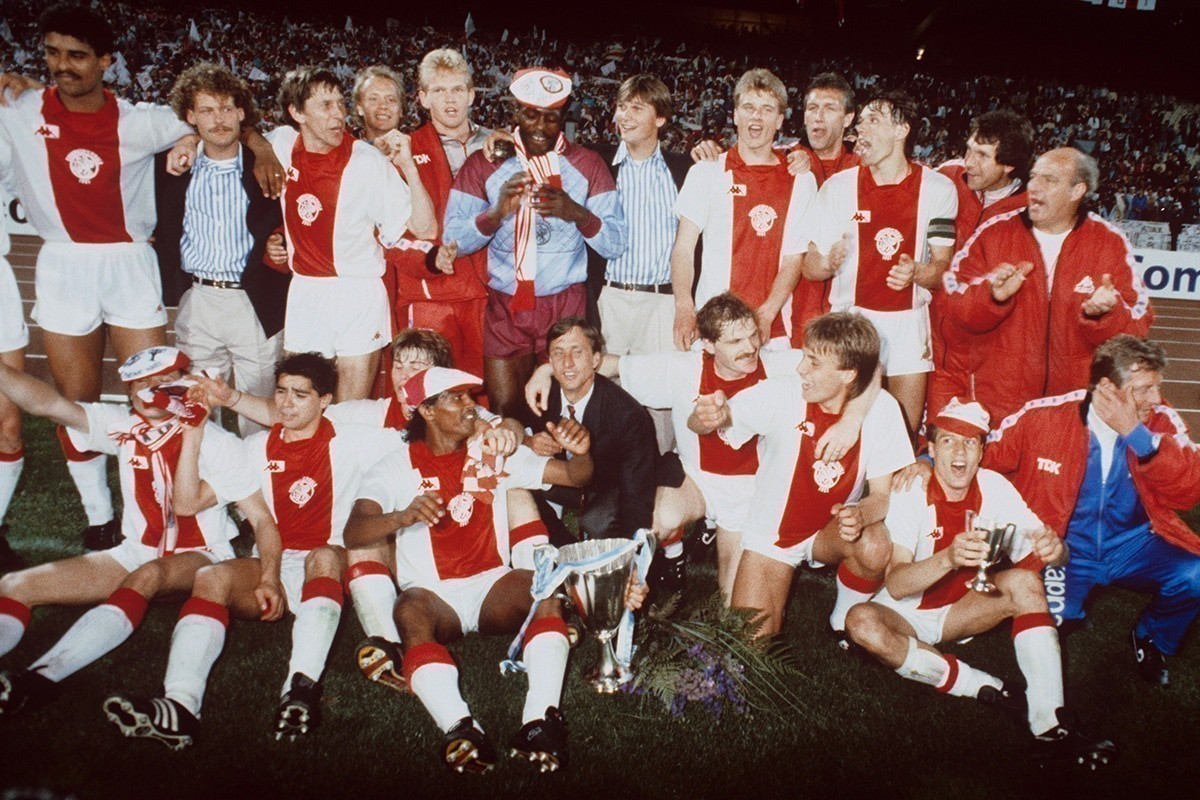 A precocious young footballer, van Basten's early years had been filled with fantasies of participating in an entirely different sporting arena. “My first dream as a young boy was to be a gymnast,” he told the Daily Telegraph in 2002. “I think my gymnastic background helped a great deal with my agility when I took up football seriously.”

Certainly there were elements of the gymnast about him, most obviously in his grace, balance and poise. A world class footballer he may have gone on to become, but the young van Basten’s dreams were fulfilled, in a sense, within his chosen profession.

He stood a thin and lanky 6’ 2”, but the physique merely hid the acrobat beneath. Every so often, his hidden acrobatic desires would manifest themselves openly in the form of an exquisite overhead kick.

He was able to satiate another of his childhood dreams while playing for Ajax, working with one of his sporting heroes.

Johan Cruyff and ‘Total Football' had reigned supreme throughout van Basten’s youth and, while he was only eight at the time of Ajax's and Cruyff’s third consecutive European Cup success in 1973, the principles of that great team were embedded deep within Dutch football.

An awareness of space, intelligent movement and positional fluidity were core to the philosophy and van Basten was unable to avoid its teachings.

While ultimately he was a specialist – his touch, composure and precision were at home in and around the penalty box – he revelled while playing for Cruyff between 1985 and 1987. In the two seasons prior he had established himself as a fine finisher but, under the influence of an icon, he found the net an incredible 80 times in 72 appearances in all competitions.

International recognition came in 1983 under tutelage of the architect of ‘Total Football', Rinus Michels – and van Basten would go on to leave his own unique imprint on the game as part of the Oranje ‘class of '88' at the European Championships in Germany.

Having begun the tournament on the bench, watching on as the Netherlands lost 1-0 to the Soviet Union, Michels threw the youngster into the starting line-up for the next game against England. 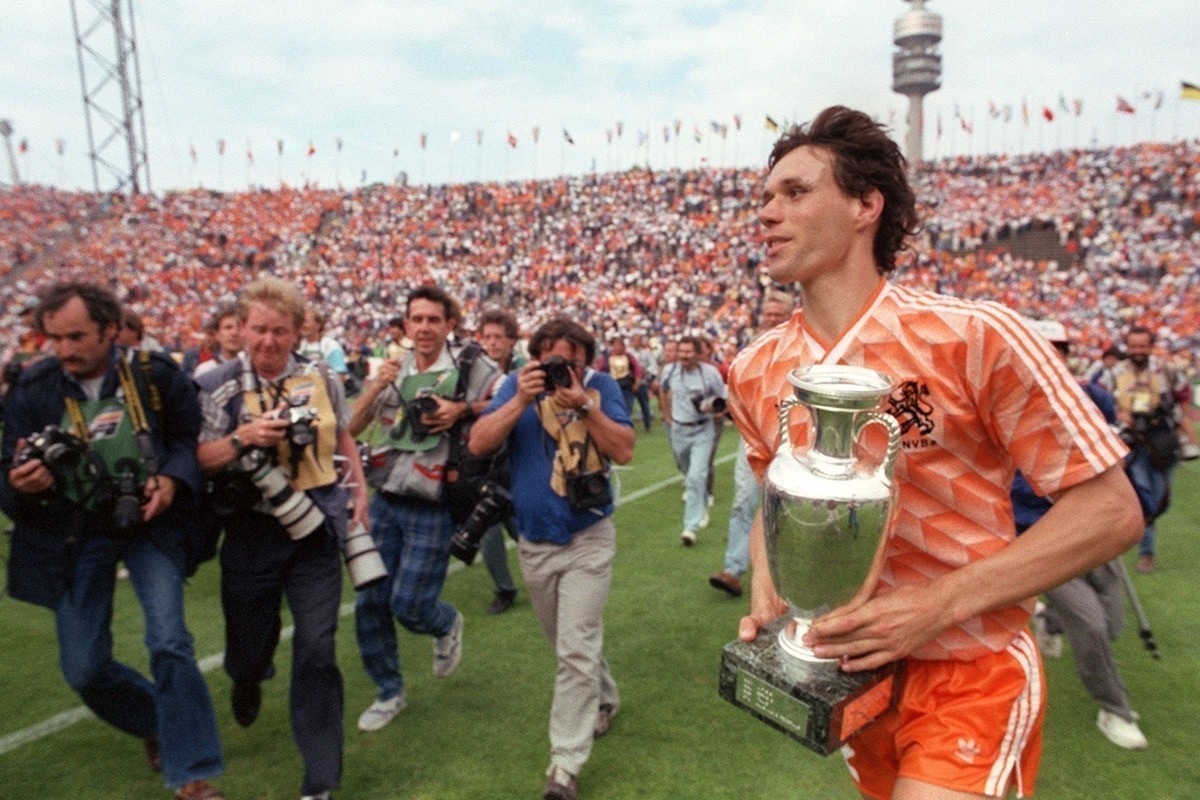 An immaculate hat-trick followed to secure the Dutch a 3-1 win. Then, in the semi-finals, van Basten won the penalty to enable the Netherlands to equalise against Germany before sliding in to score an 88th-minute winner to secure a place in the final against the Soviets.

Then came that goal…

The pass was seemingly endless. Arnold Muhren had done his team-mate no favours, sending him deep and wide towards the edge of the penalty box. The midfielder had hit a cross so high as to be almost interminable; for a brief moment it felt as if the ball would not return to the field of play.

Only one thing could save Muhren’s face now. For him to hit that bad of a pass, something stunning had to follow in order to reconfirm that he was in fact a Dutch footballer of Ajax schooling and not some impostor. He was in luck.

Refusing to give up on his friend, the Netherland's No.12 studied that horrendous, endless cross until it dropped out of the sky. He stood firmly by Muhren, calculating exactly how much time remained for the ball to land, where his right foot needed to be in order to connect with it perfectly, and what body position would be best so as to fire it from an impossible angle into the net beyond Rinat Dasayev – one of the finest goalkeepers ever to come out of Eastern Europe.

He then performed every single necessary action in order to realise the goal. Here again was the budding young acrobat.

That audacious strike, all the more audacious considering its executor had been a substitute less than two weeks previously, naturally became the defining moment of van Basten’s career.

However, by that point he was already a Milan player, and he was already working miracles on a weekly basis, scoring goals with unerring frequency within the defensively rigorous confines of Italian football.

He and his Dutchmen, Ruud Gullit and Frank Rijkaard, were part of a footballing revolution under Arrigo Sacchi – the coach's radically proactive style of play built on zonal marking, pressing and a finely tuned offside trap.

During his time with the Rossoneri, van Basten won the Ballon d’Or (European Player of The Year) three times, was voted FIFA World Player of the Year once and achieved Serie A's Capocannoniere (Golden Boot) in 1990 and 1992. In the process he helped the club to four Scudetti and two European Cups among countless other honours. 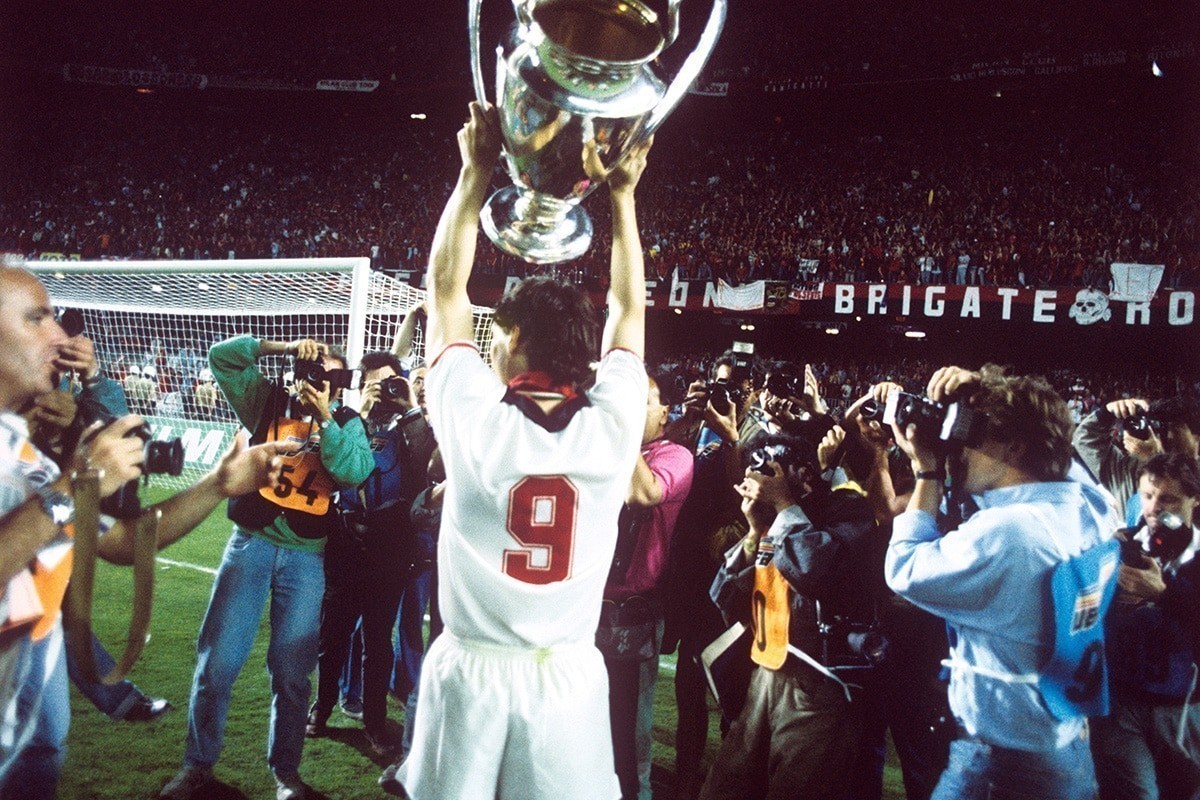 It was a time of great prestige for Milan, though van Basten’s involvement would be curtailed by an ankle injury that had first reared its ugly head during his maiden campaign in Italy.

Eventually, after numerous unsuccessful operations and two years on the sidelines, he decided enough was enough. In one of football’s most hurtful endings, a player whose greatest feats had been underpinned by an elegant flexibility had his suppleness corroded to the point of fragility. The acrobat could do nothing but hold his hands up.

On 18 August 1995 – the day that Capello cried – the Trofeo Berlusconi ended 0-0 and, for the first time in the friendly’s history, a penalty shoot-out was required to separate the two sides. That the match should end goalless was in its own way a sort of symbolic tribute to van Basten. One of the most prolific finishers of all time had just retired; it was only right that the nets remained untouched.