For Celtic, in the midst of chaos, there is opportunity.

On the surface, Brendan Rodgers' sudden departure threatened to derail the club's bid to win ten Scottish Premiership titles in a row. Instead, Neil Lennon can guide them to number eight and, while he's handling things on the pitch, the board have the chance to identify the ideal replacement for the now Leicester City boss.

The Bhoys are in no rush to appoint his successor. Plenty of names have been linked with the vacancy at Parkhead but perhaps the most interesting one of the bunch is Marco Rose.

The Red Bull Salzburg boss has risen through the ranks with the Austrian club and is now one of the most sought after managers in Europe. Understandably so, too.

The 2017/18 campaign was his first in charge of the Salzburg senior side. He guided them to a Europa League semi-final, narrowly losing out to Marseille in extra time, while winning the Austrian Bundesliga and finishing as runners-up in the cup.

Midway through the current campaign in Austria, Salzburg are dominant once again. They're 11 points clear of their nearest rivals and have suffered just one domestic defeat. Furthermore, Rose is showing the exploits in Europe last season weren't a one-off.

His side are into the last-16 of the Europa League and will face Napoli for a place in the quarter-final. That is after the Austrian champions finished top of a group containing Celtic and RB Leipzig.

In many ways, Red Bull Salzburg and Celtic are similar. They dominate domestic competitions, playing football ‘the right way' while developing younger players.

The one big difference, though, is where Rodgers failed to make an impact in Europe, Rose has managed to keep his side competitive against the odds with his innovative tactics.

The 42-year-old Leipzig-born coach is, on paper, the ideal manager for the Bhoys. He knows how to take an utterly dominant club in a domestic environment and make them competitive on a European platform, all while losing star players.

Here, we take a detailed look at what Celtic fans could expect from Rose if he was to call Paradise home in the near future.

This season, Salzburg have operated in a hybrid 4-3-3/4-3-1-2 shape. It differs depending on who is selected and who the Austrian champions come up against.

The front pairing is often made up of one target man – someone who can hold the ball up and bring others into play – and one nuisance, a player who won't let the opposition have a moments rest. Dabour and Prevljak fall into the former category while Gulbrandsen, Daka and Minamino are very much the latter.

The system can, however, morph into more of a 4-3-3 when Wolf takes up a position on the right side of the pitch and one of Gulbrandsen or Minamino drift left.

Unlike most modern-day managers, Rose doesn't look to dominate possession; Salzburg's style is similar to Hoffenheim's in the sense they like to flood the final third and their build-up play is very direct.

What often happens when Rose's men have the ball is the centre-backs split and the full-backs push on to play as wide midfielders. From above it looks like a 2-5-1-2 shape.

The centre-backs will then do one of two things. They either look to clip the ball into the channel for one of the forwards to attack or they play a long pass into a central area.

In the stills below you get to see the latter in action. 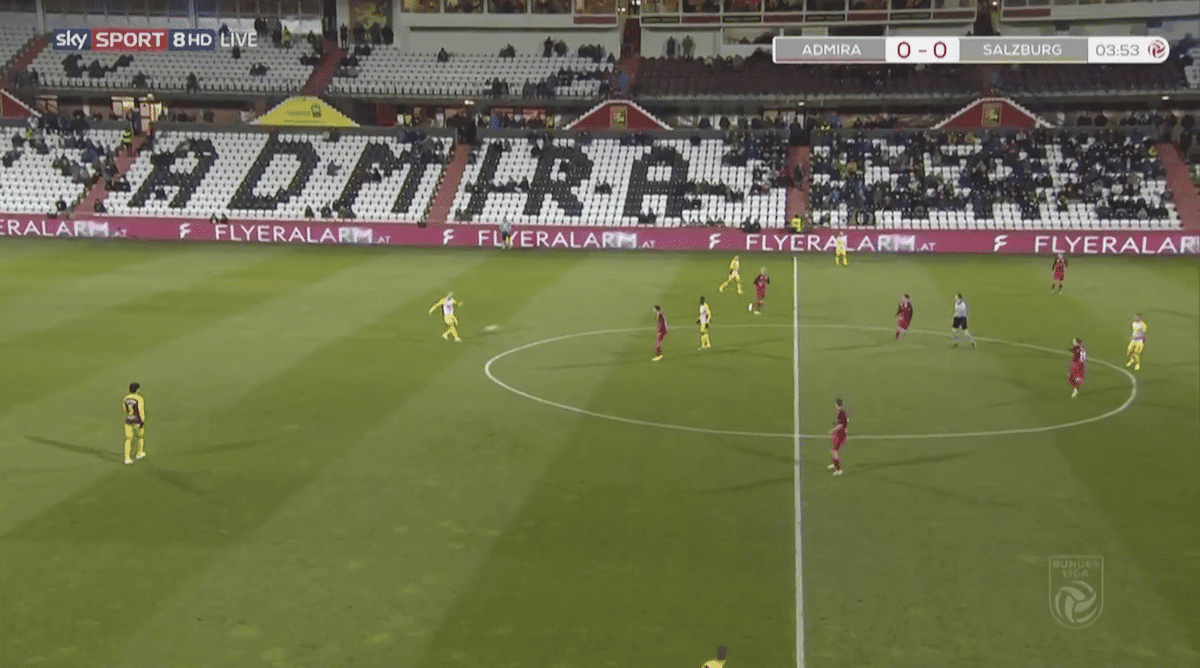 Admira are operating with a mid-press. They've pushed to the half-way line but aren't committing too many men into Salzburg's half. However, due to the lack of pressure on him, the centre-back is able to pick his pass forward. 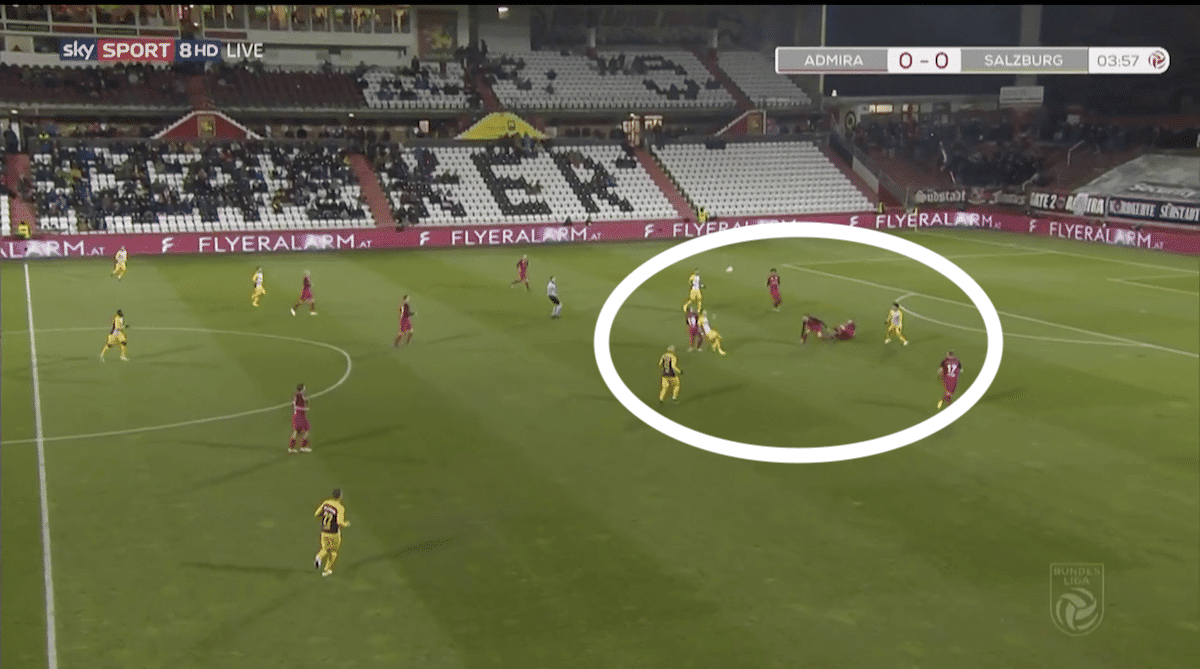 The home side win the first ball but the second phase of the attack is where Rose's team spring into life.

There are four players in close proximity to each other and they either collect any loose balls or swarm the opposition and win possession high up the pitch in the attacking third. It's gegenpressing at it's very best.

Though the tactic made famous by Jürgen Klopp is often associated with teams playing a high tempo game in general, Rose has tweaked it so that it compliments his side.

Transitional situations are orchestrated which allows Salzburg to press in dangerous areas. But unlike traditional long ball teams, the Austrian's have talented, creative players in the final third who can do a lot of damage when in possession.

Rose ensures his forwards are all confident when isolated. For example, they have to run the channels because their game plan often hinges on those players winning their individual battles. Daka, Wolf and Minamino can all do this when out wide.

Another trait of the Salzburg style is just how many bodies they commit forward. 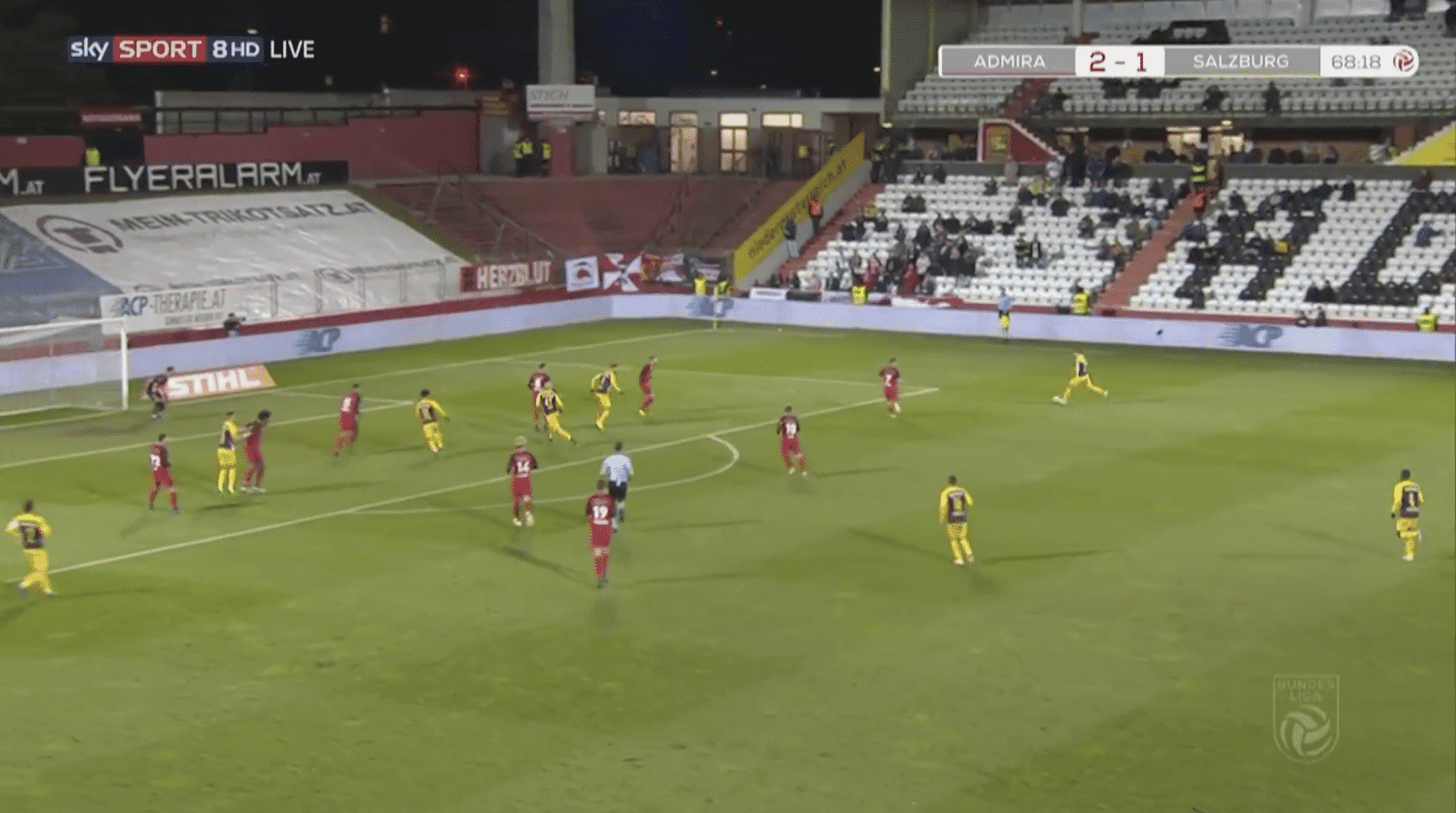 Celtic know first hand that the Austrians aren't against putting the ball into the area. But when you see how many players are actually in the 18-yard box, it's easy to understand why.

When the second ball is picked up after going long, they look to create an immediate goalscoring chance. If they aren't able to do that, they'll look to the full-backs.

The ball is worked out to them, usually in advanced areas as shown in the picture above, and Salzburg will flood the box.

More often than not when attacking in this way, the full-backs act as wingers and the attacking midfield and another midfielder, usually Xaver Schlager, make their way into the area to join the two forwards.

They're relentless in this approach and eventually wear down the opposition. And these tactics work across all competitions, no matter who they're up against.

There are several dominant sides whose coaches rely on star individuals instead of working on a system. Rose isn't that type of manager. It's why with him at the helm, famous European nights could once again return to Celtic.