Real Madrid have a future star on their hands.

If you didn’t know much about Marco Asensio before the Champions League quarter-final against Bayern Munich, you definitely do now.

He got the assist for Cristiano Ronaldo’s winner in Germany before inflicting the fatal wound to the dying Bavarian side in Madrid this week as Los Blancos progressed to the semis.

And Madrid-based daily Marca reports that the 21-year-old has asked for the No.10 shirt for next season to show his importance for Zinédine Zidane’s side.

We look at the rise of Asensio, and whether he is fit to wear such a mythical shirt.

While he may be catching the eye this season, it’s clear Asensio has been tipped for the top for a while.

And when Zidane tells you that you have the best left foot around since Lionel Messi, you know you’re set to be something special.

Asensio is the future.. he's so good

Born in 1996 to a Spanish father and a Dutch mother in Mallorca, it’s fair to say his parents put him on the path to football superstardom from day one, calling him Marco after the Netherlands legend Marco van Basten.

And even when he was a youngster, his mother thought he would one day end up pulling on the white shirt of Real Madrid.

When Asensio was presented as a Real Madrid player in 2015, president Florentino Pérez said: “Your parents met me 12 years ago in Mallorca and they told me: ‘President, this is my son Marco and one day he will play for Real Madrid’.”

That move to the Estadio Santiago Bernabéu came about after his impressive performances for Mallorca, where after debuting with the B team aged just 16, he progressed to the first team in the 2013/14 season at 17 years of age.

At the same time as Real were pursing Asensio, he was also a transfer target for Barcelona.

The Catalan giants put in an offer of €1.5million, which was rejected – he ended up moving to the Spanish capital for €3.5million in December 2014, staying with the club whose academy he came through until the end of the season.

But he was also making mark on the International stage too, named player of the tournament in the 2015 under-19 European Championship.

Asensio helped Spain to victory, starting all eight of his country’s matches and scoring five goals, two in the semi-final against France.

And that impressive showing helped him follow a well-trodden path, from Real Madrid to Espanyol and back again, which Kiko Casilla, José Callejón and Lucas Vázquez did before him. 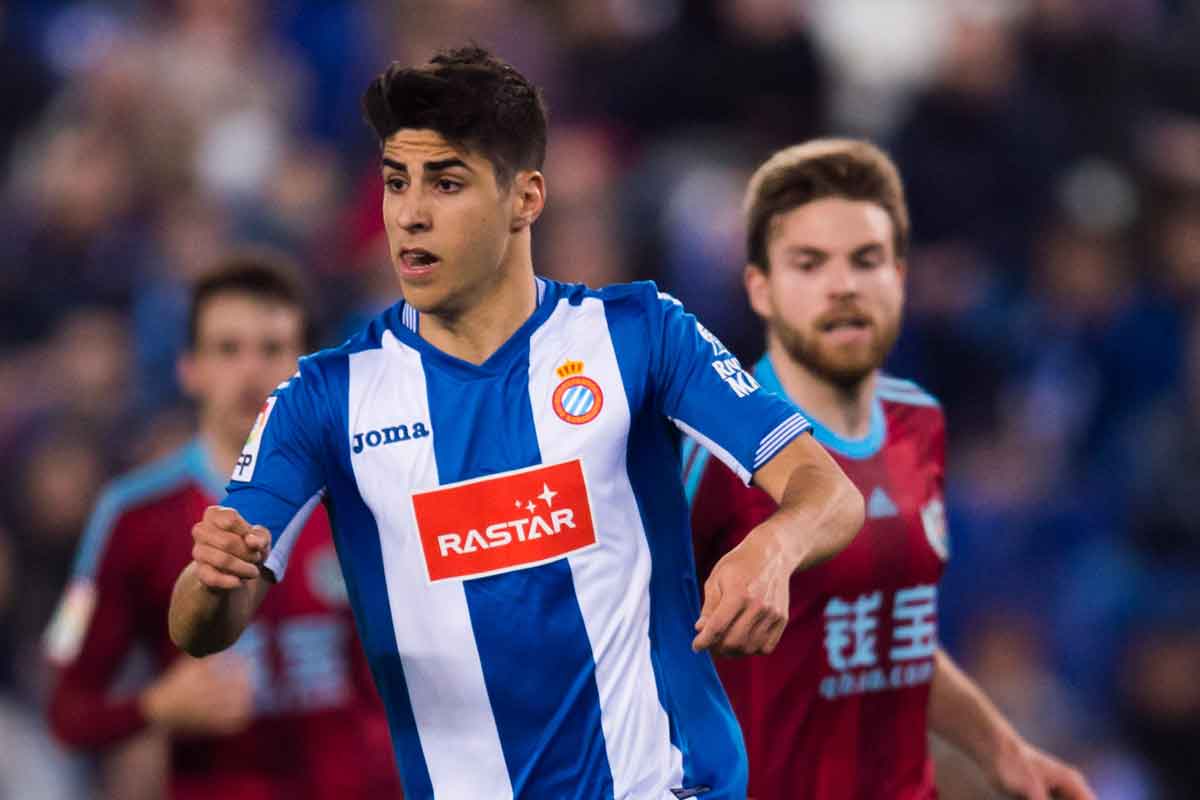 The loan further showed why Real Madrid were so keen to get hold of him.

He played in 34 out of 38 games as Espanyol finished 13th, notching up four goals and 10 assists, an impressive number when you consider that only Messi, Luis Suárez, Koke, Neymar and Ronaldo provided more LaLiga assists last season.

It was little surprise that his displayers caught the eye of Vicente del Bosque, who was then the Spain coach.

“He is the biggest talent in Spain,” he said.

“We were on the verge of taking him to the European Championship.”

While he didn’t make it to last summer’s Euro, he did make his senior international debut for his country in June last year in a warmup match for the tournament against Bosnia-Herzegovina.

And that saw him return to Real Madrid in the summer. 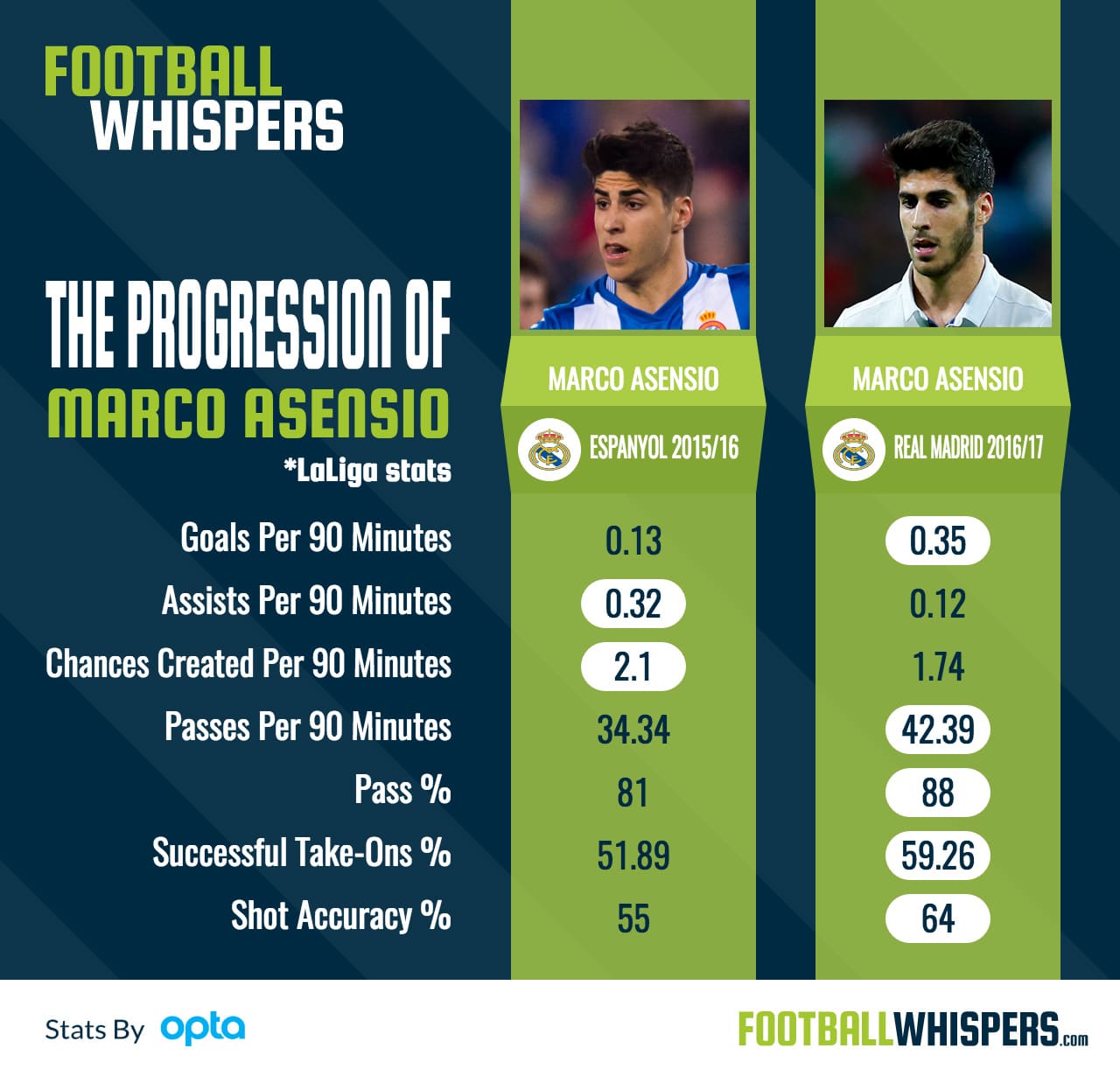 Taking his chances at Real Madrid

Since he returned from his loan at Espanyol, Asensio has gone from strength to strength.

While he was made just eight league starts (out of 17 LaLiga appearances), he has played in 29 games for Real Madrid this season, which really is not a bad number at all for a young player at one of the world’s biggest clubs.

While he may not be playing week in, week out like he was at Espanyol, the 21-year-old’s development does not appear to have been affected.

When he steps onto the pitch, he plays with the confidence of an established senior pro.

It’s no surprise he’s a Liverpool transfer target, with AS reporting this week that Madrid have turned down a €50million (£42million) bid from Jürgen Klopp’s side.

If you hadn’t heard of him but were watching Real Madrid against Sevilla in January, you would have been very impressed.

It was reminiscent of Gareth Bale’s goal against Barcelona in the 2014 Copa del Rey final.

He picked the ball up on the edge of his box before showing a surprisingly quick turn of pace to glide past the Sevilla defenders and score from just inside the penalty area.

But it is this month when he has really started to shine.

At the beginning of April, despite Álvaro Morata’s hat-trick, it was Asensio who was man of the match in Madrid’s 4-2 win over Leganés, running the show and dictating the tempo.

And he made the difference against in the first leg of Madrid’s Champions League quarter-final against Bayern Munich last week.

The former Mallorca player entered the fray just before the hour mark with the game scoreline reading 1-1.

Moments later Javi Martínez picked up his second booking after clipping Ronaldo and that’s when the away side started to turn the screw with Asensio key to this.

He completed 21 of the 23 passes he attempted, and kept play ticking over, working Bayern’s tiring backline.

As fellow Football Whispers writer Sam McGuire said: “He was neat and tidy in possession and looked like your stereotypical Spanish maestro.”

In fact Sam’s analysis of the winning goal, which Asensio assisted shows you just how good the 21-year-old is. 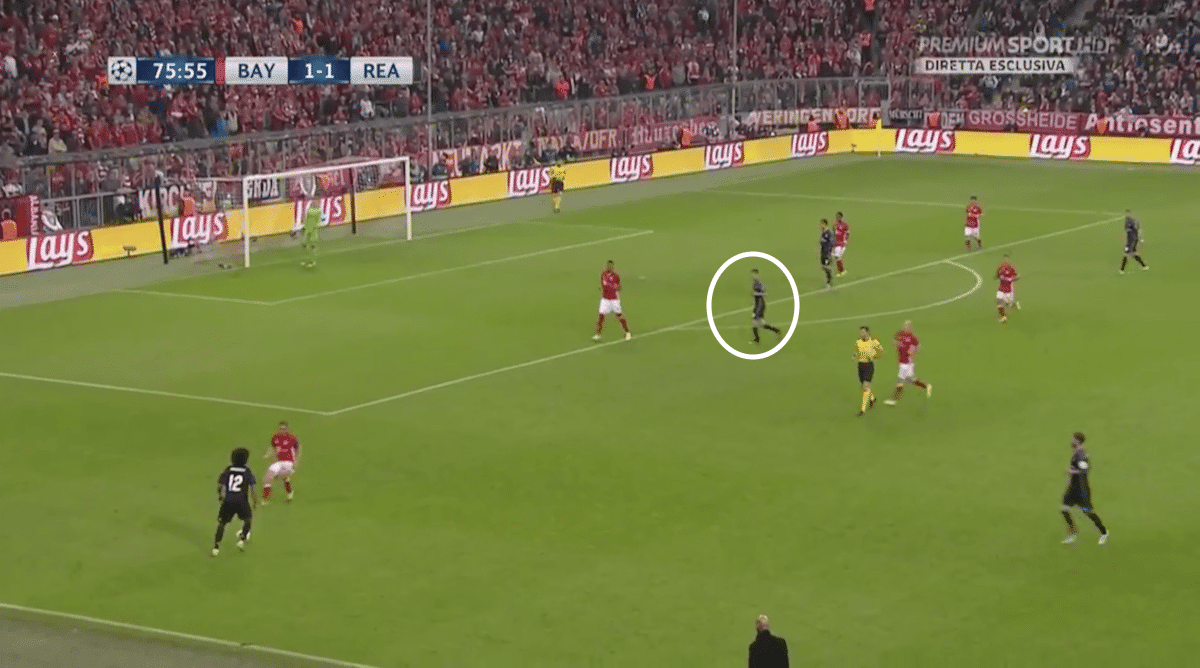 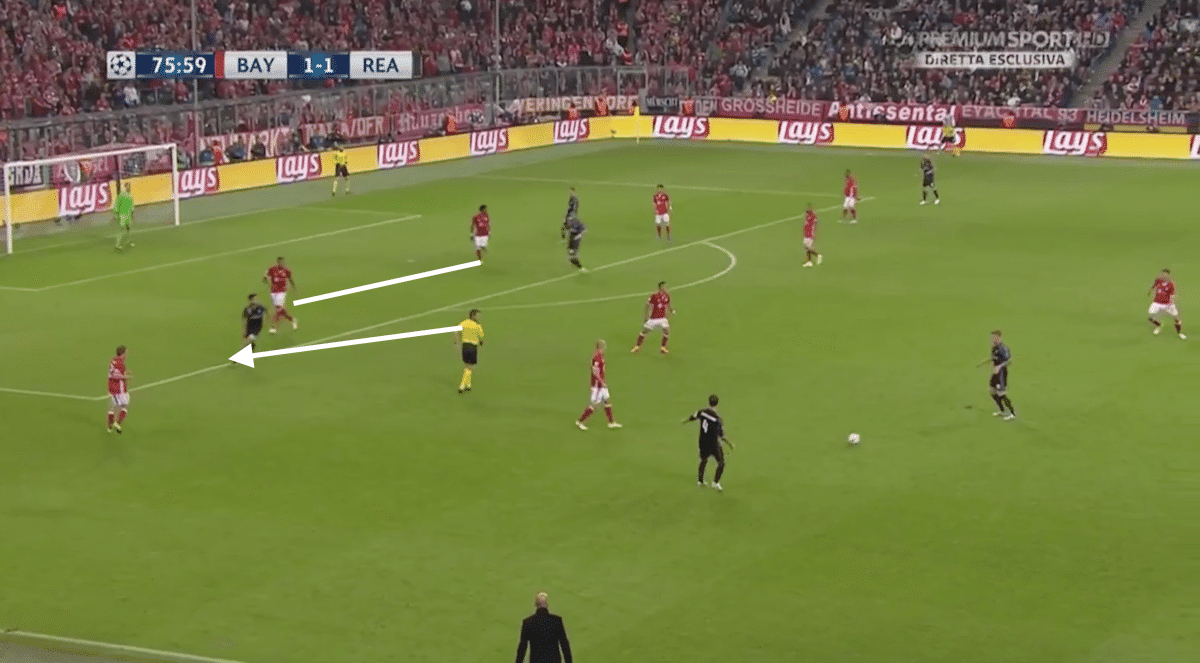 “Asensio, circled in white, is in the space between defence and midfield. As the play progresses down the Madrid left he makes a burst into the space behind Philipp Lahm, after the German pushes wide to press Marcelo.

“Sergio Ramos fails to play the pass despite seeing the run but, Asensio’s movement stretches the Bayern defence. Jérôme Boateng is forced to go with the attacking midfielder and this drags him away from the central area he usually patrols. It leaves Ronaldo and Karim Benzema two vs two against David Alaba and Juan Bernat in the penalty area.  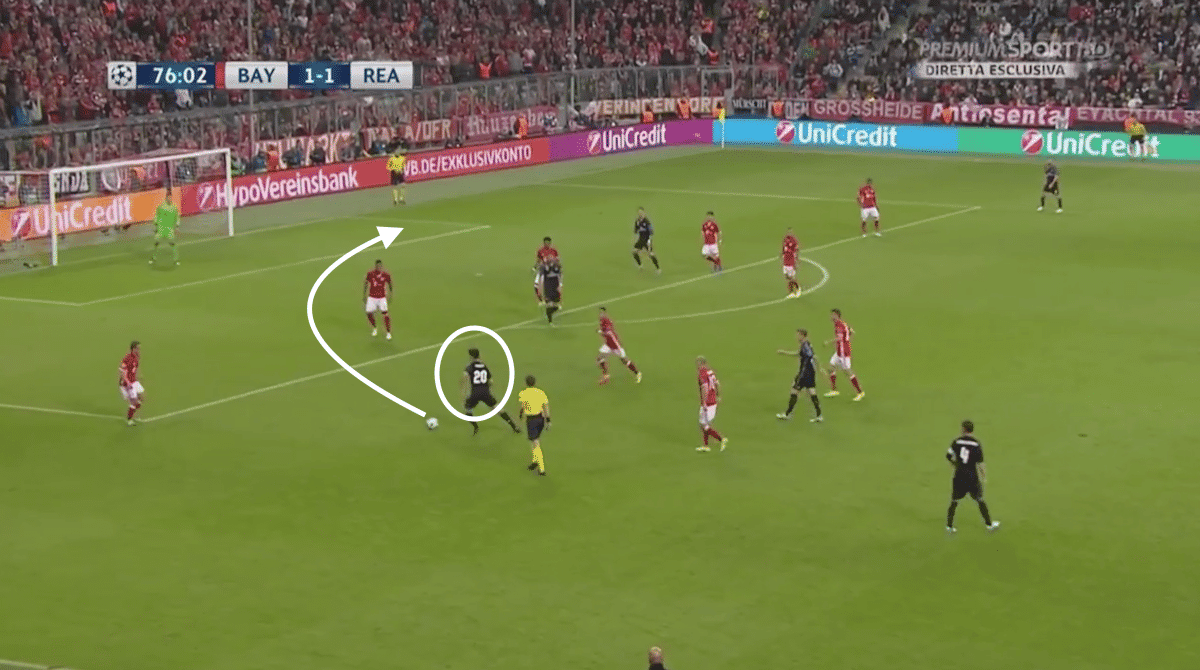 “He doesn’t receive the initial pass but this doesn’t stop Asensio looking to get involved in the next phase. He drops into the space ahead of the defence yet again, and this time Boateng doesn’t track him. He’s able to pick the ball up, turn to face the Bayern goal and get the ball onto his wand of a left foot. He then makes the most of a disjointed defensive line to put a ball into the area which Ronaldo finishes.”

And the Reschke well and truly knew that on Tuesday when, after coming on for Benzema in the 64th minute, Asensio sealed Los Blancos’ victory with their fourth on the night with a lovely solo effort, again starting in his own half.

His cameo, including the goal, showed exactly what he can do – he had three shots, all of which were on target, while he completed 22 out of his 26 passes and two out his three take-ons.

And if for someone on the verge of being a galáctico, wearing the No.10 shirt at a massive club like Real Madrid would be a huge honour.

But actually if you look at the last few people who have worn that shirt, with the incumbent James Rodríguez included, it’s not brought too much luck. 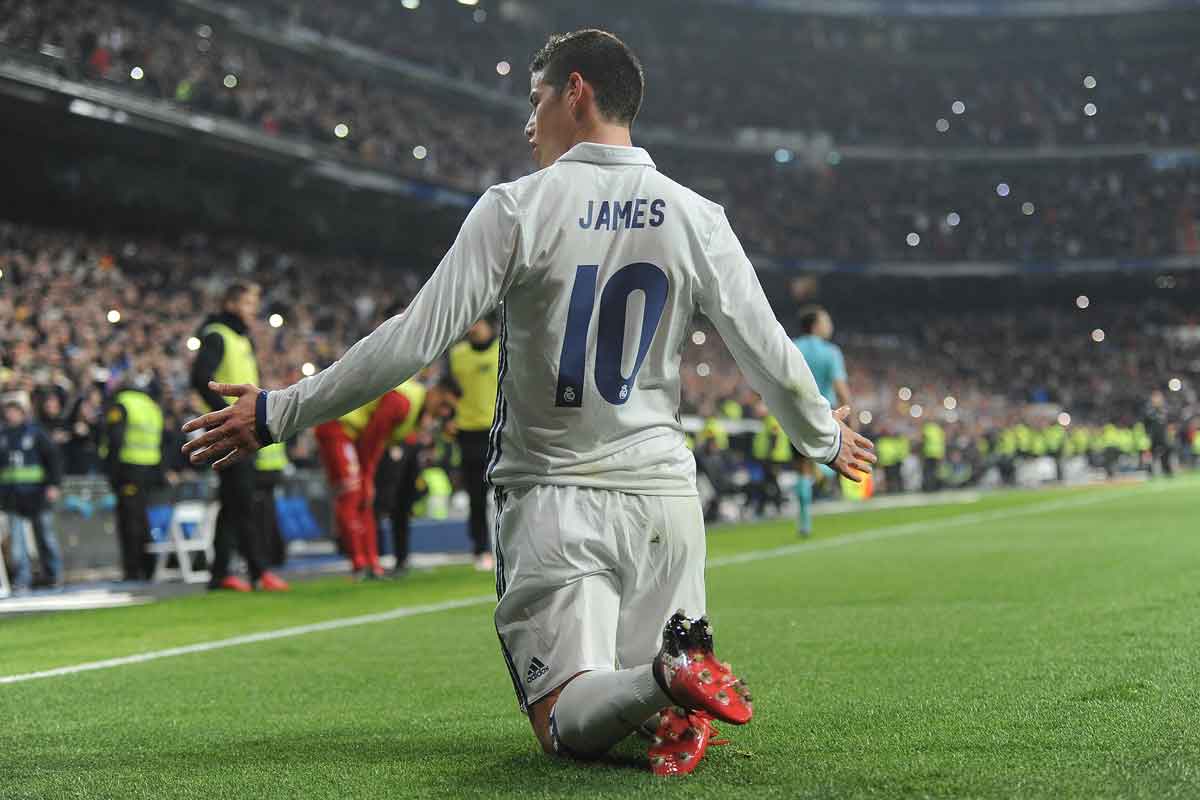 READ MORE: Does James Rodríguez Have A Future At Real Madrid?

Mesut Özil before him was good but never world class, while Lassana Diarra wearing that number is a bit of a joke.

Wesley Sneijder was sold after his one season wearing it, while Robinho failed to live up to the hype surrounding him.

In fact, since Luis Figo left the shirt at the end of the 2004/05 season, no-one has really lived up to its billing.

But in Asensio, they may have a future galáctico ready to emulate the Portuguese legend rather than the likes of Özil, Sneijder and Diarra.