Spain have managed to perfect it; the country churns out elite-level deep-lying playmakers-cum-ball-destroyers at an alarming rate.

Xabi Alonso gravitated more towards the former as opposed to the latter as he was pre-Sergio Busquets. But since the La Masia graduate burst onto the scene, Spanish clubs have had a blueprint for success and many have followed it closely.

Rodri, for example, didn’t let the weight of being labelled the ‘new Busquets’ weigh him down and has since made a £65million move to Manchester City. He is viewed as the long-term replacement for Fernandinho at the base of the Premier League champion’s midfield.

Next in line and tipped by many to battle it out with Rodri for a starting berth in the Spain midfield when Busquets does call it a day, is Espanyol's Marc Roca.

Given an opportunity by former Watford manager Quique Sanches Flores in August 2016, the Barcelona-baed club finally had a midfielder who could rival those starring for Catalan neighbours Barcelona.

Spain U21's Marc Roca is one of the best young deep-lying midfielders in the world, he also comes off as a really smart kid. He gave an interview to @el_pais where he talks about the tactical intricacies of his role & the importance of instinct – I translated some of his quotes. pic.twitter.com/AnaRzoMSSb

Roca was immediately linked with moves away from the RCDE Stadium, with Liverpool and West Ham United reportedly interested in the then 19-year-old. However, the youngster penned a new deal with Espanyol and went about making himself a key cog in the Periquitos’ midfield.

Fast forward almost three years and the 22-year-old is heading into the 2019/20 campaign as a champion having helped Spain to the Under-21 European Championship. He starred at the base of the midfield alongside Tottenham Hotspur transfer target Dani Ceballos and Napoli man

Ceballos and Ruiz claimed the headlines with their performances in the final third but it was Roca who orchestrated everything good Spain did. The metronome in midfield, he looked like a hybrid of Alonso and Busquets.

His short-game was there to be marvelled at. Roca would smother the opposition quickly for La Furia Roja, claim the ball back and then spray a cross-field pass with his wand of a left-foot with unnerving accuracy.

He really has got it all… and then some.

Bayern Munich are reportedly keen on him having missed out on Rodri. After stepping up in a Spanish side littered with potential stars Roca showed that when surrounded by quality he doesn’t look out of place. It’ll no doubt attract a number of Europe’s elite who know he isn’t simply a big fish in a small pond. 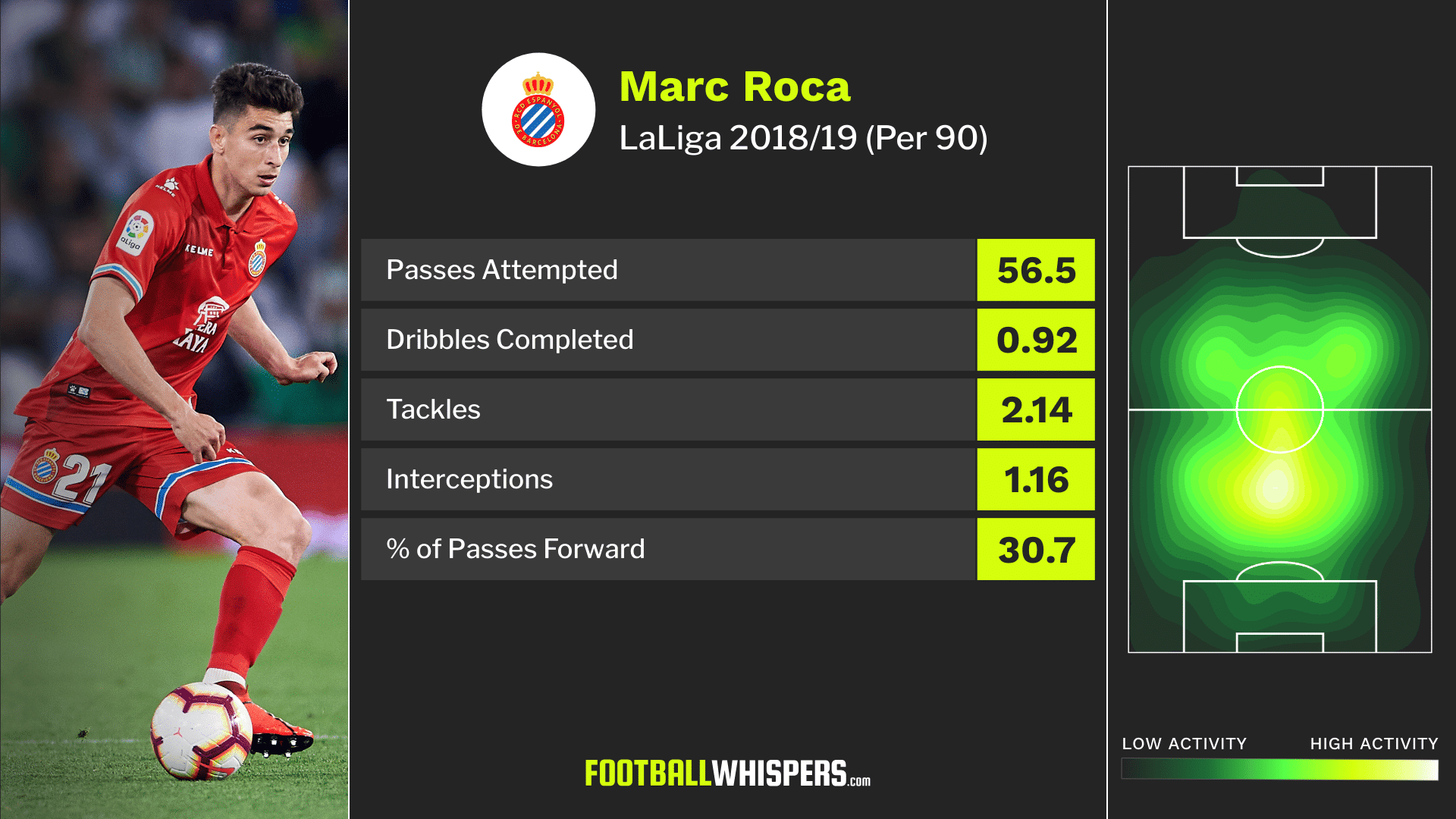 It’s easy to understand why Roca is so highly rated.

His technical ability is phenomenal, his vision is extraordinary and is only matched by his execution. Though primarily left-footed he’s not averse to using his right foot and this adds another dimension to his game.

Though not a ball carrier, his ability to create angles for passes and use either foot means he’s press-resistant. He always able to get a pass off, to progress the ball.

Roca is an instigator and a facilitator. An ideal combo for a modern-day midfielder.

His heatmap (above) is a perfect example of Roca as a player. One who dictates play from the middle third. He doesn’t venture too far forward or into wide areas like others who operate in a similar role. Perhaps in a more expressive team, he’d find himself in advanced areas but it’s not a necessity.

He’s used to seeing a fair amount of the ball. The 22-year-old averaged over 50 passes per 90 last season, with everything going through him as the creative hub for David Gallego’s men.

He’s not a dribbler, as alluded to earlier, but his use of possession and the speed in which he operates means he doesn’t have to be. Of his 56.5 passes per 90, 30 per cent of them go forward. It highlights how incisive he is when in possession. 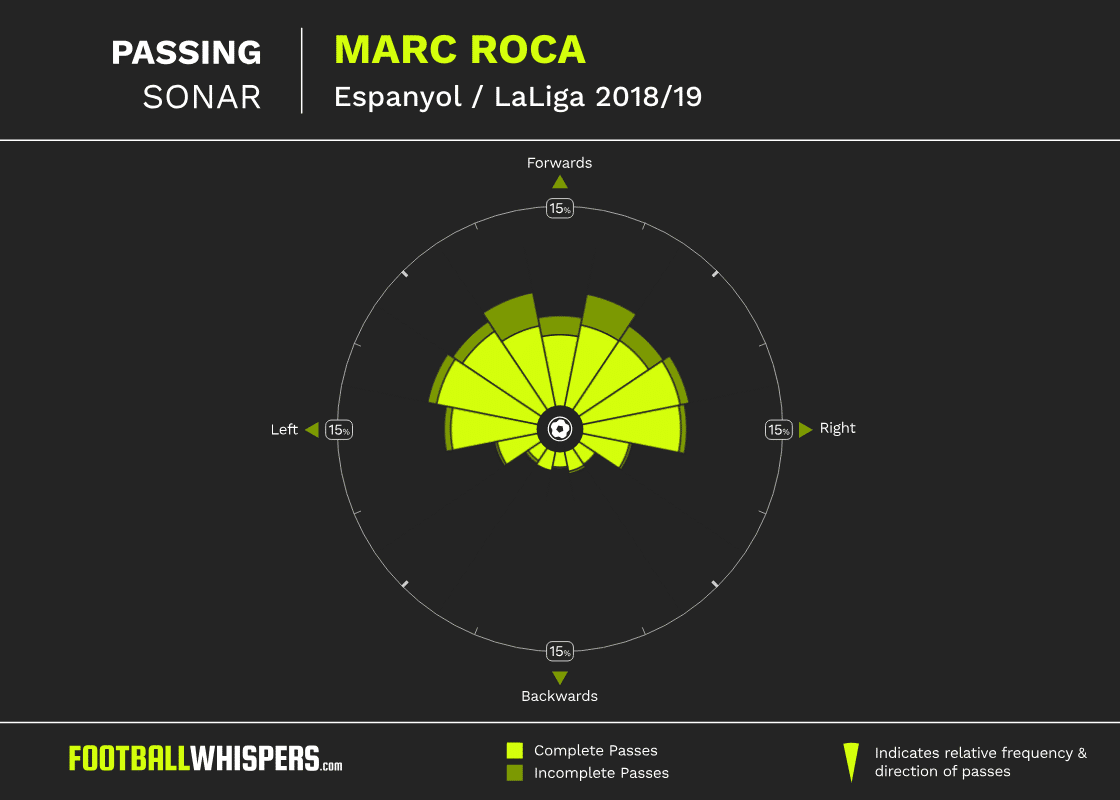 He’s busy defensively and very diligent, involving himself in 3.3 tackles and interceptions per 90. Roca is not averse to putting in a shift to help the defence either. Perhaps the most impressive stat from his 2018/19 season was the fact he regained possession 6.34 times in the middle and defensive thirds. He puts out fires with great regularity.

According to various reports, Roca has a €40million release clause in his current deal. Though it may seem a steep fee for a player without an international cap for Spain and is yet to play European football, he's still a potential bargain.

In a year or two, Roca could be worth double that. He's impressed and performed at a high level for two years now, but the 2019/20 campaign could be his breakout season, one during which all of Europe's top clubs realise he's the next great Spanish midfielder.