Arsenal are collecting left-backs like they’re going out of fashion. They also seem to have a fascination with curly-haired footballers, too, so reported target Marc Cucurella should be a perfect fit.

The Gunners added Kieran Tierney to their ranks during the summer transfer window to rival Sead Kolašinac for a starting berth. But with the pair both injured, Bukayo Saka stepped in at the start of December and hasn't looked back.

Mikel Arteta now has three genuine contenders to play left-back. If reports in Spain are accurate, that number could soon rise to four. According to Cadena Cope, Arsenal are interested in Cucurella.

Currently starring for Getafe on loan from Barcelona, the versatile 21-year-old has a reasonable £21million release clause in his deal at Camp Nou. His form at the Estadio Coliseum Alfonso Pérez this season has seen him cross several club’s radars.

Sevilla and Atlético Madrid want to keep Cucurella in Spain, Bayer Leverkusen and Borussia Mönchengladbach are battling to bring him to the Bundesliga while Tottenham Hotspur are rivalling Arsenal for his signature in England.

Reports claim the Gunners are prepared to splash the cash to sign Cucurella despite spending £25million on Tierney less than 12 months ago.

A move for the Spain under-21 international could cast doubt over the former Celtic man’s future at the Emirates. With Arsenal battling for a place in the Champions League, they can ill-afford to carry passengers and Tierney’s injury woes could count against him. If Arteta can’t rely on him, he can’t be viewed as a key figure in his plans.

With Saka’s future reportedly up in the air – he’s rumoured to be a transfer target for league leaders Liverpool and Manchester United – and Tierney’s injury struggles, Arsenal’s desire to add another left-back to their ranks makes a lot more sense than it does at first viewing.

Well, it's clear Arteta wants his side to play a certain type of football. His players need to be composed in possession and confident on the ball. Given Cucurella used to be a winger, and still operates in advanced areas on occasion, he's used to being under pressure and he knows the importance of not giving away the ball too cheaply. 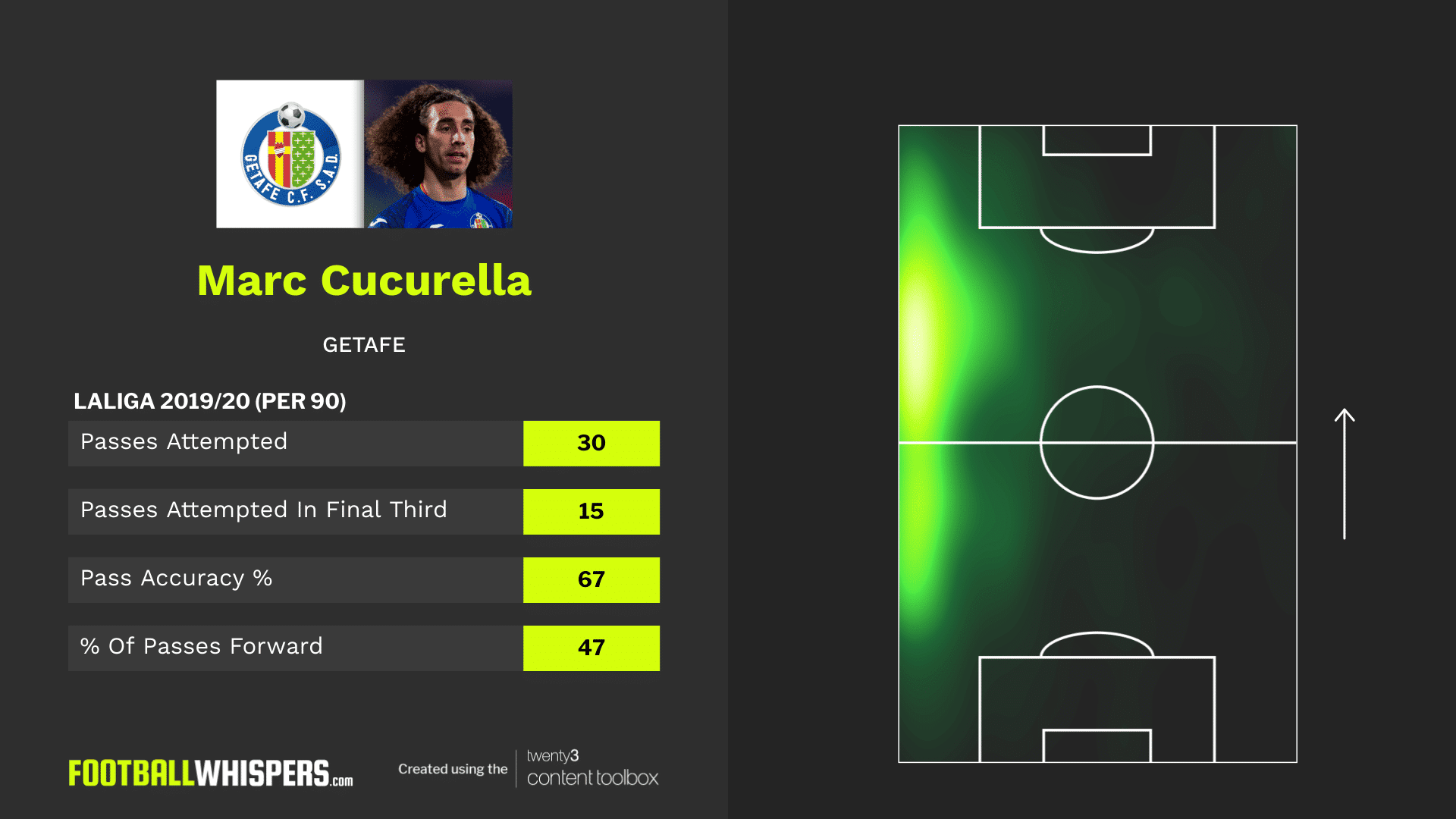 Cucurella shares a number of traits with Saka and his playing style has gone down well with the Emirates faithful. He likes to attack the opposition full-back and his burst of acceleration often creates crossing opportunities that others simply wouldn't be able to carve out.

He may only attempt 30 passes per 90 but half of those arrive in the final third. That tells you everything you need to know about the 21-year-old. His passing accuracy isn't the greatest but he's a creative outlet for Getafe; he's not judged on pass success with his style relying on volume. His delivery from wide areas is superb.

The La Liga side encourage him to put crosses into the area and this directly impacts his passing accuracy. For example, he may attempt five crosses in a single match with only one finding a team-mate. That gives him a 20 per cent success rate but that one completed cross could lead to a goal.

It's the same with all creative players. Trent Alexander-Arnold loses the ball more than anybody in the Premier League. On one hand, that could be viewed as a negative. In reality, Liverpool don't mind because he's their main source of creativity. Misplaced passes and chance creation go hand in hand.

What really stands out when watching Cucurella is how quickly he looks to use the ball. Some full-backs will hold onto possession for too long so passing lanes are blocked off and defences are able to get set for the inevitable cross. But the Getafe man is the complete opposite, and it's part of his charm.

At times, he pokes the ball into the penalty area when it doesn't look physically possible. The pass might not be the best but the speed of it means defenders are on their heels and Cucurella's team-mates are able to get ahead of them to fire an effort goalwards.

Unlike other full-backs, the Getafe No.15 isn't married to the touchline either. He isn't one-dimensional and often ends up in central areas, positions usually associated with attacking midfielders – perhaps due to his days spent as a winger. He's then got the vision and the composure to play passes other left-backs simply don't have the confidence to even try.

In terms of playing profile, Cucurella ticks all of the boxes you want from a full-back in a team looking to dominate possession. He's the sort of player Arteta could have a lot of fun with. While £21million may seem a lot for a relatively inexperienced player, some full-backs with inferior skillsets are going for £50million on the current market.