Manuel Neuer, much like mini-games on DVDs, is something of an odd case.

Both were deemed revolutionary. Game changers of their sphere. However, they were quickly superseded by a new type of product that took things to the next level. And that meant the innovative became quaint. A museum piece.

Which brings us to Bayern Munich’s trip to Liverpool in the Champions League. It wasn’t just a clash of two of the best European sides in club football, it was Neuer, who made the world rethink how we viewed goalkeepers, against Alisson, a player we barely think of as unusual despite being as adept with his feet as his hands.

Football is moving more and more in the direction of Neuer’s goalkeeping – the comfort with which he has the ball and distance with which he takes it from goal.

Football Whispers looked for the 50 goalkeepers most similar to Neuer's passing style since 2016/17*. Thirteen of the top 50 were from seasons by players in 2016/17. Fifteen were from 2017/18. And twenty-two were from the current campaign. The trajectory is clear.

While much of this trend seems to be that the younger goalkeepers coming through the ranks are just more comfortable on the ball, some older players encapsulate it within this short time-span.

Kasper Schmeichel and Petr Čech are two such examples.

To make the visuals a little less busy, we’ve chosen to show two of the key types of passes: old-fashioned long balls and a group of passes that tend to be fairly short and taken from outside of the eighteen-yard box.

These are all open-play, and this is how often Neuer goes walkabout to play little passes. 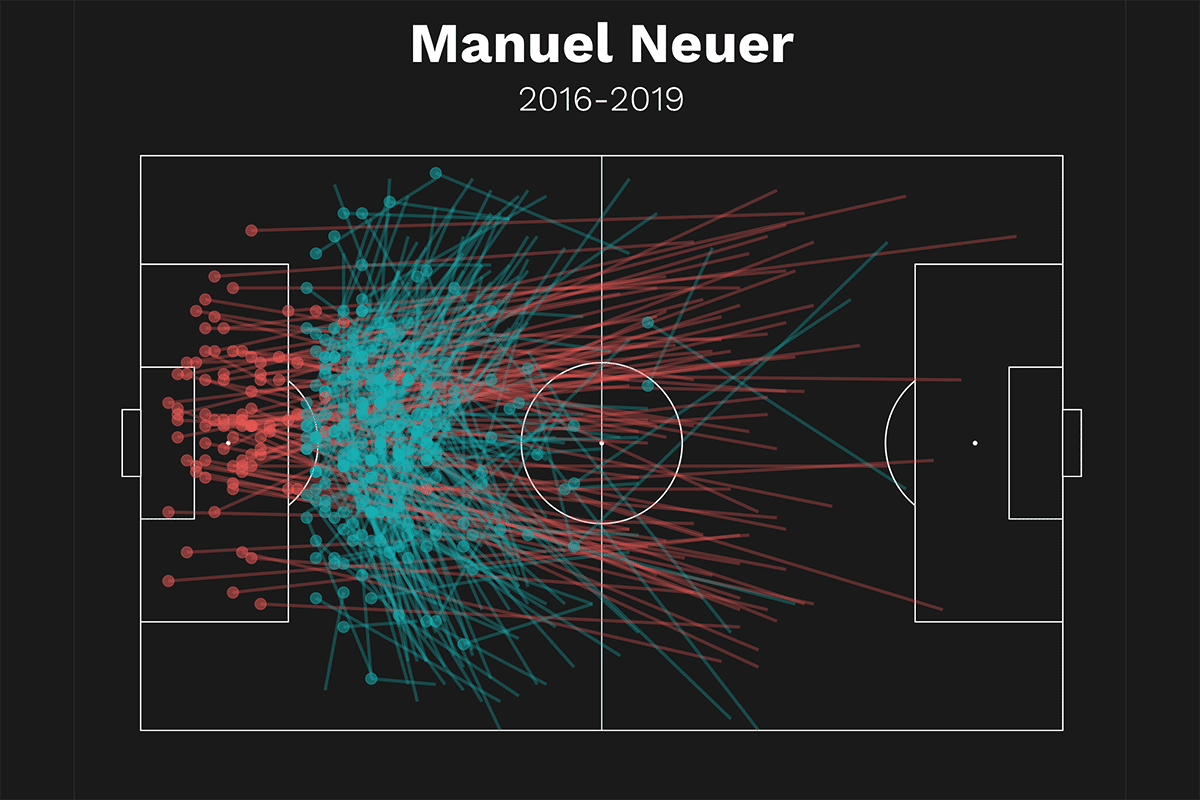 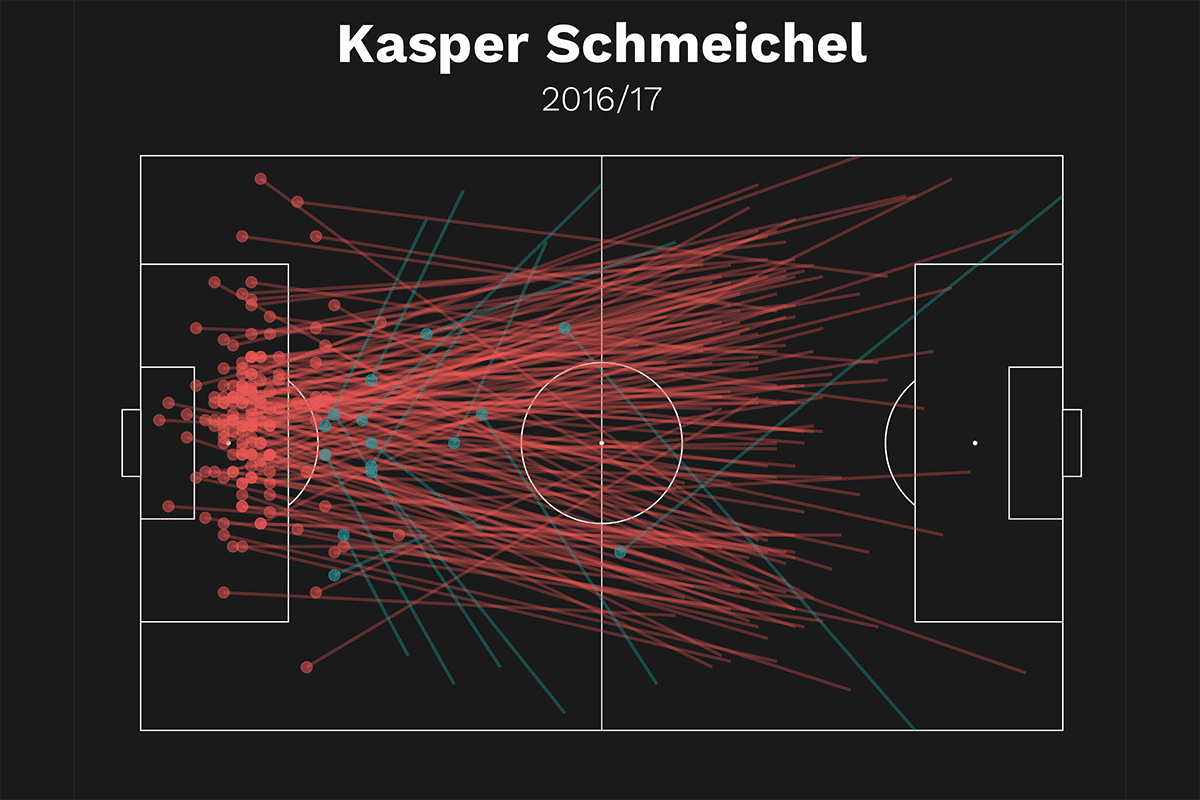 Pretty stark. While the Bayern man looks almost like a centre-back, Schmeichel is very much the traditional kind of keeper.

But, as managers have come and gone and Claude Puel has put his footprint on the Leicester side, this has changed quite dramatically. 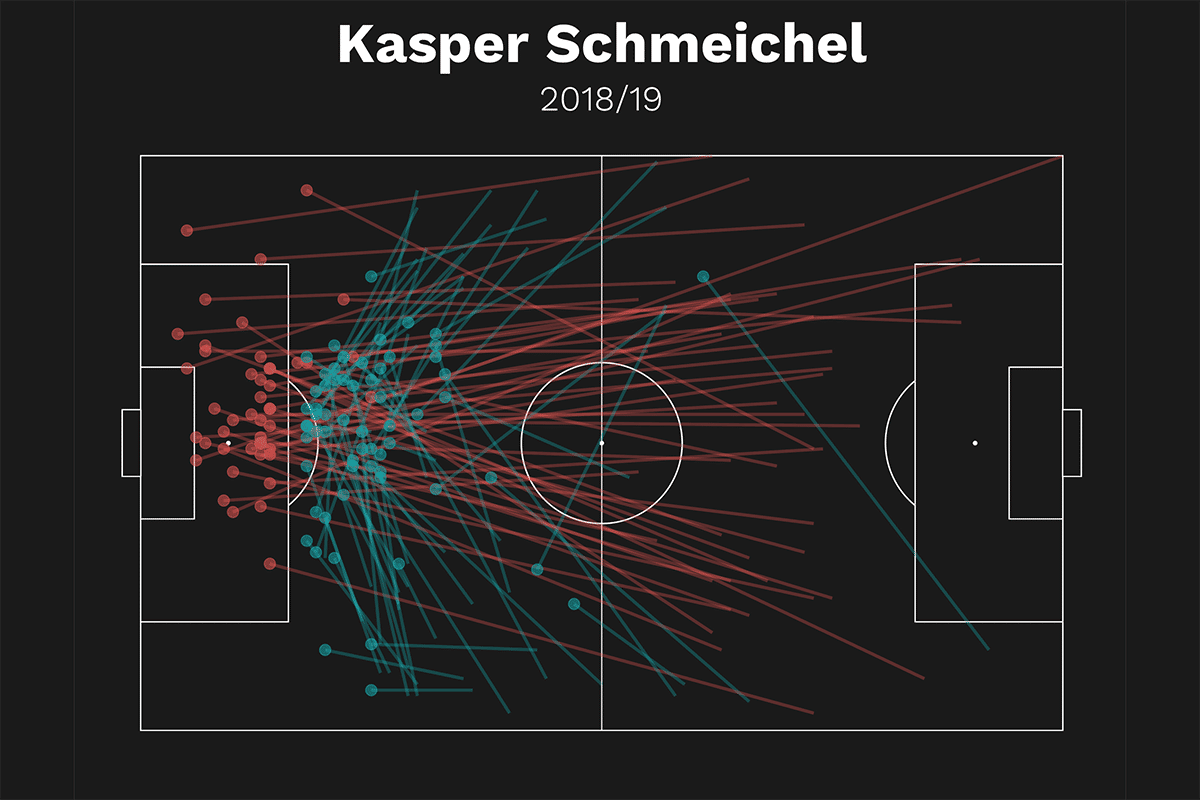 A lot of this will be down to the change of manager at Leicester, which may or may not be a good indication of a wider move in football. Claudio Ranieri and Craig Shakespeare are fairly clearly at a very different end of the spectrum to Puel.

The change that Čech has undergone started to take place under Arsène Wenger, though, a much better sign that ideas were altering within the sport. 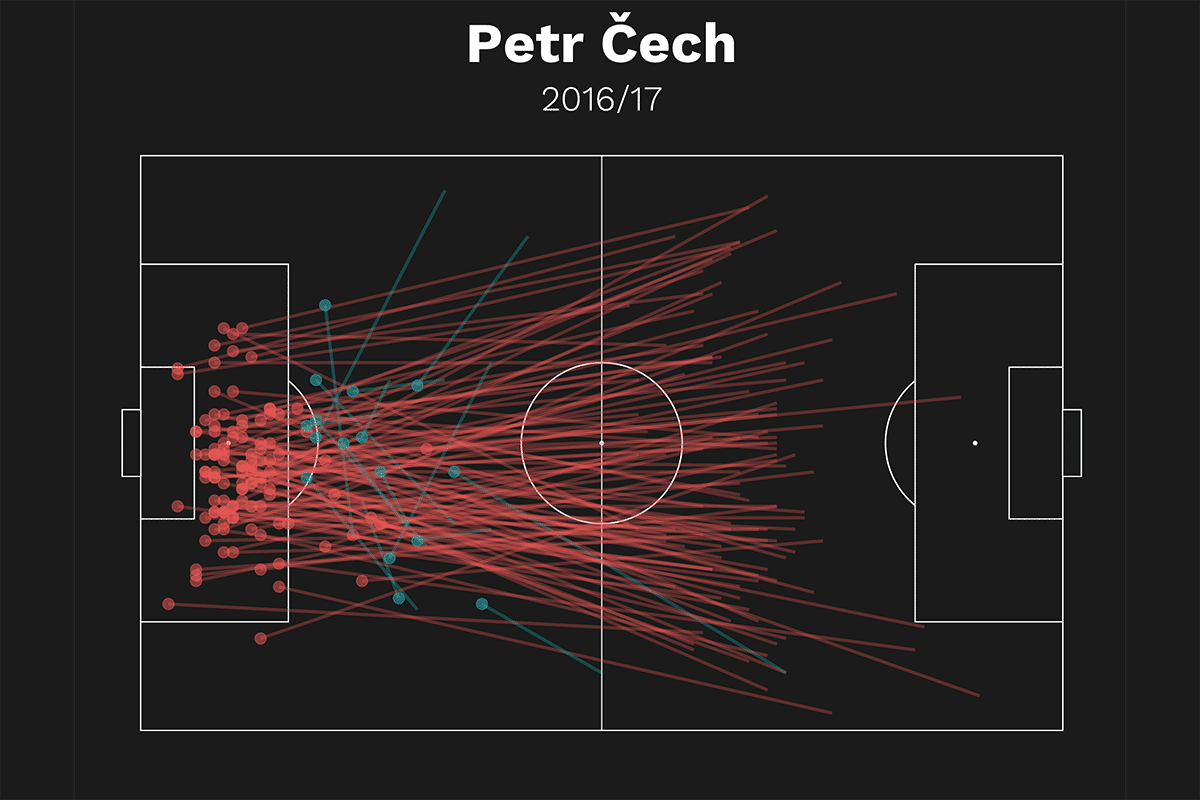 The 2017/18 season saw him venture further away from goal a little more often. It wasn't as radical a change as Schmeichel's, but it was still noticeable. 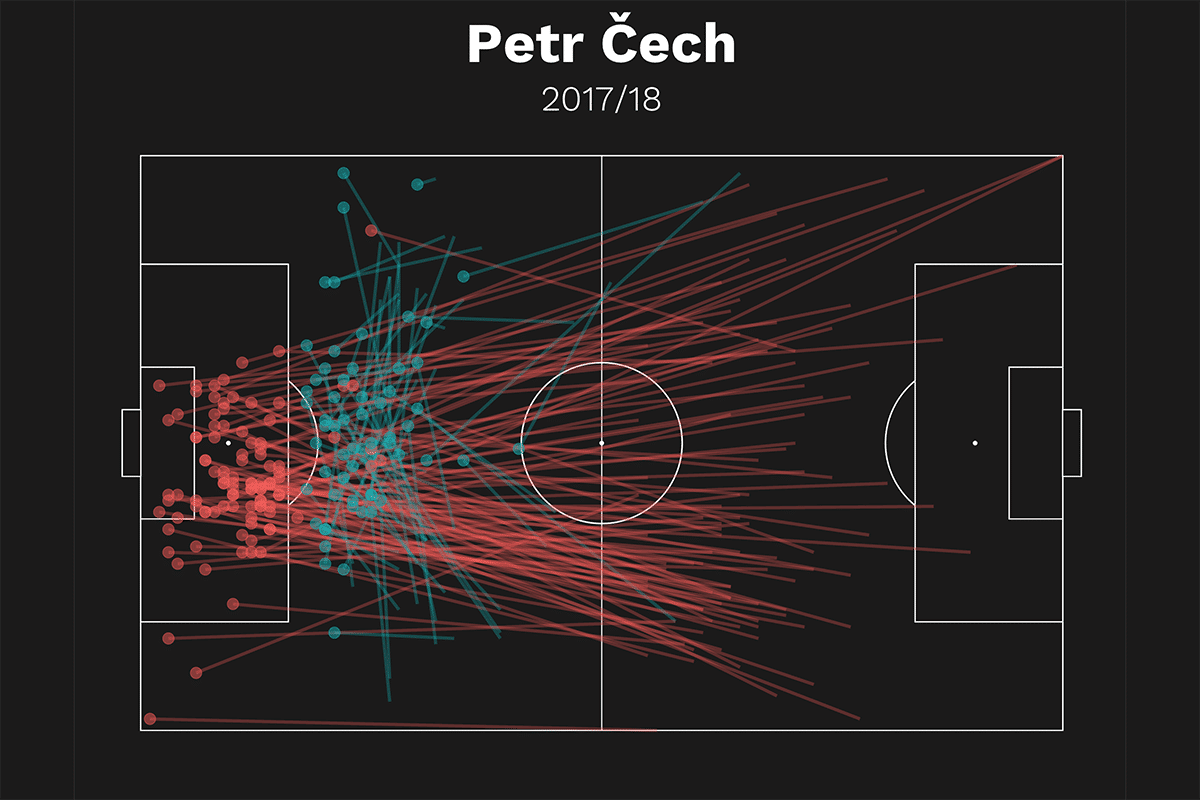 Tellingly, Neuer may not even be the most adventurous goalkeeper in the Bundesliga anymore.

Just above Bayern in the league table sit Borussia Dortmund, and their goalkeeper Roman Bürki consistently makes high amounts of passes away from the safety of his penalty area. 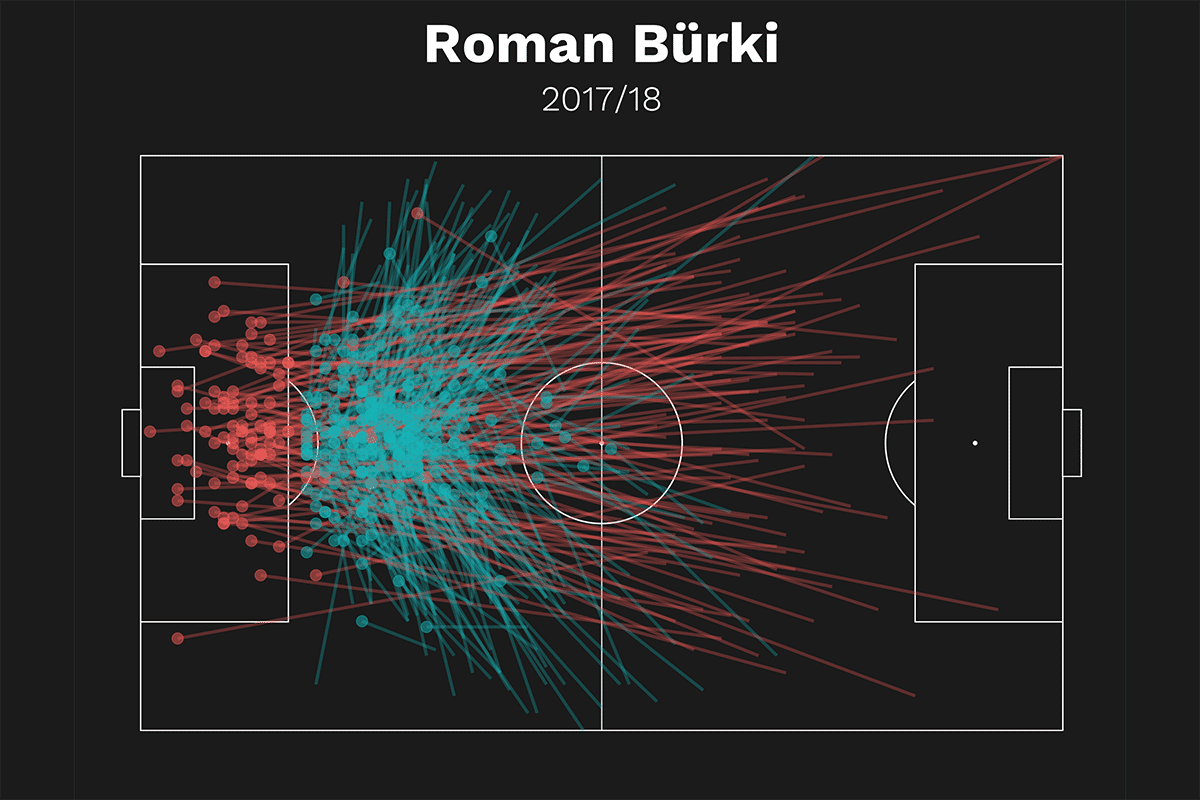 When we look back on the evolution of football, Neuer will surely get a chapter to himself. He marks a turning point in the way that goalkeepers played with their feet, dividing the history of the position into the pre- and post-Neuer era.

But, like many early innovators, he’s been joined and overtaken by the wave of those who followed his groundbreaking steps.

Cluster analysis was carried out on goalkeeper passing data which found that Neuer’s 2016/17 and 2018/19 seasons were similar enough to group all of his data together as a benchmark for comparison for this article; 2016/17 is the earliest season for which Football Whispers has data.

Here are the clusters, using Neuer as an example.

Underlining the ‘football’ in ‘football analytics’

Kane evolution has moved him closer to Ballon d’Or elite