It's fair to say that West Ham United‘s first season in Stratford hasn't gone exactly to plan. While the club maintain the move from Upton Park has been a success, the team's exploits on the pitch have fallen short of expectations following a strong send off to their famous old ground.

A run of five consecutive defeats had seen the Hammers slip somewhat under the radar into the relegation battle, making their match with Swansea at the weekend a must win encounter for Slaven Bilić. Victory for the Swans would have left the hosts just three points off the drop, so when Kevin Friend blew for full-time on Saturday the relief was clear to see from the Croatian.

A 1-0 win courtesy of Cheikhou Kouyaté's late first half strike has seen West Ham move eight points clear of the drop. The Senegalese midfielder, who was so impressive in Bilić's first season, is ironically one of those that has failed to set the same standards this time around. There aren't too many that have, but Manuel Lanzini could perhaps consider himself among that select few.

With injury hampering the Argentine's progress at the start of the season, it wasn't until the sale of star man Dimitri Payet that Lanzini began to find his stride but since the turn of the year the 24-year old has been a real bright spark in a pretty dull period for the club. While the two combined well at times, with Lanzini perhaps the only teammate that could keep up with Payet's speed of thought, there's a real sense that the former has enjoyed stepping out from the Frenchman's shadow. 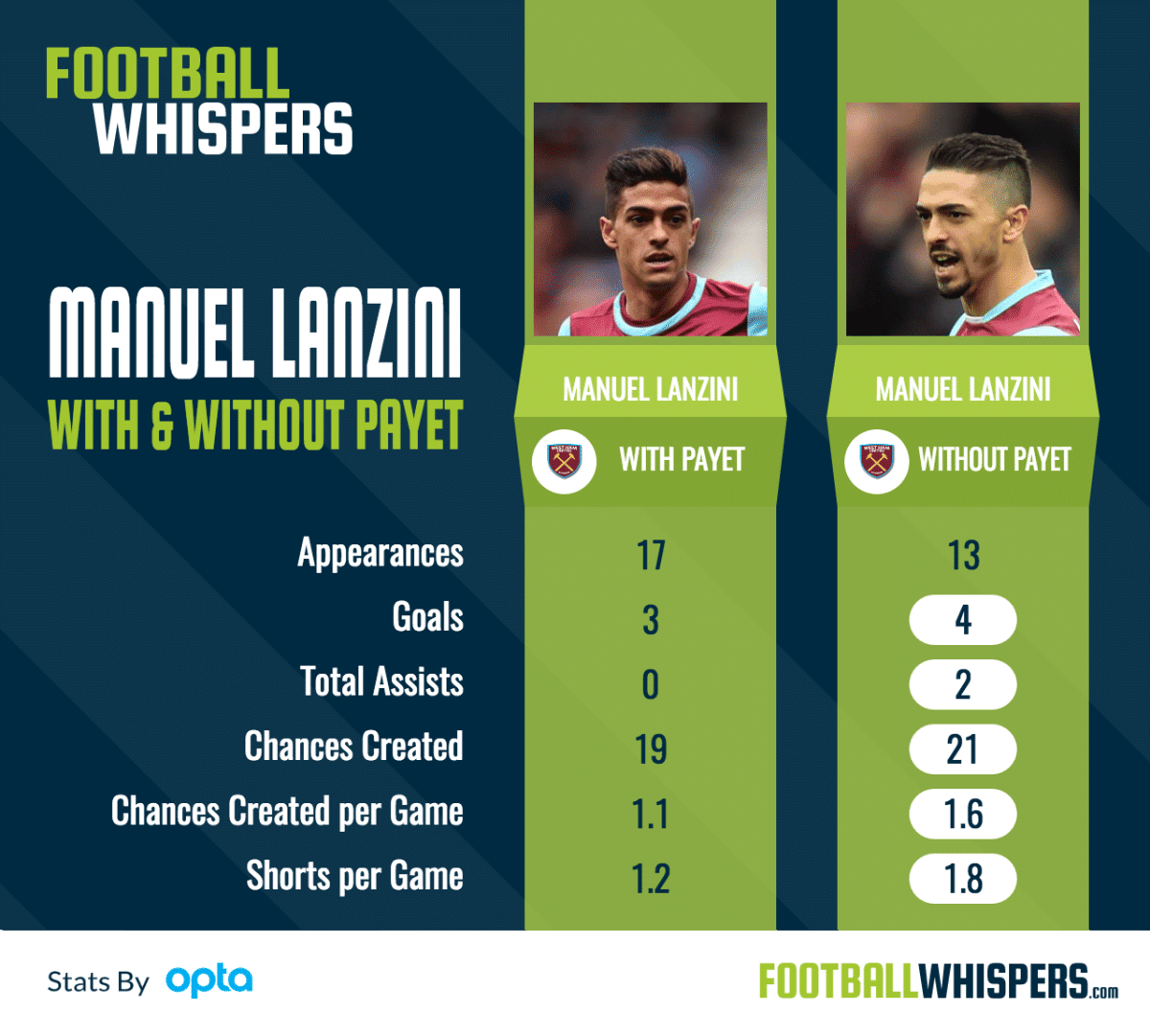 READ MORE: WHY WEST HAM SHOULD SHOP IN CHAMPIONSHIP THIS SUMMER

His ability to deliver a telling final ball in the attacking third can't stand up to that of Payet but Lanzini creates problems for opposition defences in a different manner. Capable of breaking the lines himself rather than looking for pockets of space between midfield and defence like his former teammate, the Argentine is relishing the freedom that Payet's departure has afforded him.

It's clear in the stats that while West Ham's fortunes have scarcely improved in the calendar year, Lanzini certainly has. He's stepped up to the plate since Payet's Marseille return where so many teammates have failed. When you consider the club looked to ensure last season's player of the year wouldn't leave such a creative chasm in the side, both prior to his transfer with the signings of André Ayew and Sofiane Feghouli, and since with the arrival of Robert Snodgrass, it's only Lanzini that has shown he is up to the task thus far.

His figures for key passes and successful passes in the final third per game have each risen slightly — from 1.3 to 1.6 and 11.4 to 13.6 respectively — since Payet's sale. However, it's his willingness to try and make things happen himself at a time when Michail Antonio has had his injury problems, and the aforementioned new arrivals have struggled, that has caught the eye.

A modest average of 1.5 shots per game has jumped to 2.5 since Payet's last game, while his dribbles have seen an even more significant increase. With the onus on getting the ball to the France international as soon as possible before the turn of the year, Lanzini now has the license to carry the threat himself, averaging 3.7 dribbles per game since the opening game of 2017 – the fourth most in the league — having completed just 1.3 per game beforehand.

What's more, while his stature can see him outmuscled at times, Lanzini isn't one to shirk his defensive responsibilities. Indeed, when West Ham were at their giant killing best last season the playmaker had a key role in regaining possession high up the pitch and forcing errors, when Payet was understandably and successfully given far more freedom to focus on what he did best in attack.

What helps to mark the South American out as such a technically gifted talent though — there are plenty of players that can run with the ball and pressure opponents without it, after all — is his ability to retain possession in tight spaces and advanced areas. A pass accuracy of 87.8% is an outstanding return for a player of his position, as well as the best at West Ham, setting him apart from most of his teammates as a player that perhaps belongs at a higher level. It is, after all, the best accuracy of all attacking midfielders to have started more than 20 Premier League games this season, just ahead of David Silva (87.4%) and Mesut Ozil (86.4%)

It's also a figure that would surely only rise alongside better players, and West Ham's win at the weekend becomes all the more important when you consider the likes of Lanzini are far more likely to stay — or at least command a higher fee — if the club do beat the drop as expected. That shouldn't deter potential suitors though, and most in the league would benefit from a player of Lanzini's quality and indeed potential.

Having recently lost a player that was so crucial to his side's threat going forward, Bilić certainly wouldn't welcome offers for a talent that has arguably taken the mantle as the West Ham's prized asset.

WHY JAAP STAM ISN'T THE RIGHT MANAGER FOR WEST HAM