The main focus of this article is to provide you with some useful betting tips for the game Mansfield vs Oldham. Both teams are in the bottom half of the table but are not threatened by relegation. Mansfield currently sits at 18th seed, 12 points clear of the relegation zone. Oldham is even higher up at 16 with 54 points for the season so far.

Here are the top three betting tips for the game on Saturday, according to our experts. If you want more free League Two betting predictions, just check out the appropriate section on our website.

Bear in mind that you should check the prices of the fixtures mentioned above before placing the bets. Our recommended bookmaker for this match is Ladbrokes.

Mansfield and Oldham have been almost in the same shape in April. With three wins and 3 losses, Oldham has a 1-point advantage in April over Mansfield, who ended up with 2 wins, 2 draws, and 2 losses. What is more, Oldham won two of their three away games and did so with a winning margin of 3 goals both times.

For all six matches played in April, Oldham finished just one game without scoring a goal. When it comes to Mansfield, the situation there is three out of six. Keeping in mind that Mansfield missed the chance to strike during the last game, it is quite likely that on 01/05/2021 they will do their best to change the statistics. Furthermore, Oldham's defense has allowed 9 total goals over the last 5 games.

Oldham did quite a good job in April where they scored more than three goals in four out of six matches. For Mansfield, the average result is quite low – 0.83. Still, as mentioned above, Oldham plays attacking football and they allow goals regularly. We expect Mansfield's 0.83 to be inflated to at least 1.00 in this game. This leaves us with Oldham needing to score 2 goals which may prove to be absolutely reasonable.

In the table below you can find information about both teams – their H2H stats as well as some odds comparison.

Match preview of the Mansfield vs Oldham game

Having a look at the statistics between the two teams for the last years, the matches rarely end with a clean sheet. Most of the examples show quite high overall scores, such as 5 or even more total goals per full time.

To sum up, players from both teams will show almost equal effort during Sunday`s match, knowing that neither Mansfield nor Oldham have any injured footballer. They also haven`t had any suspended players for the last ten matches. What is more, as there is no risk for both teams to relegate, the match is expected to be friendlier and not so intense. 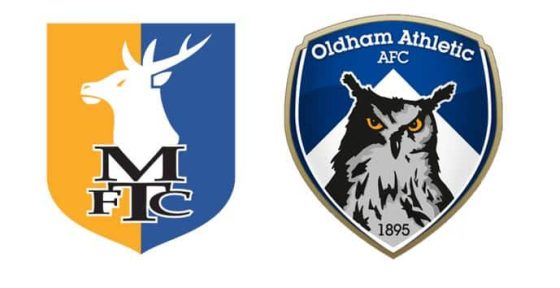 FAQs about Mansfield vs Oldham match