Mansfield vs Middlesbrough: Our betting tips

This match is a clash between two exceptionally in form sides albeit there are two divisions between the duo. Will we see an upset? Find out with our Mansfield vs Middlesbrough match preview with free tips, predictions and odds mentioned along the way.

First things first, Mansfield have been in terrific form of late having won their last five and nine of their last 10 games. In fact, with such things under consideration, we would possibly have backed them to cause an upset against a lot of Championship sides. Unfortunately for them, they'll be facing a Middlesbrough side that haven't lost in six having won five of those games. For that reason, along with the obvious difference in quality of the playing squads, we are backing Middlesbrough to go marching through.

It will be a game lacking goals

Although Mansfield have been in great form of late with plenty of their games going beyond the 2.5 mark, we don't see that happening here. Middlesbrough will be dictating how this game plays out. Their intention will be to get a goal or two in front and see the game out without exerting themselves too much given their hectic schedule. Four of their last five games have gone under 2.5 so we see no reason why this will be any different.

Check out the key stats & form for Mansfield vs Middlesbrough

Mansfield and Middlesbrough will both want to progress in this tournament but, ultimately, their key aspirations for the next few months is about getting out of their respective leagues. With both sides in good form though, we should see a decent encounter despite the gap between them in league standings.

There is no doubt how Mansfield will approach this game. They've been in fantastic form of late and will fully believe they can get a result in spite of Boro's superiority on paper. They will 100% be at full strength.

Like their hosts, Middlesbrough have been in good form of late and whilst their eyes will be on promotion from the Championship, this is very much a banana skin for them in this competition so they'll have to approach it right. We expect a few changes but don't think you'll see a complete switch away from the usual XI.

A brief FAQ ahead of Mansfield vs Middlesbrough 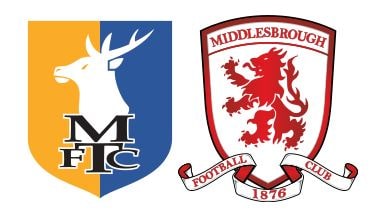