Manchester United’s 4-0 victory over Chelsea was a game of FIFA come to life.

The scoreline didn’t tell the whole story; Frank Lampard’s side had more of the ball and landed more shots on target. Ole Gunnar Solskjær’s tactics, meanwhile, centred around utilising the pace of his forward line.

Four goals and a clean sheet suggest the United boss got it right. Tipped as the second favourite manager to be sacked by the bookies, the pressure was on the United legend to deliver after a mixed time in charge last term. A bad start in front of an expectant home crowd would’ve been a nightmare scenario for the Norweigan.

It nearly happened, too. Tammy Abraham rattled the post with just three minutes on the clock as the visitors imposed themselves.

However, a reckless challenge from Kurt Zouma turned the game in favour of the home side; Marcus Rashford fired home the resulting penalty. It was the first of many errors from Lampard’s men on the day and it’ll no doubt be a match the Chelsea legend takes a lot from.

But the blitzkrieg approach the Red Devils adopted at home to the Blues isn’t a sustainable one. They were fortunate to come up against an inexperienced and naive side who played perfectly into Solskjær’s hands.

For added context, heading into the game, Chelsea had conceded eight goals in three matches in pre-season. Both Reading and Red Bull Salzburg scored three apiece while Borussia Mönchengladbach scored two in the final game before the season opener.

Defensively solid Chelsea are not.

Despite this United struggled to carve out repeatable opportunities. Yes, they pressed high and chances emerged as a result. But Chelsea caused the problems for themselves. 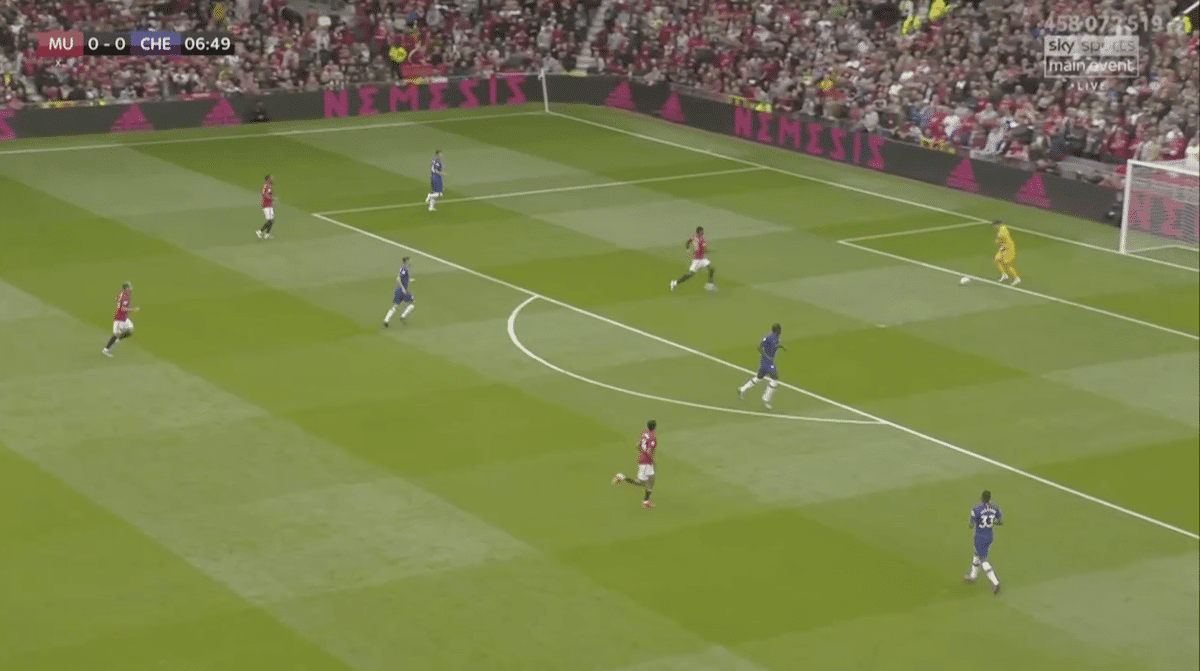 In the above still, the away side are looking to play out from the back. It's a tactic Lampard used at Derby and one his Blues side have been praised for during pre-season.

United, to their credit, are positioned well. Rashford is closing down Kepa while blocking off a simple pass Jorginho. Andreas Pereira was also following up to keep the adopted Italian facing his own goal even if he did receive the ball.

Jesse Lingard, meanwhile, is moving to close off the avenue to Emerson while keeping the pressure on Zouma. 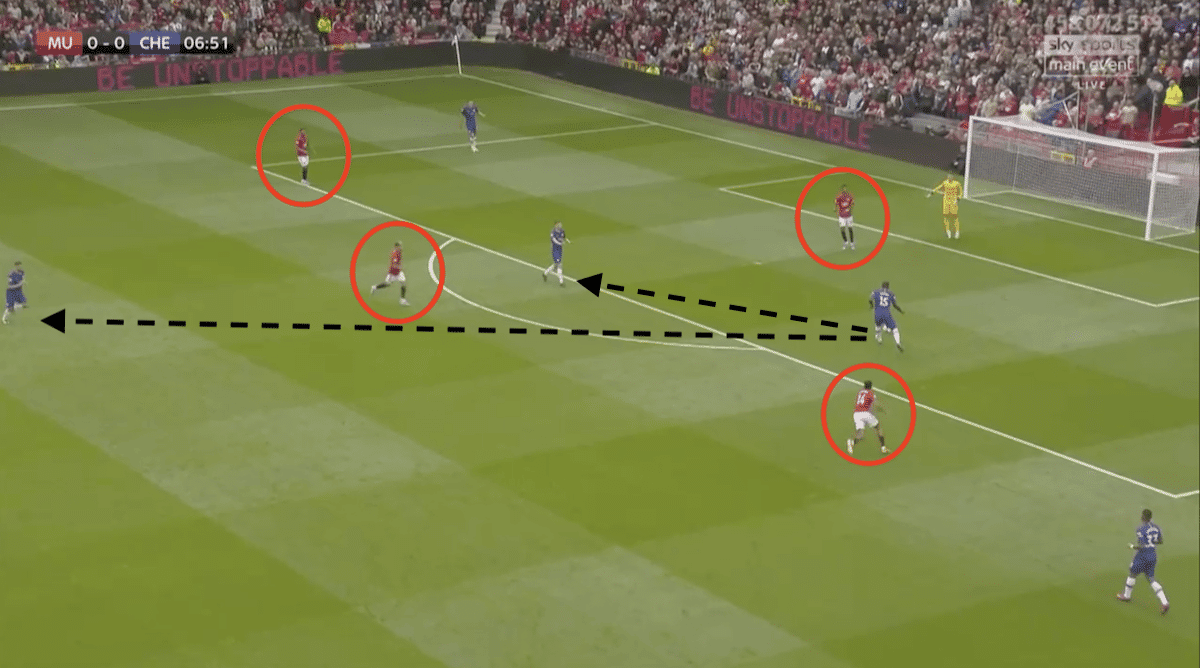 However, the second phase of the press is lacking. The four United players circled all commit but aren't backed up by Scott McTominay or Paul Pogba. If Zouma is more composed on the ball, he's able to find Jorginho or Mateo Kovačić, as shown by the arrows.

A simple pass, that's all it'd be, to the feet of the Chelsea midfielder takes four United players out of the game. 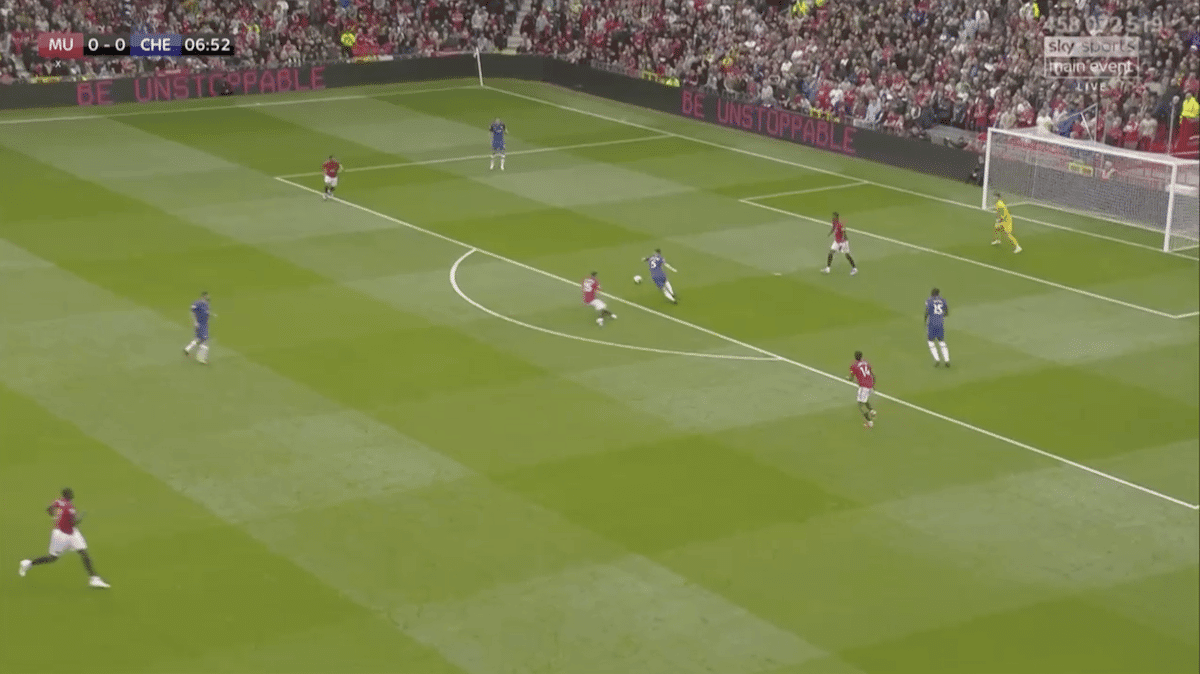 It's even clearer in the still above. Zouma overhit his pass to Jorginho but had he been confident enough to play the ball to Kovačić, the Croatia international would be in acres of space in the centre of the pitch.

It highlights how against a more composed team, the press would have been played through. In this instance, however, United are able to get a shot off – one of the five they managed to get on target with the other four resulting in goals.

What this highlights is this rampant United side only looked so good because Chelsea helped them.

There's an argument to suggest the example above only comes about due to the United press and that Zouma fails to make a simple pass because he feels under pressure. To an extent, they may have a point.

But the still below shows just how imbalanced Lampard's side was and why United were able to pick them off time and time again. 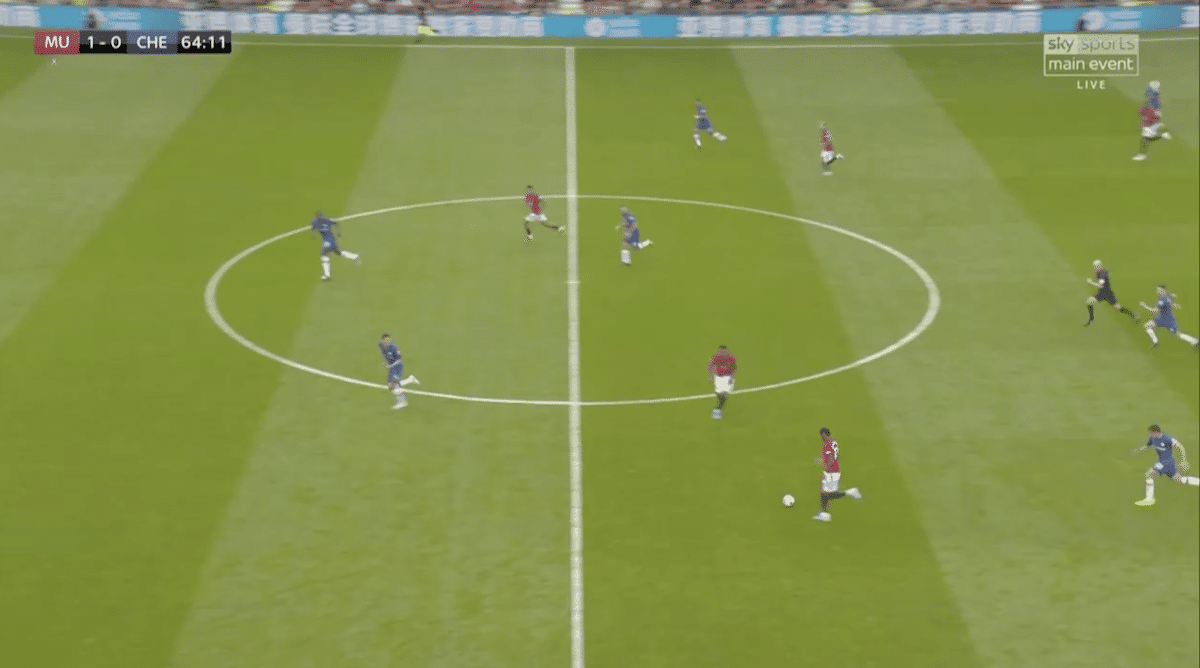 Chelsea work the ball into the final third and it lands at the feet of Abraham. The new No.9 attempts to hold onto the ball but is shrugged off it by Harry Maguire.

McTominay backs up his defender and is able to collect possession. The Scot takes two touches and Jorginho tries press. Yet the Italian is caught on his heels and 22-year-old feeds the ball to Rashford.

With one pass, five Chelsea players are taken out of the game. The United forward is then able to drive into the space ahead of him and it's four versus four heading into the Chelsea half. At 1-0 down, there aren't many sides naive enough to leave themselves this open.

Solskjær and his players benefited from Chelsea's inexperience across the board. A manager unproven in the English top-flight, an untried defensive pairing, a midfield without a destroyer and a new-look forward line.

United won't be fortunate enough to come up against many sides like that and only then will the Red Devils really be able to show whether they're cut out for a top-four push.