Since Sir Alex Ferguson stepped down in 2013, Manchester United have constantly been seduced by big-name players who command extravagant transfer fees and exorbitant wages. And there's been little end return in these investments.

Ángel Di María lasted just one season after United paid £59.7million to Real Madrid for the Argentine. As did Radamel Falcao, who arrived at Old Trafford on a loan deal from Monaco which cost the Red Devils £6million plus the striker's £265,000-a-week wage.

The £80million it cost to bring Paul Pogba back from Juventus has not yet been repaid by the French star. Everton for £75million. And, of course, let's not forget Alexis Sánchez who the Red Devils are paying £300,000 a week to play for Inter this season.

This summer, however, United finally appeared to realise the error of their ways in the transfer market. Perhaps it was Ole Gunnar Solskjær's influence. Or maybe Ed Woodward had been burned once too often. But the club's strategy seemed to shift.

No more megastars. Instead, United signed undoubted potential in Daniel James and Aaron Wan-Bissaka. Harry Maguire, who admittedly did not come at all cheap at £85million, also arrived from Leicester City.

All three were sensible, well-thought-out transfers. James and Wan-Bissaka filled problem positions. Maguire was the centre-back to build a defence around. The Manchester club were back on track even if their final destination was well in the distance.

Then came a report in the national newspapers that United were interested in re-signing Wilfried Zaha and that his £70million price tag was not a deterrent. Sigh.

The club and the winger have history. Zaha was Ferguson's final signing before his retirement but the move didn't work out and he returned to Crystal Palace in 2014 ready to rebuild his career.

The 27-year-old, to his credit, has done so. He is regarded as one of the best players outside of the Premier League's traditional top-six clubs and can win matches singlehandedly when in the mood.

He was also courted by Arsenal in the summer and has been linked previously with moves to Tottenham Hotspur and Chelsea. So United being linked is certainly believable.

Yet Zaha is a player Manchester United don't need and their supposed interest makes little sense.

The primary reason for this is Marcus Rashford. The England international has often been played through the middle this season but with Anthony Martial back from injury, he is expected to move back out to the left flank.

As the heatmap comparison below, created by Football Whispers‘ exclusive toolbox, highlights, that is the position that Zaha has occupied for much of the previous campaign and for the majority of this season. 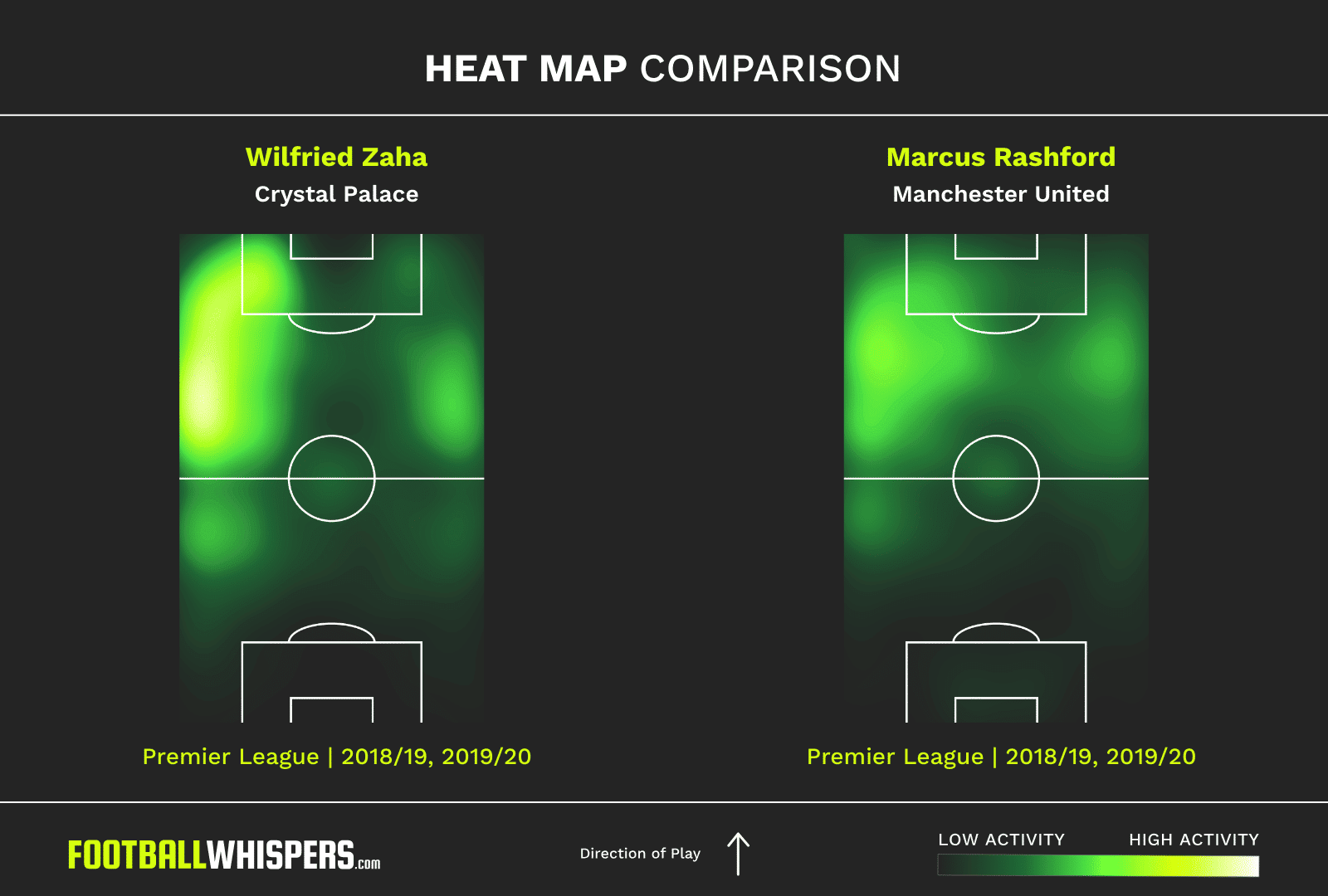 But what if Rashford plays through the middle? Well, Solskjær has got Martial to crowbar into the starting XI and it's very likely he'd be used wide on the left. So, again, no space for Zaha.

How about on the right? It's a position the Palace man has been used in on several occasions this season. Well, at United that role has predominately been occupied by James, who has impressed since his move from Swansea City. It would be unwise to stunt his rapid development.

The one forward position that is open at United is the No.10 role. Andreas Pereira has filled it on several occasions this term, while Jesse Lingard and Juan Mata are also options. None of the trio have truly convinced, however.

So could that be the hole Zaha fills at United? The reality is probably not. The Ivory Coast international has always done his best work with the ball at his feet – his 4.88 dribbles completed per 90 in the Premier League this season can only be bettered by three other attackers. 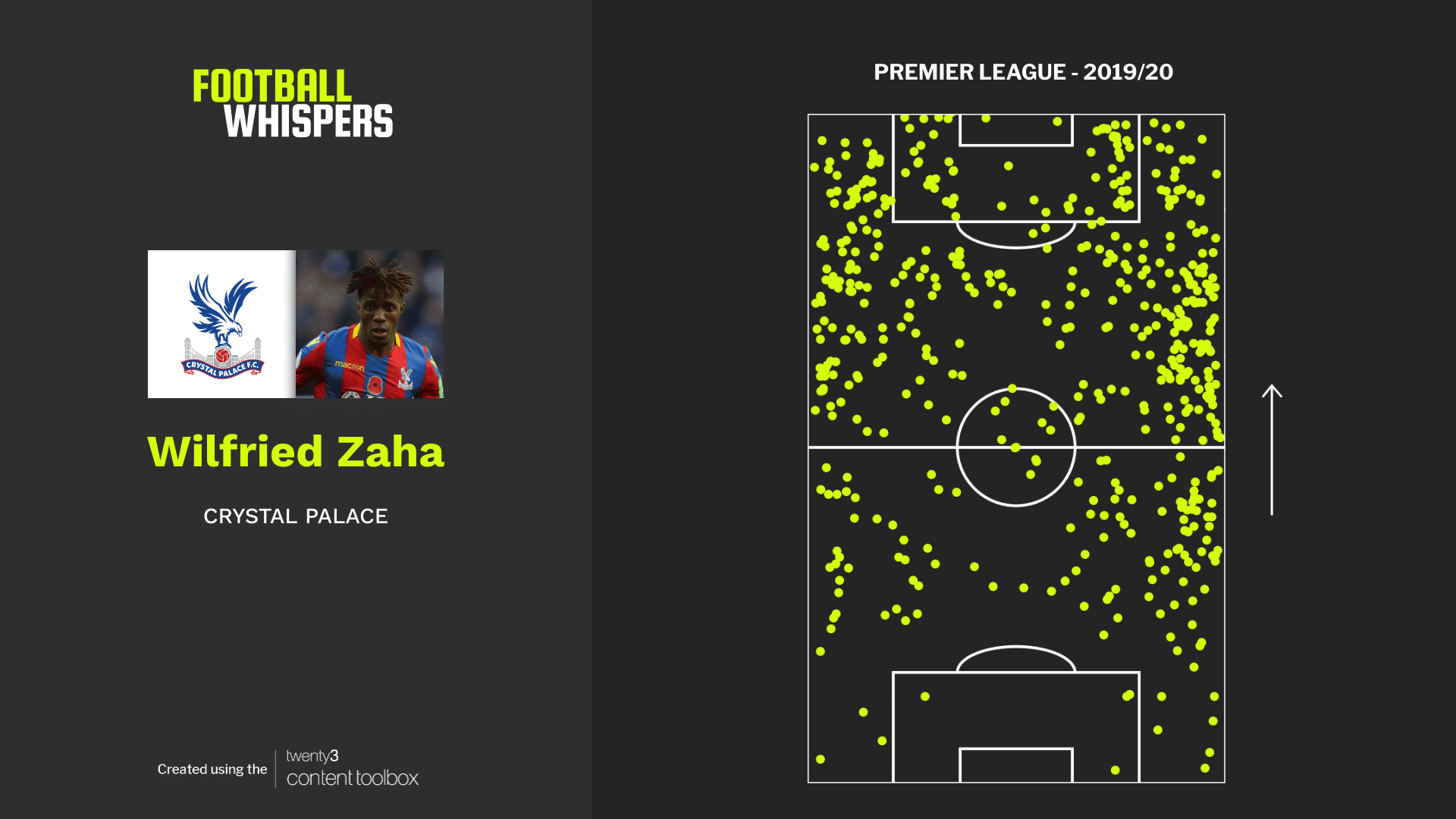 He needs space to operate in – as shown in the touch map above. Time to collect the ball, get up to speed and run at a defender. In the centre of the pitch, he will simply not get that and his effectiveness would quickly be blunted.

There is no doubting Zaha's talent: he has the quality to play for Manchester United. It's just the club don't have a clear opening for the winger and, given he'd cost £70million, his signing would be a mistake, especially as there are other areas that need urgent surgery.

It's time United prove they have learned from their past mistakes once and for all.