A tall, rangy, powerful midfielder who gets from box-to-box and influences play all over the park. Sound familiar? Denis Zakaria is exactly what Paul Pogba was meant to be for Manchester United.

The 22-year-old, who plays for Borussia Monchengladbach in the Bundesliga, is reportedly a transfer target for United, Tottenham Hotspur, Bayern Munich, Borussia Dortmund and Internazionale.

According to German tabloid BILD, Mönchengladbach will demand £44million for the Swiss international having previously turned down a £20million offer from Dortmund in the summer of 2018.

Now the two Premier League outfits have joined the race for Zakaria who could become Mönchengladbach's most expensive export ever by exceeding the £35million Arsenal paid for Granit Xhaka following the 2016 European Championships.

United's need for a domineering central midfielder is well known. It's an open secret Pogba's future lies away from Old Trafford with the player unhappy and Real Madrid seemingly hell-bent on making the Frenchman their next Galácitco.

Nemanja Matić is another player who will be ushered out the door marked ‘exit' soon with Inter reportedly keen on a January move for the 31-year-old who has featured in just 160 minutes of Premier League action this season. 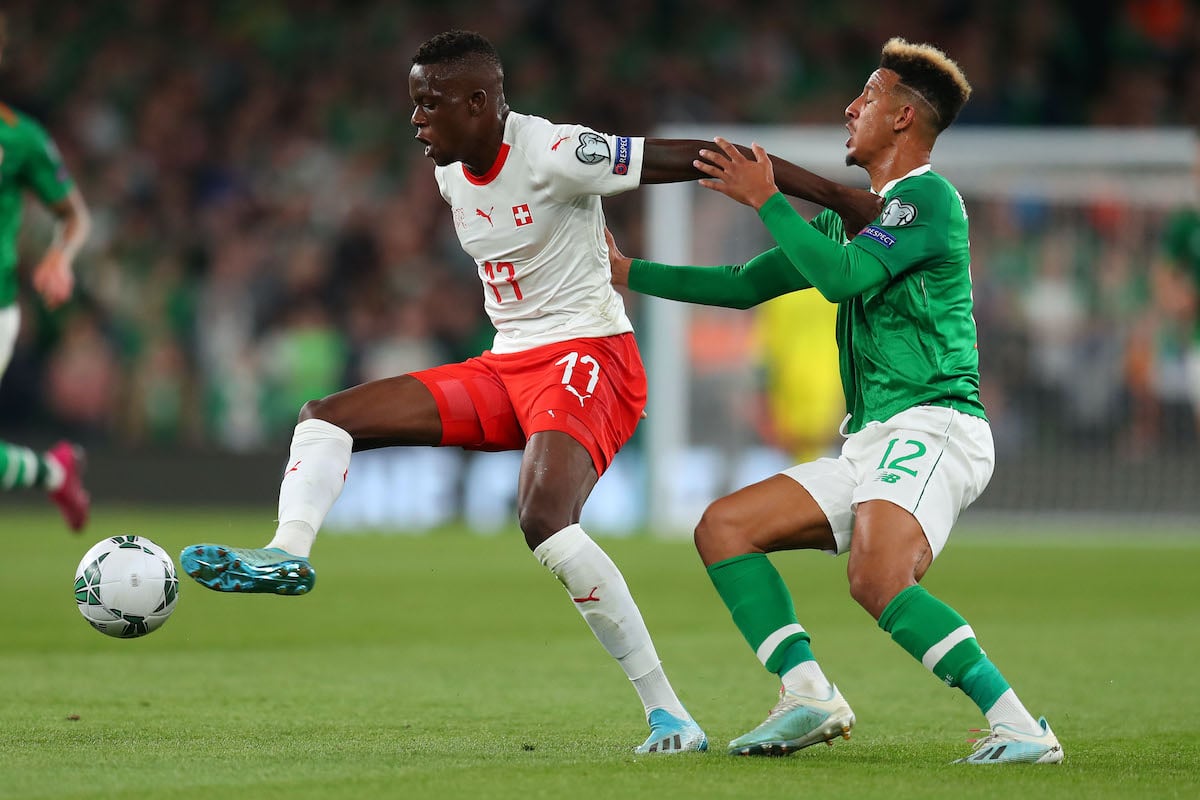 By contrast, Tottenham invested heavily in their engine room over the summer. Lyon star Tanguy Ndombele became the North Londoners' record signing while Giovani Lo Celso arrived on loan from Real Betis with the option to buy. But the Argentine has been prevented from making his debut by injury.

However, Eric Dier's future is in doubt and, after a stuttering start to the season, it's clear Mauricio Pochettino's squad needs a refresh.

On paper, Zakaria would be the ideal fit for the Premier League. At 6ft 3ins he has the physical attributes and has even been likened the Pogba, the man he'd surely replace at United, as well as Arsenal legend Patrick Vieira.

“I've been compared to [Patrick] Vieira and [Paul] Pogba – two more players I really respect and, in a way, see as role models. When I watch videos of them I think I'd like to play that way,” Zakaria said last season.

And it's not an unreasonable comparison either. Since the start of the Bundesliga season, Zakaria ranks seventh for possession regains in the middle third, contributing 1.43 interceptions and 1.29 successful tackles per 90. 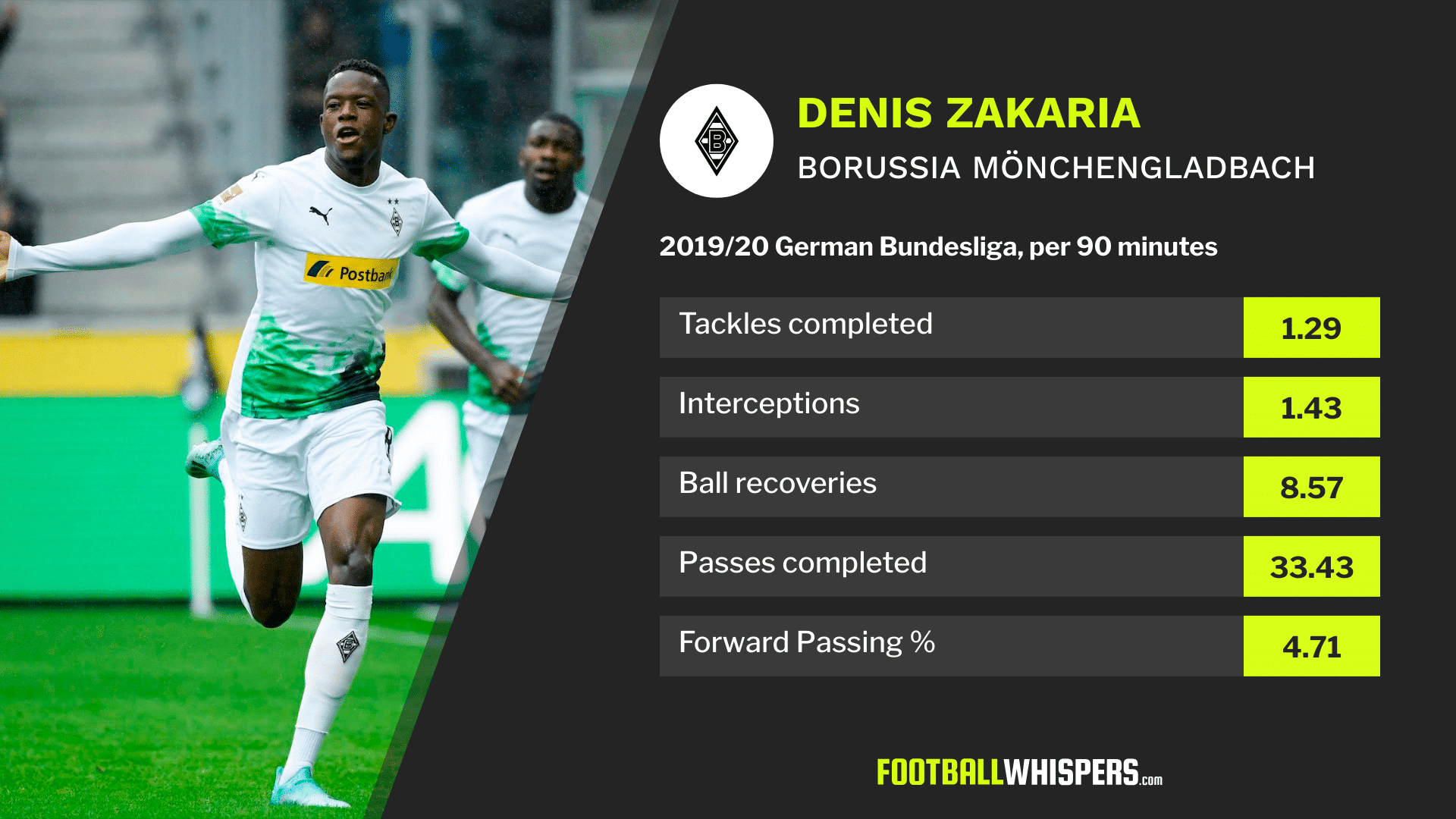 But the former Servette and Young Boys midfielder is not just a destroyer. While he is very adept at breaking play up, he is equally handy once in possession of the ball.

This term, Zakaria has a pass completion percentage of 84.8 per cent, while he completed 100 per cent of the passes he attempted in his first four Bundesliga games after making his debut. With 2.63 completed dribbles per 90, Zakaria ranks 14th among Bundesliga midfielders; his long legs and powerful running style enabling him to slalom through midfield at will.

His distribution could use a little work – he's averaging just 33.43 accurate passes per 90 this season, only enough to rank 108th among Bundesliga midfielders.

“I love to win back possession and I also like carrying the ball and taking on opposition players, but I need to be more efficient, score and assist more goals and improve in the air,” Zakaria admitted. “I've proved myself to be a quick learner, though, and I'm in the best place to learn fast.”

With interest in him rife, Zakaria has had opportunities to leave already but he is in no rush to leave Borussia-Park. “These are just rumours,” he said of reported interest from Dortmund in May.

“I'm in Gladbach and want to stay. Sure, you never know what can happen in football, but I feel comfortable in Gladbach. I'm looking forward to the new season and to playing under our new coach.”

Zakaria would do well to remember how many youngsters have come through at BMG and gone onto big things in recent years, too.

Current Borussia Dortmund captain Marco Reus made his name with Die Fohlen while team-mate Mo Dahoud also came through there. Goalkeeper Marc-André ter Stegen started out with Mönchengladbach before moving onto Barcelona. And then there's the aforementioned Xhaka who plays alongside Zakaria for Switzerland.

“His development is outstanding,” the Switzerland and Arsenal skipper said recently. “Having Denis next to me makes me feel better. But he has to stay tuned – now comes a very crucial phase for him.”

A big part of that will be choosing his next destination wisely. While Manchester United's need for a central midfielder to dominate games has been painfully obvious for years, Zakaria might be best served by continuing to hone his craft under Pochettino at Spurs. Unless the Argentine quits North London in the near future.

If his timing and decision making off the field is anything like as good as it is on it, Zakaria's future is in safe hands.