It may have taken a while but Manchester United have finally got their man. Bruno Fernandes has been on the club's radar since last summer but, despite a move to Old Trafford looking close on a number of occasions, the Portuguese star remained a Sporting player. Until now.

After weeks of public negotiation, the Red Devils managed to strike a deal with the Primeira Liga club while also fending off late interest from Barcelona to secure the 25-year-old's services. An initial fee of £50million could swell to £70million if certain clauses are met.

If the full £70million is paid, Fernandes would become the third-most-expensive player in the club's history. All eyes will no doubt be on the prolific midfielder and United's decision to pursue him will be scrutinised from the off.

So why did they pursue the former Udinese man so aggressively when there are plenty of other players out there who are performing in higher-quality leagues?

The truth is, it’s difficult to shop in the Primeira Liga. The quality on show isn’t what it once was, the big three – Sporting, Benfica and FC Porto – are notoriously difficult to negotiate with, and players tend to have excessive release clauses.

Yet those clubs do have a knack for unearthing gems. Ángel Di María, Radamel Falcao, James Rodríguez, Ederson, Jan Oblak,

Manchester United have finally agreed a fee with Sporting for Bruno Fernandes. The deal could rise to £68million ?

Those are the success stories. There are also a number of unsuccessful stories. Jackson Martínez, Juan Iturbe, Renato Sanches, Eliaquim Mangala, André Silva and United's very own Anderson all failed to live up to the hype after big-money moves away from Portugal.

But the Red Devils have done their research. They've been keeping tabs on Fernandes for the best part of 18 months if reports are to be believed. They've seen him shoulder the responsibility for an erratic Sporting side. They've seen him step up when it matters most the Leões. They've seen him be exactly what United need in their current set-up.

Though famed for his goalscoring exploits, the former Sampdoria man is much more than that. And it is just as well really. His goal record is remarkable but, in open-play, Fernandes isn't anywhere near as dangerous and this needs to be addressed.

United fans may feel as though they're getting a 20-goal-a-season midfielder. Fernandes could well hit those numbers if he's on set-piece duty. But relying on penalties and free-kicks for goals isn't sustainable. 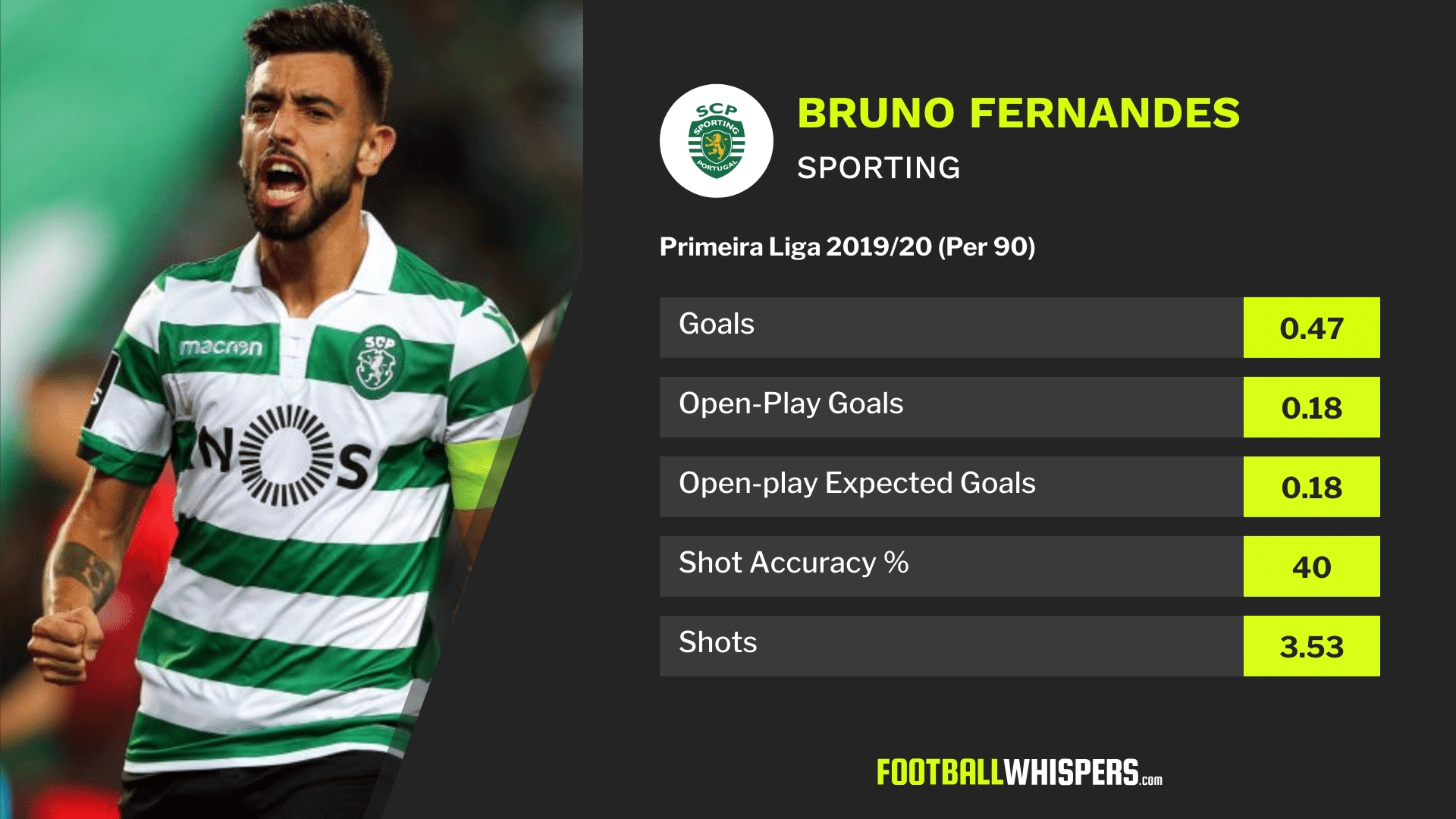 In open-play, he's averaging 0.18 goals and his expected goals average is 0.18. Over the course of a 38-game campaign, that averages out at about seven goals. It's quite a drop-off but it would still make him one of the most potent midfielders in the Premier League from open-play.

Not since the days of Frank Lampard and Steven Gerrard has a midfielder offered such variety going forward. Fernandes has carved out a name as a long-distance shooter but his knack of arriving in the penalty area at just the right time is what makes him such an appealing prospect for United. With Ole Gunnar Solskjær now using Anthony Martial as a false-nine, there's a lot of space in central areas for others to exploit. And this is where Fernandes could prove invaluable.

However, there may be an adjustment period. It's unlikely he'll be able to maintain the volume of shots he's been taking. So far this term he's averaged 3.53 and this is an abnormally high figure for a midfielder. In fact, this sort of average is usually associated with some of the better forwards in the league. So that is likely to decrease. But all that really means is Fernandes taking fewer shots from distance, which isn't necessarily a bad thing.

As previously mentioned, the dynamic 25-year-old brings more to a team than just goals. He's also a creative outlet and something of a pressing fiend.

On average, 35 per cent of his passes go forward, showing he’s always looking to progress play. He’s playing a high number of key passes and he can also dribble past a man, meaning there are a variety of ways he can beat the defensive lines.

For context, Dele Alli, another attacking midfield similar to Fernandes, plays just 25 per cent of his passes forward, an average the great David Silva has managed during the 2018/19 campaign too.

Yes, they’re playing in different leagues, in different systems and, arguably, in different roles. But that stat shows Fernandes is always looking to make something happen. He’s a creative force as well as a goalscorer. An invaluable combination in the modern game.

He’s not just good going forward, either. He also chips in defensively. On average, Fernandes wins the ball back on 3.35 times per 90 in the middle third, showing he’s comfortable in a pressing system and having to win the ball back before it reaches his defence.

Fernandes might not hit the heights he reached in Portugal while playing for United but he's still a significant upgrade on the current bunch of midfielders at Old Trafford. He could quickly establish himself as a main attacking hub for the Red Devils.

If he does, Fernandes will have been worth the wait.