When José Mourinho was spotted in the crowd watching Croatia take on Ukraine in Zagreb in March, speculation immediately began over which player he was there to assess.

It has since been widely reported that the Manchester United boss is desperate to sign Inter Milan winger Ivan Perišić with the Nerazzurri are holding out for €50million.

Perišić is reportedly keen to complete a switch to Old Trafford even though terms are yet to be agreed between the two clubs.

However, Calciomercato reported earlier this summer that United are also interested in Perišić’s team-mate Marcelo Brozović, also of Inter, with a view to a summer move for the midfielder. The 24-year-old has a €50million release clause in his contract at the San Siro.

The Red Devils boss insisted at the time he was not in Zagreb on transfer business. But the protestations were clearly a smokescreen. “I have no hidden cause,” he told HNTV. “I just came to enjoy my free days and visit some friends like Predrag Mijatović and Davor Šuker.”

“I know everyone believes I came to watch some players, but in football today you don’t have to travel around in order to see some players, I know all of them well.”

There is no doubt Perišić and Brozović are high-quality players who would improve most squads. But Mourinho would be wise to steer clear of one Nerazzuri star and focus his pursuit on the other.

A goal-scoring winger with a proven track record in Belgium, Germany and now Italy, Perišić is a fine player, and his performances at last summer’s European Championships with Croatia were further evidence of that.

Not the type of wide man blessed with tremendous pace or capable of dribbling beyond multiple opponents, rather the former Borussia Dortmund man has carved out a niche for himself as a right-footer on the left flank who is an expert at arriving at the back post to dispatch scoring opportunities with aplomb. Few players are able to ghost into the space between the opposition's centre-halves and full-backs as well as Perišić. 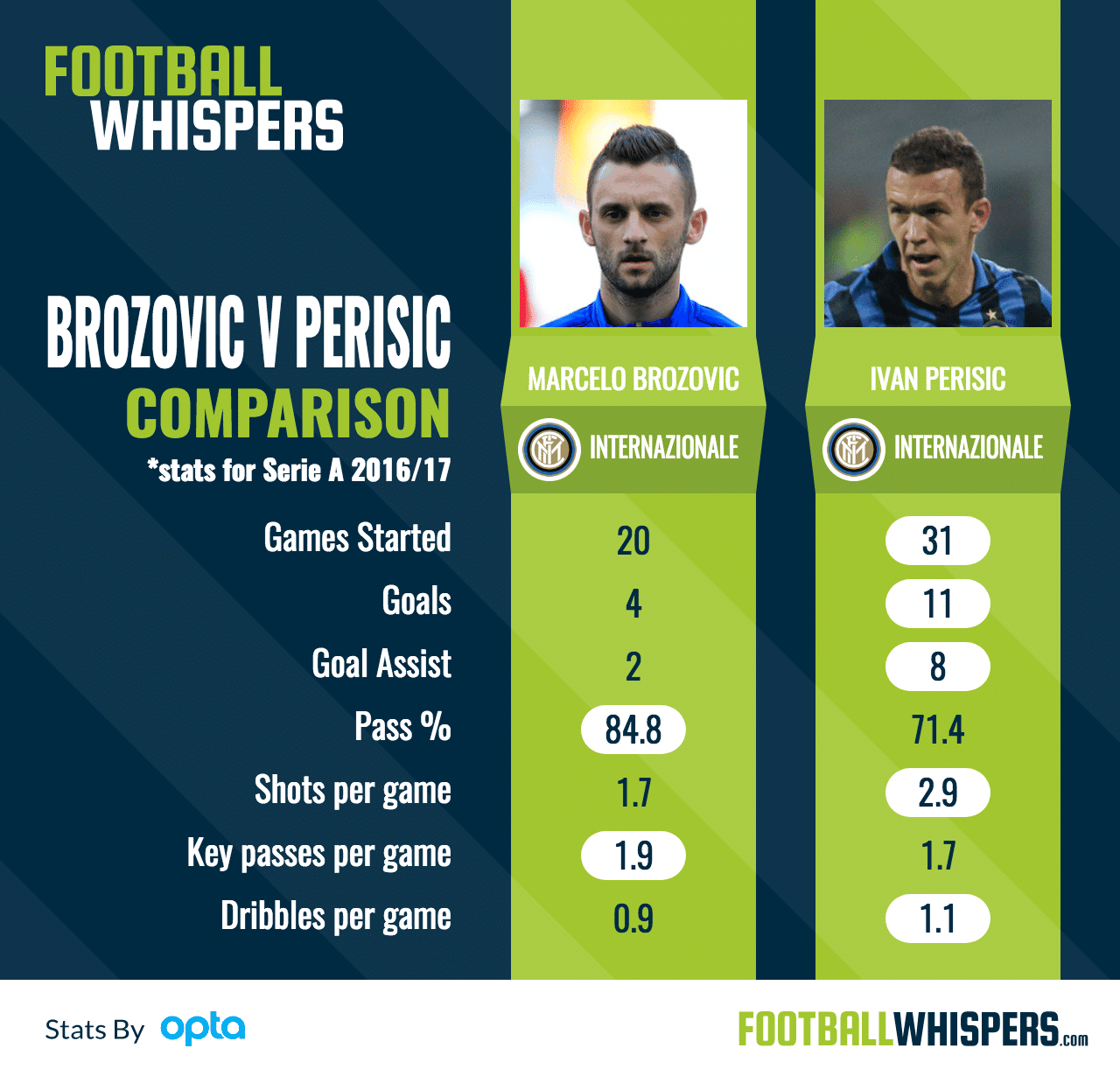 With United struggling to finish the chances they are creating this term – Mourinho’s men ranked 17th in the Premier League last season for chance conversion – bringing in a player of Perišić’s ilk seems like a no-brainer.

But the left wing spot in United’s line-up has been a breeding ground for young talent over the last few seasons, with Memphis Depay, Anthony Martial and Marcus Rashford all occupying the role with varying degrees of success.

To bring Perišić in now, at 28, would limit the game time of Rashford and, in particular, Martial.

The gifted 21-year-old Frenchman was a revelation in his first season at Old Trafford but has experienced a difficult sophomore campaign. After investing an initial £36million – potentially rising to as much as £58million – in acquiring the player from Monaco, United need to give Martial every opportunity to develop into a top star. With Perišić on the scene, that might prove impossible.

Unlike Perišić, Brozović’s arrival at Old Trafford would not be encumbering any young prodigies. As a box-to-box central midfielder, the Inter man would be adding depth to a position in which United are currently short of numbers.

Capable of playing deep in a double pivot or higher up in an attacking midfield position, Brozović is at his best either side of a deep-lying playmaker or defensive midfielder in a 4-3-3 formation.

Record signing Pogba has nailed down a spot of the left of the midfield three when Mourinho utilisies a 4-3-3 shape, so Brozović would come in to compete for a starting berth with Herrera on the right side.

Tenacious, hard-working, technically gifted and creative, the former Dinamo Zagreb man has all the tools to succeed in such a position at Old Trafford.

At 24, Brozović’s best years are ahead of him, but he also has the high-level experience to come straight into the Red Devils squad and contribute.

His €50million release clause might seem a little steep, but Inter would likely be willing to negotiate a lower fee and still make a huge return on a player they signed for just €8million.

He may not be the marquee name that many United fans are dreaming of this summer, but Brozović would be an astute signing for Mourinho.