Ole Gunnar Solskjær’s mind has been made up. In the summer, the Manchester United boss, who was visibly angry following his side’s 4-0 defeat at Everton last weekend, will need to bring in several quality additions.

His squad, though expensively assembled, is lacking in key areas. Results over the last few weeks have proved that.

The humbling at Goodison Park, in particular, highlighted United’s defensive deficiencies. Perhaps their most obvious weakness this season has been at right-back, where several players have been tried, mostly unsuccessfully.

Antonio Valencia, back from injury but out of favour under Solskjær, is expected to leave the club in the summer. Ashley Young has played much of this campaign at full-back but has often looked uncomfortable. Diogo Dalot, too, has been utilised in the position. And on Sunday, it was the turn of Victor Lindelöf.

This rotation is hardly ideal. It is not surprising, then, that United are prioritising a new right-back in the summer transfer window. They have been heavily linked with Crystal Palace’s Aaron Wan-Bissaka, who has had an exceptional season with the Eagles, and Tottenham Hotspur’s Kieran Trippier.

The latest, though, is United could move for Paris Saint-Germain right-back Thomas Meunier. The Belgian, who has been frustrated with his lack of starts under Thomas Tuchel, could be available for a cut-price fee – certainly far cheaper than both Wan-Bissaka and Trippier – this summer.

How, then, does the Belgium international compare with United’s other targets? The first thing to consider is Meunier is 27-years-old, a player in his prime. Trippier, meanwhile, is a year older while Wan-Bissaka is still relatively inexperienced at 21.

Meunier, likely because of the system he has been deployed in at PSG, is the most adventurous of the three full-backs.

In Ligue 1 this season, he has averaged 2.98 touches in the opposition box and created 0.37 big chances per 90 minutes. Tripper completes far more crosses than the Belgium international – 2.22 per 90 compared to 0.55 – but the two are similarly productive in chance creation: Meunier’s expected goals assisted per 90 of 0.21 is only slightly better than Trippier’s 0.2. 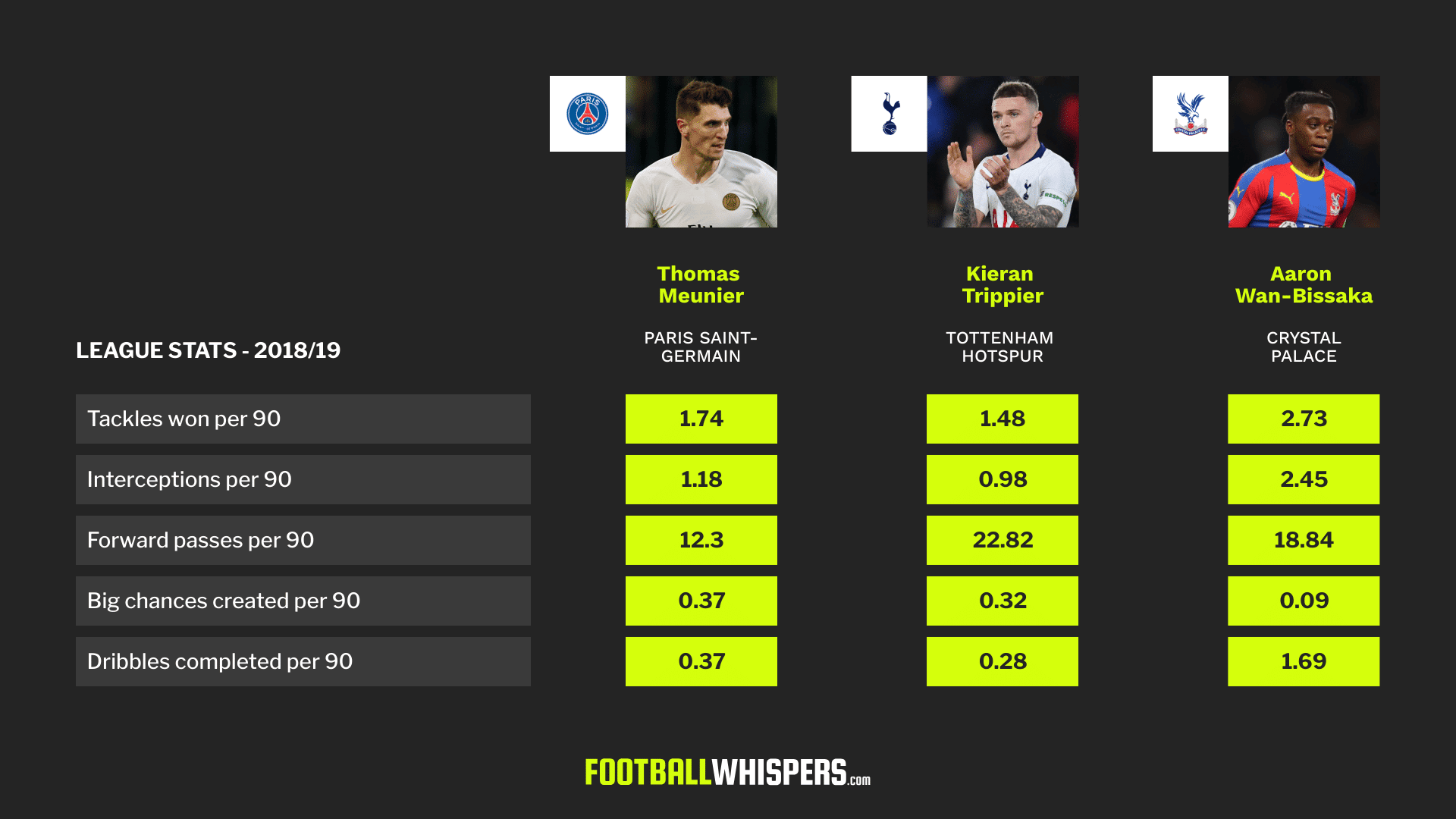 Wan-Bissaka, meanwhile, has caught the eye primarily for his defensive work for Palace. In a side based on discipline and rapid counter attacks, it's not surprise the England under-21 international can't compete with Meunier and Trippier in an attacking sense.

He would, though, be a more reliable presence at the other end of the pitch. Wan-Bissaka has completed an average of 2.73 tackles per 90 this season, compared to Meunier and Trippier’s totals of 1.74 and 1.48 respectively. He has also won an impressive number of defensive duels (7.38 per 90) and possession turnovers (1.38 per 90).

United must decide which attributes they consider most important in a right-back, and which player represents the best value for money. Trippier and Wan-Bissaka have proven themselves consistent Premier League performers, but that inevitably means a big price tag will be placed on their heads by Palace and Spurs. There are concerns, too, that signing Wan-Bissaka might stifle the development of the promising Dalot.

Meunier, who is out of contract in 2020, is unlikely to command such a hefty fee. He would be a welcome addition of both quality and experience, and his recent comments suggest his PSG career is soon to come to an end.

“Am I unhappy about being a sub more often than a starter? Of course, like any competitor would be. I have my theories as to why but don't want to go into them,” he said in an interview with Belgian newspaper l'Avenir.

“I have a year left on my contract, no point creating a fuss. As to extending contract of leaving? Good question. Discussions are going slowly. I get that my case is not a priority but since nothing has moved, the message seems pretty clear to me.

“I've never hidden [my desire to move to the Premier League] and there is interest, but there's been interest from everywhere, including China and the Middle East.”

United's work in the transfer market has certainly been questionable in recent years, but moving for Meunier would be a shrewd piece of business. He's the ideal age, more than good enough, and keen on a switch to England. Perhaps most importantly, though, he's available at a discounted price. It's time for Ed Woodward to think smart.