It was half a lifetime ago that a fresh-faced, 17-year-old Gerard Piqué left Barcelona to join Manchester United.

His time at Old Trafford was relatively brief, returning to Barça, the club he has always supported and harbours ambitions of someday leading as president in the summer of 2008. But those seasons in Manchester, under the guidance of Sir Alex Ferguson, proved formative for the young defender.

Now 32, Piqué returns to the Theatre of Dreams for the first time as an opposition player on Wednesday night, older, wiser and established as arguably the greatest centre-back of his generation.

Piqué also arrives back at Old Trafford in the midst of one of the finest individual campaigns of his entire career.

The teenage Spaniard arrived at United in the summer of 2004, bare-cheeked and shrunken beneath a mop of highlighted hair, alongside Giuseppe Rossi, a gifted Italian striker of the same age signed from Parma.

It was an era in which Premier League clubs were beginning to cast their recruitment nets across the continent at youth level, flexing their riches to attract Europe's best young talent before they signed professional deals in their native lands. 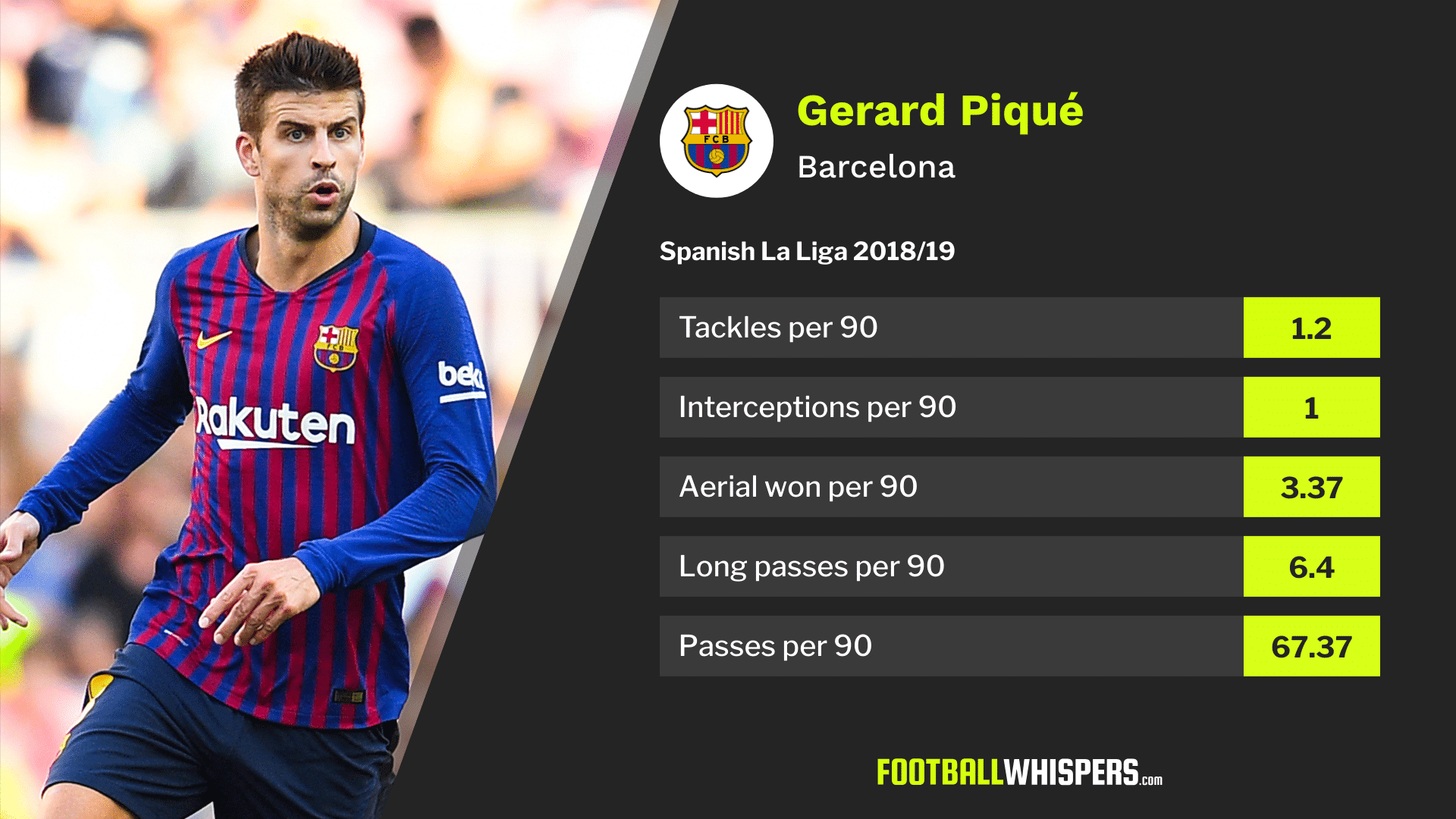 Although his maturity, intelligence and technique were always abundantly obvious – and never more so than during a successful spell on loan with Real Zaragoza in 2006/07 that saw him play in central midfield – Piqué was never able to establish himself as a first-team regular with United, his pathway blocked by Nemanja Vidić and Rio Ferdinand.

In his first season back at Barcelona, Piqué made more senior appearances (28) than he had in the entirety of his spell in England (23). From rarely used back-up in Manchester, the young defender was immediately a regular starter back home, making a mockery of United's reluctance to rely on him by helping Pep Guardiola's men claim a treble.

He remains reverent of his four years in England, though, richer for the experience. “I arrived at Manchester United a boy, and I left a man,” he wrote in a 2018 piece for The Players' Tribune.

To crown a dream season back with Barça, Piqué started in the Champions League final, defeating his old employers 2-0. Barcelona dethroned United as champions of Europe that night in Rome. Just a year after he had been left out of United's squad for the 2008 Champions League final, he was 22 and considered among the best defenders in the world.

Piqué and Barcelona – inextricably linked for the last decade – have added to their legacy since, claiming two more Champions League crowns, with United again falling prey to Guardiola's bewitching Blaugrana at Wembley in the 2011 final.

On the international stage, where his strong Catalan identity and outspoken anti-Real Madrid stance often made him an unpopular figure, Piqué won a World Cup in 2010 and a European Championship two years later.

A consistent factor in Barcelona's success since he returned to the club, Piqué has remained a reliable leader, a passionate pounder of the Barça drum, and, above all, an exceptional central defender.

I’m coming back to my second home. @ManUtd https://t.co/MTOsM4afvO

Yet still, at 32, he seems to have found room for further improvement this season. After as spell of 18 months of indifferent form, culminating in a poor showing at last summer's World Cup, it seemed Piqué's best days were behind him – still worthy of his place at the Camp Nou, but beginning to suffer the inevitable corrosion of such an extended period at the summit of the game.

But not only has Piqué recaptured his best form this season, he's redefined it.

Lionel Messi – another of Piqué's cohorts in a Barça youth side that came to be known as the “Baby Dream Team” in the early 2000s – has scored 43 goals and registered 23 assists in 40 all-competitions appearances this season. The greatest player of all time has never been greater, and he is, entirely accurately, lauded as being the biggest single reason why Barcelona are currently on course for a third treble in 11 years.

After Messi, though, there has been no individual more vital in Barça's success under Ernesto Valverde this season than Piqué.

He may have been quicker in previous years, but that's immaterial as his positioning is now flawless; he's rarely called to sprint. He's a dominating presence in the air, eminently confident and comfortable on the ball and is the coolest man in the stadium when his team are under stress.

Only Atlético Madrid (21) have conceded fewer La Liga goals than Barcelona (31) this term, and the defensive success of Diego Simeone's men, although they have great individual defenders, is systematic; that's not the case with Barça.

Sergio Busquets, while still a wonderful orchestrate from deep, no longer protects the back four as effectively as he used to, and the full-backs, Jordi Alba, Sergi Roberto and Nélson Semedo, are attack-minded, racing free of their defensive station at every opportunity.

That leaves Piqué and new partner Clement Lenglet to fend as a pair. And the former has done an impeccable job of guiding the latter through his first season at the Camp Nou, doubtless remembering lessons in leadership passed down by Carles Puyol.

Evidence, were any needed, of Piqué's importance to Barça came in the club's last two league games: when Piqué was rested for the first time this season during the midweek away trip to Villarreal, the Catalans shipped four goals in 4-4 draw; he returned for the visit of second-placed Atlético to the Camp Nou on Saturday and secured a clean sheet, strolling through the 2-0 victory.

On Wednesday night, in the first leg of the Champions League quarter-final between Barcelona and Manchester United, Piqué will be back at Old Trafford, returning to what he referred to on Twitter recently as his “second home”, completing the circle. The highlights are gone, the cheeks furred, the potential fulfilled.