Manchester United’s decision to part company with Alexis Sánchez and Romelu Lukaku this summer – without bringing in replacements – means their season hinges on whether Marcus Rashford and Anthony Martial can shoulder the goalscoring burden.

After matchday one of the new campaign, the gamble appeared a smart one. United romped to a 4-0 victory over Chelsea and the new strike partnership netted three of the four goals.

There appeared to be a real understanding between the duo with Martial thriving in his new central position.

However, since then Martial has added one goal to his tally while Rashford has failed to find the back of the net in the three matches he’s featured in. The England international also missed a penalty against Crystal Palace to compound his misery.

Heading into the international break, the Red Devils have amassed five points with draws against Wolverhampton Wanderers and Southampton sandwiching the defeat to the Eagles.

And according to reports in The Athletic, United boss Ole Gunnar Solskjaer isn’t happy with his strikers.

The Norweigan tactician is said to be frustrated by the duo's lack of killer instinct and their inability to score scruffy goals.

Is Solskjær right or is the United boss frustrated with the wrong part of his team? In this piece, we attempt to find an answer.

Before getting into this, there are a few caveats. Firstly, the sample size isn't the largest and that means it's not wise to read too much into the numbers. Secondly, we're looking at open-play actions only.

Solskjær wants his forwards to score scruffy goals and you can't exactly do that when taking penalties or direct free-kicks. 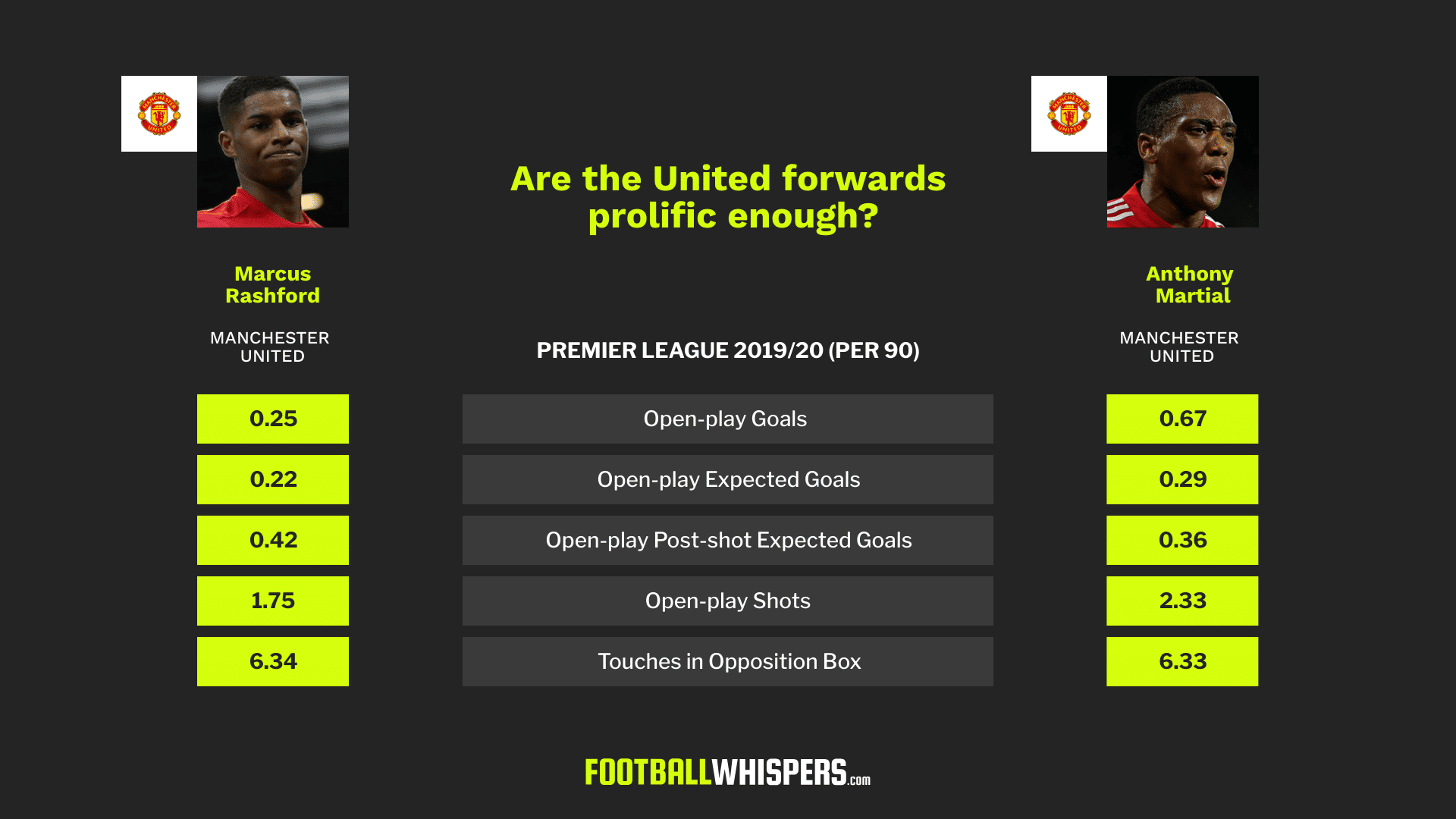 This stat gives a number to where efforts land on target, which enables us to see whether or not a player adds value to his shots. Rashford, so far this season, has done just that. The United No.10 has added 0.20 to his shots on a per 90 basis.

Martial's per 90 total of 0.67 goals is more impressive but the underlying numbers don't make for pretty reading if you're a United fan. The Frenchman has an expected goals average of 0.29 while his post-shot average is 0.36.

He, too, is adding value to his shots but the alarming part is his xG overperformance.

He's outperformed his expected goals by 0.38 and his post-shot average by 0.31. Elite strikers do this but given Martial has never had a run as a centre forward, there's no guarantee it's sustainable as yet.

On paper, the big concern for the Red Devils will be the fact Rashford is only averaging 1.75 open-play shots per 90.

However, when looking at his expected goals per shot total, which was 0.14, you see his downturn in shots isn't necessarily a bad thing.

His average is significantly down on Lukaku's 0.21 and the Belgian's sample size was much larger. Martial amassed 377 minutes as a centre-forward over this period and his average per shot was 0.25.

Essentially, Rashford is more wasteful so limiting the number of shots he takes isn't a negative if they're instead being taken by Martial. Having said that, United have a chance creation problem.

Between them, Martial and Rashford are averaging four open-play shots per 90. They aren't exactly peppering the opposition in that sense and the two strikers aren't missing countless opportunities.