Ole Gunnar Solskjær has now been Manchester United manager for over 12 months.

The former baby-faced assassin did enough, picking up six consecutive wins before going 12 matches without defeat, to turn his interim position into a permanent one after replacing José Mourinho in December 2018.

They, famously, knocked Paris Saint-Germain out of the Champions League, overturning a first-leg 2-0 home defeat to beat the French champions in the capital.

“Listen, Man United might not thank me but get the contract out, put it on the table. Let him sign it. Let him write whatever numbers he wants to put on there, given what he's done since he's come in. Ole's at the wheel, man. He's doing it. He's doing his thing. Man United are BACK.” 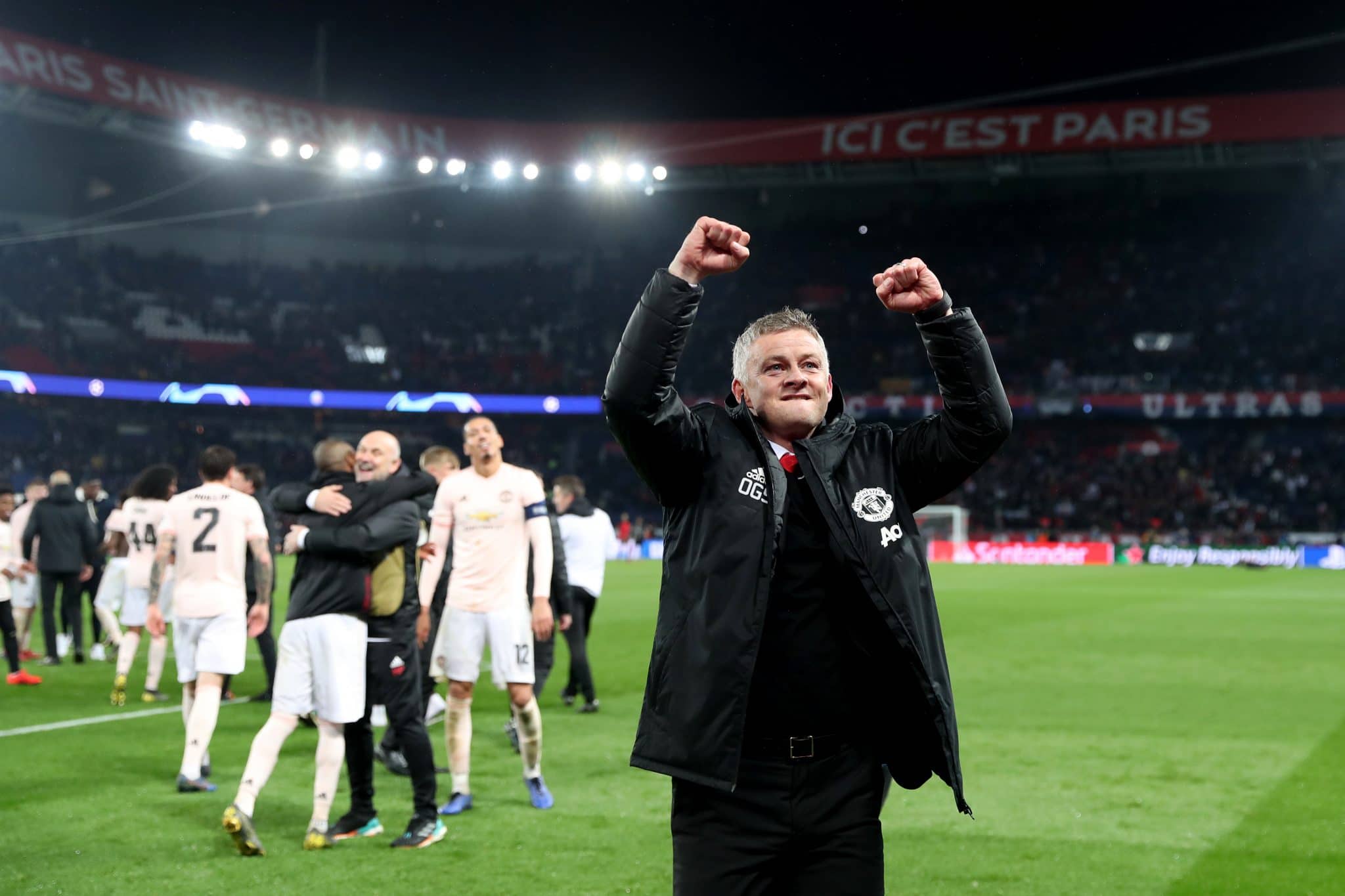 However, the Red Devils aren’t back. Since the turn of the year, United are winless. A 2-0 defeat to Arsenal kicked off 2020, a 0-0 draw with Wolverhampton Wanderers in the FA Cup and a 3-1 derby loss at Old Trafford has heaped the pressure on the Norwegian. The loss to Manchester City was perhaps the most damaging. The defeat wasn’t the problem. The manner in which they lost was.

In front of a home crowd, the Red Devils couldn’t get close to their neighbours. Solskjær’s United side usually perform in big ties and the former Cardiff City boss comes up with bespoke tactics to nullify the opposition.

He’s been able to mastermind victories over Tottenham Hotspur and City and, to date, he’s the only manager to take a point off of Liverpool this season. On one hand, it is positive. Being able to come up with ways to thwart rivals is a good trait to have. But it papers over the fact this side lacks an identity. In the defeat to Pep Guardiola’s side, it spectacularly backfired.

City had to settle for just a 3-0 lead at half-time. With better finishing, it could’ve been much, much worse. In the Premier League clash between the two sides, United hit their hosts on the break to claim a 2-1 win. In the Carabao Cup, the roles were reversed. And it was clear early on that Solskjær got it wrong. 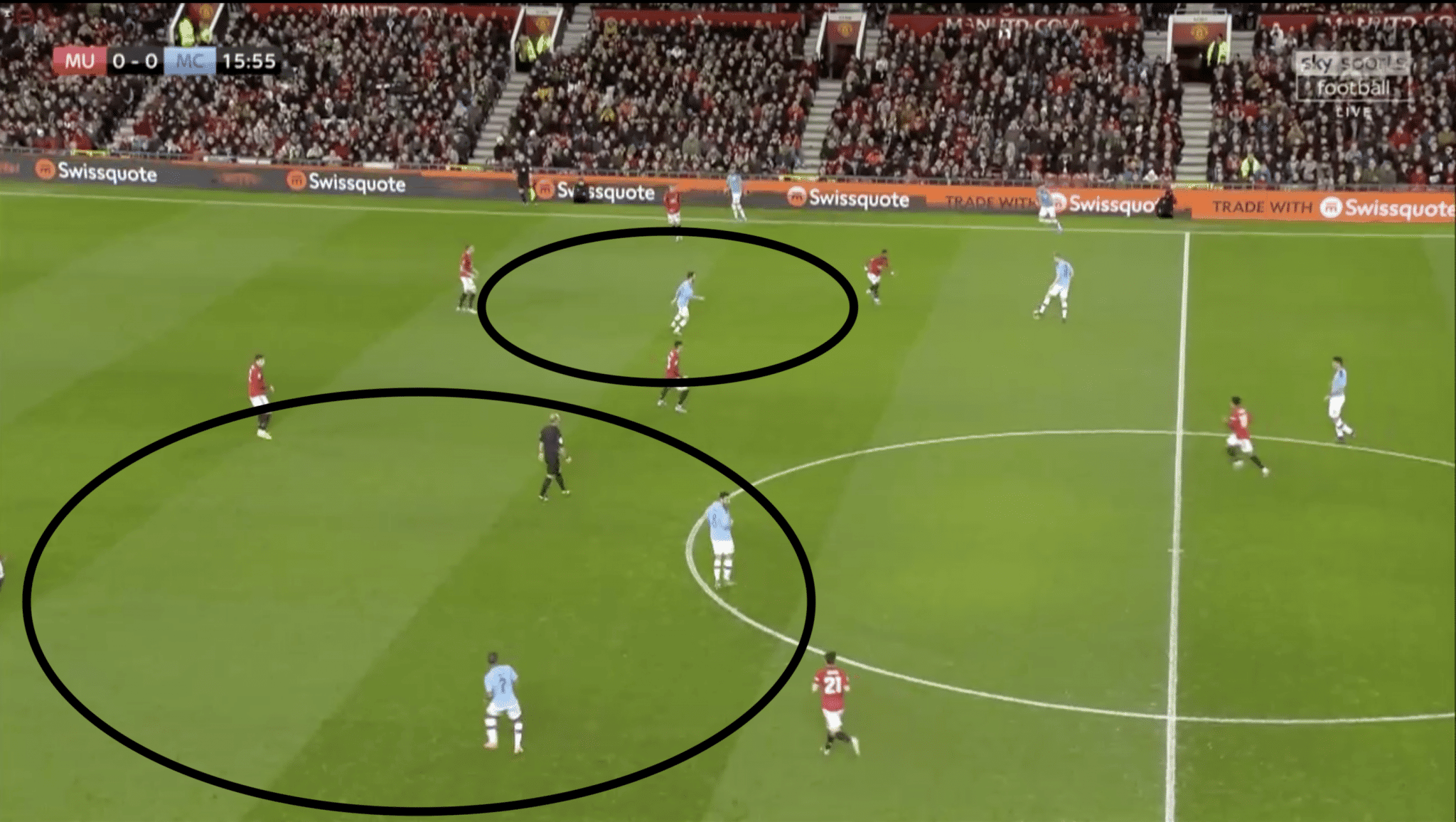 As shown in the image above, United failed to get the basics right. They weren't compact and they didn't cut off passing lanes. Bernardo Silva is circled between four players and, if Kevin De Bruyne wanted to, he could've been found with a simple pass.

Instead, the Belgian playmaker lays the ball off to Kyle Walker who carries the ball forward and into the space created by Riyad Mahrez hugging the touchline. The England right-back eventually picks out Silva who lashes a long-range effort beyond David de Gea for the opener.

The goal was unstoppable. But the build-up could've been handled much better. For example, Silva shouldn't be allowed such space between the lines and Raheem Sterling and İlkay Gündoğan shouldn't be allowed such freedom in the middle of the park. They aren't utilised in this move but a quick De Bruyne pass into the German's feet and City are attacking Aaron Wan-Bissaka. 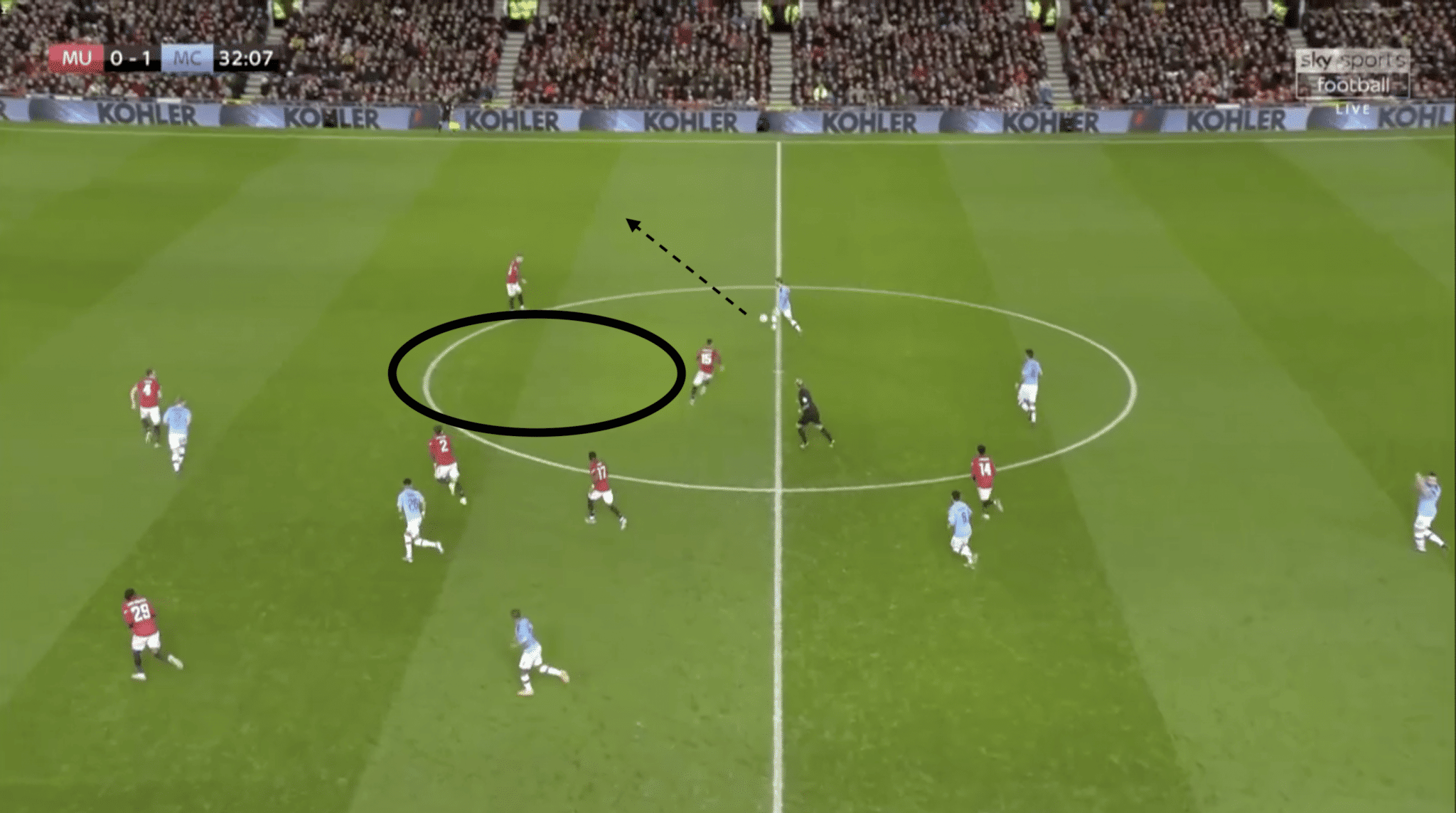 The second goal was just as bad from a United perspective. Silva picked up the loose ball in the centre circle. Andreas Pereira needs to block the centre of the pitch and force the Portuguese maestro wide where he's able to double up with Brandon Williams, especially with Fred not covering for the Belgian-born Brazil international. 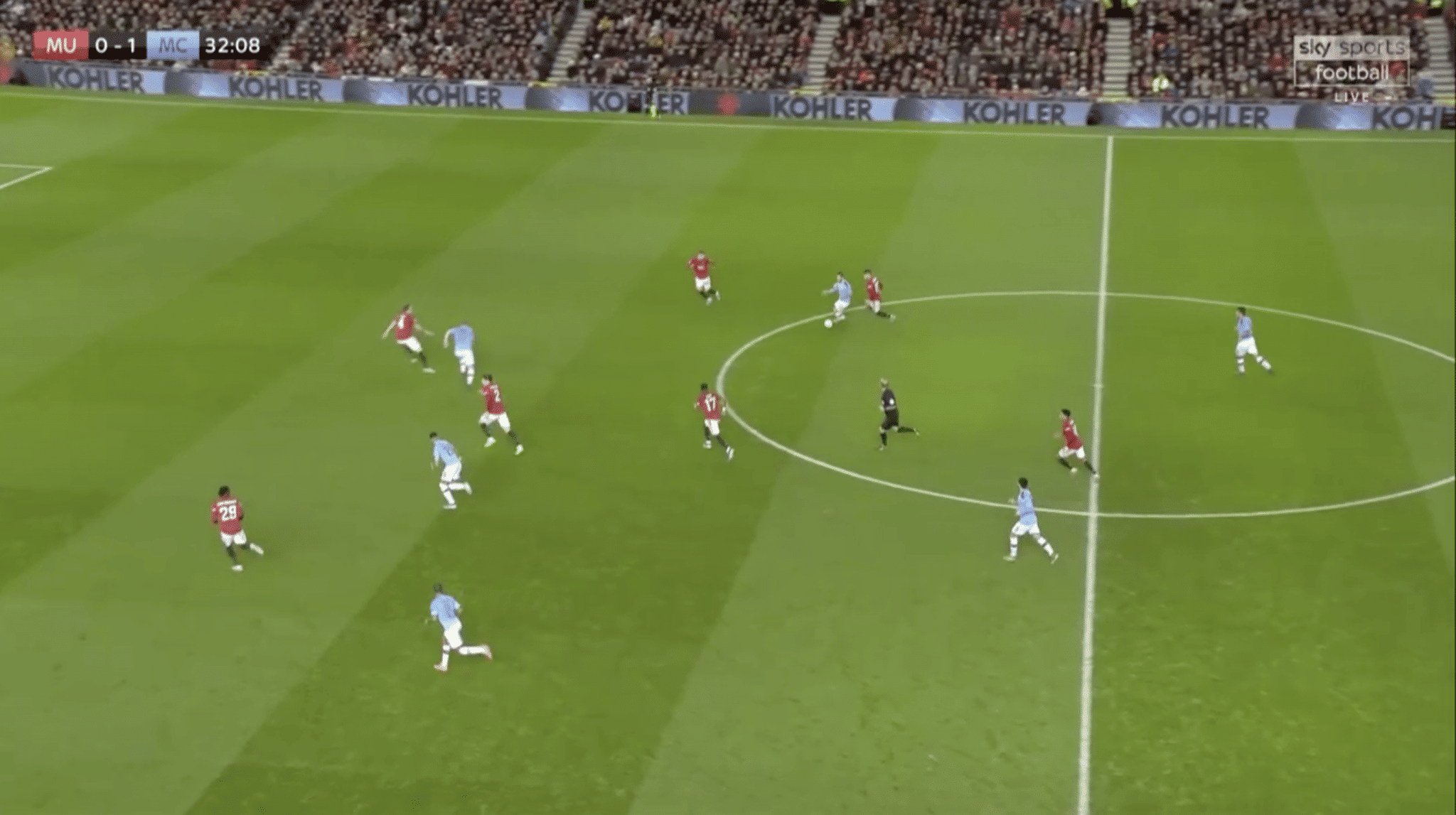 The United No.15 fails to do that and Fred isn't in a position to react to Silva cutting inside onto his favoured left foot. With Victor Lindelöf still trying to recover having won the initial ball, City have three attackers all bursting forward and Mahrez is in an ideal position to exploit the space the Swedish centre-back would normally be guarding.

United felt disjointed. It was a far cry from the side that managed to beat City at the Etihad earlier on in the season. It was as though some knew they had to defend while others just wanted to attack. Nothing exemplifies that more than the screenshot below. 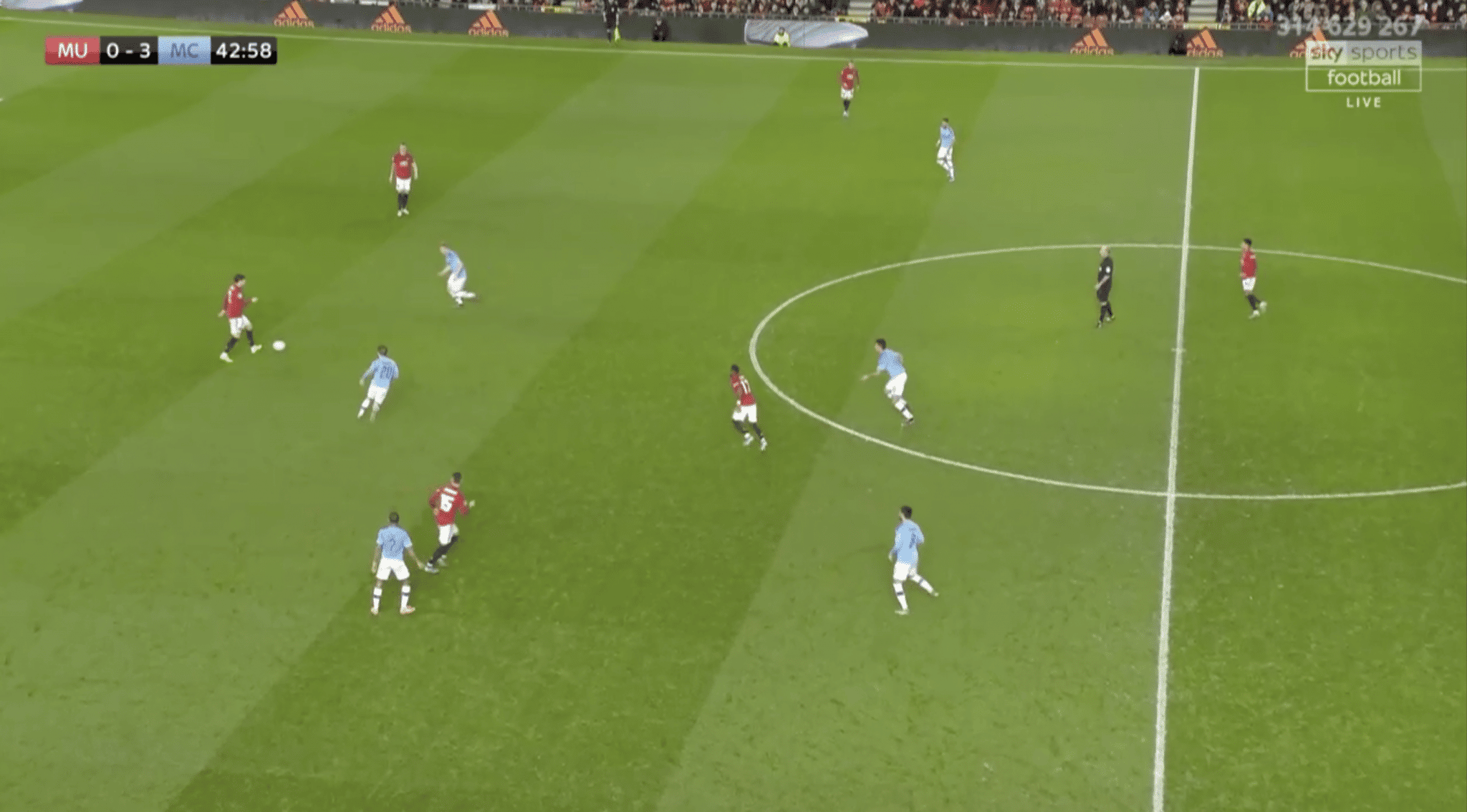 It is quite remarkable really. United were 3-0 down at home to their noisy neighbours with half-time just a few minutes away. The sensible thing would be to get to the break with the scoreline still the same. At the very least, they needed to make life difficult for the visitors. But they didn't. As you can see in the image, the hosts wanted to play out from the back but had zero structure in place. Lindelöf is in possession but City have blocked off all the passing lanes and are looking to close him down.

De Bruyne forces the United No.2 into a hurried clearance and Rodri capitalises. The ball is worked into a wide area for Mahrez to drive at the United defence. He effortlessly breezes into the penalty box before picking out Sterling. When the former Liverpool man connects, he's eight yards from goal with zero pressure on him. On another day, he passes beyond De Gea and City head into half-time with a four-goal advantage.

The reigning Premier League champions are one of the best teams around. When momentum is on their side they're difficult to stop but Solskjær had the majority if the first-half to react to this. He could've dragged Jesse Lingard into midfield so it was a three instead of a two. Alternatively, he could've made substitutions. Granted, he did at half-time but the damage was already done.

In isolation, such a defeat could be written off as a bad day at the office. But this isn't a one-off. United are 27 points off the top of the table having played a game more than Liverpool. They’re just six points ahead of 13th-placed Newcastle United. In fact, they’re closer to the bottom of the table than they are the top.

They regularly deliver in big games but they still lack consistency. Of their 21 games in the Premier League this term they've won eight, drawn seven and lost six. Nobody is expecting miracles from Solskjær but the team should at least have an identity and a clear style. Until this happens, they'll remain in transition and no amount of money spent in the transfer market will put an end to that.