At Old Trafford on Saturday it was Manchester United’s old boys that caught the eye. With Ben Foster in goal, Jonny Evans at the heart of defence and Darren Fletcher in midfield, three familiar faces returned to thwart their former teammates and earn West Bromwich Albion a hard-fought point.

Evans and Fletcher were offered a fresh start at the Hawthorns after their United careers came to an end and their exemplary performance back at Old Trafford was a measure of how they’ve excelled under Tony Pulis.

Foster, on the other hand, joined the Baggies after a two-year spell at Birmingham City. But his consistency and reliability between the sticks was plain to see as he denied Jose Mourinho a much-needed three points.

So how have the former Red Devils reinvented themselves and West Brom?

Two years ago, Evans’ United career was ended when Louis van Gaal informed him that his services were no longer required at Old Trafford.

The Belfast-born centre-half had been a United player since 2004 and suddenly faced a significant life change. Sir Alex Ferguson, his former boss, suggested that he accept an offer from Pulis at West Brom. Evans listened, and it has turned out to be an inspired decision.

Since joining the Baggies in 2015 Evans has re-established himself as one of the Premier League’s most under-rated defenders. He has formed an excellent partnership with compatriot Gareth McAuley and the duo have been crucial in the successes of both West Brom and Northern Ireland, who qualified for Euro 2016 under Michael O’Neill.

To think we kept Jones and Smalling over Jonny Evans because they are 2 England internationals. Evans has been unbelievable for WBA

Evans’ performances this term highlight his steady progression under Pulis. He has averaged 1.73 tackles won per game, up from last season’s 0.91. He has also won more aerial duels, with 64.29% up from 60.42%. His interceptions per game have increased from 2.50 to 3.07. They are numbers that support the idea that Evans is defending with confidence and focus, attributes that have helped them tighten their grip on eighth place, eight points ahead of Stoke City.

Against his former side Evans was rock solid. He won all of his aerial duels as well as making three interceptions, two blocks and 14 clearances – all without committing a foul. Evans was class personified throughout the game, organising the defence expertly as he showed leadership abilities as well as positional discipline to shut out United and help his side keep a clean sheet. 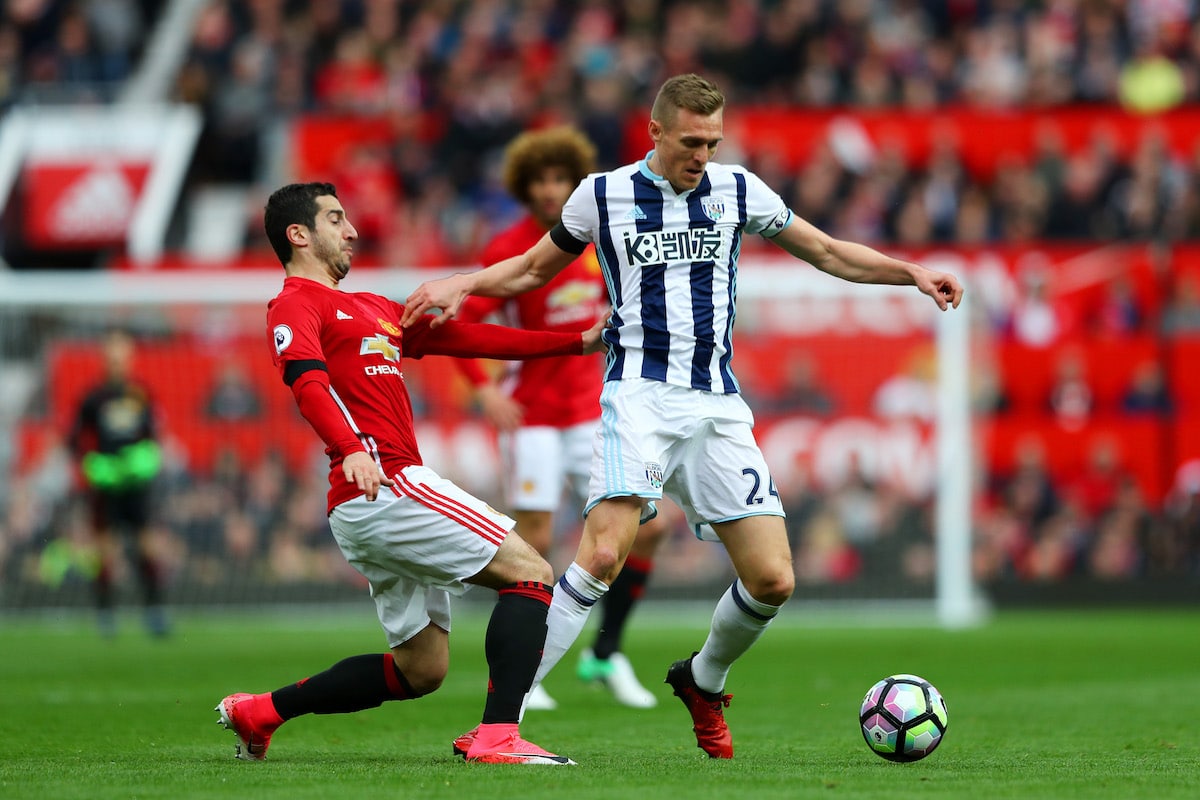 Fletcher, now 33, looked as energetic as ever in the middle to give the Baggies that extra muscle in front of the defence. After 12 years at United, Fletcher has reinvented himself at West Brom and the club have already offered him a new contract.

Fletcher landed all of his tackles as he worked tirelessly to stop United breaking down the Baggies' resistance. He almost capped a fine return to Old Trafford with a rare goal when his speculative effort from distance was fumbled onto the crossbar by David de Gea.

With @ManUtd players dropping like flies, amazing to think Darren Fletcher has not missed a game since joining West Brom over 2 years ago.

It’s a testament to Fletcher’s mental strength and sheer iron will that he overcame ulcerative colitis, the chronic bowel disease that almost forced him into early retirement, to make his 83rd consecutive start for the Baggies on Saturday afternoon. That, more than anything, underlines how highly Pulis values him. Fletcher has remained the constant heartbeat of their midfield – Pulis’s trusted on-field lieutenant.

West Brom supporters will be concerned to learn that Fletcher is considering his next move. Although he’s been offered a new deal, the Scot is reportedly weighing up offers from MLS. Should he leave, it would be a hammer blow for Pulis and a remarkably difficult job to replace him – another stellar performance against United proved that.

TP: "@BenFoster has been smashing all year. He better have brought the cakes in on his birthday!" #WBA

West Brom’s star performer, though, was Foster. Once again the former England international showed his impressive range of shot-stopping abilities and commanding presence in dealing with crosses into the box.

Foster, who celebrates his 34th birthday today, made a couple of impressive saves to deny Marcus Rashford and also got the better of Henrikh Mkhitaryan, maximising his frame to thwart the Armenian in a one-on-one situation.

Although West Brom defended tightly, United were always going to create chances considering their dominance. However, the one time they sliced the Baggies' defence open, Foster was there to frustrate United and clinch a point that left Mourinho berating his attackers in his post-match comments.

That’s not the first time Foster has come to West Brom’s rescue this season, of course – he made a terrific stoppage-time double-save against Bournemouth to clinch a dramatic win for the Baggies. After the game, Pulis described his number one as ‘top drawer.’ He certainly lived up to that billing once again to deny his former employers.

Pulis’s side have consolidated their place in the top-half of the table and, with games against Watford and Southampton on the horizon, the Baggies will be confident of adding to their 44-point tally and breaking a club record for points in the Premier League which stands at 49.

However, they have a tough run-in with fixtures against Liverpool, Manchester City and Chelsea still to come. Those encounters with the league’s heavyweights will be daunting. But if Pulis can keep his United old boy spine performing at such impressive levels it won't be a surprise if they produce a few more big performances to take points off the teams above them.