Ever since he landed on European shores, signing for AS Roma from Corinthians in 2013, Brazilian defender Marquinhos has been regarded as one of the best young centre-backs. A long-term transfer target for Manchester United, this could finally be the summer they get their man.

Téléfoot, a weekly football show on French TV channel, TF1, reported this weekend that United, Manchester City and Barcelona have all tabled bids for the 22-year-old.

Reports suggest that the fee is somewhere around the £55million mark and they believe it could be enough to convince Paris Saint-Germain to do business.

The reason why he might leave at the end of this season is that despite numerous offers of a new contract. His current deal runs till 2019 and the Brazilian has turned down several extensions and it is believed Marquinhos doesn’t want to sign a new deal with les Parisians. 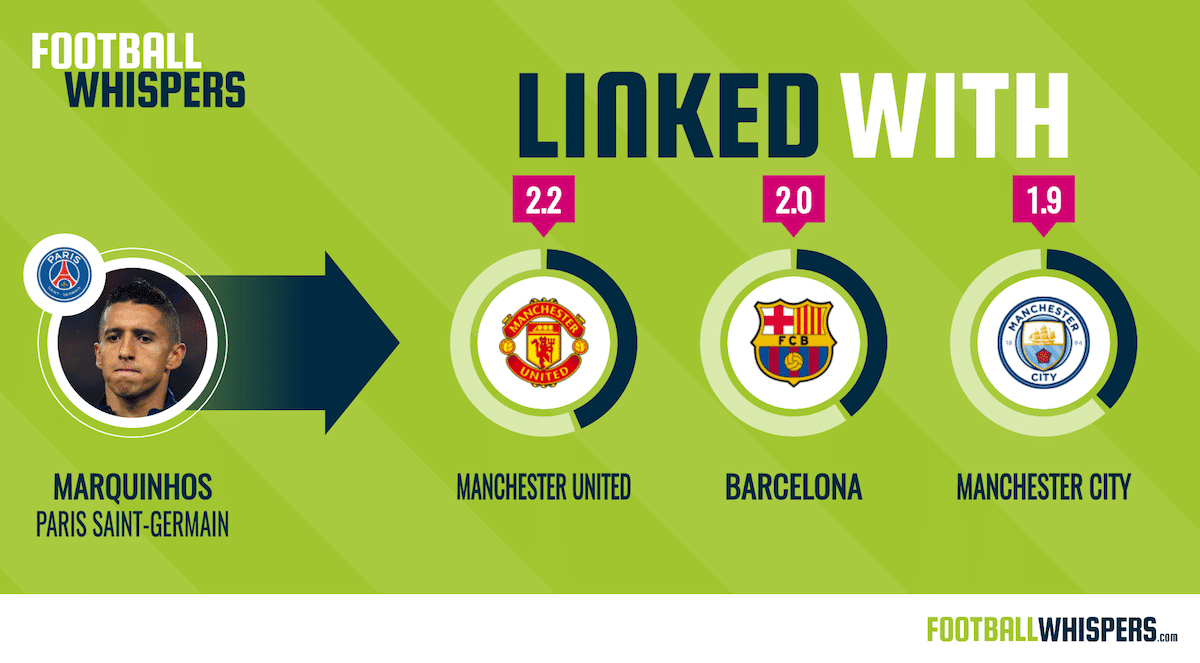 It was only seven months after moving to Rome for £5million that PSG pounced, spending £27million on the teenager. The club already had Thiago Silva, Alex and Mamadou Sakho in the same position, but touted as a star of the future, Marquinhos would take his time and showed a lot of patience in earning a starting spot.

Playing beside his countrymen helped, as did the arrival of David Luis from Chelsea. Injuries to Silva gave him an opportunity to play, he even covered at right-back, anything to gain minutes on the pitch.

This is Marquinhos’ fourth season in the French capital and he has now played over 100 games, starting 83 times. Despite playing behind the other Brazilians, many started to believe that the youngest defender was already surpassing Silva and definitely outshining Luiz. Leading to the big-haired centre-back being sold back to the London club.

It’s testament to the 22-year-old that someone so young has established himself as a guaranteed starter in the French champions team.

His situation has taken a recent turn for the worse and it was only in March that he spoke about his desire to stay in Paris:

“It's not only up to me but my contract here runs until 2019 and from my point of view everything is pretty clear, I want to stay at PSG.”

Is Marquinhos worth £55million? 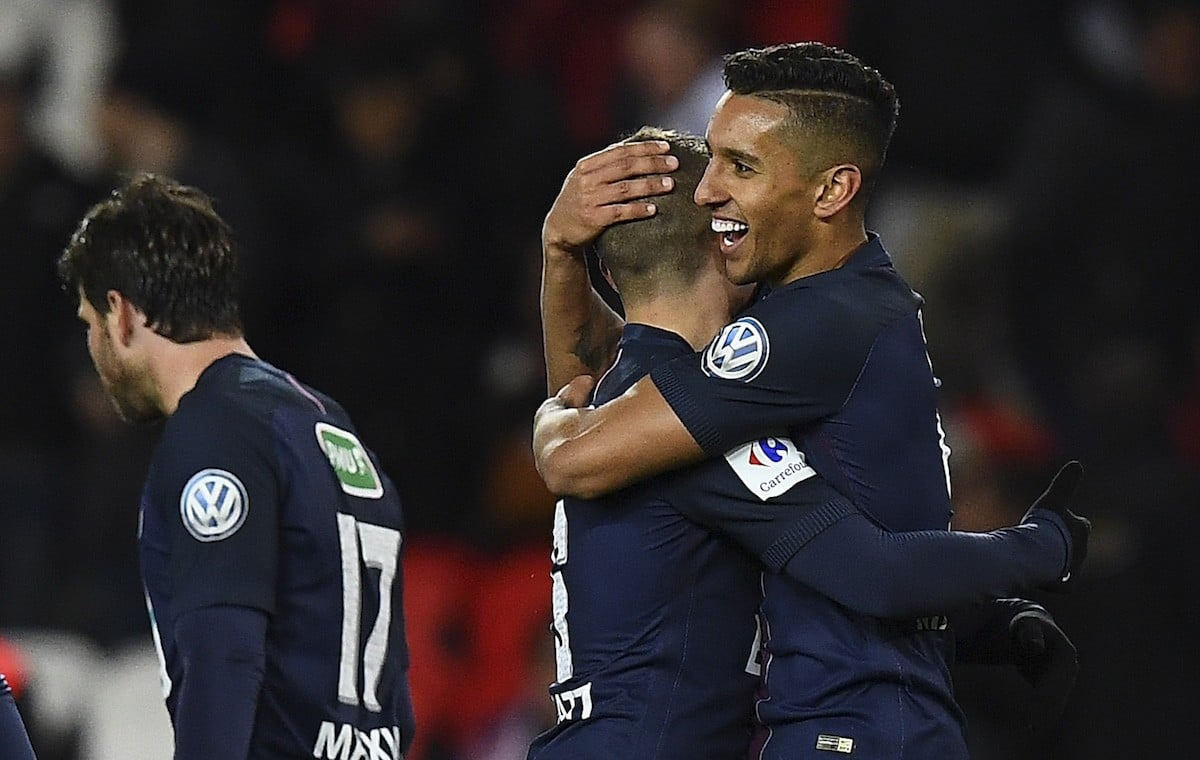 What do you get for £55million? Well, easily one of the most promising centre-backs in the world. The first part of his game that catches the eye is his positioning. For someone still learning his position, he rarely gets caught in the wrong area of the pitch.

Marquinhos has great pace, but rather than use it to recover, he makes sure he’s in the right place at the right time.

Over the past three seasons, the defender has only made five errors that have led to goal scoring opportunities for his opponents. That drills down to just one this year, once again cutting down on mistakes and improving.

Playing in Ligue 1, for a team as dominant as the Parisians, it is easy to become complacent and lose concentration, especially as current champions hold possession and constantly pass the ball around.

Against Metz, Marco Verratti and Thiago Motta uncharacteristically lost the ball in a dangerous position. As quick as a flash, although on the back-foot seconds before, Marquinhos reacts quickest and recovers the situation and wins the ball. 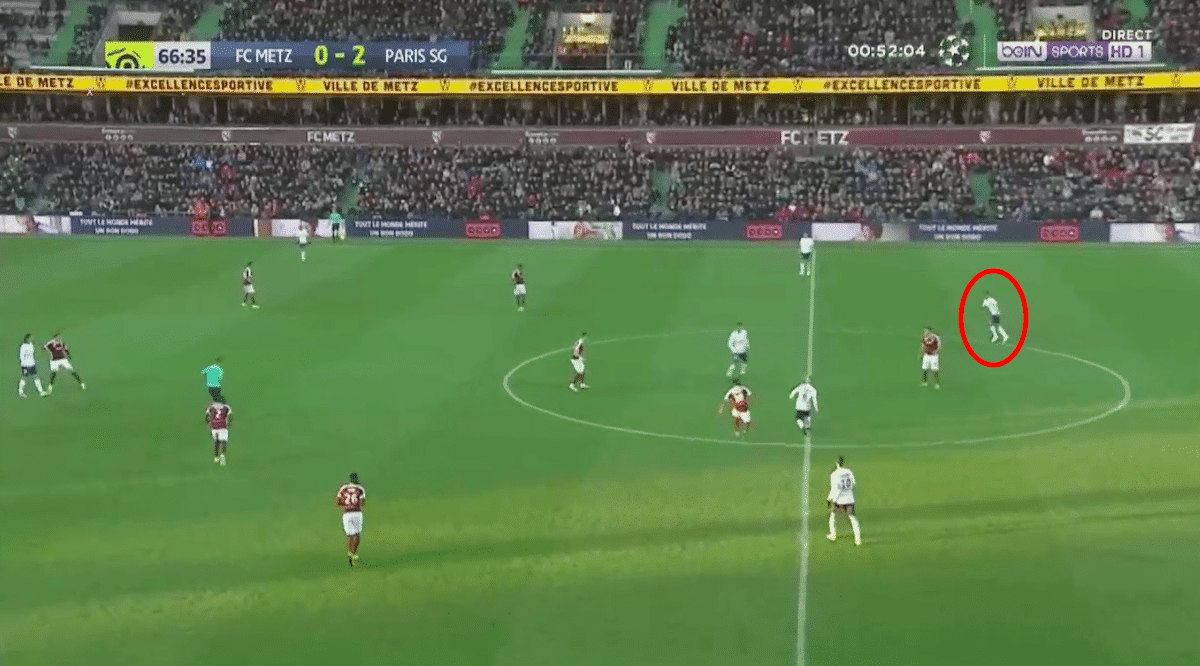 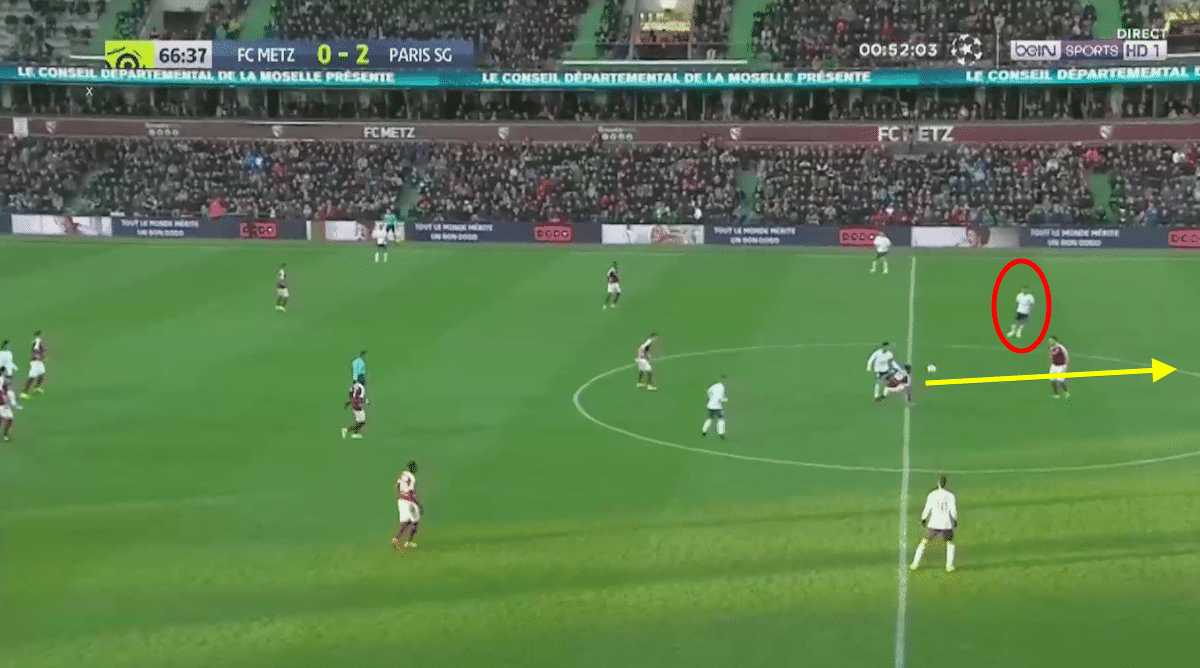 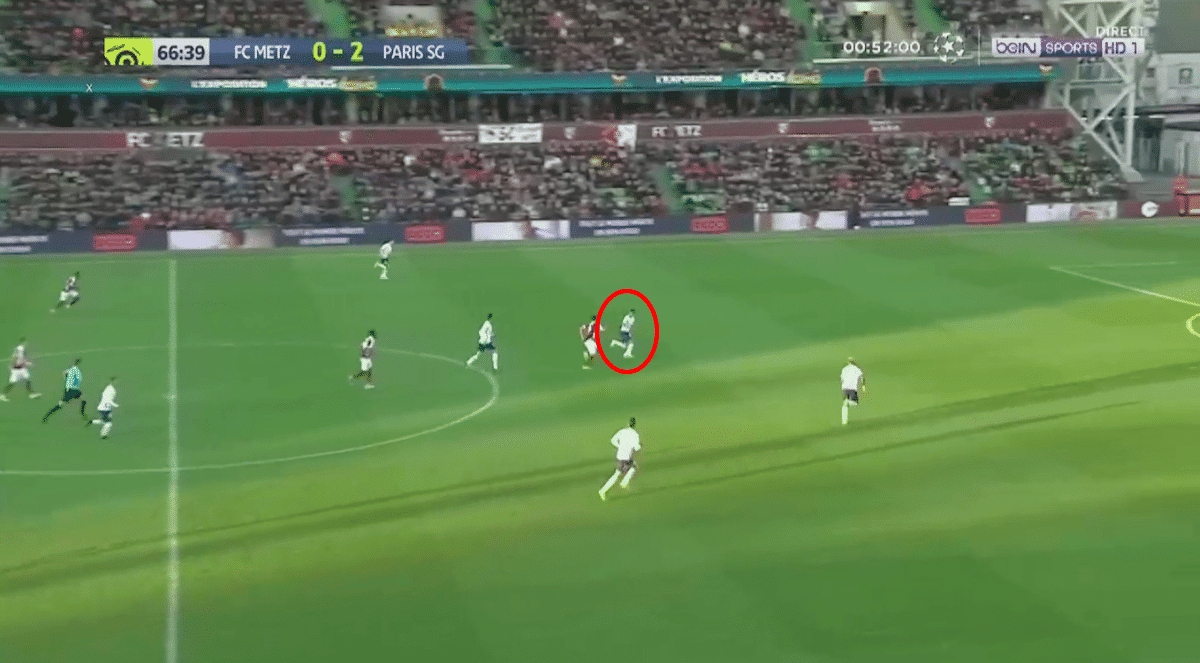 “I am not sure who is convincingly better than him in defence at the moment,” said super-agent Kia Joorabchian after the defender was named as one of the 50 best players of 2016. “He is already at Sergio Ramos’s level, for sure, and I think he could be the best in the world. He is still only 22-years-old.”

Something that has become clear, watching Marquinhos develop under the bright lights of the Eiffel Tower, that despite all his energy and speed, he is an excellent one-on-one defender.

There are still elements of his game that he can improve: he can sometimes be too keen to rush into the back of attackers. He doesn’t impede them – only makes 0.4 fouls per 90 minutes – but he can get turned, or make it easy for the forward to lay the ball off and then the Brazilian has to rush back.

However, when he gets in right, and even when he is too keen, he has the upper-body strength to hold off the bigger attackers, but the speed to keep up in a foot race with quick wingers.

Against Barcelona, with the game at 3-1 and on a knife’s edge in the Nou Camp, Marquinhos was tracking Lionel Messi’s run through the middle. 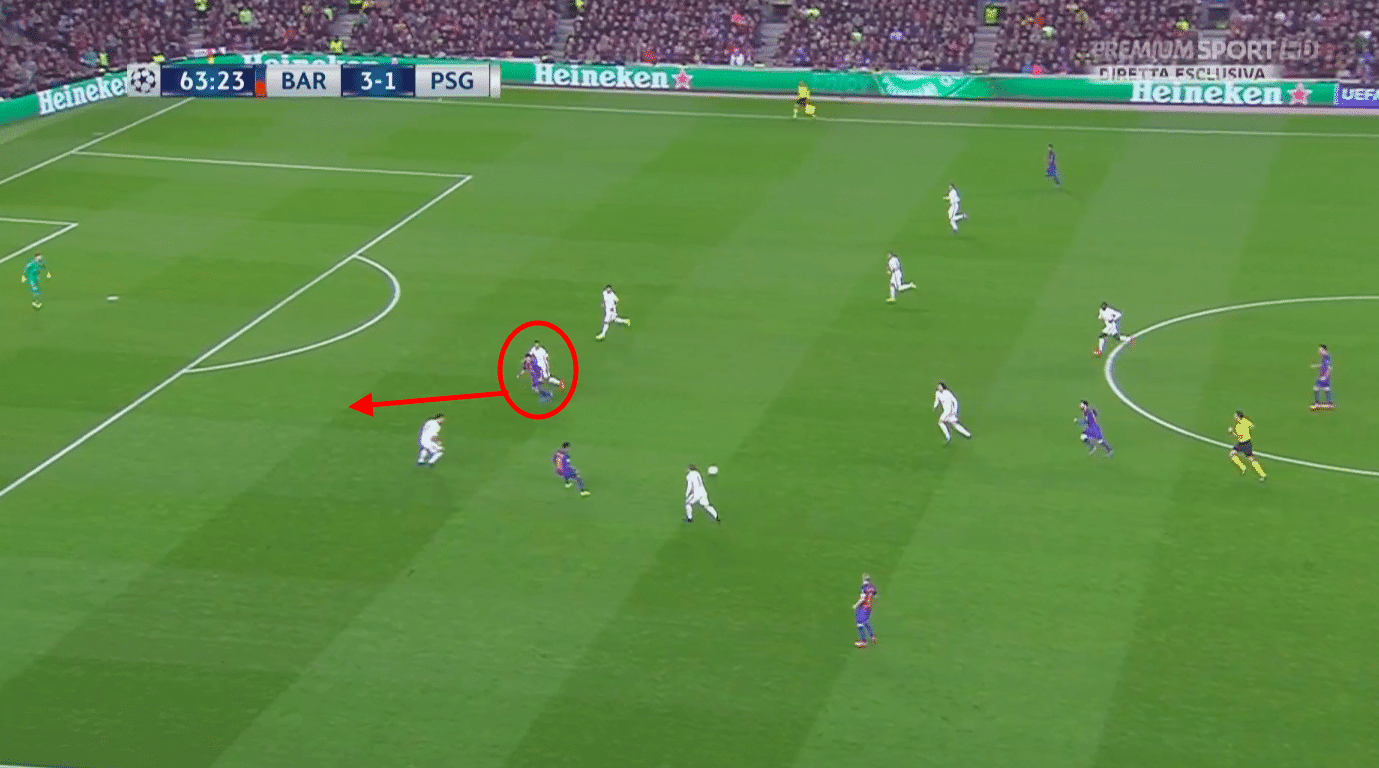 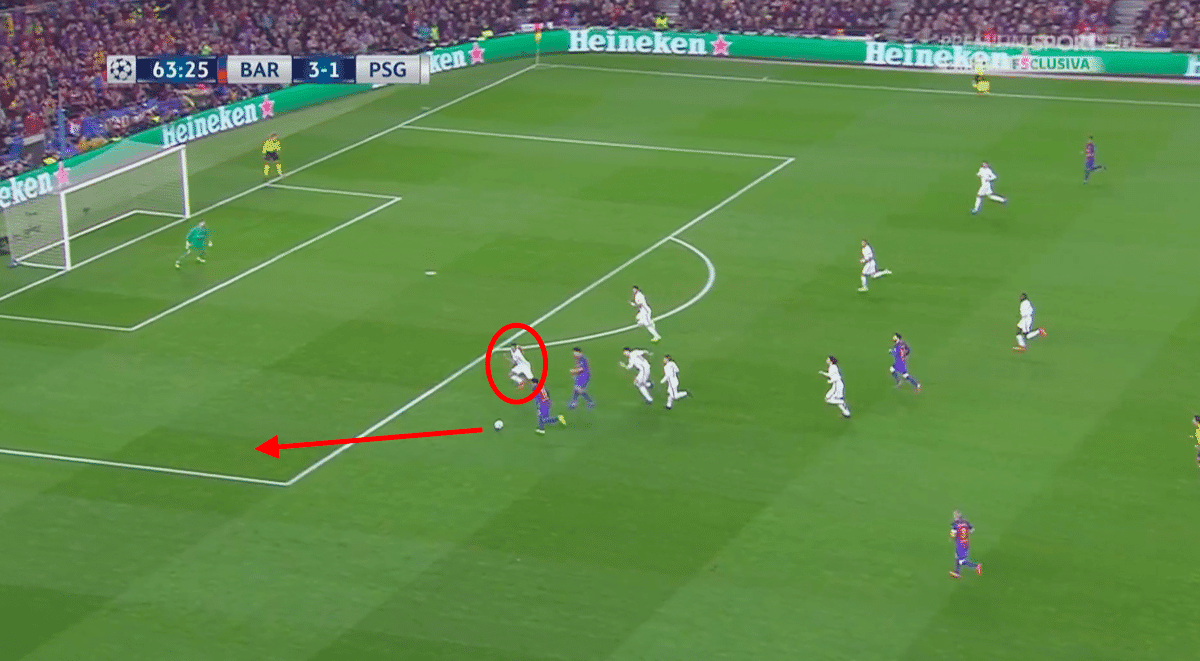 Thomas Meunier is supposed to be looking after Neymar, but the right-back is beaten too easily, the 22-year-old spots the danger and speeds into action, matching his compatriots run and betting a body between him and the goal. 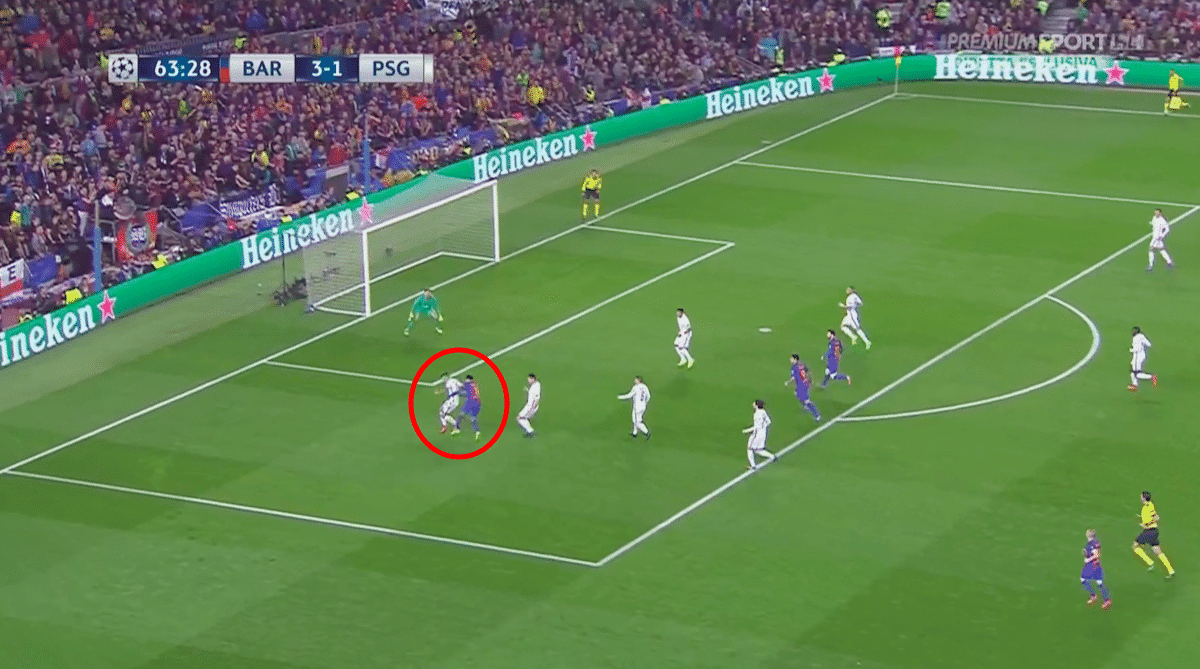 He is then able to stay big, not fall for Neymar’s tricks and power the talented Brazilian off the ball and win possession for the away side.

PSG may have devastatingly lost that game 6-1 and limped out of the Champions League to the Catalan club, but Marquinhos impressed as much as anyone can conceding six times.

He made five tackles, three interceptions, three clearances and led the team with three blocked shots.

How does Marquinhos compare to United’s defenders? 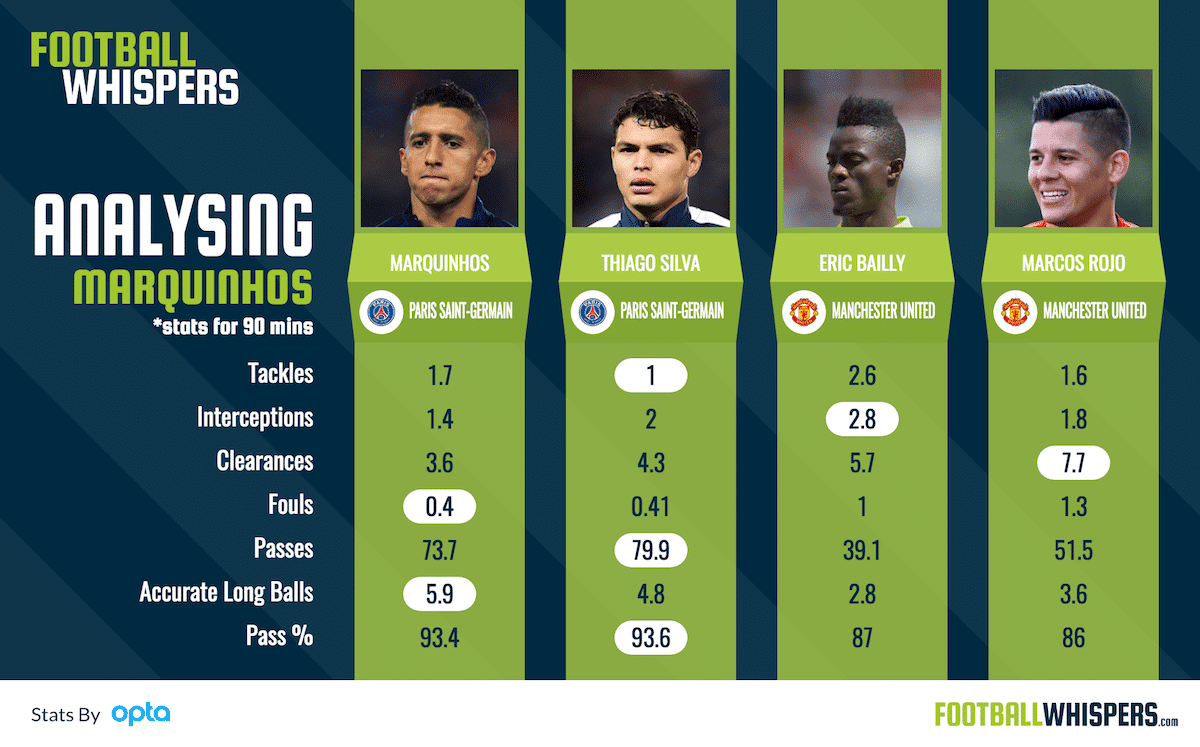 Making a lot of tackles is not always a good thing for centre-backs, you’d rather they intercept danger before it comes to going in for the ball. Or you want them in a position to get in front of the ball and clear a chance before the opposition get a look at goal.

Marquinhos makes around the same amount of tackles as Marcos Rojo, but significantly fewer that Eric Bailly. The Ivorian is always very eager to charge into those situations, something he has improved on, but still needs fine tuning.

In that sense, he makes more interceptions and clearances than Marquinhos, but he makes more than double the number of fouls as the Brazilian.

What the PSG man would bring is some calm and control on the ball and a great option to play long from the back. Marquinhos makes 73.7 passes per 90 minutes, completes around 93 per cent of all his attempts and hits 5.9 accurate long balls per 90.

That’s head and shoulders above anything the United players can manage. Much of that is down to styles, but despite his age, the Brazilian has learned how to keep possession, use the ball effectively and pick good long range passes. Something that Jose Mourinho could use at Old Trafford.

Thiago Silva may still pick up better numbers than his young protégée, but it’s Marquinhos who has the much higher ceiling and has the potential to become an even greater player.

If Manchester United can convince PSG to sell and Marquinhos wants to move, this is a deal they must get over the line.