Manchester United find themselves in something of a predicament this summer.

Transfer targets are seemingly overpriced, with the Red Devils reluctant to meet the demands for Aaron Wan-Bissaka and Harry Maguire, and key members of the squad are eyeing up moves away from Old Trafford.

Mauro Icardi goes in the opposite direction. The Argentina international had a 2018/19 season to forget and has no future at the club after falling out with the board. Prior to this, he was one of the most sought-after forwards in world football.

Real Madrid reportedly viewed the 26-year-old as a long-term replacement for Karim Benzema. Chelsea saw the former Barcelona attacker as their future No.9 and he was linked with a move to Serie A rivals Juventus with the Old Lady looking to assemble a squad capable of winning the Champions League.

His stock has dramatically fallen over the last 12 months and Nerazzurri find themselves in a difficult situation. If they can’t shift their star striker then incomings will be minimal and Lukaku won’t be calling San Siro home.

Swap deals are rare but this might be one to suit all parties. United have rightly moved away from throwing money at reputations as opposed to players they actually need but Icardi is the first for a while who falls into both categories.

He’s an elite finisher, a reliable game-changer and has a winner's mentality. If the Red Devils are to muscle their way into the top four next season then players with those traits will be required.

As good as Marcus Rashford is, Ole Gunnar Solskjær can’t rely on the 21-year-old to score 20 or more goals in the English top flight.

The real question is whether Icardi is an immediate upgrade on Lukaku. The much-maligned Belgian forward is still one of the most prolific forwards in the Premier League. He guarantees goals and he knows the United system.

What Solskjær has to consider is if it's better sticking with the devil he knows or gambling on a player best described as a wildcard. 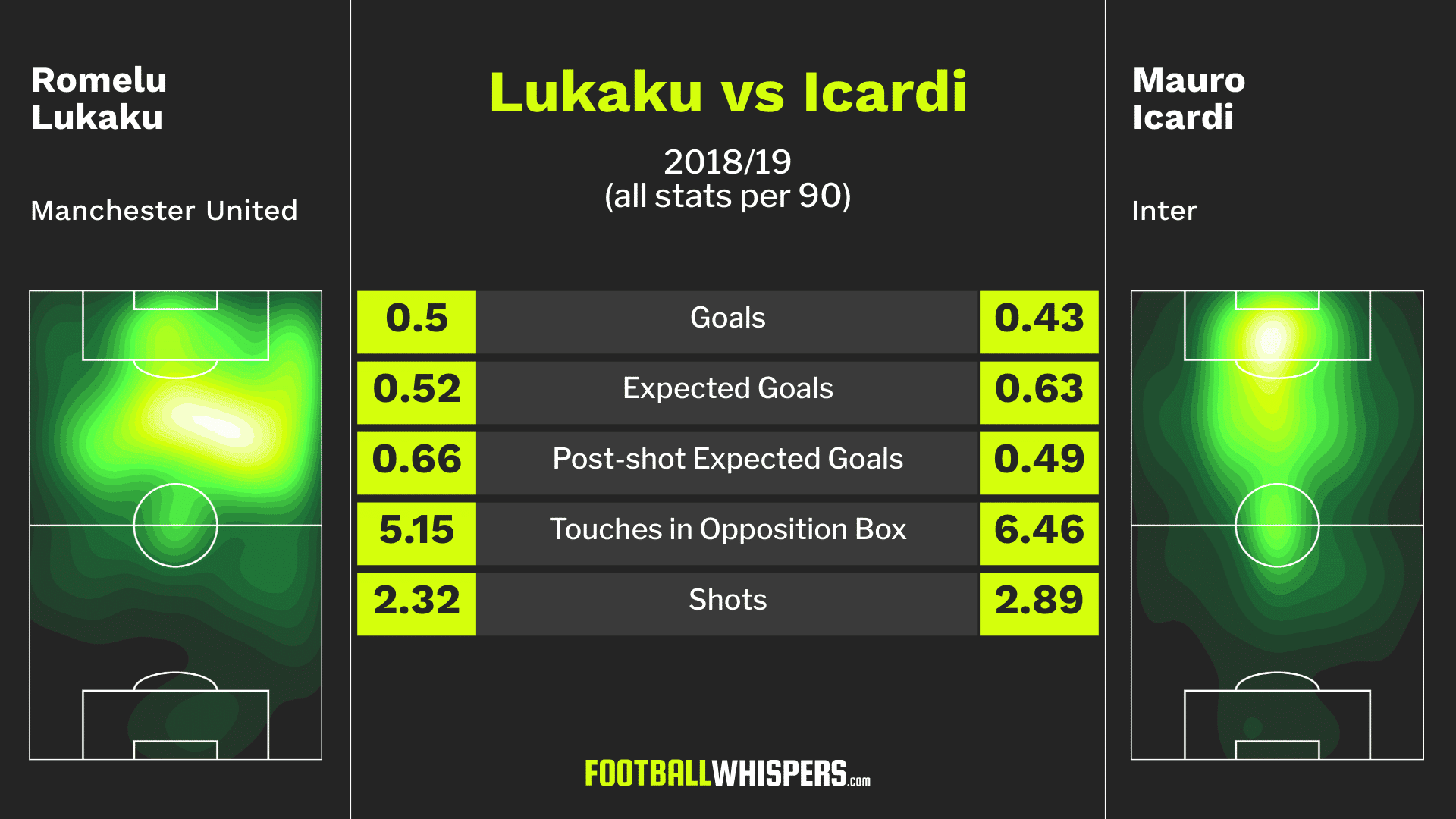 Going off one season isn't the best way to judge players but both had difficult 2018/19 campaigns, so, on paper at least, the comparison is fairer than it would be for most.

Icardi, as shown by the heat map, is more of a poacher. He does his best work in and around the penalty area where Lukaku was in wide areas at times as part of United's two-pronged strikeforce in certain games.

Yet despite doing more of the leg work, the Belgian actually had a better goals per 90 average last season. It isn't a good look for Icardi when the underlying numbers are investigated either.

The Inter hitman had a better expected goals average (0.63 to 0.52) but his post-shot numbers, which take into account where an effort lands on target, dramatically falls to 0.49. It suggests his shot placement leaves a lot to be desired and he's actually devaluing the opportunities he has.

If United want a reliable goalscorer then, based on the form shown during the 2018/19 campaign, Icardi isn't the man to back.

Lukaku has faults but he knows how to put the ball in the back of the net and right now that is what is important to the Red Devils.