Manchester United’s summer transfer window started off on a low but it could yet end on a high.

The Red Devils are reportedly pushing to complete a deal for Harry Maguire while respect Italian journalist Gianluca Di Marzio claims the Red Devils are one step away from signing Bruno Fernandes.

There’s also talk of Sergej Milinković-Savić making the move to Old Trafford to replace the wantaway Paul Pogba, but the World Cup winner is still a United player at the time of writing.

Head coach Ole Gunnar Solskjær has already added Aaron Wan-Bissaka to his ranks and the club have managed to keep hold of David de Gea.

If every one of the aforementioned players arrive this summer, the United boss has a job on his hands fitting them all in. It could well be a season of transition for the Red Devils but signs in pre-season suggest the one-time babyfaced assassin has a clear plan in place and it’s already being put to use.

On paper, a team containing Pogba, Fernandes, Dybala, Marcus Rashford and Anthony Martial or Daniel James is unbalanced. It’s something you’d see on Football Manager or FIFA, especially if deployed in a 4-3-3 shape.

However, if Solskjær adopted a 4-2-3-1, similar to the one used to great effect by France, United could do a lot of damage this season.

With Pogba and Scott McTominay as a double pivot in midfield, United have two players capable of covering ground as well as picking a pass. The latter isn’t in N'Golo Kanté’s league but the dynamic wouldn’t be too dissimilar to that of the middle third deployed by Didier Deschamps.

During France’s World Cup triumph, the former Chelsea midfielder resisted the urge to play Ousmane Dembélé out wide and instead opted for Blaise Matuidi on the left with Kylian Mbappé on the right. Antoine Griezmann drifted between the role as a support striker while playing as a second centre-forward alongside Olivier Giroud.

United could copy that with one speedster out wide in Martial or James with Fernandes occupying the other flank. The Portuguese star isn’t as defensive as Matuidi but his pressing instincts mean he’s more diligent off the ball than most wide forwards.

In turn, it means the midfield two don’t have as much ground to cover horizontally or vertically due to one of the wide players putting in a shift and dropping back when necessary. 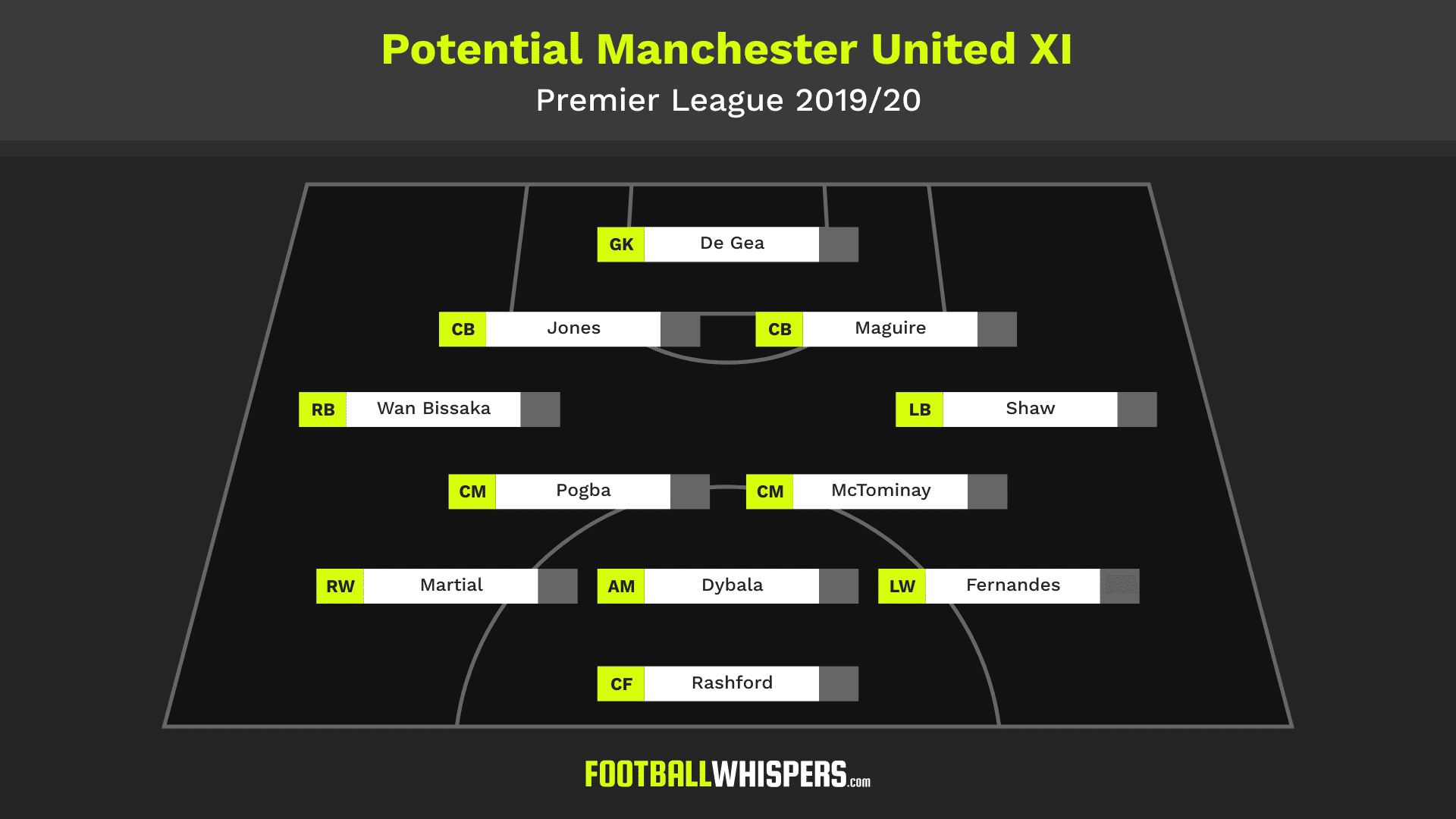 Dybala could take on the Griezmann role, flitting between the attacking midfield position and partnering Rashford in the attack. The United No.10 isn't identical to Giroud but both make space of others in their own way.

The similarities between the two teams don't end there. France used centre-back Benjamin Pavard at right-back, giving them a more solid defence on that flank as opposed to the more attack-minded full-backs used by teams these days.

Wan-Bissaka is defensively switched on and shores up that side of the defence for the Red Devils with Martial the man ahead of him. On the left, Luke Shaw could be a little more attacking knowing he has support from Fernandes.

This system doesn't hinge on Pogba but it might help him reach the level he does for France. However, if he does still push for a move then Milinković-Savić could fit into this shape without there being many teething problems.

Furthermore, Solskjær could switch to 4-4-2 if he wanted a bit more solidity and there's even a possibility of a diamond being deployed – similar to the one used by the United tactician last term.

When analysed properly, the links to these players make a lot more sense. United aren't simply playing FIFA and hoping for the best. To their credit, they appear to know what they want and they're doing their best to piece together a team capable of executing what Solskjær wants and needs.