As Premier League teams look to either make the step up, or keep ground with the bigger clubs, so much emphasis is made over the stadium.

Manchester City spent hundreds of millions of pounds on the City Football Academy, Chelsea unveiled plans for their new 60,000 stadium this month and Tottenham Hotspur move to their new ground  in 2018, however, when analysing the new Football Money League report by Deloitte, you instantly see that bums on seats is not how the biggest clubs make a profit.

Manchester United, for the first time since the 2003/04 report, have regained the top spot from Barcelona and Real Madrid. In the 20 years that the financial organisation has produced the report, this is the first time that any club has broken the €600million mark, with each of the top three clubs achieving that feat during the 2015/16 season.

Deloitte focus on each clubs’ ability to generate revenue from matchday, broadcast rights and commercial sources, and rank them on that basis.

For the third year running, the Premier League had eight teams in the Top 20 and 12 in the Top 30. Italy are the closest country with four.

Manchester United made £515.3million, that’s more than Barcelona in second with £463.8million and Real Madrid’s £463.8million. The Catalan club finished second by a difference of €100,000.

Financially, Manchester City are United’s closest English rival, making £392.6million in 2016. Despite the new facilities and the extension onto the Etihad Stadium, just 13% of their revenue is generated on a matchday (£52.5m), compare that to the £102.8m generated across the city at Old Trafford and it’s worlds apart. 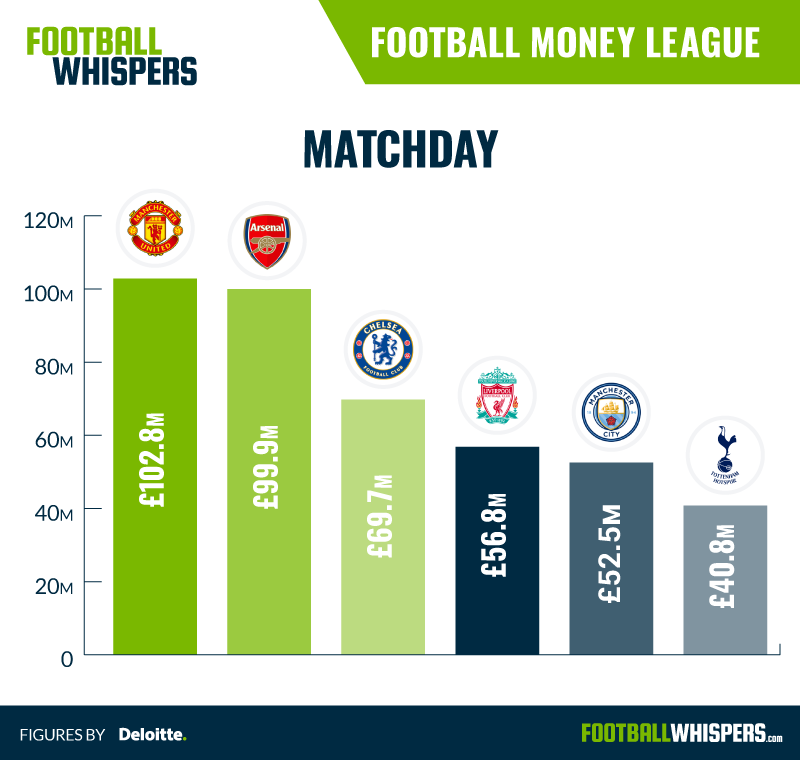 What is staggering, although they make double per game compared to City, that is only 20% of their overall intake. Arsenal, Chelsea and Liverpool all make more than the blue half of Manchester in this regard. However, at the Emirates it’s 29% of what they make, 21% at Stamford Bridge and 19% at Anfield. 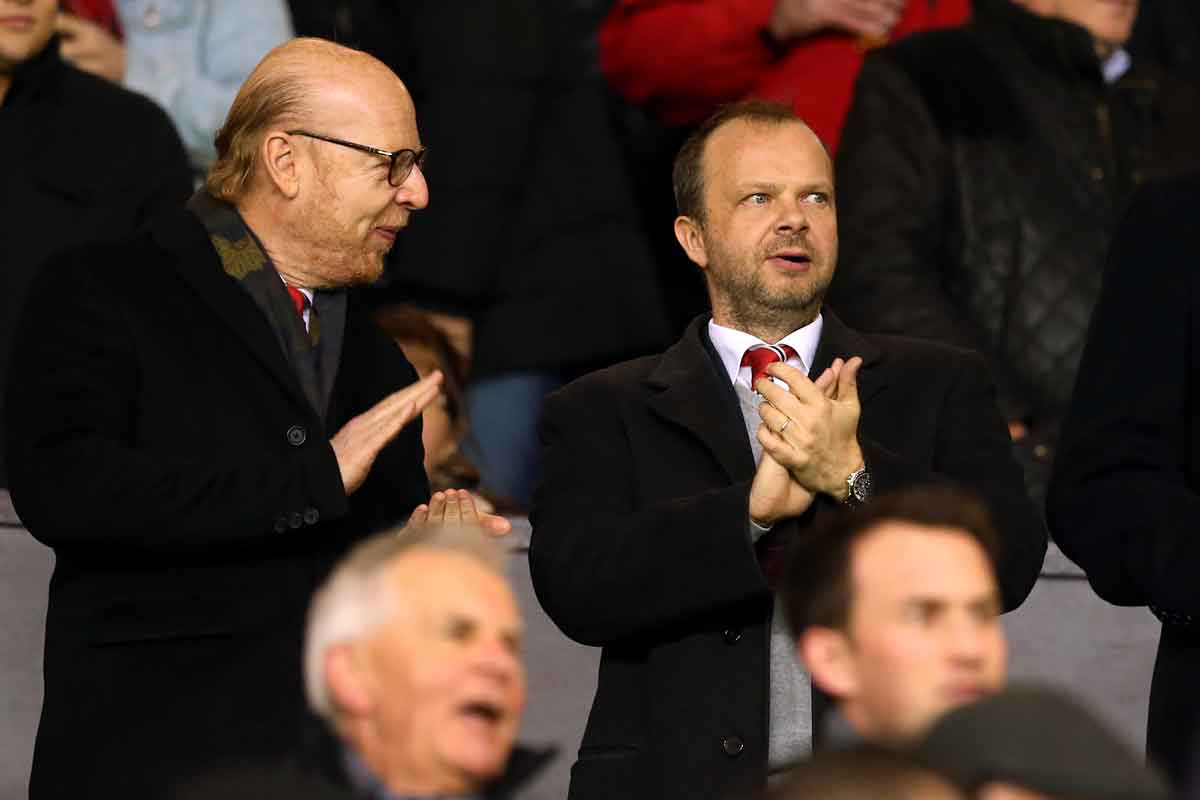 The latter two will increase that somewhat with the increase capacity. Arsenal’s won’t increase by much in the future, not in a way that could see them overtake United.

It’s no secret that the Premier League clubs have a wonderful television deal and that shows in the parity of the Broadcast revenue. United made £140.4m, City £161.4m, Arsenal at £143.6m, Chelsea £142.9m, Liverpool £125.7m and Spurs £110.4m. Showing that even without a place in the Champions League, you can still benefit from TV deals – what’s £30m between friends. 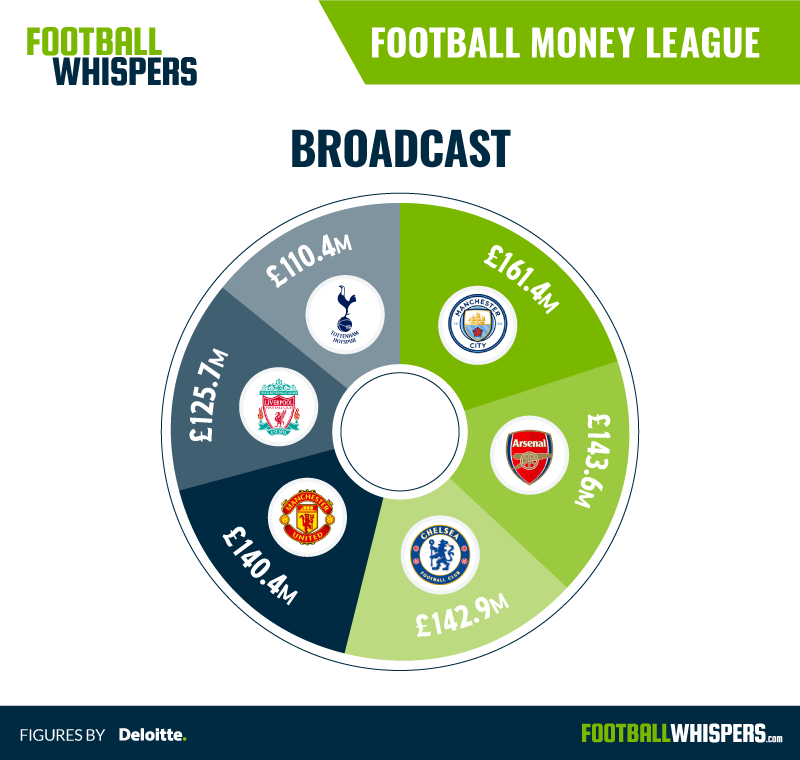 Manchester United failed to reach the UEFA Champions League for this season, but despite that, they are expected to generate around £530million in the next report.

Regardless of where they finish in the table, no one else in England will come close, and that is because of the work United do on the commercial front. It dwarfs everything and everyone.

A whopping 53% of what they made last year came from the commercial side of the business. That includes sponsorship, merchandising, stadium tours and any other commercial operations.

In terms of percentage, only Bayern Munich and Paris Saint-Germain can beat that from clubs in the top 10, but in monetary value, although over £200m, it’s still behind the English giants.

Amazingly, Zenit Saint-Petersburg, 17th on the list, make 74% of their revenue from the commercial side. They only make £7.7million from the matchday side. 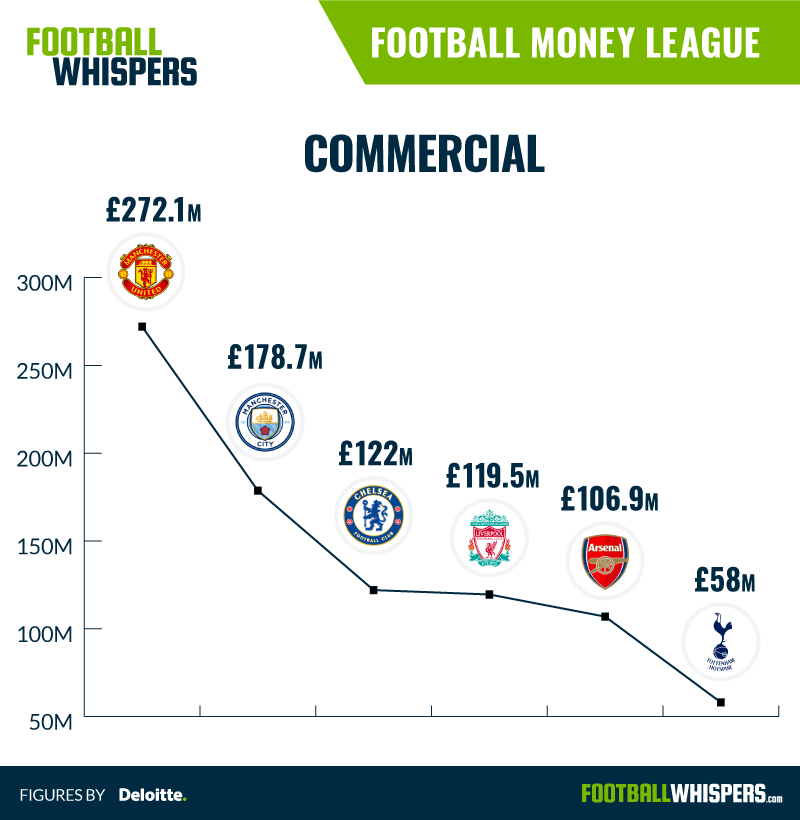 No one else in England comes close, with Spurs making around a fifth of what United manage in this area. Manchester City are second with £178.7million, just £93.4million behind. That buys you Paul Pogba with some change left to take him out for dinner.

Paul Pogba was a Bargain

The game has changed so much and how Man United market themselves has developed to such an extent that the £155,000 they spent on Denis Law in 1962 was more of a financial risk at the time then the £89million they spent on Pogba. 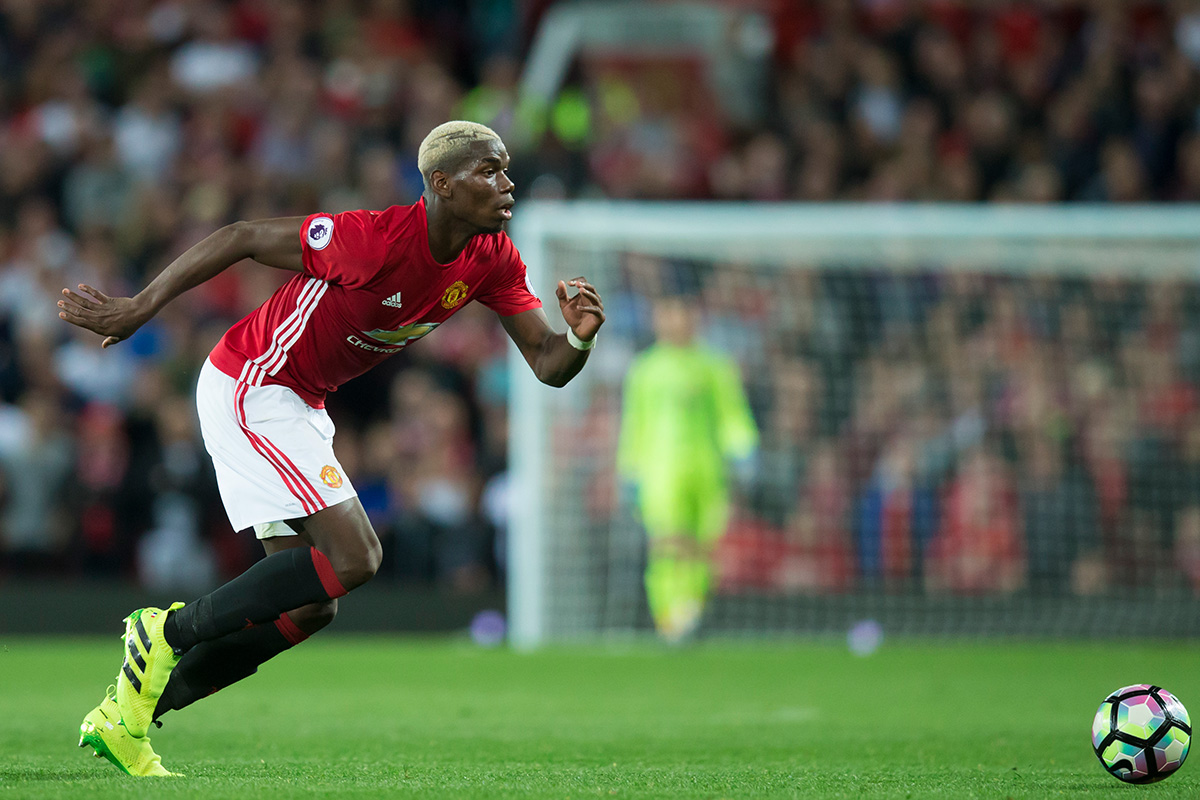 That was over 60% of the club’s revenue, the deal for the Frenchman was only 17.2% of the money they made last year. That’s exactly the same percentage as when they agreed a £27million move for Wayne Rooney with Everton in 2004.

United’s £75million deal with Adidas is a huge factor, much more than they made with Nike, but it’s how the club have split up the branches of the global brand and sold it off that is extremely impressive.

On Manchester United’s website, there are 30 different partners listed, that doesn’t even include Nissin, the club’s official instant noodle partner.

“The worldwide demand for its instant noodles is over 105 billion servings per year and Nissin has a long tradition of innovation, challenging the industry with their products and setting a standard that has been emulated the world-over,” United’s group managing director, Richard Arnold said when the deal was announced in 2014.

“Nissin also has a proven record of supporting leading sports organisations, making them a fitting global partner for Manchester United. We look forward to working together.”

Although no numbers were mentioned, it is believed they make more from that deal than some Premier League clubs make from their own shirt sponsorship.

Outside of their global partners, they have split everything down and separated everything by territory and region. You have Chivita, the official soft drinks partner for Nigeria, BIDV, the official financial services affinity partner for Vietnam. Add to that Serbia, UAE, Turkey and Qatar and you quickly get the picture. 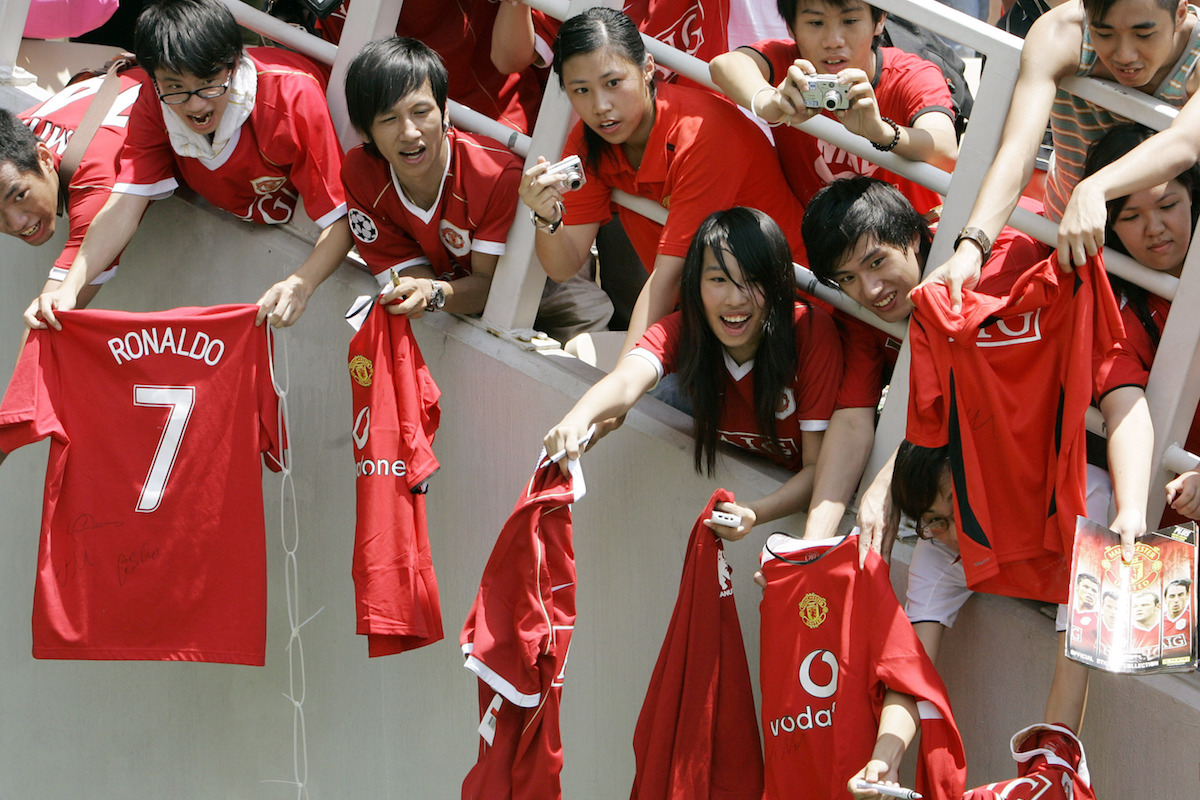 Some fans may see it as selling out, but with every new partner comes a new avenue to build a fan base and increase the success both on and off the pitch.

The Premier League’s TV deal will keep things fairly level on that front. Soon all the clubs will have state of the art stadium and facilities, the difference maker is going to be in the commercial world.

What the clubs has built dwarfs every team in this respect, they may be able to close the gaps on the pitch, but for now, the undisputed winners of the commercial Premier League is Manchester United. It’s not even close.