It's something of an open secret that Manchester United want to sign a striker when the transfer window reopens in January. And for several weeks the identity of that striker was known. Or so we thought.

The Premier League giants have been constantly linked with a move for Juventus forward Mario Mandžukić. The Croatian is available and supposedly turned down a lucrative offer from Qatar last month as his preference was to head to Old Trafford in the winter.

If that is correct, then ESPN's Mark Ogden has thrown something of a curveball into the mix. An Edin Džeko-shaped curveball to be precise. According to the reporter, United have moved the former Manchester City forward to the top of their wishlist.

The primary reason for that is because Mandžukić has not played a single minute of football for Juve this season. United are concerned the 33-year-old would need time to get back up to full fitness and then time to adapt to the English game. The adjustment period is simply too long.

Džeko, meanwhile, has played 15 times for Roma this term and scored six goals. He also has four-and-a-half years experience of in the Premier League. He could, theoretically, hit the ground running.

That's what United need from their January recruit because the club left themselves short in attack in the summer.

The decision to let , Anthony Martial and Mason Greenwood as his options up top.

None of the trio would be classed as traditional No.9s, either. Rashford and Martial have spent the majority of their careers on the left flank rather than at the point of an attack. And Greenwood, still only 18 years old, has often been used on the right in the senior side.

So there is a clear space for Mandžukić or Džeko to fill. The question is which of the duo – both of whom are in their 30s – United should pursue come January.

Given Mandžukić hasn't played for Juventus this season, we've opted to look back at the numbers he posted last term and compare them to Džeko's.

There is something of a caveat here, however. The Croatian was predominantly deployed from the left flank, as the heat maps below highlight, during the 2018/19 campaign. That must be taken into account. 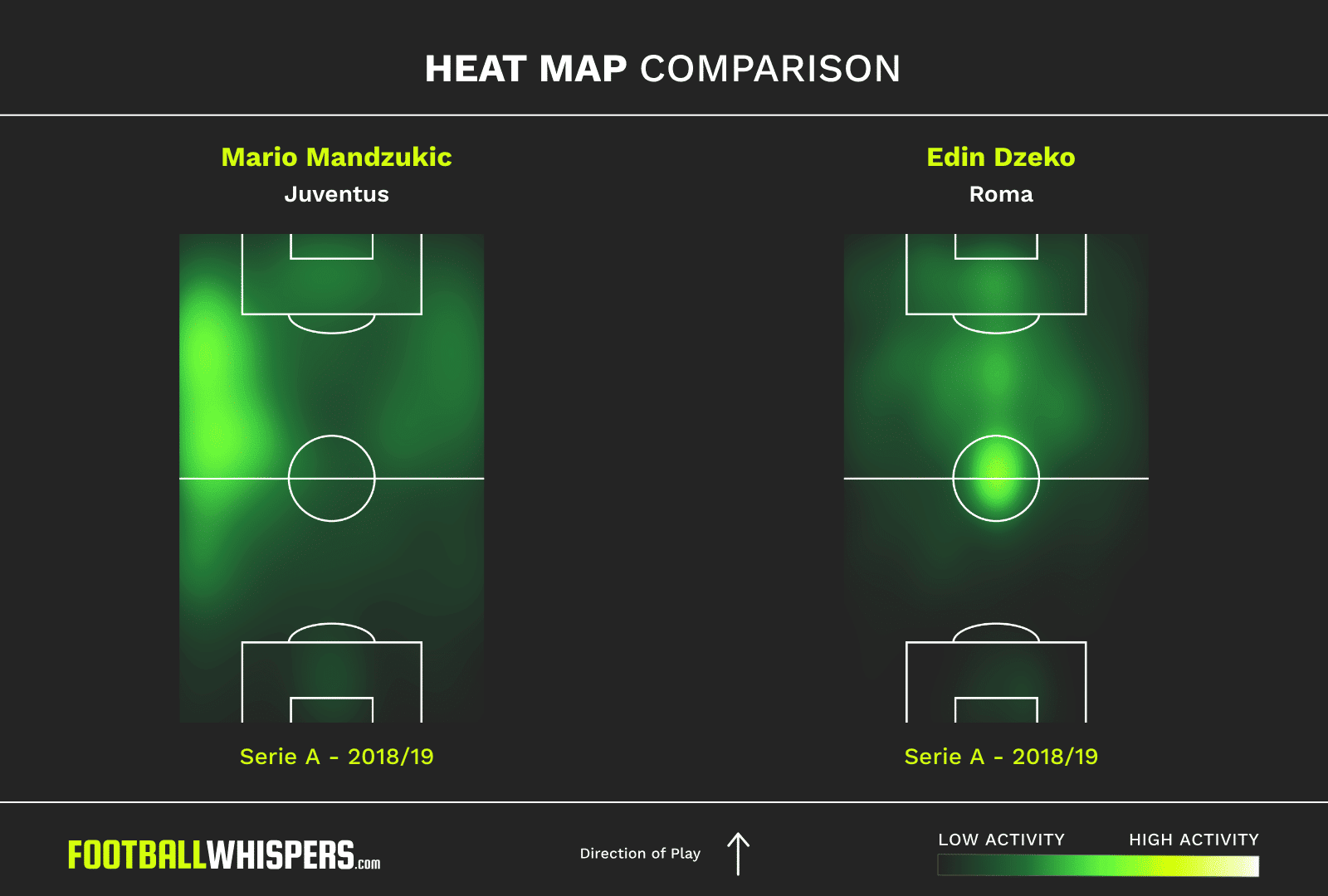 What is clear is Mandžukić is far more versatile than Džeko. He was often used as a wide target man by Massimiliano Allegri during his tenure which created space infield for the likes of Gonzalo Higuaín, Paulo Dybala and then Cristiano Ronaldo to exploit.

Mandžukić didn't often beat opponents – he completed just 0.22 dribbles per 90 – but he could dominate smaller full-backs or create an overload when he moved inside. His aerial prowess remained, though, and he won 3.25 aerial duels per 90, the 23rd-most among Serie A attackers.

It's also interesting to note that despite not being an out-and-out striker like Džeko, the Croatia star did average more goals per 90 last season. Although the fact he played for a dominant Juventus side should be remembered. 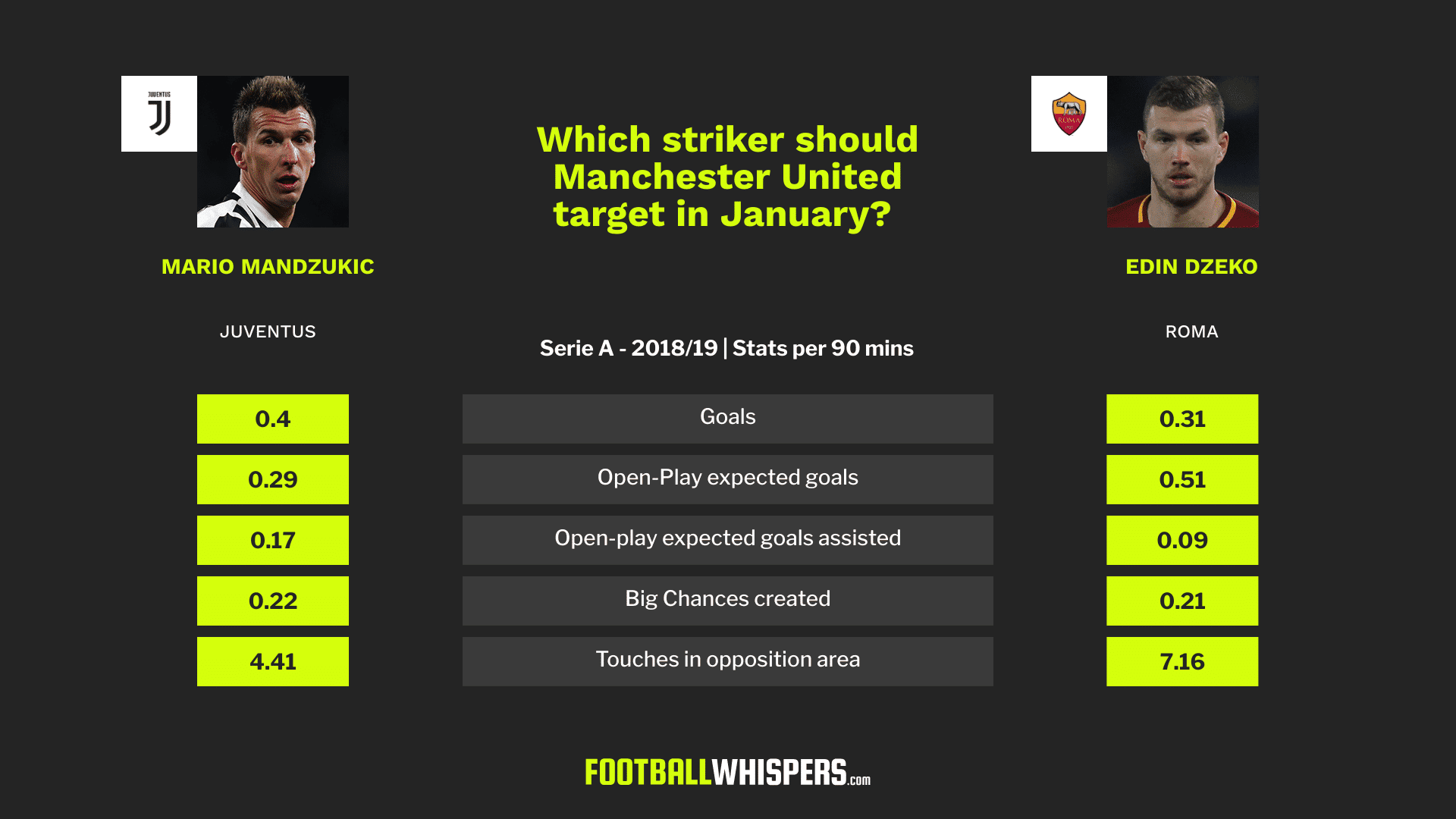 It's unlikely Solskjær would use Mandžukić out wide. He, after all, has Rashford and Martial for that role if required. But it's a testament to the forward's mobility, work-rate and defensive diligence that he can fill in if required.

Džeko is far more one-dimensional. He is a striker and nothing else, which isn't necessarily a bad thing. Since leaving City for Roma, initially on loan, in 2015 the Bosnia international has struck 93 goals in 194 games. He hasn't failed to hit double figures in a campaign during his time in Serie A.

His output did drop last season, however. Džeko struck just nine times in the Italian top flight as Roma finished a disappointing sixth. Yet the striker's underlying numbers indicate he endured an unfortunate campaign.

Yet his goals per 90 stood at 0.31, a figure bettered by 39 other attackers in the Italian top flight, including Mandžukić. Džeko, it seems, continued to come up against goalkeepers in inspired form.

This season his goals per 90 has jumped back up to 0.43 and that is in line with his open-play expected goals of 0.44 per 90. The football gods are back on the Bosnian's side.

And it's this form which should convince the Red Devils to move for Džeko rather than Mandžukić in January. Yes, he has a history with Manchester City, United's so-called Noisy Neighbours, but he is also a consistent chance getter and a reliable finisher.

The fact he knows the Premier League is also a huge plus point. As is his match fitness. He will require no adjustment period.

The supposed fee Roma will demand is £13million, a not-insignificant fee for a 33-year-old with no resale value. But Džeko is exactly what United need: a sure-fire alternative to Rashford, Martial and Greenwood.