Manchester United seem desperate to land a centre-back by the time the transfer window closes, and three targets have cropped up in recent days.

Toby Alderweireld of Tottenham Hotspur, Leicester City's Harry Maguire and, most recently, Kurt Zouma of Chelsea have all been linked, but which player would be the best fit?

The club have signed a centre-back in the last two summer transfer windows, but are apparently yet to get one of these signings right.

Eric Bailly arrived in 2016 for £30million, and was José Mourinho’s first signing. The club went for another centre-back in the shape of Victor Lindelöf in 2017, again paying just over £30 million. They now find themselves in the position where they are shopping for a central defender again.

Twenty-five-year-old Englishman Maguire ticks a few boxes in that he can play on the left side of the defensive duo, and also counts as a homegrown player, but this will also affect his fee as the ‘English premium’ will be applied.

Rumoured fees have been as high as £75million, and though the final price paid would probably be lower, it’s still a lot of money for a player untested at the top level of club football. Leicester’s interest in Turkish centre back Çağlar Söyüncü has given United hope that they will eventually sell Maguire.

At 23 years old, Zouma is younger and slightly more versatile in that he could also cover at right-back if needed. He spent last season on loan at Stoke City, who were relegated, so moving to a side challenging at the top of the table would be a step up.

He might be available on loan, so would be less of a gamble, but it’s questionable as to whether he would do a better job than those already on the books at Old Trafford.

Perhaps the best option of the bunch of central defenders United have been linked with would be Alderweireld.

Though he’s 29 years old, he is in the last year of his contract at Tottenham which could help lower the fee. He is without doubt the best of the players the club have been linked with, and should he stay fit he would walk straight into the United starting XI.

The Belgian has been one of the best centre-backs in the league during his time at Southampton and then Spurs, and is tried and tested. Spurs may be willing to let him go as they have able cover in the shape of Davinson Sánchez, Jan Vertonghen and Juan Foyth, with Eric Dier also able to play in defence. 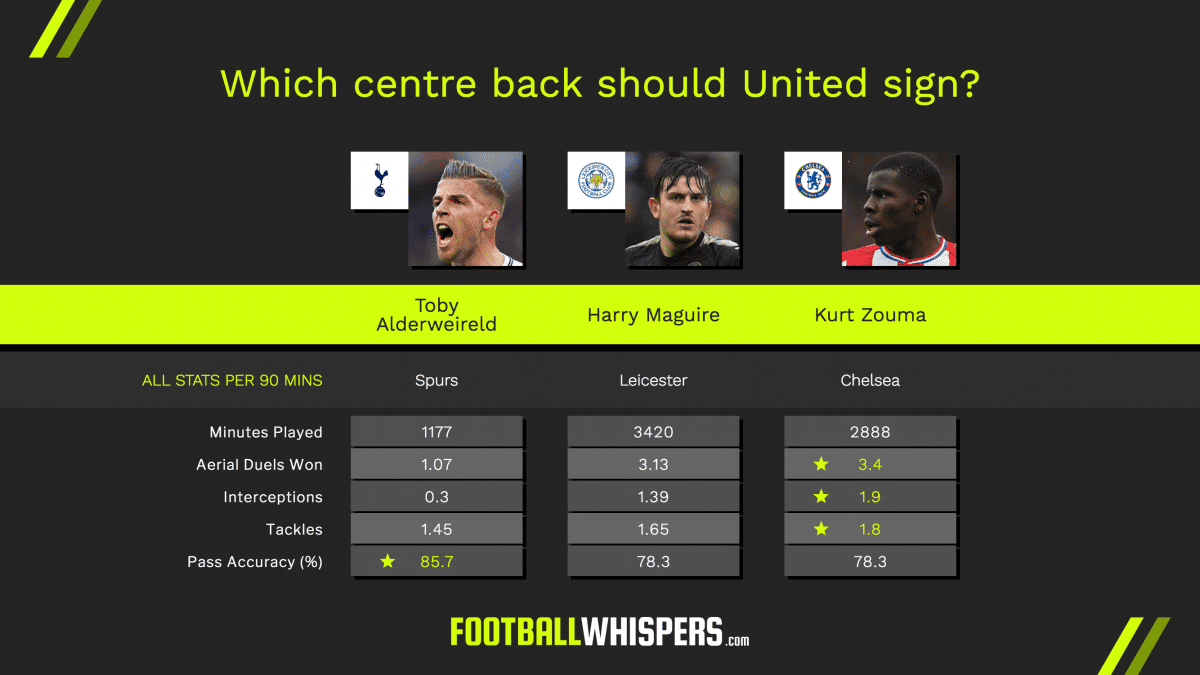 The graphic above shows favourably for Zouma, but it needs to be taken in the context that Stoke will have had much more defending to do than Leicester and Spurs, with more duels and battles there to be won.

Alderweireld's passing stands out, though United aren't necessarily a ball playing side in the mould of other top six sides such as Spurs, Manchester City, and Liverpool. Therefore, a centre back accustomed to winning battles such as Maguire or Zouma may suit them.

Mourinho is clearly not happy with his club's work in the transfer window this summer, but if they can finally get the right man to slot into the centre of defence it may ease the worries going into the new season.