Manchester United have conquered two of Europe's greatest clubs in their own backyards this season.

While that counts for something, the reality is that since their unlikely triumph over Paris Saint-Germain, United have been a shadow of the all-smiles, vibrant attacking side that characterised Ole Gunnar Solskjær's first two months at the helm.

Gone are the questions about the Norwegian's Midas touch; replaced by more probing inquiries into United's regression towards something more closely resembling the regime of his maligned predecessor.

United's performance against Barcelona at Old Trafford was overstated, not least by BT Sport's commentary team.

The truth was that despite a curiously lethargic Barcelona, Solskjær's side lacked the clinical edge to truly make life difficult for the Blaugrana's defence.

Heading to the Camp Nou, the odds are stacked against them. They'll need to do more than merely watch the clip of Solskjær's Treble-clinching goal. Here are a few lessons they must have learned from the first leg.

If United wish to go down the bombarding-Barça's-box-with-crosses route again, greater accuracy is required if they're to profit.

They attempted 19 crosses at Old Trafford, only one of which reached its intended target.

Although there was a certain irony that Marcus Rashford, one of the players who should have been on the receiving end, was supplying the delivery while Diogo Dalot, who you would have expected as the crosser, was there making a hash of the chance.

The opprobrium around Ashley Young's performance was a little much, especially given that the 33-year-old has been one of United's steadiest performers throughout this trying post-Fergie era.

At the same time, Young, who can cross a ball, let himself down with poor service towards Romelu Lukaku. The veteran is more suited to the left, where he can cut back and launch one of his in-swingers. Dalot needs to be on the right, where he can drop the shoulder and drive past his man before delivering. 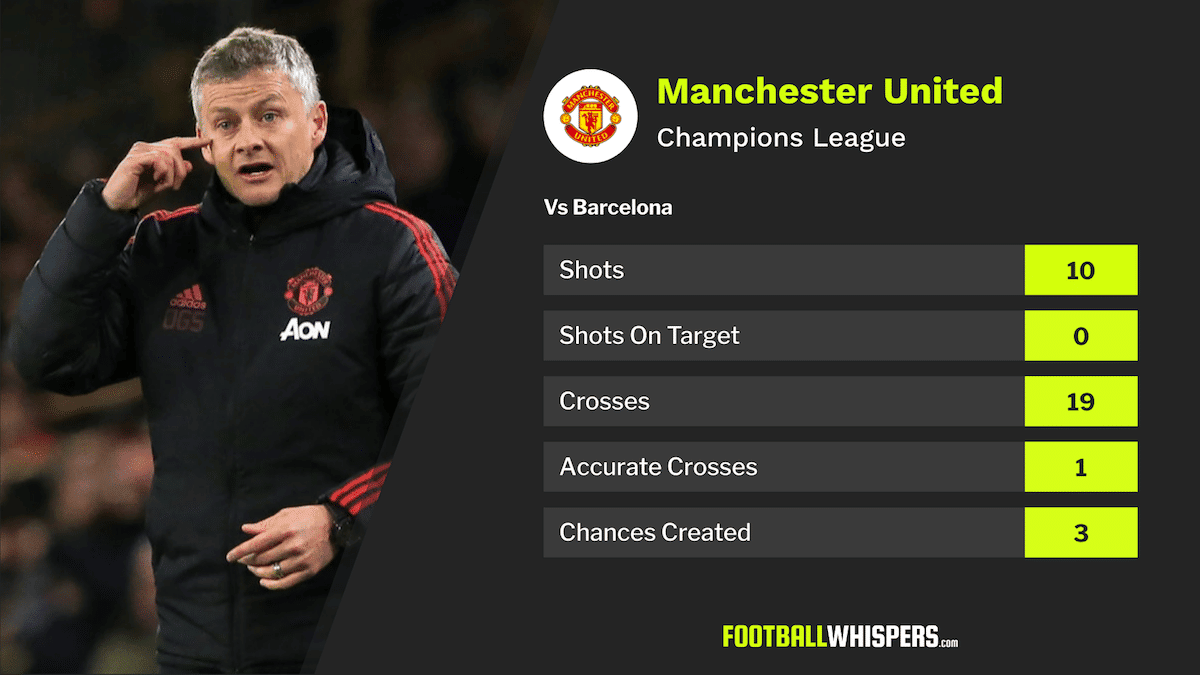 Scott McTominay couldn't buy a game earlier in the campaign. Now, he's being hailed as United's next big thing in midfield.

In truth, the fresh-faced Scot does look to have found a new gear in recent weeks. He battled valiantly to topple PSG, scored his first goal in the defeat to Wolves and was his side's best player against Barça.

The most telling barometer of his confidence came when the 22-year-old turned a rampaging Arturo Vidal on the edge of his penalty area before launching a counter.

People have loved to talk about Solskjaer's impact on Rashford and Paul Pogba (both of whom have struggled lately) but the former striker is getting the best out of McTominay, so much so that he's been elevated to ‘given a rest before the big game' status, having been kept on the bench for Saturday's 2-1 win over West Ham.

Aggressive, assured and surprisingly inventive, the youngster may be key to breaking down Barça's rearguard. 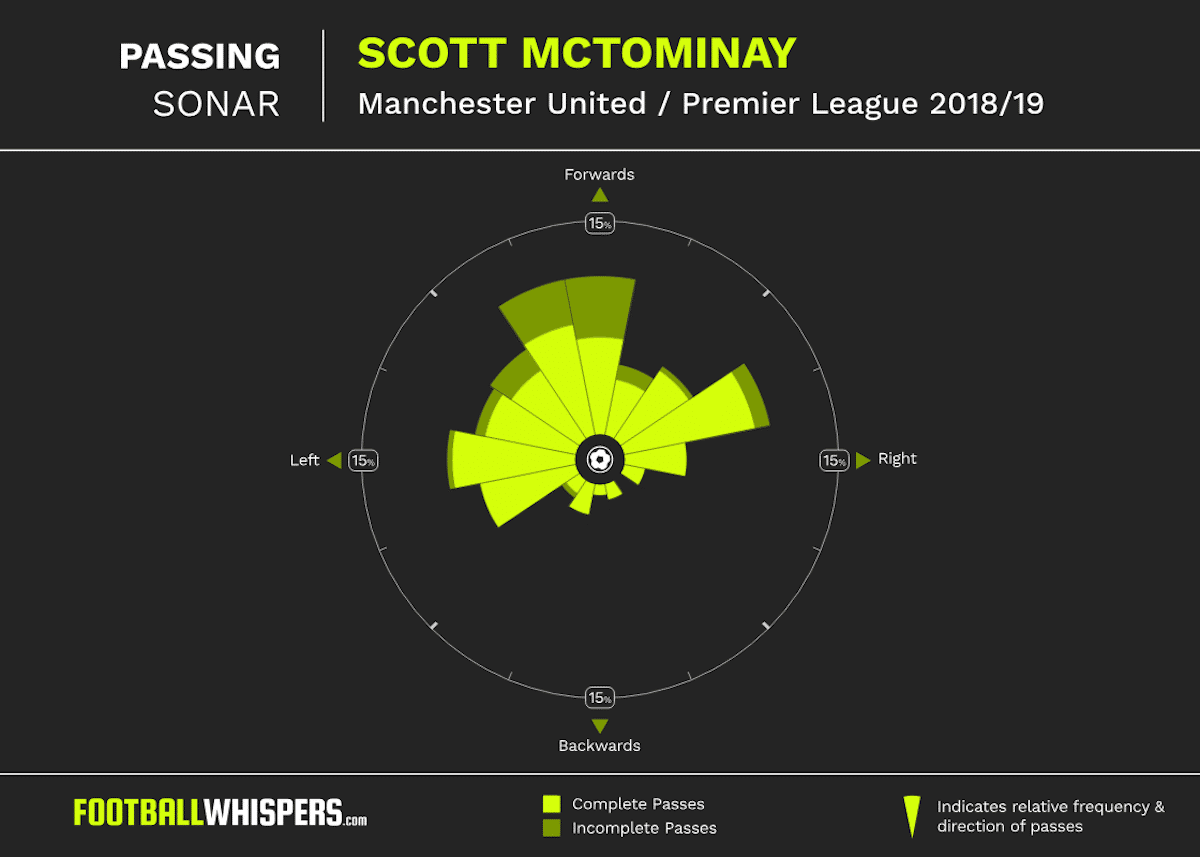 United were toothless last week, failing to register a shot on target in a home European game for the first time since March 2005.

Of course, it's been the story of United's Champions League campaign: Marouane Fellaini remains the only home player to have scored at Old Trafford.

Sadly, that didn't look like changing last week. Rashford had a couple of wayward efforts while Fred, the mystifying £50million import from Shakhtar Donetsk who has one goal this season, didn't have much luck either.

United have been more adventurous on the road, however, at least when it comes to accurate shots, managing 19 from their four away games so far.

In Paris, Solskjær's men seized whatever chances fell their way. Lukaku was gifted a second-minute goal thanks to Thilo Kehrer before pouncing on Gianluigi Buffon's mishandling of Rashford's shot to grab his second.

Barça offered United hope in the first leg. Uncharacteristically sloppy on the ball, opportunities may come their way in the Camp Nou. Banking on that is perilous, however; they must show a cutting edge in attack.

Speaking of uncharacteristically sloppy, Busquets failed to live up to his reputation as football's most enduring metronome. At times, particularly during the first half at Old Trafford, the No.5 looked strangely off the pace, immobile and susceptible to United's press.

Indeed, those packed into the Stretford End were incensed that he stayed on the pitch as long as half-time after receiving one yellow card despite making three bookable offences.

The 30-year-old should be refreshed for Tuesday after having been left out of the squad for Saturday's trip to Huesca but Solskjær will have been encouraged by how his players unnerved a player of his vast experience.

The likelihood is that Busquets will be more assertive at the Camp Nou, but United have the players – McTominay and Fred, mainly – to give the veteran a few headaches.

Hope and pray for an off-form Messi

Let's be honest; that's pretty much all United can do. They need a huge slice of luck to make it to the semi-final and perhaps Lionel Messi having a quiet night would be the most fortuitous development of all.

When the Argentine gets it going on his own patch, he tends to produce something spectacular.

It would be unwise to put much stock into his supposed quarter-final hex (he has failed to score in his last 11 appearances at this stage). Messi has scored in all but one of his appearances at home in 2019. The only team to stop him was Real Madrid… but he was only on the pitch for 27 minutes.