Manchester United And THAT Comeback Of 1999

On May 26th 1999 two injury time goals from substitutes Teddy Sherringham and Ole Gunnar Solksjaer didn’t just provide the greatest ever finish to a European Cup final, it also ensured Manchester United would be crowned kings of Europe 31 years after the late Sir Matt Busby had landed the club's first European trophy and on what would have been the great man’s 90th birthday.

With Premier League and FA Cup glory already in the bag the win also completed a treble which had never before been achieved by an English football club and only ever previously by Celtic, Ajax and PSV; but due to the dramatic circumstances it will forever be remembered as one of the greatest comebacks of all time.

Manchester United of 1998/99 weren't as dominant as Heynckes’s Bayern, nor were they nearly as good as Guardiola’s Barcelona but they had something about them, a never-say-die spirit in a season that contained epic moments and fairytale storylines at every turn.

They’d won the title on the final day of the season after coming from behind to beat Tottenham and had overcome Arsenal in an FA Cup semi-final that they had no right to win after conceding a last minute penalty that was dramatically saved by Peter Schmeichel; but this against-all-odds, not-over-until-it’s-over approach would be just as effective as “ticka-taka” or “total football” for the men from Old Trafford.

Both United and Bayern's run to the Champions League final that year contained drama in virtually every game. They both came from the same group, which also contained Barcelona and Danish side Brondby with United scoring and conceding almost at will. Two thrilling 3-3 draws with Barcelona, two more draws against Bayern and two thrashings of Brondby were enough to see them through in second place, one point behind Bayern.

Bayern had their best side since the glory days of the 1970s and easily brushed past Kaiserslautern in the quarter-finals before beating Dynamo Kiev 4-3 on aggregate in the semis, while in Turin Roy Keane, having been booked and watching United implode inside 15 minutes against Juventus, single-handedly inspired a 3-2 comeback to send them to the final at the Nou Camp.

With Bayern already crowned champions and playing in the German Cup final the following week they were also going for a treble, making this a clash of heavyweight proportions which appeared to have no underdog and no obvious favourite. It was Goliath against Goliath and something had to give. 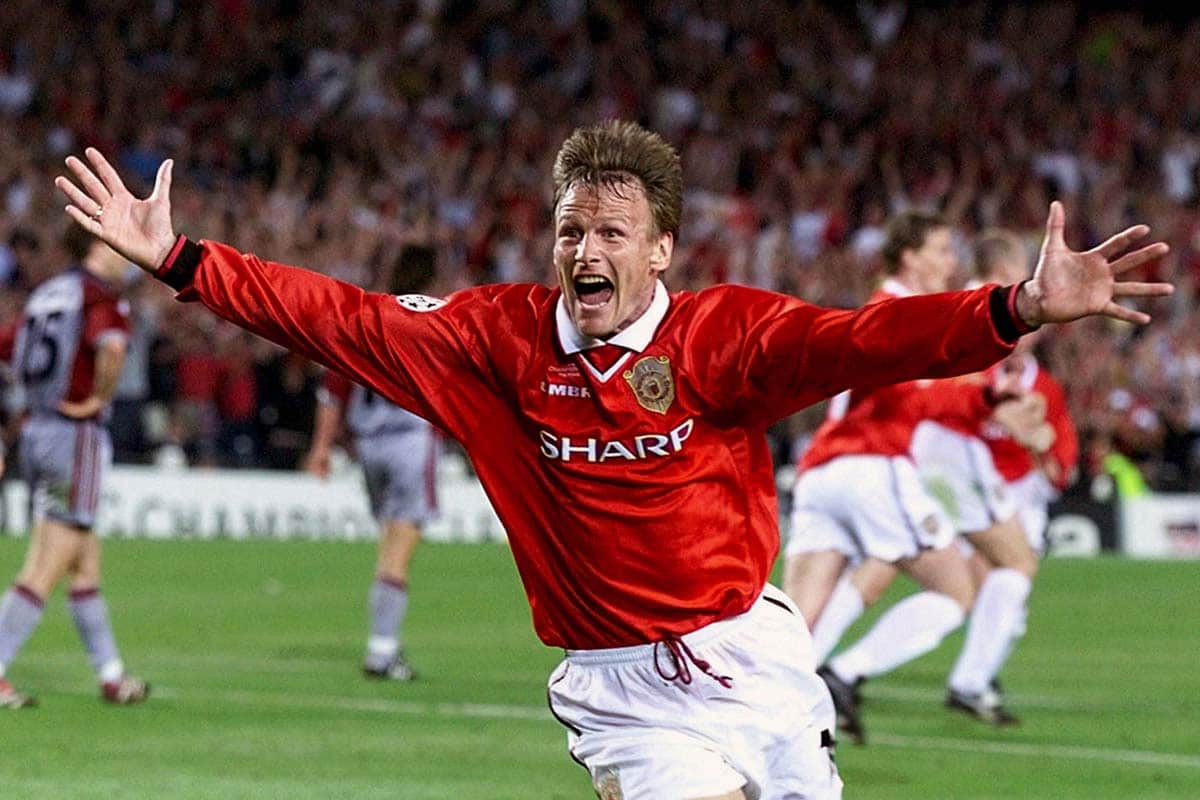 While United’s line-up consisted of internationals from all over the planet, Bayern’s side was very much the backbone of the German national side with Sammy Kuffour being the only foreign import in the side. The matchup also pitted two of the best goalkeepers in the game against each other and with two of the most respected and fearsome coaches around it’s understandable that everyone expected a classic.

United couldn't have got off to a worse start when Bayern's Carsten Jancker was brought down by Ronny Johnsen inside 4 minutes. As the Germans stalled over the free-kick, United organised their wall which Markus Babbel joined and when Mario Basler fired a fierce shot, Babbel broke off and the ball went straight through the hole that was left.

That early goal meant that Bayern were happy to sit back and defend their lead, more than willing to let United have the ball while hitting them on the counter attack when they felt the time was right. For the game, it meant the spectacle that so many had expected looked far from being a reality.

United were also suffering from a lack of strength in the middle of the park having lost Paul Scholes and Roy Keane to suspension and when, after 71 minutes, Mehmet Scholl chipped Schmeichel and hit the inside of the post and then ten minutes later Carsten Jancker mistimed a bicycle kick and hit the underside of the bar it looked like an exhausting season had finally caught up with them.

However, as well as an unbreakable spirit that season, United also had great strength in-depth when it came to their squad and when Teddy Sherringham was sent on to replace Jesper Blomqvist with 20 minutes remaining the instructions he received from the manager were brief and to the point. “Go out there and get us that goal,” Ferguson told him.

Those were not the only motivational words delivered by the United boss that day. Addressing his troops at half-time he famously declared: “This European Cup will be only six feet away from you at the end of this day. But if you lose this match you won't even be able to touch it. Don't you dare come into this dressing room after the match without giving your all.” But as the clock ticked down it appeared his plea had fallen upon deaf ears.

As the game entered the final stages United’s pressure was relentless as they created chances almost at will, “If they equalize I think they’ll go on and win this,” said co-commentator and former United boss prophetically as they laid siege to the Bayern goal. 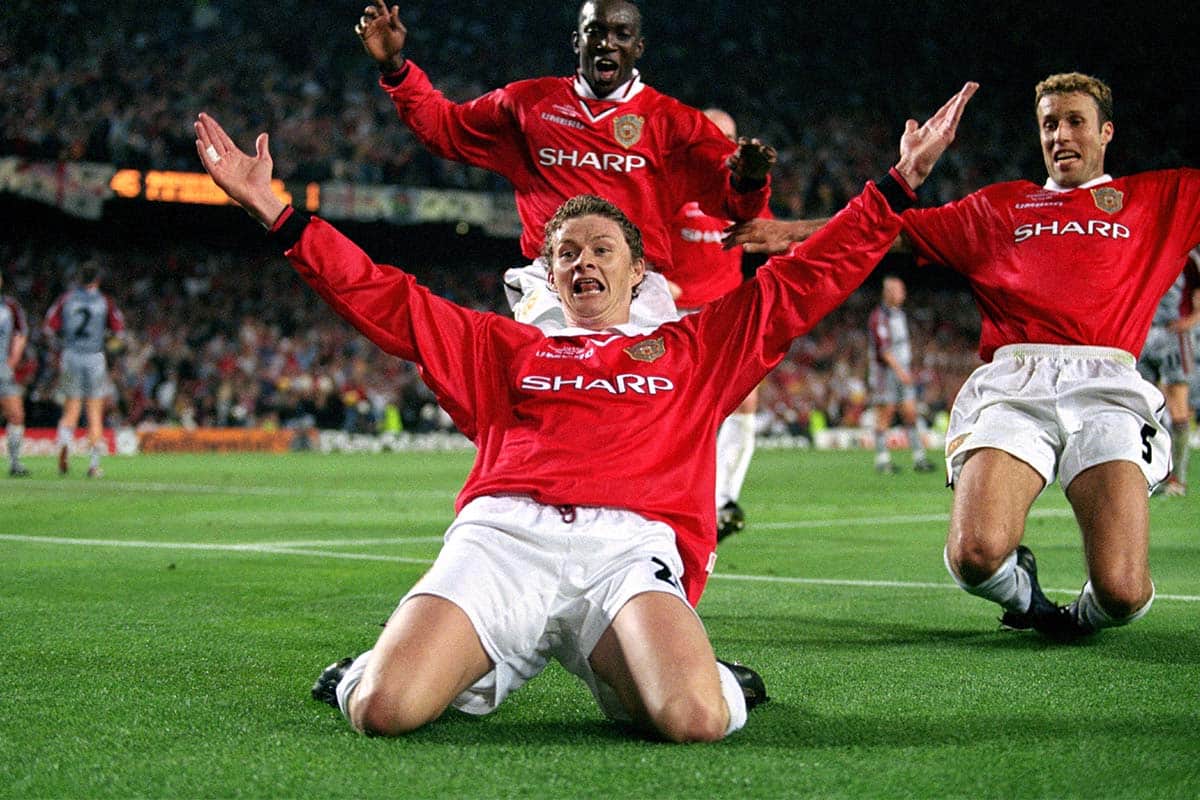 But going into the allotted three minutes of injury time the goal still hadn’t come and as United forced another corner Peter Schmiechel forged into the Bayern penalty area for one last sortie into the box. “The big goalie’s coming up for it,” noted Atkinson. “Can Manchester United score, they always score,” asked match commentator Clive Tylsdsley.

As the corner came across it looked like Bayern had cleared the danger, only for the ball to fall to Ryan Giggs on the edge of the box… “Beckham, in towards Schmeichel, it's come for Dwight Yorke… Giggs with shot… Sheringham! Name on the trophy,” yelled Tylsdsley as the United players, bench and supporters went wild.

Legend has it that as his coaches began preparing for extra-time Alex Ferguson told them there was no need such was his confidence that his team would win the match there and then without the need for the extra 30 minutes. A belief that was also shared by United’s other heroic substitute that night Ole Gunnar Solskjaer who was thrown on for Andy Cole with nine minutes left. “We believed in ourselves. I believed in myself and my abilities. Of course I didn't think it was over. Coming on then I knew they were tiring and I was more likely to score,” he later revealed.

And it was Solskjaer himself who won another corner for United after some trickery in the corner as the game entered the final minute of the extra three. “They must be playing defensive, Schmeichel’s not coming up for this one,” announced Atkinson tongue firmly planted in cheek. “You have to feel this is their year,” professed Tylsdsley, echoing what pretty much everyone watching was thinking by this stage.

Beckham again took the kick, which Sheringham met and nodded the ball down across the goal. “Beckham… into Sheringham… and Solskjaer has won it!!” 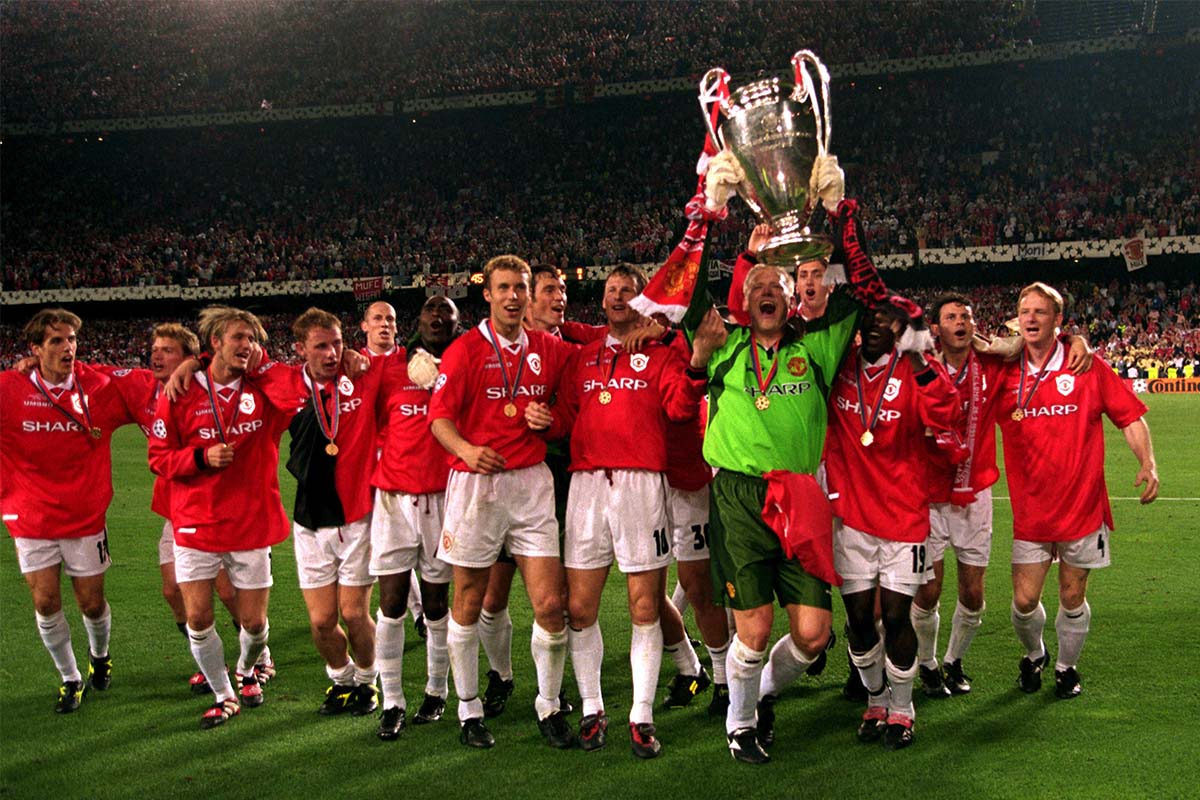 The goal was timed at 92 minutes and 17 seconds of the game and Solskjær celebrated by sliding on his knees, mimicking Basler's earlier celebration while Schmeichel cartwheeled with glee in his own penalty area.

The game restarted, but many Bayern players were virtually unable to continue, overcome with despair,  and needing the assistance of referee Pierluigi Collina to get back to their feet. They were in a state of shock having lost a game they had thought won just seconds earlier.

Such was the feeling that the game was over Bayern Munich ribbons had already been tied to the trophy in preparation for the presentation ceremony; something that didn’t go unnoticed by David Beckham. “I looked around and saw the cup being carried down to the pitch with Bayern Munich colours on it,” he later explained. “Two minutes later, I had it in my own hands and it was ours.”

At the final whistle Samuel Kuffour broke down in tears, thumping the floor in anger, while the giant Carsten Jancker had collapsed to the ground. But for Manchester United they had claimed the most cherished prize in European football and in doing so became the first English club to win the treble, prompting Alex Ferguson to utter those immortal words in his emotional post-match interview in the tunnel: “Football. Bloody hell!”

“Nobody will ever win a European Cup final more dramatically than this,” bellowed Clive Tyldsley as the United players celebrated and who could argue with him?

Yes, there have been other comebacks, there have also been underdogs who have won the trophy unexpectedly, but for a team to score two goals in the final three minutes of a European Cup final in such dramatic fashion has ensured that the Champions League final of 1999 will forever be remembered for one of the greatest climaxes, not just in the history of the competition, but perhaps the history of the game.