Manchester City have spent heavily to reinforce their squad ahead of the 2017/18 season, with players arriving to fill gaps in various positions. Goalkeeper, full-back and attacking midfield are now well stocked, though other areas remain in doubt.

Having gone with a rough 4-2-3-1 for the first match, the Catalan implemented a rough 3-1-4-2 for the second. However, in both setups, the pivot of choice was Yaya Touré.

Acting as a deep-lying playmaker, the Ivorian resurrected his Manchester City career this year with some positive displays in the Premier League and he could be set to continue in an important role with the team. However, he does face competition for his place.

How Could Manchester City Line Up In 2017/18? by FootballWhispers

Fernandinho and İlkay Gündoğan will also be aiming for a regular starting berth, and both are options for the deep-lying playmaker role within Guardiola’s system.

Here we analyse each of the trident, comparing them statistically before concluding on which one should start as Manchester City’s pivot next season.

When it was first announced that Guardiola was taking charge at Manchester City, few saw Fernandinho playing a particularly important role within the team going forward. A combative, feisty tackler who could occasionally bomb forward, he didn’t immediately appear to fit the mould.

However, in his first season working under the former Barcelona and Bayern Munich boss, the Brazilian was utilised well and often. His versatility and work ethic were seen as wonderful assets, leading him to taking up new positions such as left-back when deemed appropriate.

Ultimately, Fernandinho’s best position is as a ball-winning central midfielder. This role makes best use of his tenacity, energetic pressing and willingness to put a foot in. Last season, he made more tackles and interceptions per game than both Gündoğan and Touré, and a lot of that is simply down to where his strengths lie.

According to Transfermarkt, Gündoğan missed 30 matches through injury last season after rupturing a cruciate ligament in December. The absence was a tough one to take – the German had only recovered from another long-term injury months previously. 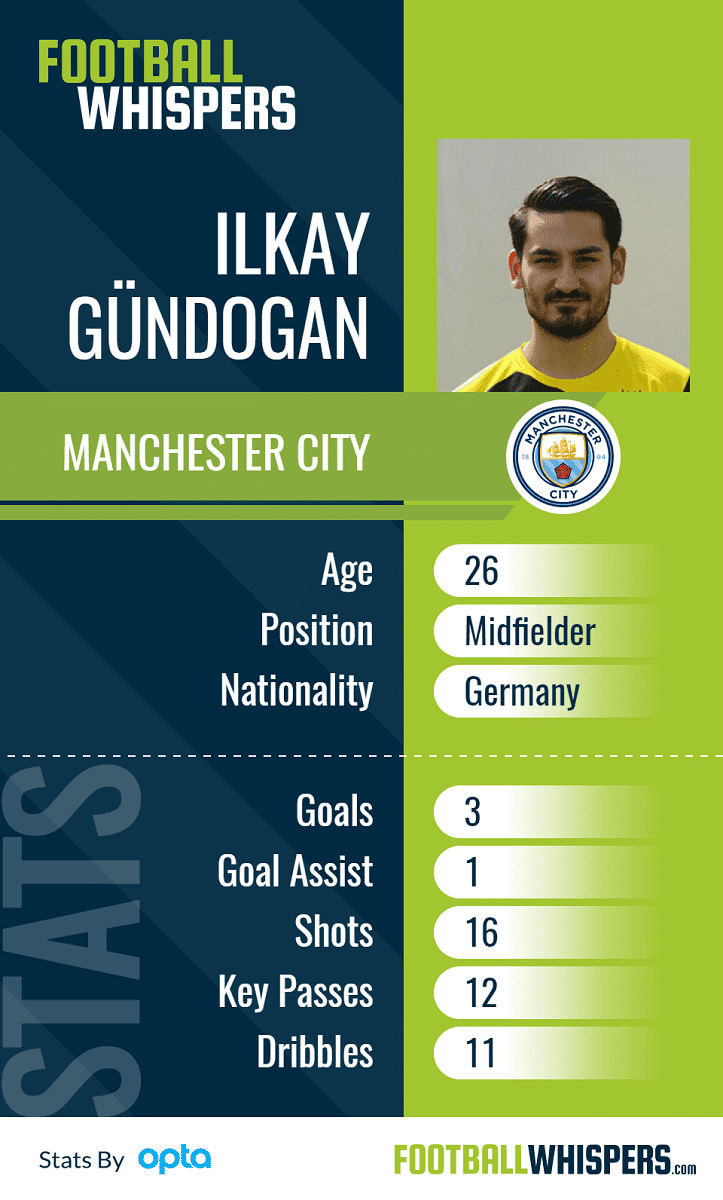 His enforced time on the sidelines scuppered any chance of hitting the ground running following his move from Borussia Dortmund to Manchester City. The Premier League only got glimpses of the player’s talent, but he should return to fitness at some stage next term.

Gündoğan's availability will give Guardiola a slight headache, for the manager has re-deployed Kevin De Bruyne and David Silva as No.8s with positive results. Rather than displace either of those stars, there is a higher chance of Gundogan taking up the deep-lying role.

While this is not his ideal position, he has the technical characteristics to assume it within Manchester City’s system. He is composed, has the passing accuracy to play through pressure, the vision and range to distribute to different areas, and has the ball control to retain possession when pressed aggressively.

His statistics compared to Fernandinho and Touré are telling – he averaged more key passes per game and had a far higher pass completion rate then his team-mates last term, albeit he didn’t play anywhere near as frequently. He was also dispossessed less often.

Touré is the most natural fit for the pivot role within Guardiola’s line-up, which goes some way to explaining his current status.

He played a similar role while at Barcelona and, while he made his name in England as a roving, forward-thinking central midfielder, he can sit deeper and remain effective.

Physically imposing and technically extremely adept, the 34-year-old is able to resist pressure and play passes through the opposition lines.

He may not have the athleticism or awareness to position himself correctly at all times, but when on the ball he can do things few others in Guardiola’s squad can.

Touré was integral to Manchester City’s build-up and progression last season, something evidenced by the fact that his average passes per game of 71.9 was a higher figure than that achieved by any other player in the team.

However, with Gündoğan nearing a return to full fitness, his position as conductor may soon come under serious threat.

Considering Gündoğan will not be fit for the start of the new season, Touré is likely to retain his place as Manchester City’s first-choice pivot. Fernandinho, meanwhile, will probably continue to be utilised in a variety of different positions depending on the circumstances.

However, once Gündoğan is back playing, it is likely that he will be experimented with as the deeper-lying midfielder, where his passing, control and intelligence could come to the fore. And, if the experiment works, expect him to nail down the berth for good.