Saúl Ñíguez is the latest player linked to the Premier League champions, a path trodden by Fred, Jorginho, and Frenkie de Jong before him.

The first two of those options moved to rivals in England – Manchester United and Chelsea – and it seems, so far, that City dodged a bullet in failing to buy them. Fred has failed to make an impression across the city, making just 13 league appearances so far. And Jorginho, it turns out, can tick-tick-tick a lot, but comes up short on the tackling.

But back to Saúl. The Spain international appears to be attainable but is he, unlike these past targets, an adequate replacement for Fernandinho? 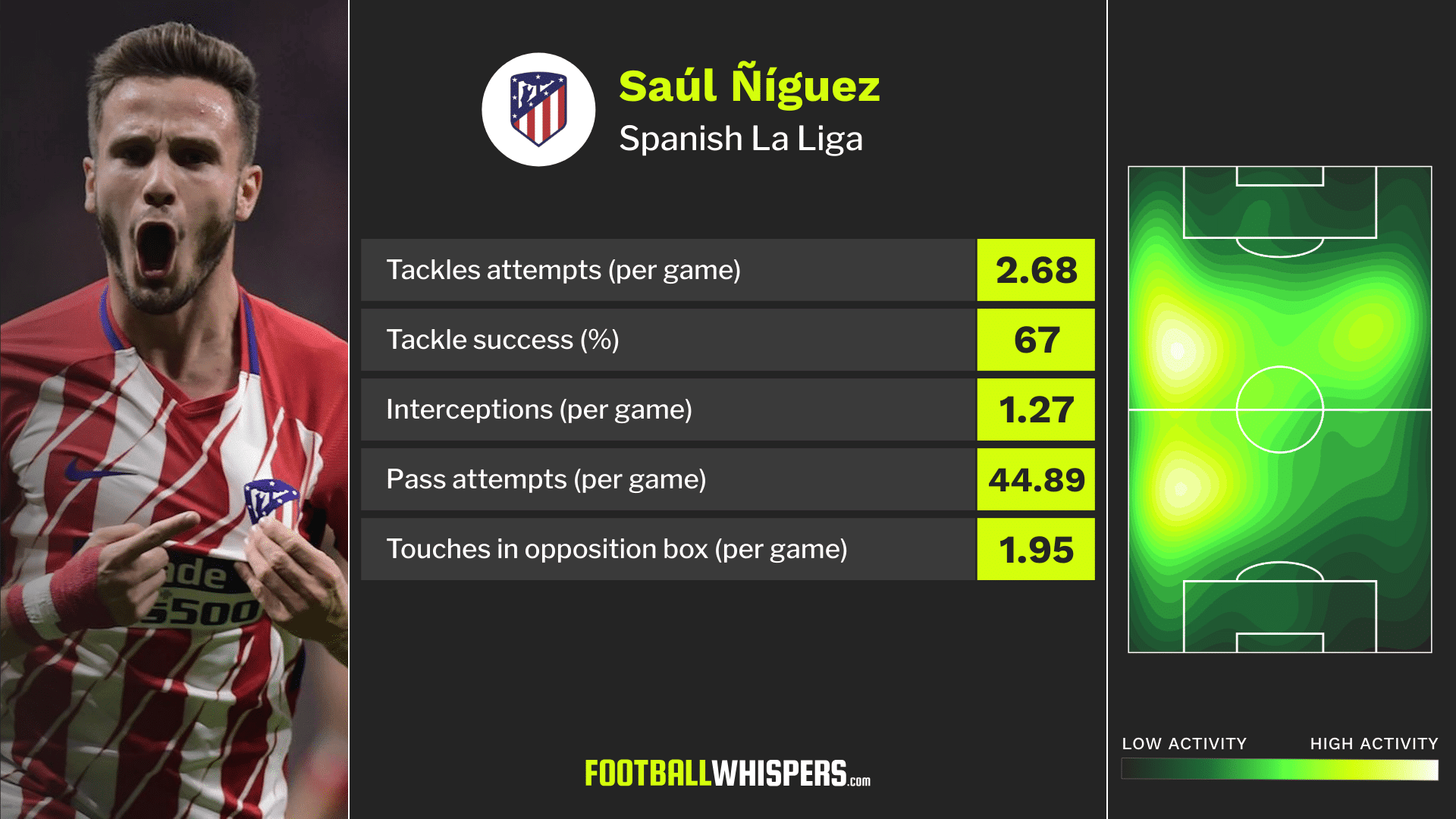 His versatility – he’s played at left-back, as a wide midfielder as well as in the centre – could make him a useful addition to City’s squad. With the variety of formations and systems Pep Guardiola utilises, a player who has experience all over the pitch could be a very useful; a James Milner-esque problem solver.

Two big positives in Ñíguez’s favour is that he’s both athletic and willing to defend. However, a willingness to defend doesn’t necessarily translate into reliable skill. So let's look into the numbers.

His tackle success rate is around 67 per cent (Fernandinho’s is 75 per cent), and he actually averages a similar amount of fouls (1.4) as successful tackles (1.78) per game.

Although Saúl makes far fewer passes than Fernandinho – 44.89 attempts per game compared to 78.03 – this is mainly because of their sides’ differing styles. As a proportion of the passes that the whole team attempts, they’re very close, with Saúl making up 10.0 per cent at Atléti and Fernandinho 11.1 per cent at City.

Comparing their pass success rates would be just as foolish as comparing their pass totals, as both stats are impacted by style of play; Saúl’s 76.4 per cent pass completion rate looks shoddy when put alongside Fernandinho’s 87.8 per cent.

However, consider how each side shapes up and things look different. Atléti’s pass completion rate is 79.4 per cent, while City’s is 89 per cent. Relative to their teams, the duo aren’t too far apart.

This is all to say that thinking about how Saúl would fit into Manchester City – a team at the other end of the style spectrum from Atlético – is difficult. But there are interesting signs there.

It’s also interesting to think about how the addition of Saúl might affect how City play. His added energy might mean that the entirety of their midfield can engage in a high press, rather than having to design pressing plans around a 33-year-old in the middle of it.

While there are criticisms Guardiola’s teams only work with the most expensive players in the world, there’s no doubt he can create something marvellous with marvellous players.

Saúl may not be an exact like-for-like but there’s enough about him to think he could be an interesting addition to City’s behemoth.