As a football fan you’d struggle to scroll down any daily gossip column without seeing a story linking Raheem Sterling to Real Madrid.

The Manchester City and England star's future is far from certain. According to numerous reports, contract talks between the winger and the Premier League champions have hit an impasse.

Sterling, it's claimed, wants to become one of City's top earners, joining the likes of Kevin De Bruyne, David Silva and Sergio Agüero. The club, however, are reluctant.

While many think the Manchester side spend freely and at times recklessly, there is a tight wage structure in place; it's why City pulled out of a deal to sign Alexis Sánchez last January and why mega-money contracts are only handed sparingly.

But Sterling is in a strong position. His contract expires in 2020 and the interest from Madrid is increasing. Los Blancos could sign him for a knockdown price next summer, taking advantage of the fact he'd only have one year remaining on his current deal.

This would be a huge blow for City. Despite the criticism he's received, and the media scrutiny he's had to endure, Sterling is one of the most vital cogs of Pep Guardiola's highly demanding attacking game.

With four Premier League goals to his name so far this term, the skilful winger has picked up where he left off last season: in fine fettle in front of goal and contributing to several phases of play.

Many of the stories written about the former Liverpool star are extremely unfair, especially those about his private life. And while he may not have shone often in an England shirt, few of his teammates have either.

However, to silence his critics, Sterling produced his best performance for the Three Lions on Monday in the 3-2 win over Spain. The winger starred in his usual role out wide; fry cry from struggling while playing off or ahead of Harry Kane in Russia.

He struck twice in the first half and pointedly celebrated his opener – a thunderous finish past David de Gea – by cupping a finger to his ear.

“I haven't scored for a while for England so it was frustration, all the pressure, it all comes out in the celebration,” he said.

Sterling's struggle to find the net for the Three Lions was curious. Prior to his double in the south of Spain, he had netted just twice in 45 appearances for his country.

That record was, understandably, often mentioned by commentators and questioned by reporters. But no more. The 23-year-old's display in Seville was a statement performance. The mark of a man comfortable on the biggest stage and against elite opposition.

And it made Real Madrid take notice. By Tuesday morning reports emerged the Champions League winners interest had again been piqued. By Wednesday they were supposedly considering launching a bid next summer.

At this stage, it's mere speculation but that could quickly change. Sterling would then be left with a big decision.

At Manchester City, Guardiola is moulding him into one of the finest players in his position, similar to the way he transformed Franck Ribery when at Bayern Munich.

Sterling can now play comfortably off either flank or down the middle, and has made huge improvements, both tactically and technically, under the Catalan coach.

He's also always adding need strings to his bow. His movement is sharper. His decision-making smarter. His passing more penetrative. And his desire to break into the six-yard box rewarded with countless goals.

All the above is what makes Sterling a special talent. He is now one of the most important members of both the City and England side and has become a match-winner. 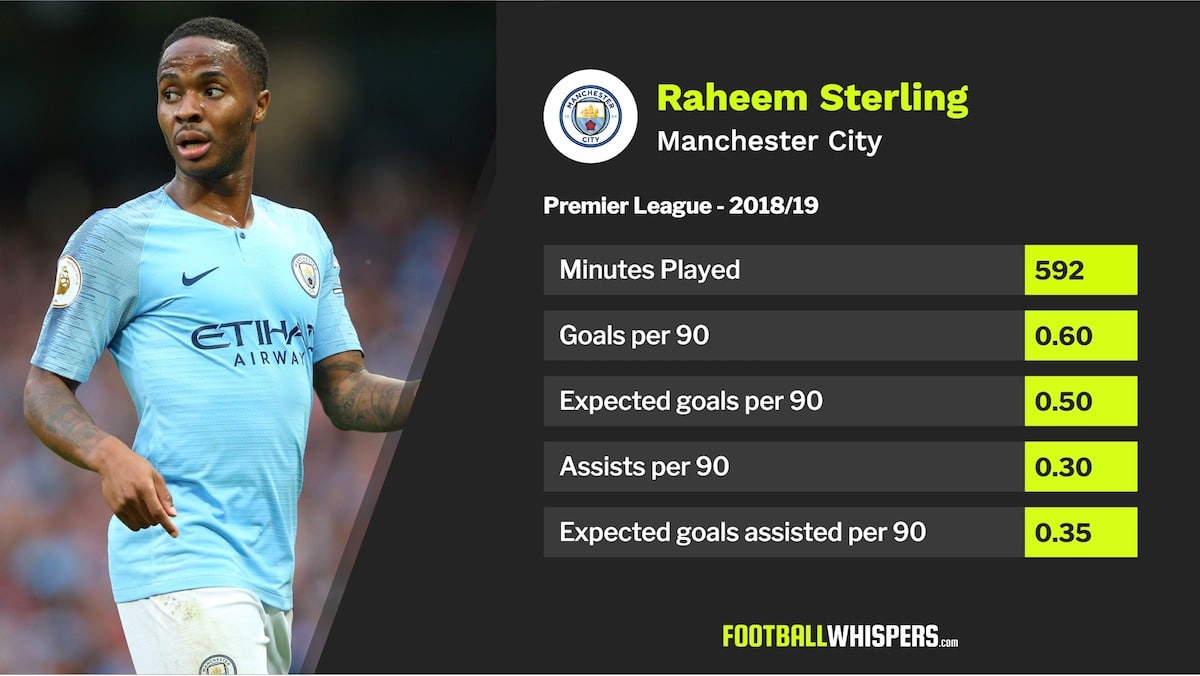 And match-winners deserve big contracts. It's why City paid up for De Bruyne, Silva and Agüero and why the highest earners in the game are constantly attacking players rather than defenders.

Last season, for example, Sterling was vital in helping Manchester City become the first team to reach 100 points in the English top flight. Without his goals, it quite simply wouldn't have been possible.

When other members of City's star-studded side struggled to find a way through stubborn and well-drilled defences, especially in the gruelling late autumn, early winter schedule, Sterling often had the answer.

There were last-gasp winners in the Premier League against Bournemouth, Southampton, Huddersfield Town. Match-winning strikes against West Bromwich Albion and Newcastle United. The equaliser in a 1-1 draw with Everton.

That's eleven points right there and while, without those, such was City's dominance, they still would have cliched the title, they certainly wouldn't have broken as many records along the way.

Sterling has proven himself worthy of a new contract, and a big one at that. He is still young and has the better part of a decade on his side. And, most promisingly, he is only getting better.

Under the tutelage of Guardiola, a man who shaped Leo Messi’s successes and got the best out of Arjen Robben, Sterling can thrive for years at the Etihad.

So Txiki Begiristain and the club's hierarchy should get on the phone to Sterling’s party and sign him up on a lengthy deal, even if that means spending the big bucks.