Natural ability used to be enough.

In the past, players with that something special could coast on that and that alone. Managers would build a team around them, they’d sign players to do the dirty work for them and they’d make life as easy as possible for them.

But times have changed. Teams turning out with luxury players are close to extinct now. If the work ethic isn’t there, it’s unlikely you’ll be seeing such players in a starting XI anytime soon.

Manchester City forward Leroy Sané falls into that category. He’s one of the most dangerous attackers in world football right now, yet he made just 21 starts for Pep Guardiola’s title winners during the 2018/19 campaign despite his fine form.

There is a feeling that the former Barcelona coach doesn’t quite trust the Germany international. And this seemingly hasn’t gone unnoticed with Real Madrid and Bayern Munich reportedly interested in bringing Sane’s spell with the Premier League champions to an end.

City could be tempted to cash in on the 23-year-old to bring in a player perhaps better suited to Guardiola’s demands. But unless this player has the potential to be truly exceptional, Sane should not be going anywhere.

Simply put, he’s too much of a unique player to give up on just yet.

His output over the past two seasons has been nothing short of remarkable. City claimed back to back titles, the first team to do it in a decade, and he played a vital role in both of them. 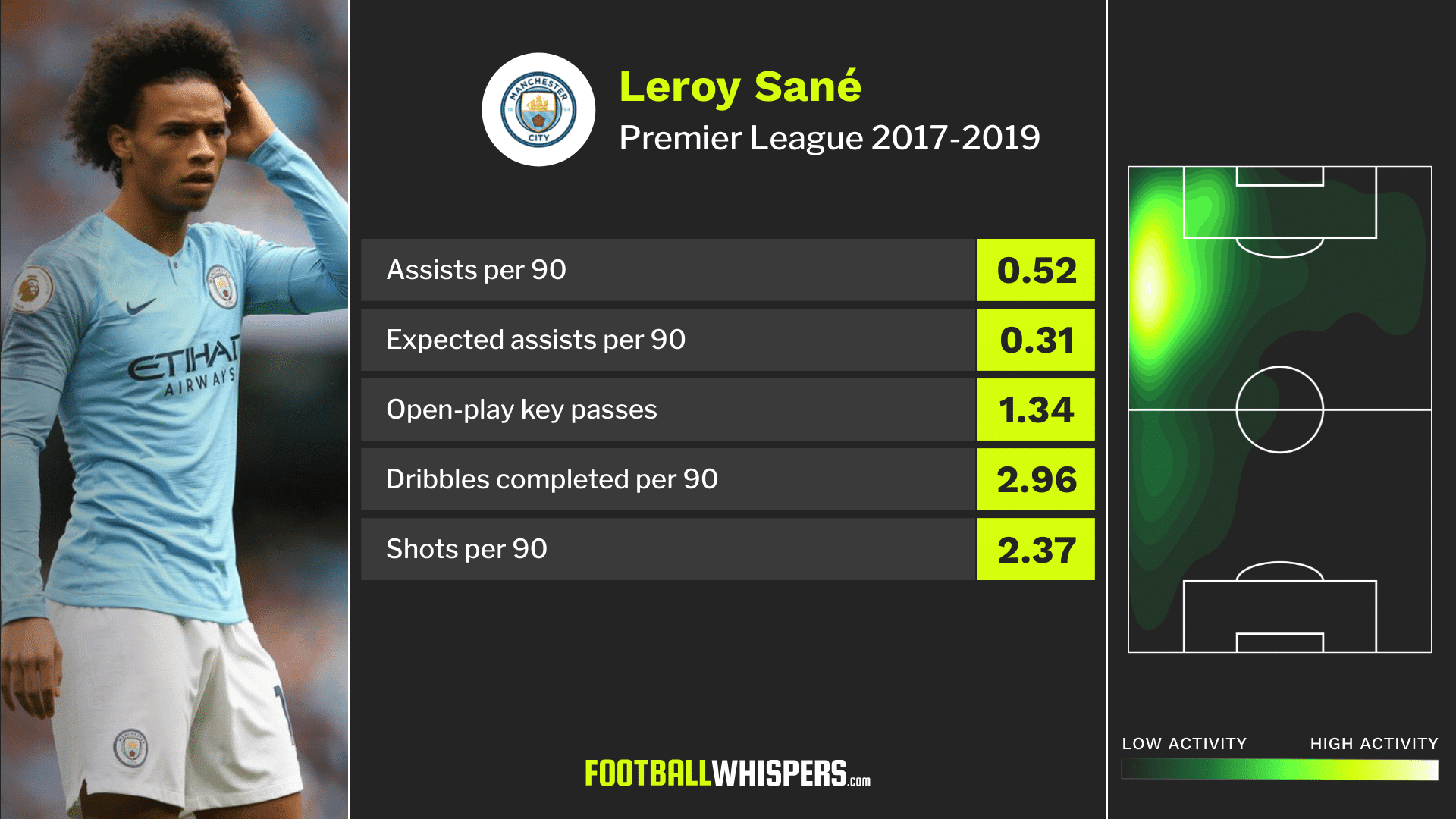 Over the past two seasons, Sané has appeared in 4,289 minutes in the Premier League. During this time he's averaged 0.52 assists – a number no other attacker in the English top flight can match during this period.

He's averaging 0.39 open-play assists. Again, it's a number that sees him ranked first in the league when looking at attackers.

His expected assists total of 0.31 sees him peerless in that category as well. On top of that, Sané is creating 0.52 big chances on a per 90 minute basis. Which is, as you guessed, the best once again.

He's ranked third for dribbles completed behind only Eden Hazard and Wilfried Zaha. Showing why he's so vital to City because he can break the lines and beat a man. Even the sternest of Premier League defences struggle to contain him.

His average of 8.26 touches in the opposition's penalty box is the third highest, this time behind Mohamed Salah and City team-mate, Raheem Sterling.

He's not just a creator, either. His 0.41 goals during this period sees him in the top 20. He's overperforming his expected goals (0.22) but it's expected when he's adding quality to his shots, as highlighted by his post-shot expected goals per 90 average being 0.31. 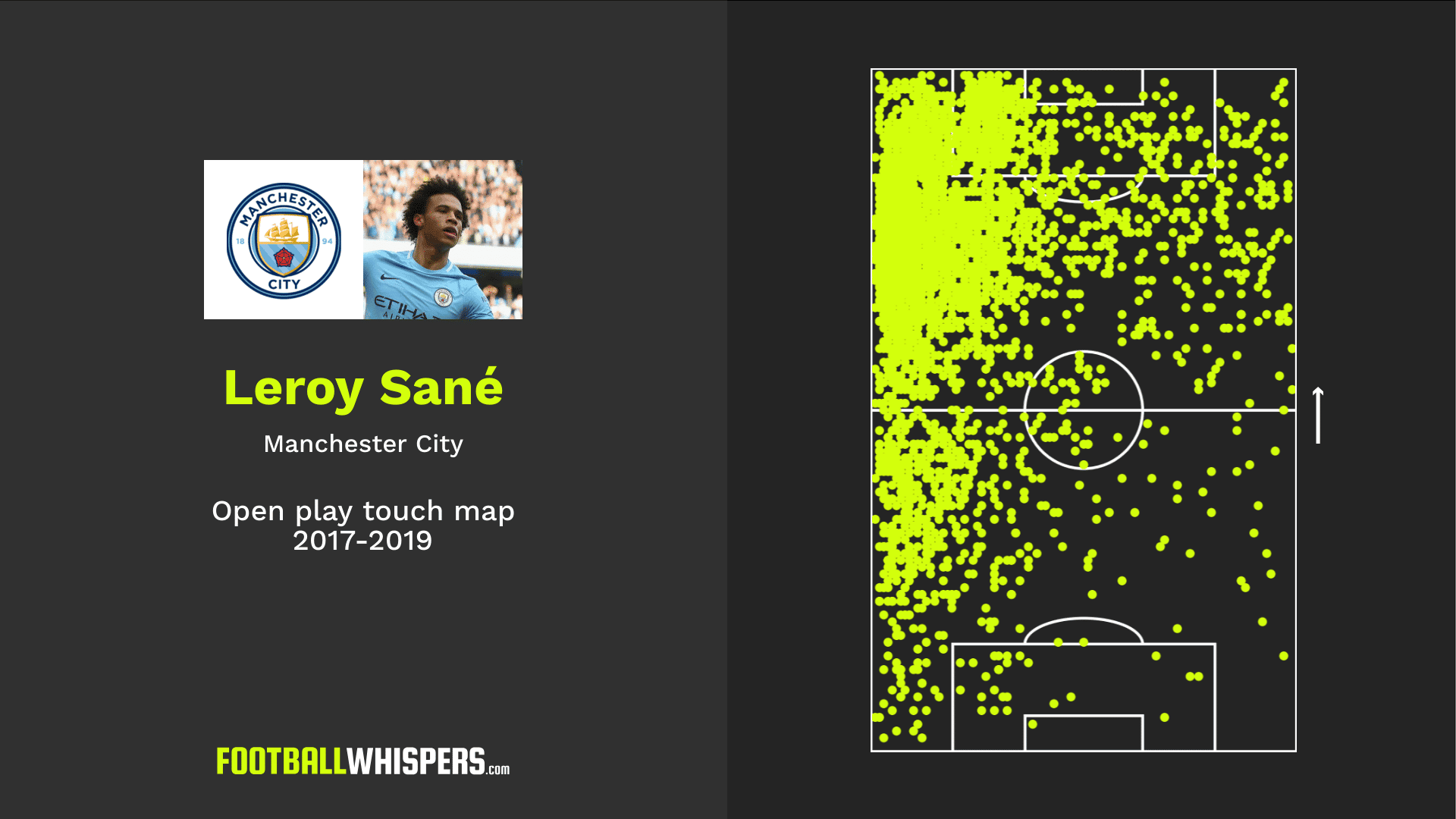 Sané is unpredictable. At times he looks unstoppable. Along with Sterling, he's the only player in the Premier League to score 10 or more goals and claim 10 or more assists in the last two seasons.

He's not considered world class but his numbers are heading that way. He might not be the perfect fit for Guardiola but he's too good to be allowed to go elsewhere.

His deal ends in 2021. His value would plummet next summer but City would still be able to make a profit on the £37million they paid for him ahead of the 2016/17 season. A player with such talent is worth another season. It might click for him. And then Premier League rivals will be in real danger.