Looking at Manchester City‘s squad, it's not difficult to see why they obliterated record after record on their canter to Premier League supremacy last season.

In Sergio Agüero, they have one of the greatest strikers of the modern era and, in Gabriel Jesus, a highly promising understudy. Raheem Sterling and Leroy Sané are among the most electrifying wingers in world football while you'd be hard pressed to find too many midfielders as ultra-consistent as Fernandinho, or as visionary as David Silva, another player with a readymade heir  in Bernardo Silva.

Backed up by strength at the back and Ederson, one of the finest young goalkeepers in the game, City's squad is stacked.

Enterprising full-backs are integral to that squad; Pep Guardiola's use of inverted full-backs to offer extra passing angles and create space in the opposition half was a prominent feature of City's dominance last season.

Ahead of the 2017/18 campaign, out went Gaël Clichy, Aleksandar Kolarov, Bacary Sagna and Pablo Zabaleta and in came Kyle Walker, Benjamin Mendy and Danilo, players Guardiola earmarked as capable of executing his specific tactical instructions.

His prediction was spot on. Walker enjoyed an excellent season while Mendy instantly established himself as one of English football's most dangerous full-backs.

Of course, the young Frenchman's time at the Etihad has been decimated by injury. Having ruptured his cruciate ligament, in September 2017, just a month after his debut, he has missed the vast majority of this season due to knee surgery, a foot problem and an injured meniscal.

With Mendy's continuing fitness woes, Guardiola has confirmed left-back as a position of priority come the summer transfer window.

“I don’t know what’s going to happen but we are thinking about the chance to find somebody in that position, but I don’t know,” the City boss said prior to Saturday's victory over Bournemouth.

“There are three or four positions I think we have to try to look for and we have some ideas. I don’t know in the end what is going to happen but it is an option, yeah, to buy a left-back.”

Of course, even without Mendy, City are not lacking in this area. Oleksandr Zinchenko's impressive recent form suggests the Ukrainian could become a fixture in Guardiola's line-up while Fabian Delph can be deployed on the left side of defence. Aymeric Laporte has also filled in there but is obviously best at the heart of City's backline.

However, with the club looking to strengthen – and with reportedly up to £200million to spend – we have identified five potential Manchester City left-back targets.

The 22-year-old has emerged as one of Premier League's brightest prospect after a fine run in the Leicester City team.

Chilwell is perhaps the ideal candidate; young, talented and homegrown, the five-time England international is reportedly a prime target and would presumably be excited at the chance to work under Guardiola, even if he recently spoke glowingly of new Foxes boss Brendan Rodgers.

A product of the Leicester youth academy, Chilwell is a gifted ball-carrier, his powerful, upright running style reminiscent of Gareth Bale. He ranks fourth in successful take-ons per 90 for Premier League defenders this season with 1.44 and is an incisive passer, with 25 open play key passes and a total expected goals assisted (xA) of 3.57, ranking him seventh.

The fact he has been dispossessed more (42) than any other defender suggests he can still improve and tighten up his decision-making, something on which Guardiola would focus. 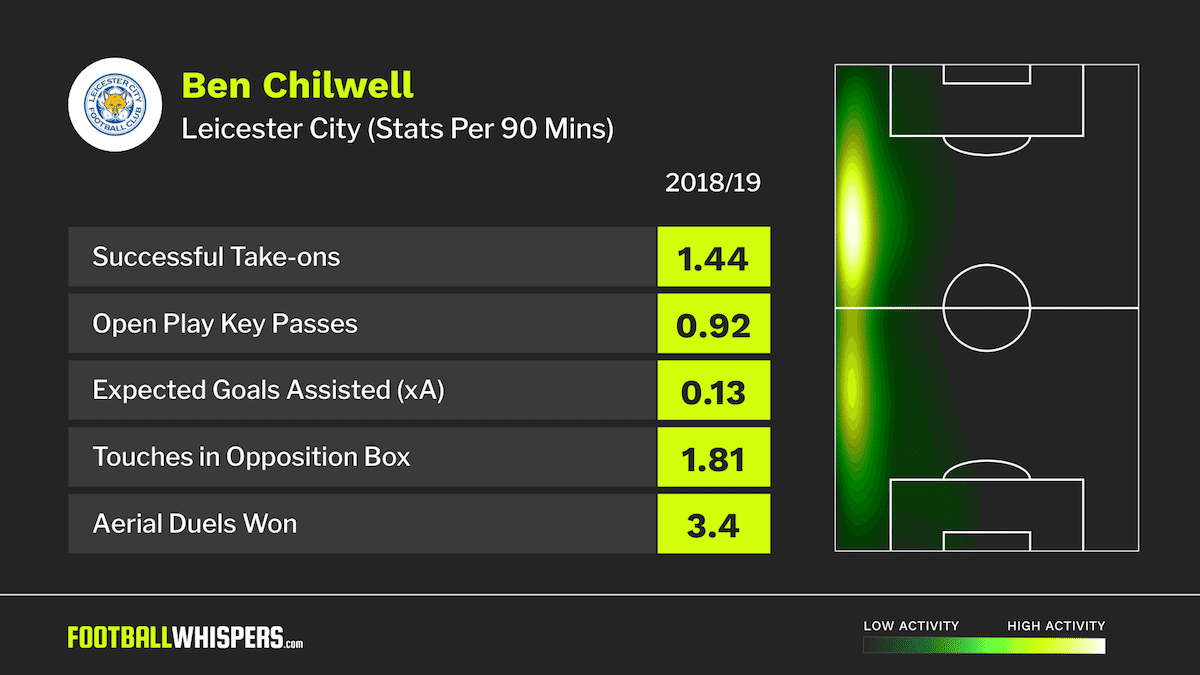 Extremely versatile, Guerreiro can also comfortably slot into midfield and has shown an edge in the attacking third this season, with two goals and five assists in the Bundesliga (his 0.48 assists per 90 minutes is the highest among players in his position).

A skilful, clever operator on the flank, Guerreiro can open defences with his passing – and stretch them with his touchline-hugging runs. Still improving having turned 25 in December, he has scored four of Dortmund's last five Champions League goals.

Another versatile player – and one who knows Guardiola well from their time together at Bayern – Alaba has spent his entire professional career in Bavaria, save for a brief loan spell at Hoffenheim in 2011, and may be swayed by the idea of reuniting with his former coach.

Still only 26, the Austrian is widely regarded as one of the most complete left-backs in the world; combining his threat going forward with an astute fulfilment of his defensive duties.

Alaba holds Guardiola in the highest regard after three years under him at Bayern, last year hailing the impact the Catalan tactician had on his game.

“He took me to another level,” Alaba said via AS in 2018. “Under him, I knew I could play a lot of positions. He is one of the best coaches in the world, if not maybe the best from what I have seen.

“He bought a new style, not only in our team. We learned a lot about football and the style we played was great.” 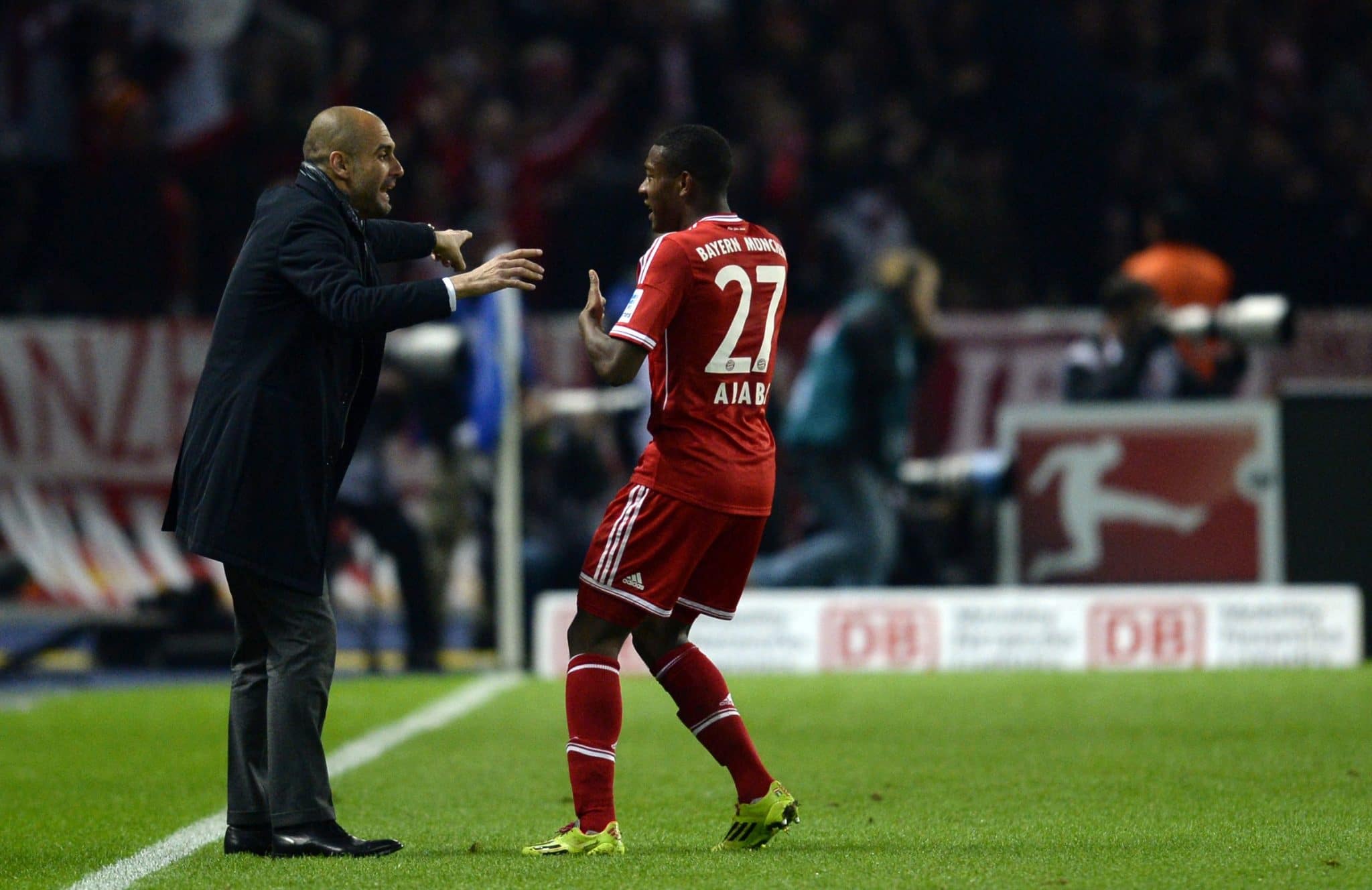 Benfica's impressive 23-year-old is another left-back who could blossom wonderfully under Guardiola's tutelage.

The Spaniard has become a regular in Lisbon but is a player the City manager will know of, having been part of the Barcelona youth set-up until leaving for Portugal in 2015.

Another forward-thinking player, Grimaldo has scored five goals and notched five assists to help Benfica to the top of the Primeira Liga table this season. He's also completed more take-ons, passes and attempted more shots than any other defender in the Portuguese top-tier this term.

An Arsenal and Atlético Madrid transfer target, Grimaldo will be in high demand this summer.

It's been a big year for Tagliafico. After joining Ajax from Independiente in January 2018, he featured prominently for Argentina in last summer's World Cup and has steadily enhanced his reputation in Amsterdam this season.

The 26-year-old has caught the eye with four goals during Ajax's Champions League campaign, attracting interest from Real Madrid, who will likely also be in the market for a left-back this summer given Marcelo's expected departure.

City have also been linked with Matthijs de Ligt, another member of Erik ten Hag's impressive Ajax side. If the Premier League champions pursue the 19-year-old golden boy, they may plump for a double swoop with Tagliafico added into the mix.