In terms of modern football theatre, Pep Guardiola appears to have mastered the art of the heated post-match, on-field discussion; from passionately instructing his own players Joshua Kimmich and Raheem Sterling to an intense deconstruction of Nathan Redmond’s performance in opposition.

The latest individual to be the target of one of the Manchester City manager’s tête-à-têtes was Lyon midfielder Houssem Aouar. Unlike the above trio, Guardiola waited for the 20-year-old to reach the tunnel in the wake of the 2-2 Champions League draw at the Groupama Stadium, before engaging him.

Factor in Guardiola’s quotes after the game as the Catalan said: “Houssem Aouar is a very good player, he is incredible. We talk a lot about [Tanguy] NDombele but Aouar is also excellent. He’s very calm with the ball at his feet, with an excellent technical quality.”

It’s no great surprise, therefore, that with the January transfer window approaching, Aouar is viewed as a potential signing for the Premier League champions. 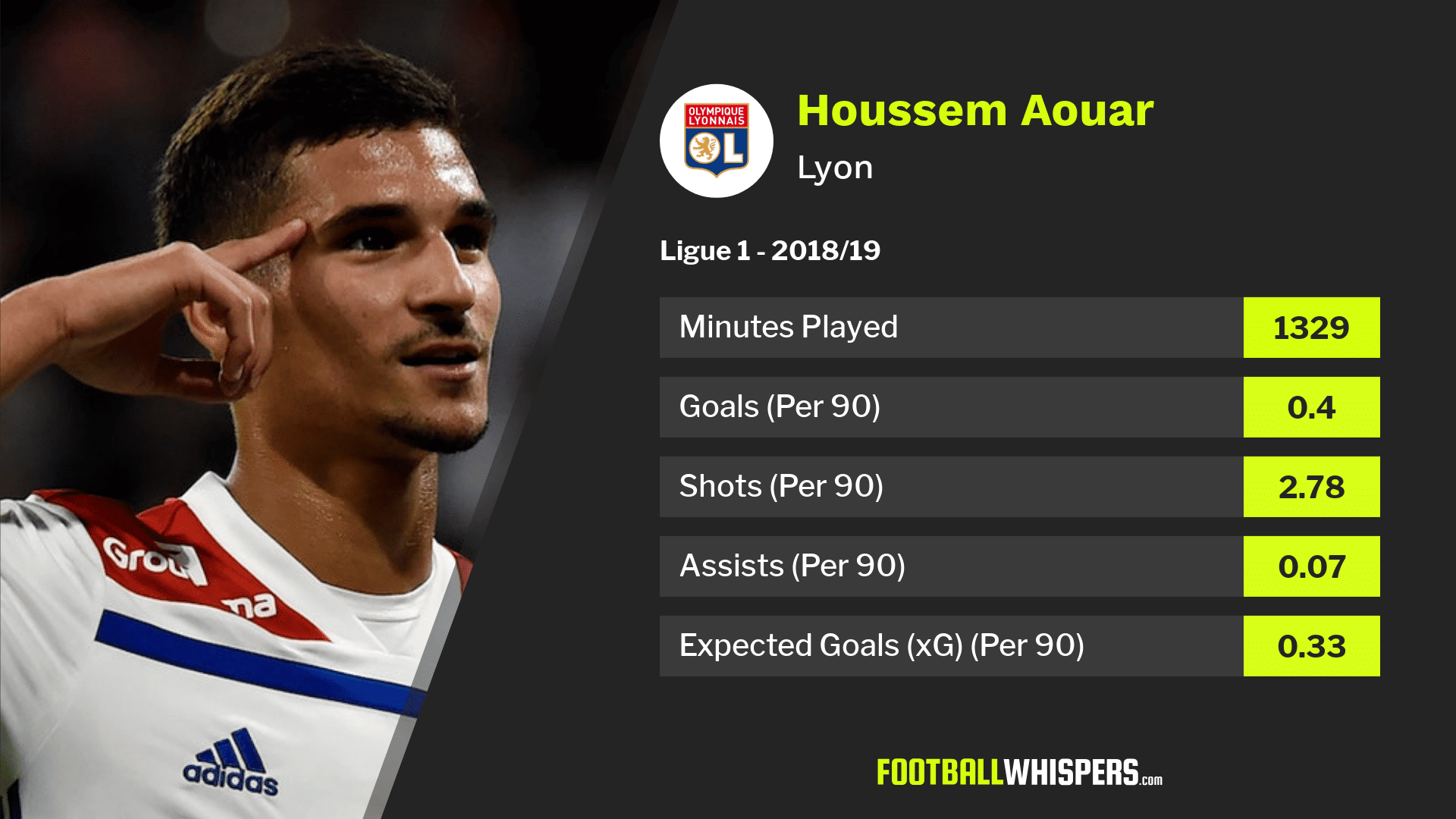 With Lyon qualifying for the last 16 of the Champions League, targeting another top three finish in Ligue 1 and having shown their resolution with Nabil Fekir and Liverpool, the chances are, if City are genuinely interested in Aouar they may have to wait.

However, it is clear Guardiola is an admirer and seeds have been sown for a potential deal in the future. A lot can change with Aouar in terms of form, injuries and confidence but, based on the evidence of the last 18 months, he looks a special talent.

City under Guardiola remain in constant evolution and although there have been a couple of missteps in the market – Claudio Bravo and Nolito – since he arrived at the club in 2016, their transfer business has been largely sound.

Problem areas post-Manuel Pellegrini have been identified and fixed: goalkeeper, albeit at the second attempt with Ederson, and full-backs, with the arrivals of Benjamin Mendy and Kyle Walker.

Although not a full-blown issue, there is an underlying concern within the City squad that is yet to be fully addressed and the indication is that Aouar could be the long-term solution.

Since Guardiola began his work at the Etihad Stadium, no individual has played more Premier League minutes than Fernandinho (7,143). The Brazilian has proved as vital and important as Kevin De Bruyne (third with 6,068 minutes) to realising his coach’s vision. However, unlike the Belgian, he doesn’t have an obvious replacement. 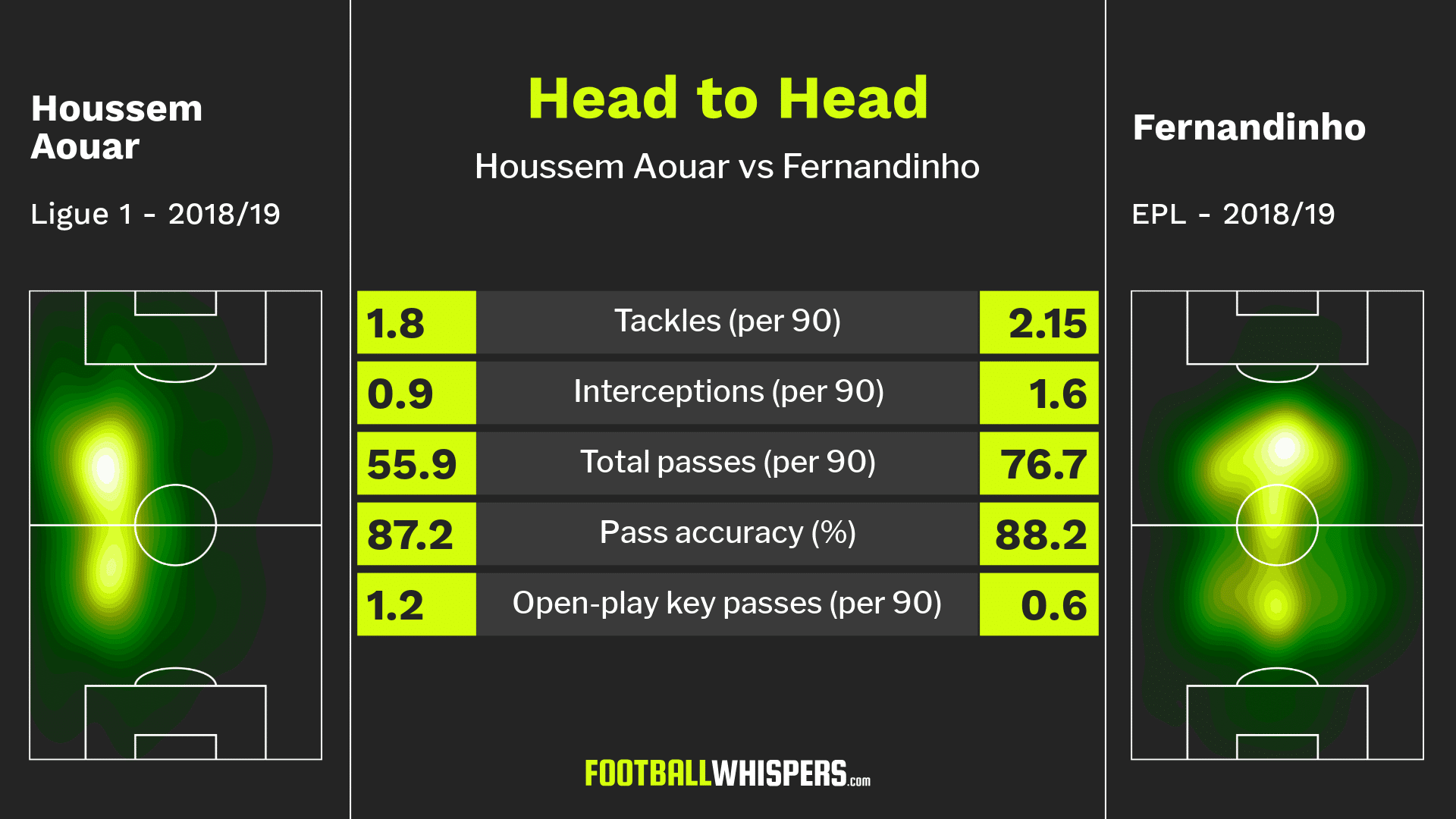 When De Bruyne suffered his knee injury in November it gave hope to the rest of the top-flight that City would be weaker. They were, to an extent, but Bernardo Silva and Riyad Mahrez bore De Bruyne’s minutes and, in truth, it was an injury that was easy to manage, given their resources and stage of the season that it occurred.

If Fernandinho was to suffer the same fate, what would be the answer? Ilkay Gündoğan has the positional play and passing rhythm but not the same defensive aptitude, a worry in the bigger games, while Fabian Delph just isn’t at the same level of the German.

Guardiola has mentioned experimenting with John Stones in a holding role but it’s yet to be properly road-tested and it would be huge reach to see the England centre-back stepping into that role seamlessly for more than a few games here and there.

City need both a deputy for Fernandinho and someone who can take over long-term, given the Brazilian will be 34 by the end of the season and will have had 14 full campaigns under his belt. As durable as he is, eventually he will buckle.

Aouar’s suitability amid all this is an interesting one because he’s largely been discussed within the framework of becoming ostensibly an attacking player. Indeed, of his 23 appearances this season for Lyon, only one has been as a central defensive midfielder.

He’s tended to operate to the left of a midfield three or in a more advanced role where his passing, close control and creativity comes to the fore. Six goals and four assists, in all competitions, reinforces his offensive abilities.

However, let’s not forget that when Fernandinho arrived in Manchester he wasn’t a bona fide defensive force, more a deep-lying passer who liked to get forward. He scored 53 goals in 284 games for Shakhtar Donetsk and twice hit double figures in a season.

As Guardiola has worked closely with him, he’s been able to bring together all Fernandinho’s best elements while bringing out greater defensive qualities in the Brazilian. Given his coaching qualities, who’s to say he can’t do the same with Aouar?

In terms of numbers this season, the France Under-21 international’s strengths have focused on the final third: he ranks tenth among Ligue 1 midfielders for scoring attempts per 90 (2.77), 16th for successful take ons (1,82), 14th for touches in the opposition box (3.99) and sixth for expected goals per 90 (0.32).

His tackles per 90 are well down in 73rd (1.76), his success rate at 65%, and interceptions 71st (0.94). Of course, much of that is down to the role he has in the team as Aouar has the security of NDombele alongside him, but clearly if he is genuinely the successor to Fernandinho, his defensive game is yet to properly tested.

That being said, City are so good, you don’t have to defend as much. Fernandinho’s numbers for tackles per 90 (2.15), success rate (75%) and interceptions (1.55) aren’t wildly superior to Aouar’s, and this is from an experienced, seasoned veteran.

Likewise, Aouar possesses relatively low passing numbers, just 55.93 per game at 87.2% accuracy. But it’s no surprise, given the identity of his manager, Fernandinho’s figures in the Premier League are considerably inflated in terms of volume 76.7, but his 88.2% accuracy isn’t that much more efficient than the Lyon midfielder.

The raw tools are maybe there for Aouar to become a long-term project for Guardiola and one day step into the Brazilian’s shoes at the Etihad but he’s still only 20 and it will require significant time, patience and maybe a few of Guardiola’s famous one-to-one chats in redefining the young Frenchman’s game.