The goodbyes are becoming all-too-frequent for Manchester City. First, it was Vincent Kompany, now David Silva has announced the upcoming season will be his swansong at the Etihad.

“This is the last one,” he said at a press conference in Gran Canaria. “Ten years for me is enough. It’s the perfect time for me. Initially, City were talking about two [more] years.

“It completes the cycle. It’s a nice round figure. I can never see myself playing against City for another team. So ten years – that’s it.”

El Mago's announcement gives Pep Guardiola time to plan for a future without the diminutive genius. But losing a player who could rightfully claim to be the greatest in the club's history is a blow which cannot be softened.

Gliding between the lines, caressing the ball with every silky touch and picking out passes others wouldn't see with the benefit of an arrow, Silva has been more than City's greatest. He will be remembered as one of the finest foreign players to grace the Premier League. Ever.

“We have to enjoy him in the year that he has left,” Guardiola said in response to the news.

“He has been one of the greats not only in Spanish football but in European football as well. He has played for ten years in Manchester and it is not easy to perform in that league for someone with his qualities. He has done incredibly well.” 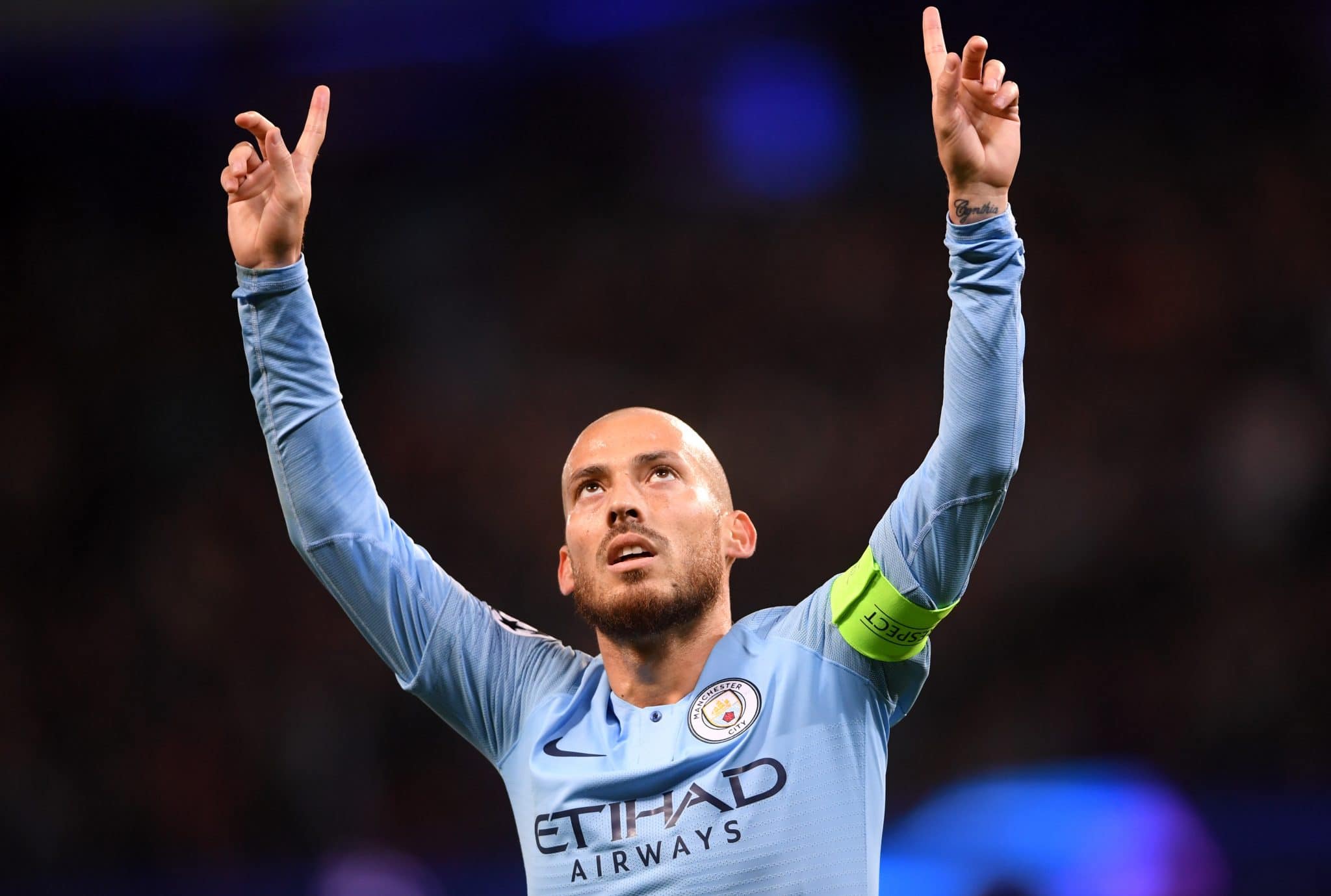 Whoever is tasked with succeeding the former Valencia schemer needs to be pretty damn good. In fact, they need to be special. According to reports, Manchester City have their eyes on just the player: Real Madrid's Isco.

Despite his status as one of the most exciting, mercurial talents in European football, the Spaniard has never been a mainstay at the Santiago Bernabéu. Zinedine Zidane's return to the dugout could change that. It was under the Frenchman that Isco – nicknamed Magia (magic) – enjoyed his most significant role in the team.

But Real is a club like no other. Eden Hazard and Rodrygo have joined, while Vinícius Júnior is on the road to recovery and Marca report he is one of the players will be sold to offset Los Blancos' €300million summer splurge.

However, thanks to his price-tag – believed to be in the region of £80million – there aren't many clubs who can afford Isco who, at 27, is slap bang in his prime. He will not be a long-term investment.

That makes the classy playmaker the perfect target for Manchester City who are going to have a spot opening up for a midfield conductor in 12 months time.

Using Football Whispers' exclusive Player Persona radars, which characterise players based on their statistical output, we can see a clear similarity between Silva and Isco (below).

Both players are heavily involved in build-up passing with Silva completing 66.12 passes per 90 last season while Isco managed 62.37. Both take roughly 1.9 shots per 90, too.

However, that isn't a trait which aligns with Guardiola's philosophy. The Catalan genius will not tolerate a player taking unnecessary risks in possession when they could pass instead and that is an element of his game Isco would have to curtail if he joined the Citizens. 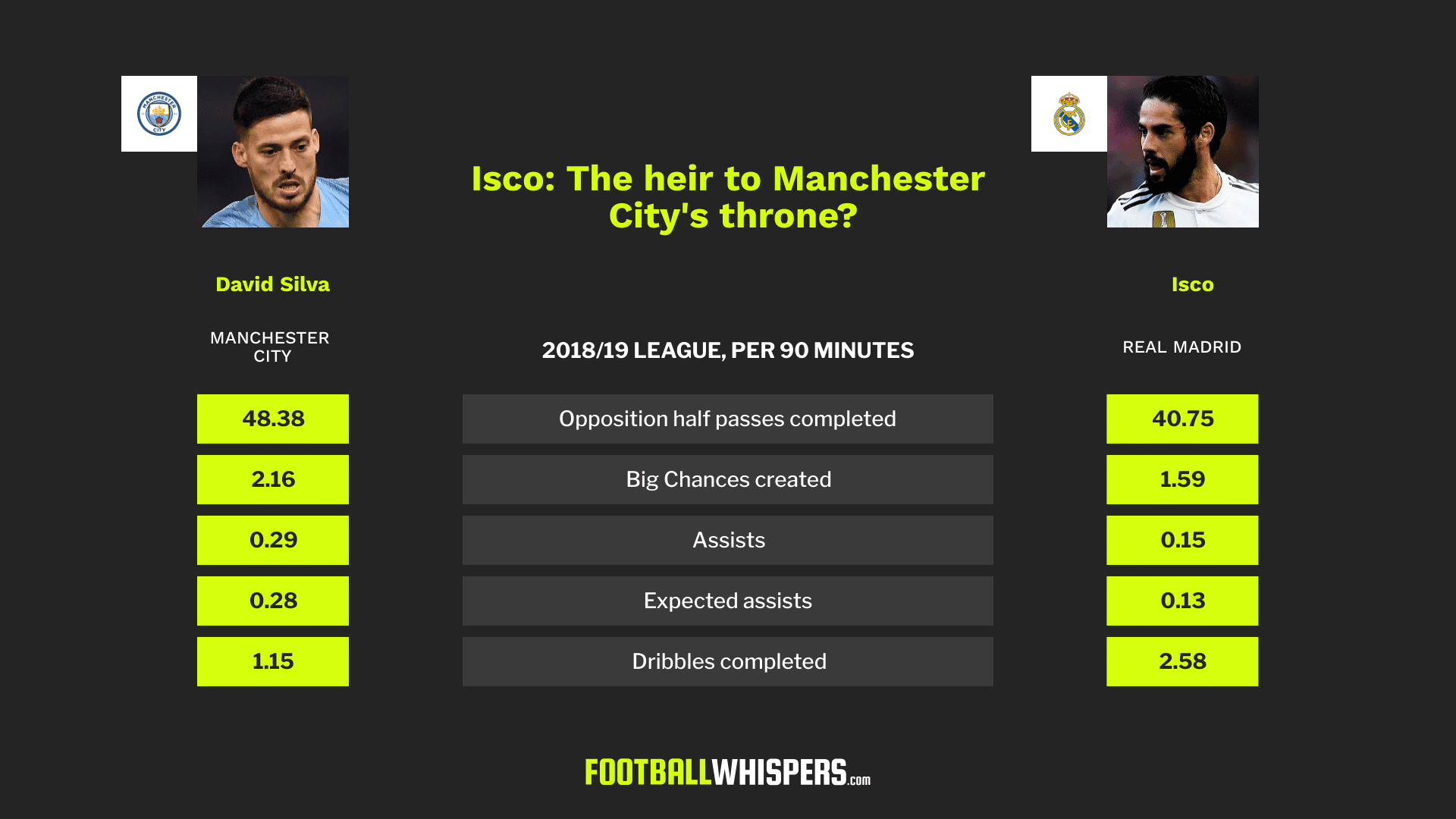 Silva also has the upper-hand on his compatriot when it comes to creating chances and this is borne out in his statistics for the 2018/19 Premier League campaign.

The Manchester City maestro created more big chances per 90 (2.16 vs. 1.59) and had a better return for assists (0.29 vs. 0.15). However, it's worth noting both players exceeded their expected assists score and while Isco played in 27 LaLiga games last season, only 11 came as starts. As a result, his statistics are drawn from almost 1,300 minutes fewer than Silva's.

One thing the Real Madrid man does have over Silva is versatility – and that is a boon when working under Guardiola. The former Barcelona coach used Andrés Iniesta, Cesc Fábregas and others on the left of the front three at Barça despite nominally being central midfielders. 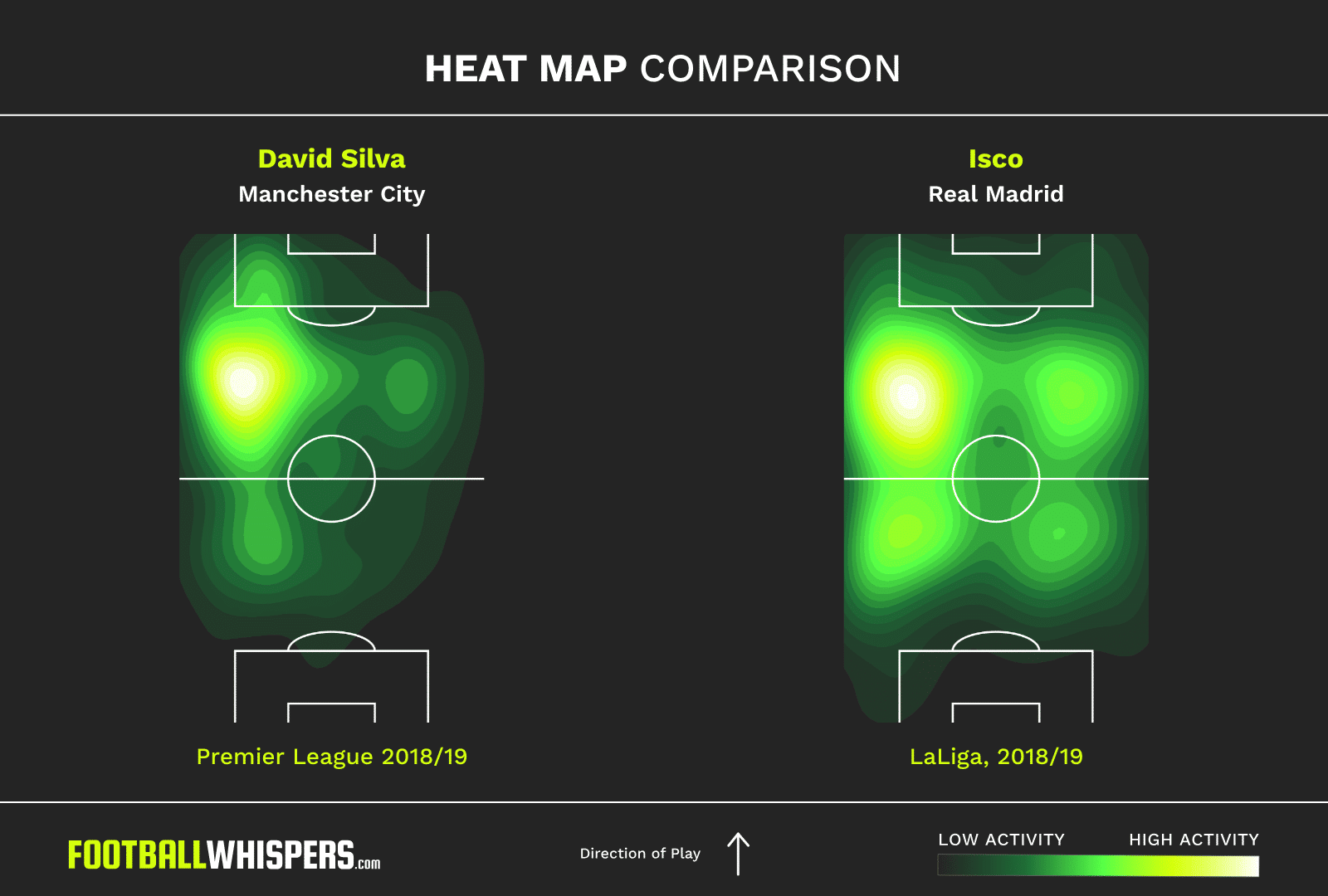 While the heat maps above show that a high concentration of both players' work took place on the left-hand side of central midfield, Isco's map shows a greater spread of activity across the midfield. That is because he played in multiple midfield roles, as a No.10 and as a wide attacker last term – something which would doubtless appeal to Guardiola.

With his vision, technique, ability to wriggle out of tight spaces and a range of effortless passing, Isco is every inch the heir to Silva's throne at Manchester City. The question remains, though, whether Guardiola will see El Mago's exit as the perfect chance to blood Phil Foden. Silva has anointed the Englishman as his successor.

“I’m sure he’s going to be a fantastic player,” said Silva. “He’s a very nice man and he will be a good replacement for me. 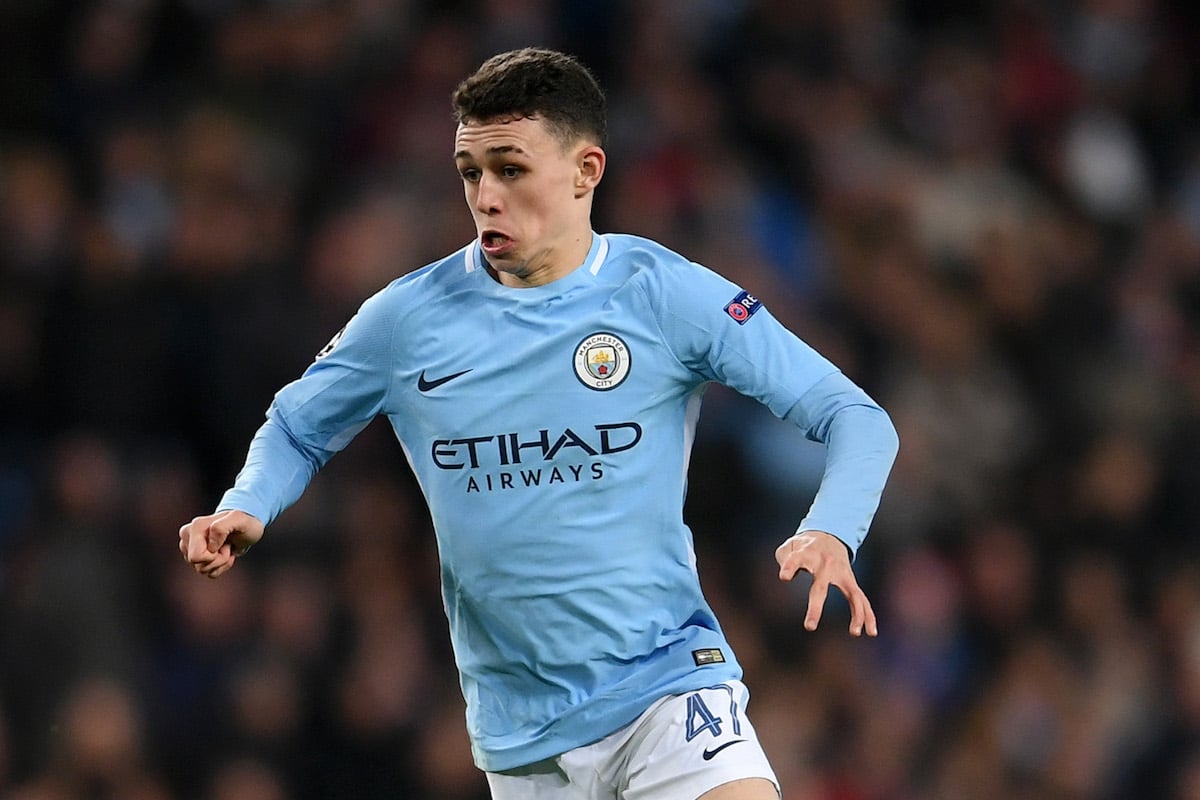 “Apart from his natural skills, he’s a very competitive person. He always wants to win and that makes a very good footballer. When you’re young, you always ask people with experience. I’ve given him lots of advice, like how to move on the pitch. He’s taken the information in and he’s getting better day by day.

“He reminds me of myself when I was young — especially how he is as a person. He’s very quiet but always there, competing. He hates losing. The best advice I can give him is always stay calm. Whatever happens in football, the highs and lows, always keep calm.”

Manchester City would do well to take heed of Silva's advice: keep calm, and find the best solution.