Manchester City have a problem.

Just 16 matches into the 2019/20 Premier League campaign and the reigning champions have already lost the same number of matches (four) as they did throughout the previous season.

Furthermore, they’ve also matched last year's tally of two draws. It means unless Pep Guardiola's side win all their remaining matches, they won’t be getting close to the 100-point mark this term.

It was somewhat inevitable, though. Guardiola’s side broke a Premier League record when they reached 100 points during the 2017/18 campaign. They showed it was no fluke by following that up with a 98-point haul in the top flight.

City were as close to perfect as the English top-flight has ever witnessed. But after achieving a 99-point average over the previous two seasons, the only real direction is down.

Injuries have hurt Guardiola's team but the club have invested heavily over recent seasons to be in a position to handle such a crisis.

In the defeat to Manchester United, for example, John Stones limped off and was replaced by a £30million centre-back. City also brought on Riyad Mahrez, a £60million signing from Leicester City, and İlkay Gündoğan, a £20million arrival from Borussia Dortmund.

On top of that, over £100million worth of talent remained seated on the bench.

City are without Sergio Agüero, Aymeric Laporte and Leroy Sané – players who would walk into most teams across Europe – but they’re probably one of the few clubs who have a squad, on paper at least, capable of covering such absences.

In fact, when looking at recent performances, many of the defeats have been because of the system and not individual errors. City’s defensive structure is an area of weakness, one opposition sides are exploiting.

City are currently without a clean sheet in six games in the Premier League and while Liverpool are also struggling to keep them this season, they tend to only give up one goal in a match.

City are conceding on multiple occasions. Since the 3-0 win over Aston Villa in their final outing of October, they’ve been breached ten times in just six games.

Liverpool hit them for three and both Newcastle and Manchester United scored twice. It’s easy to blame these disappointing results on the injuries, but it's how the goals were conceded that City should be of concern. 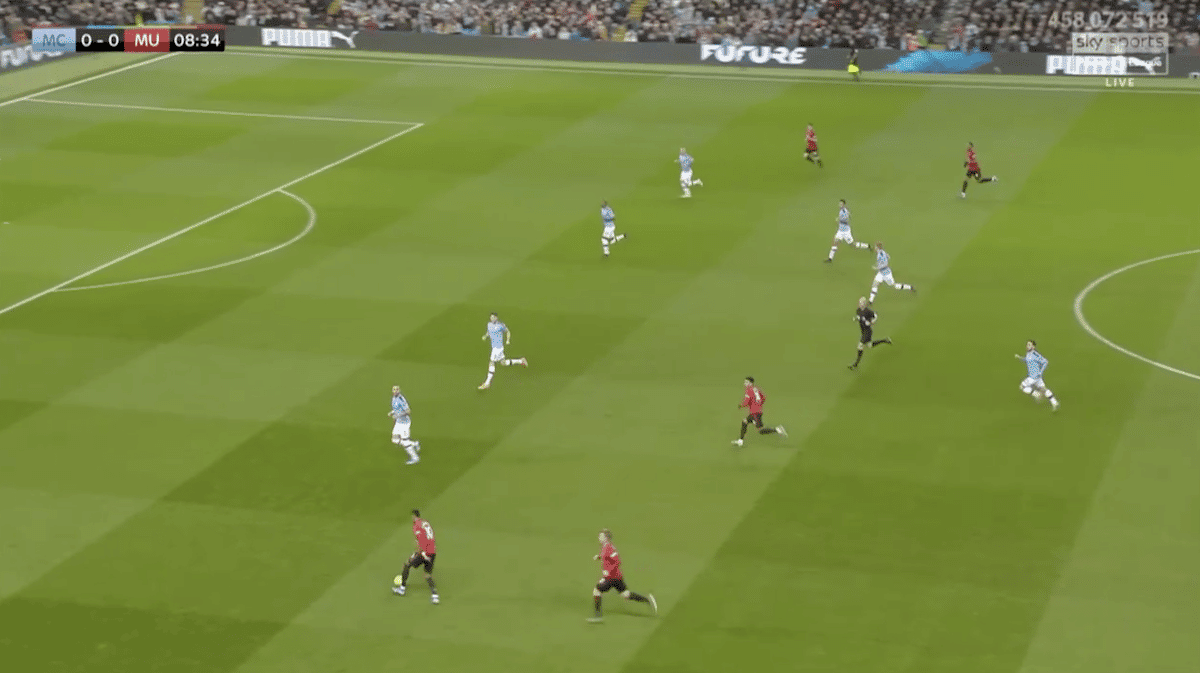 In the Manchester derby, United were aggressive early on. They committed bodies forward and attacked with energy. It's clear Ole Gunnar Solskjær had a plan and his players executed it.

In the still above, you see the away side breaking forward. In terms of reds vs blues, the latter outnumbers the former seven to five. But the positioning of the players nullifies the numerical advantage.

With Luke Shaw offering support to Marcus Rashford and Daniel James sharing the right flank with Anthony Martial, the City full-backs are overloaded on both sides.

The centre-backs are covering, sort of, but they aren't working as a unit. Instead, they appear to be operating in sets of two. 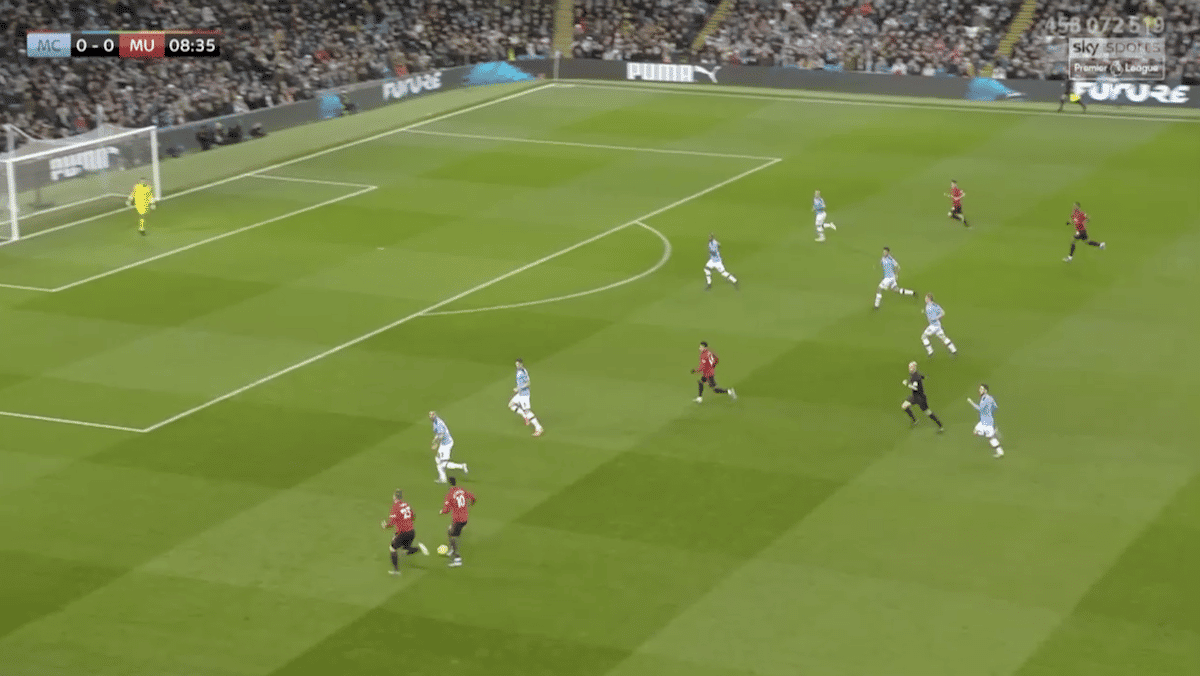 So while Stones is ensuring Kyle Walker has cover, Fernandinho is, for some reason, holding his position near Angelino, perhaps to deal with a potential switch. But this leads to a big space appearing between both centre-backs, one that Jesse Lingard exploits.

This move doesn't result in a goal but it highlights how easy it is to get at this City defence. And it's been a common theme in recent weeks. 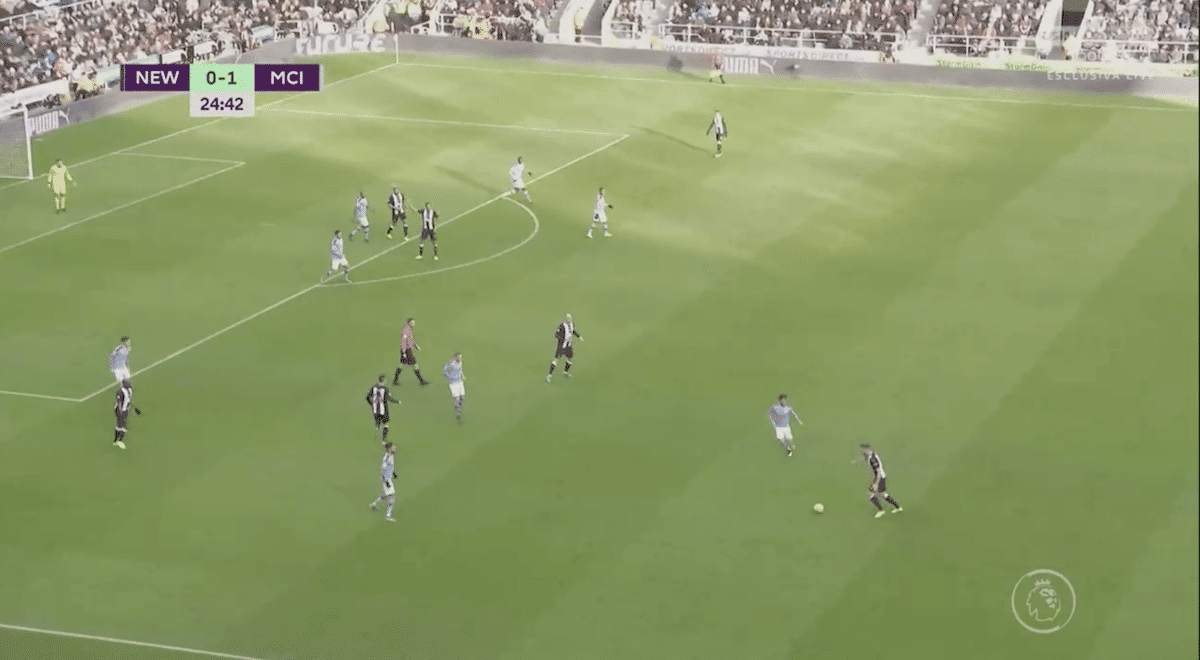 The screenshot above is taken from the build up to Newcastle's equaliser. In this instance, Gündoğan is positioned between the City centre-backs. The man on the ball isn't pressed quickly enough and the home side don't cut off passing lanes. 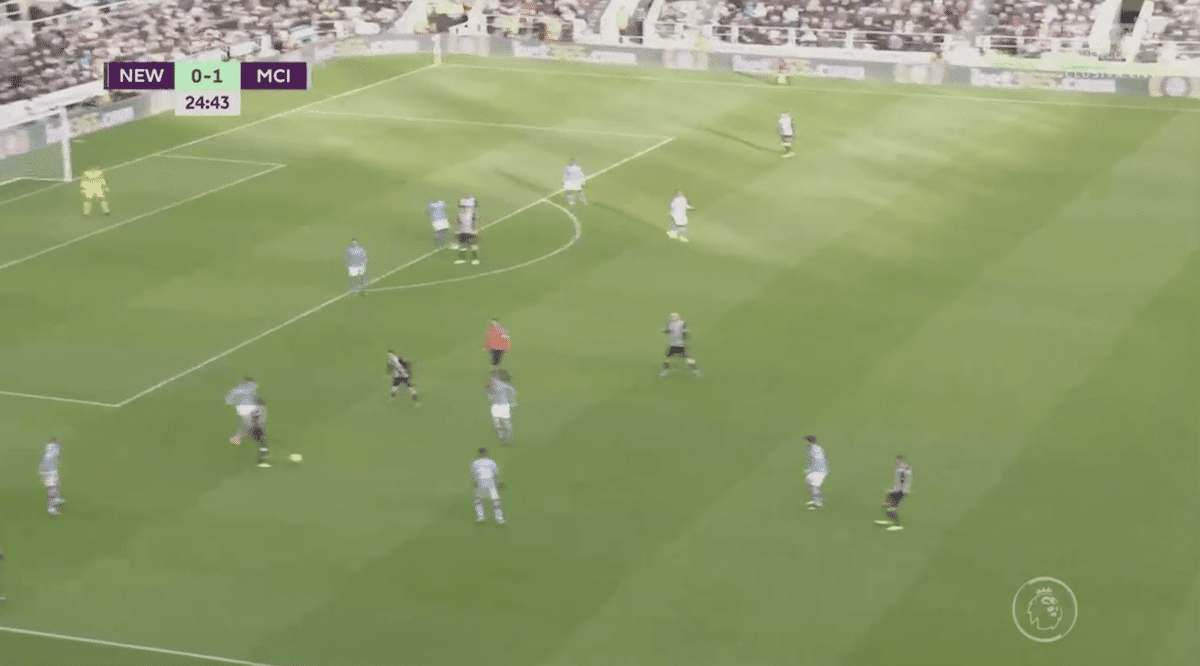 The ball is fired into Jetro Willems who manages to get a pass away to Miguel Almirón.

The former MLS star drives into the space vacated by Stones and forces Gündoğan to go with him. Willems sees the gap and drifts into a central area.

The finish from the left wing-back is unnervingly good but questions need to be asked.

Why is an opposition player able to waltz into the penalty area? Not only that, even if Willems doesn't reach the ball, why are Newcastle able to get another player unmarked nearby?

Steve Bruce's side literally had men lining up to shoot in City's box. 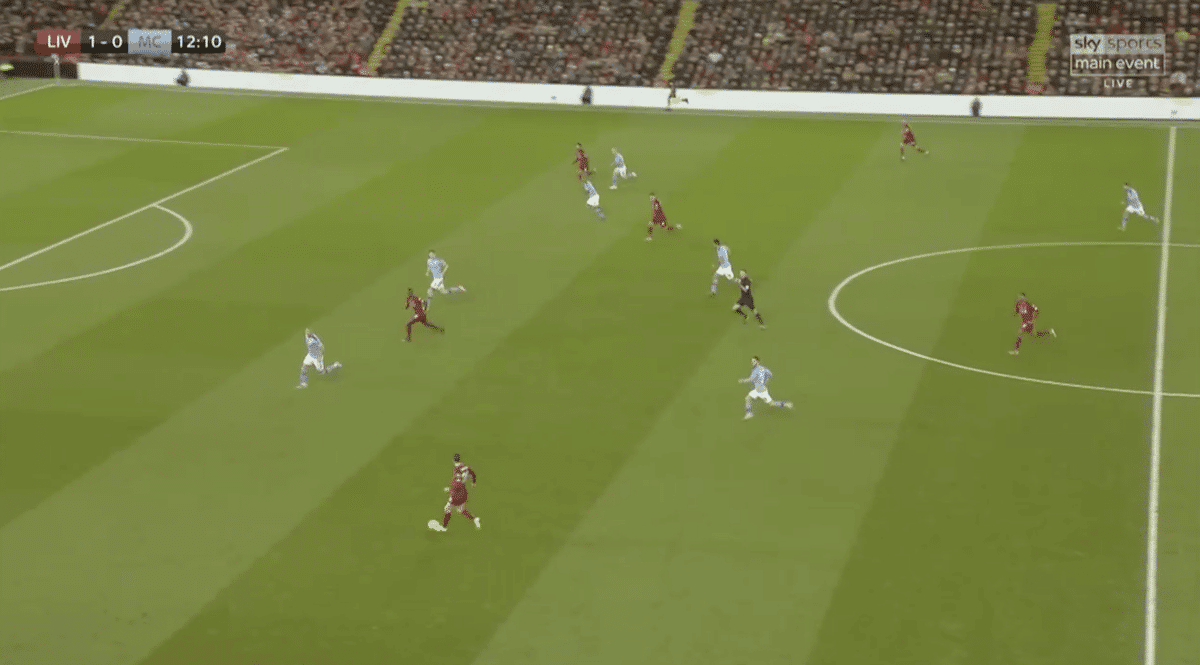 Mohamed Salah's header (below) was guided past Claudio Bravo and there wasn't much the away side could do to prevent the goal once the ball left Andrew Robertson's foot. But, again, the spacing between the centre-backs meant they never had any control of the situation.

Stones was covering Walker with Sadio Mané making a run in behind. But the space that created between Fernandinho and the England international was huge and Roberto Firmino recognised this and raced forward. 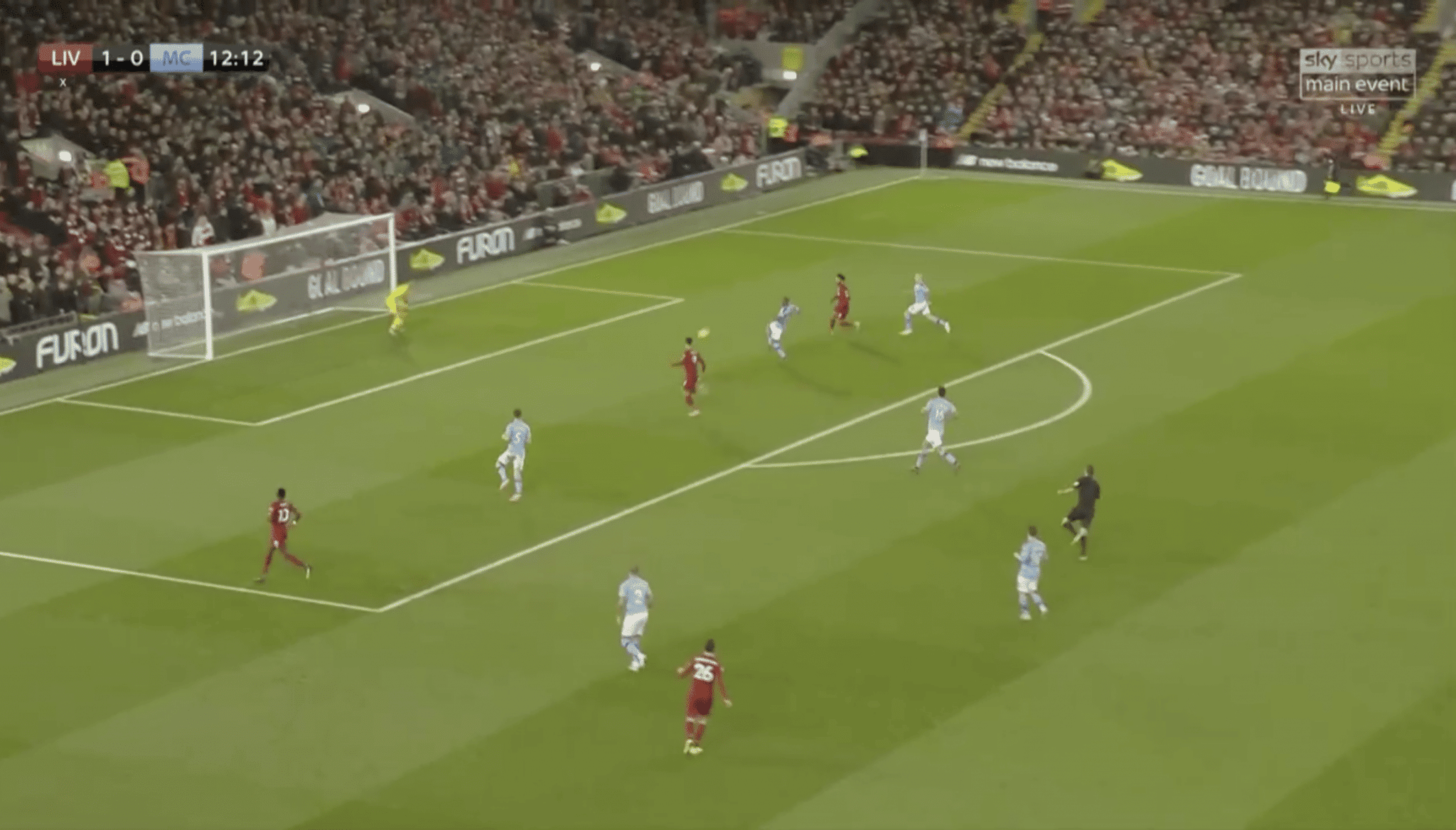 As the ball is whipped in it is three vs three in the box. But, more importantly, it's two vs two at the back post. Salah could have headed the ball back across goal for an unmarked Firmino to tap home.

Yes, some of these are counter-attacking goals. But in each of the examples used, City have numbers back. If organised properly, they should manage the situation much better.

Of course, Fernandinho isn't a centre-back by trade but Guardiola said the plan was always to use him there if required. He isn't Laporte but positioning, the issue at play here, is something you learn on the training field.

This is something that can be fixed without money being spent. Quite simply, Guardiola and his coaching staff need to go back to basics to reignite City's title charge.