When Benjamin Mendy arrived in England in 2017 it looked as though Manchester City had sorted their left-back spot for the best part of the next decade thanks to his swashbuckling displays.

Fast-forward almost two years and the Frenchman has managed just 14 Premier League starts thanks to a serious knee ligament injury. The French international has made a far greater impact as a social media influencer, something which has evidently irked Pep Guardiola.

And while the Catalan was prepared to wait for the former PSV Eindhoven, just 12 months after selling the Spaniard.

In the time that Mendy has been sidelined, Fabian Delph and Oleksandr Zinchenko have filled in admirably. The one-time forgotten man of the Etihad Stadium, Delph reinvented himself as a buccaneering left-back as Guardiola's side swept all before them en route to the title in 2018.

Last season it was the turn of Zinchenko, the Ukrainian midfielder making 14 Premier League starts with Mendy (9), Delph (8), Danilo (3) and Aymeric Laporte (3) all having brief stints at left-back. As things stand, Zinchenko will start next season with a realistic chance of being Guardiola's first-choice in the position.

Playing full-back in a Guardiola side is unlike playing the position for most other sides in European football. The Catalan tactician is famous for instructing his full-backs to fly forward and tuck inside, flooding the midfield and outnumbering their opponents. 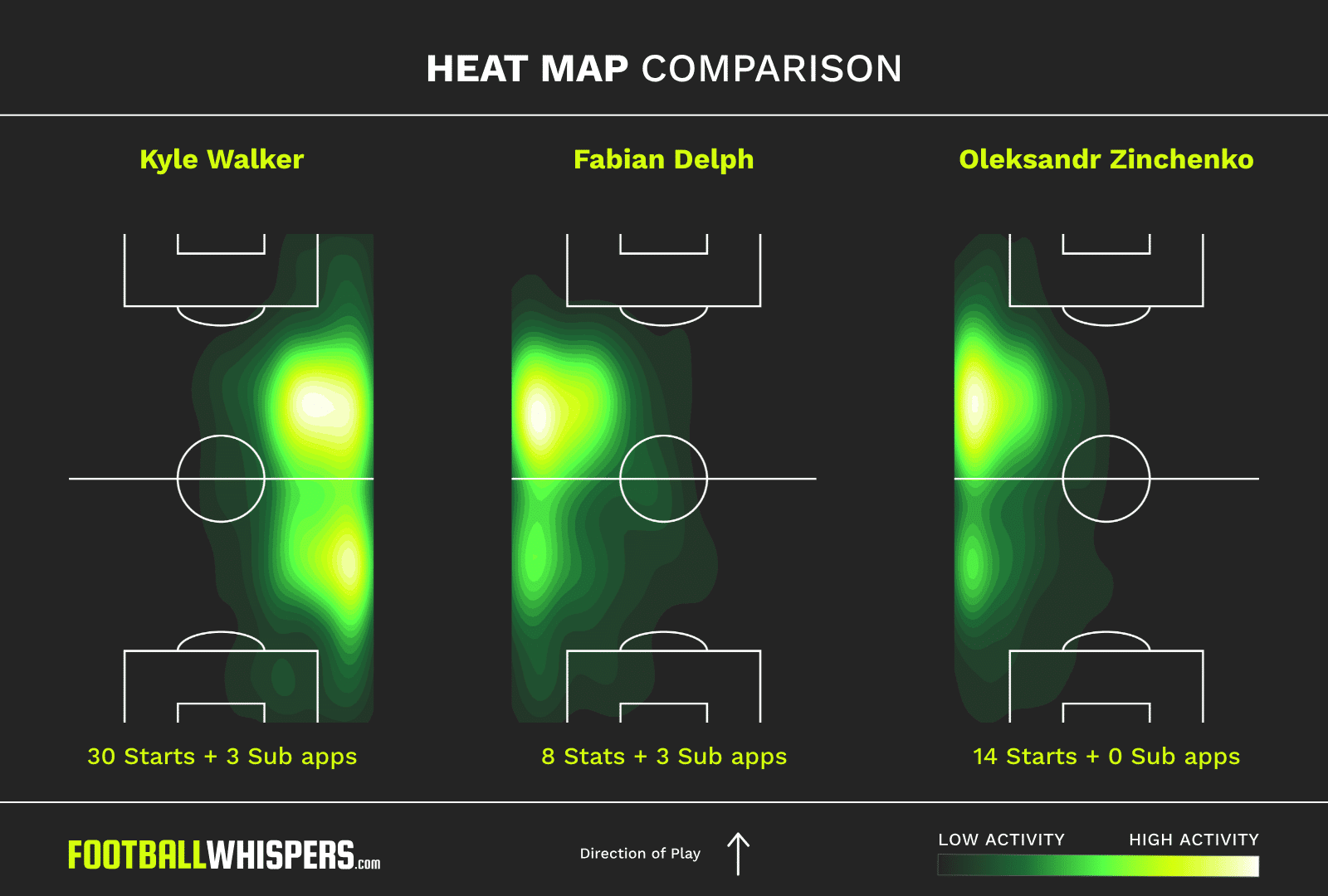 The graphic above – displaying the respective heatmaps for right-back Kyle Walker, Delph and Zinchenko – shows the majority of the work done by City's full-backs last season was in the opposition's half with Walker the only one of the three to be called upon regularly in City's half.

With that in mind, a move for the gung-ho Angeliño makes a lot of sense. Among Eredivisie full-backs last season, no-one recorded more assists (10), created more big chances (20) or completed more dribbles (49) than the Spanish Under-21 international.

It's evident from his style of play that Angeliño has been schooled in the City way of playing having moved to Manchester in 2013. After six years in Deportivo La Coruña's youth system, Angeliño was snapped up by the Citizens in 2013 amid reported interest from Spain's big two: Barcelona and Real Madrid. 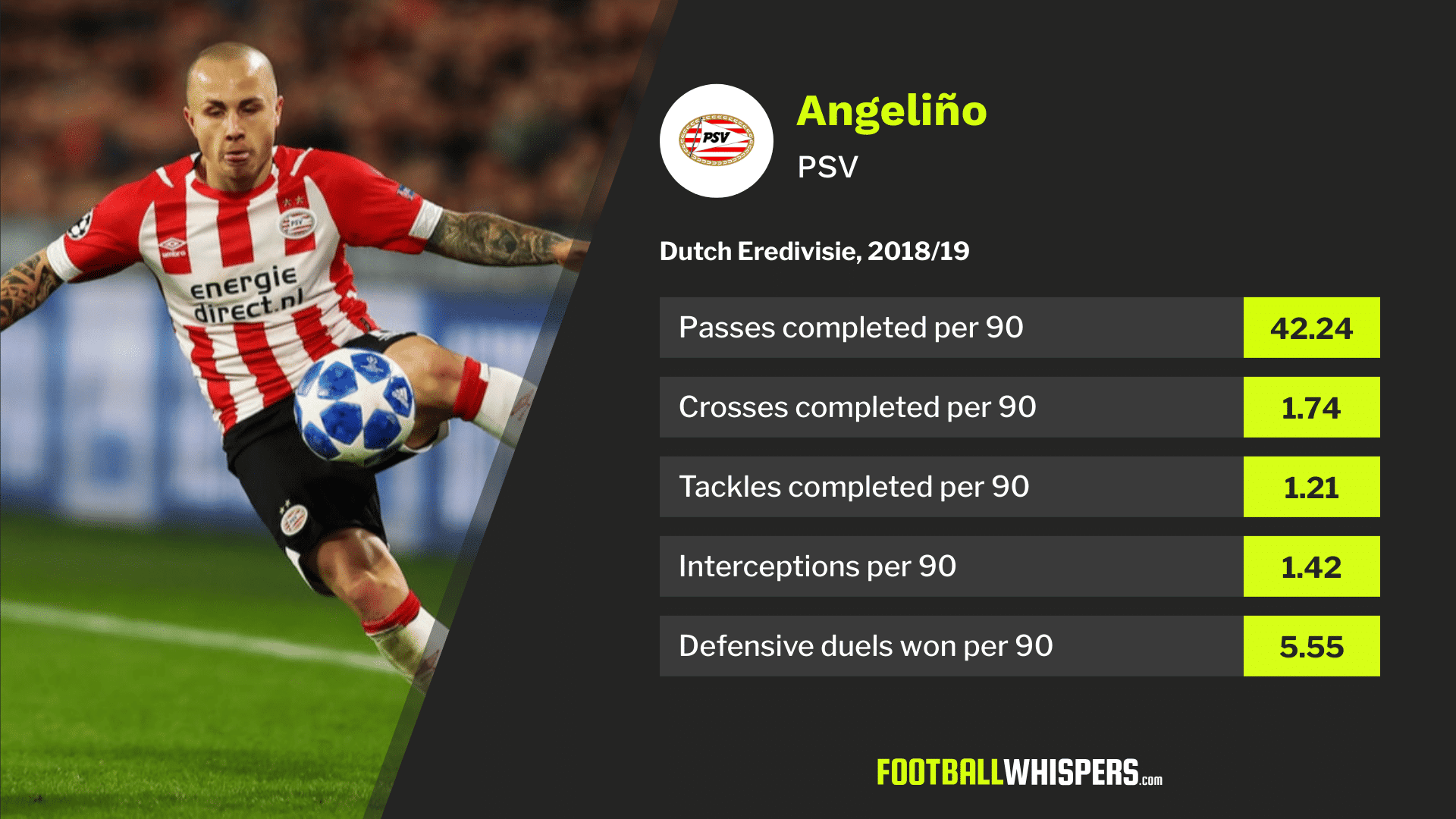 He made his first of three appearances in 2016, coming off the bench as a late substitute in an FA Cup win over Aston Villa, before appearing twice under Guardiola in the League Cup and a Champions League qualifier.

Loan moves to City Football Group-owned sides New York City FC and Girona brought differing degrees of success. After appearing regularly in Major League Soccer, Angeliño's time in Spain failed to yield a single outing and his stint was cut short, allowing him to link up with Mallorca on loan.

“I went from being with Pep to playing in the Segunda [División]… I didn’t really know where I was going,” he told Marca last year.

“My idea was not to go out [on loan] so many times, but I’m happy because those decisions have helped me now to be at a top team.”

As City went big on full-backs ahead of the 2017/18 season, signing Walker, Mendy and Danilo, it became apparent the Coristanco native was unlikely to get his chance at the Etihad Stadium and he joined Dutch side NAC Breda on loan.

It was with Breda that Angeliño first made good on his potential. He finished the season with 11 big chances created, 75 crosses completed, 57 dribbles completed, 32 set-piece key passes, two goals from direct free-kicks and three strikes from outside the penalty area. In each of those categories, he led the way among Eredivisie full-backs. 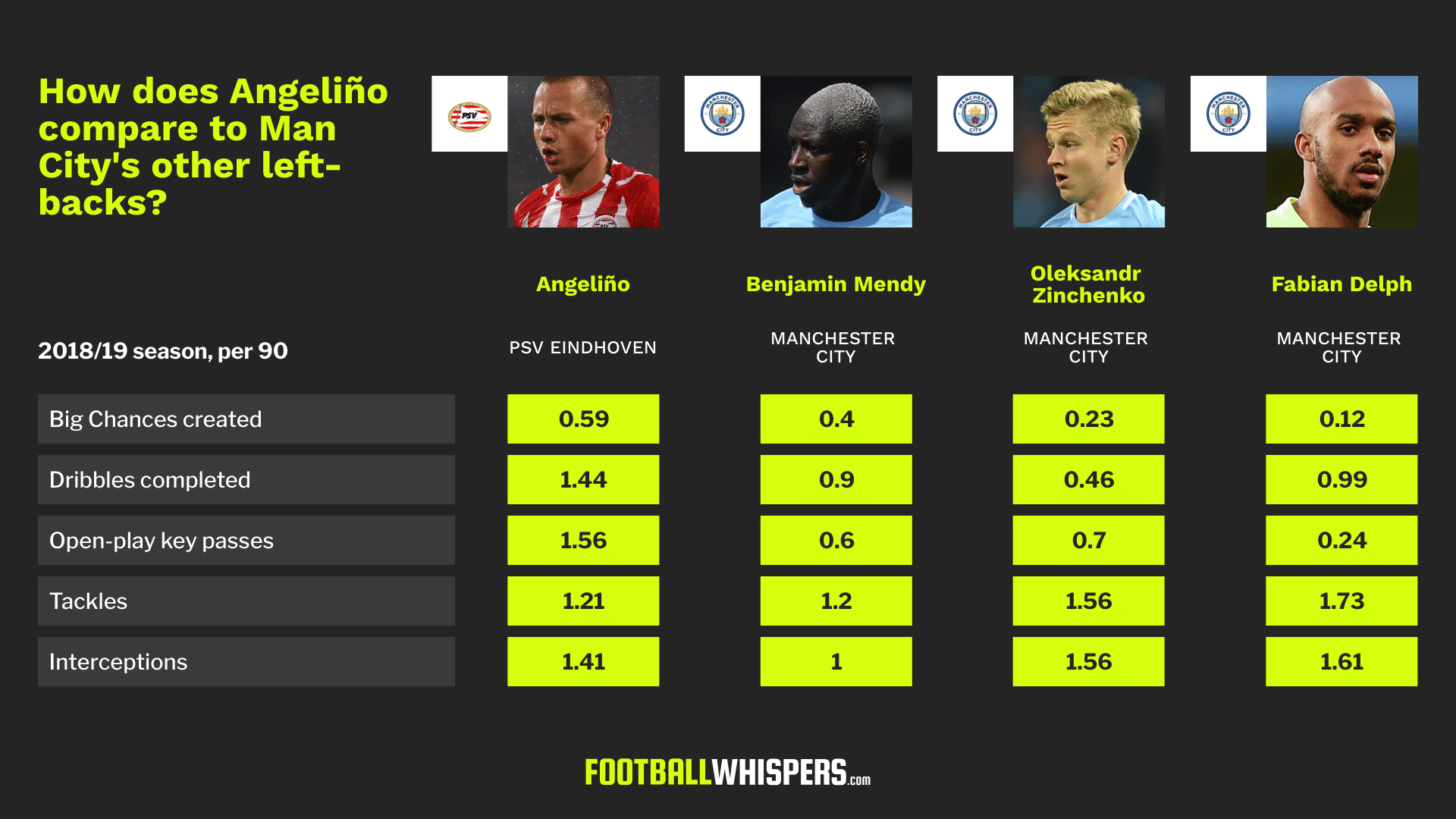 So how does Angeliño compare to City's current options at left-back? It's hard to read too much into Eredivisie players. The league has an infamously chequered history when it comes to Premier League exports. For every Ruud van Nistelrooy or Arjen Robben there's a Vincent Janssen or Afonso Alves.

However, the fact the Spaniard came out on top among his defensive peers for a number of important metrics while playing for a Breda side who finished 14th and then repeated it for second-placed PSV is a good sign.

Taken against Manchester City's rotating cast of left-back options, Angeliño fares well. No-one can top the 0.59 Big Chances he created per 90 minutes last season, nor can they better the 1.44 dribbles he completed – though that is because Guardiola's side emphasises passing the ball over carrying it. His 1.56 key passes per 90 dwarf Mendy (0.6), Zinchenko (0.7) and Delph (0.24) which might be the most attractive prospect for Guardiola.

Defensively he holds his own too, though at 5ft 7ins it is, unsurprisingly, his area for improvement. Zinchenko and Delph both completed more tackles and interceptions last season, which could mean the Spanish Under-21 international would be saved for fixtures against weaker opponents where he would be able to attack more readily.

With a buyback clause of just €6million (£5.35million), the deal seems a no-brainer for City. They need help at left-back and Angeliño, at 22, still has time to develop under a coach he describes as a ‘genius'.

Reflecting under his time under the former Barça and Bayern Munich boss, he said: “I did not play much, but the six months I was with Pep were a pleasure. You learn from a genius like him every day.”