Manchester City are shrewd operators in the transfer market. They identify targets suited to Pep Guardiola’s demands and act swiftly. If the transfer fee or the wage demands don’t align with what they envisaged originally then the deal is scrapped.

For the most part, the Premier League champions have got it spot on. They passed on opportunities to sign Alexis Sánchez and Fred, for example, with the only questionable call being the decision to not pay £75million to acquire the services of Virgil van Dijk.

However, Aymeric Laporte has shown he wasn’t a bad back-up choice.

Those in charge of recruitment at the Etihad clearly know what they’re doing. It’s why City fans shouldn’t be worried if they’re unable to get the signing of Rodri over the line. The Atlético Madrid midfielder has a £62million release clause in his current deal, a fee the Citizens are more than happy to pay.

But they aren’t the only ones.

According to reports, Bayern Munich are trying to convince the Spaniard that his future lies in Germany. And they too have the finances to put together a package that could tempt the former Villarreal man.

While Rodri does appear the true heir to Fernandinho as the holding midfielder for the treble winners, there are alternatives out there if the move doesn’t come to fruition.

Using the Football Whispers data lab, we've been able to highlight two players who tick a number of the same boxes as the Atleti midfielder. 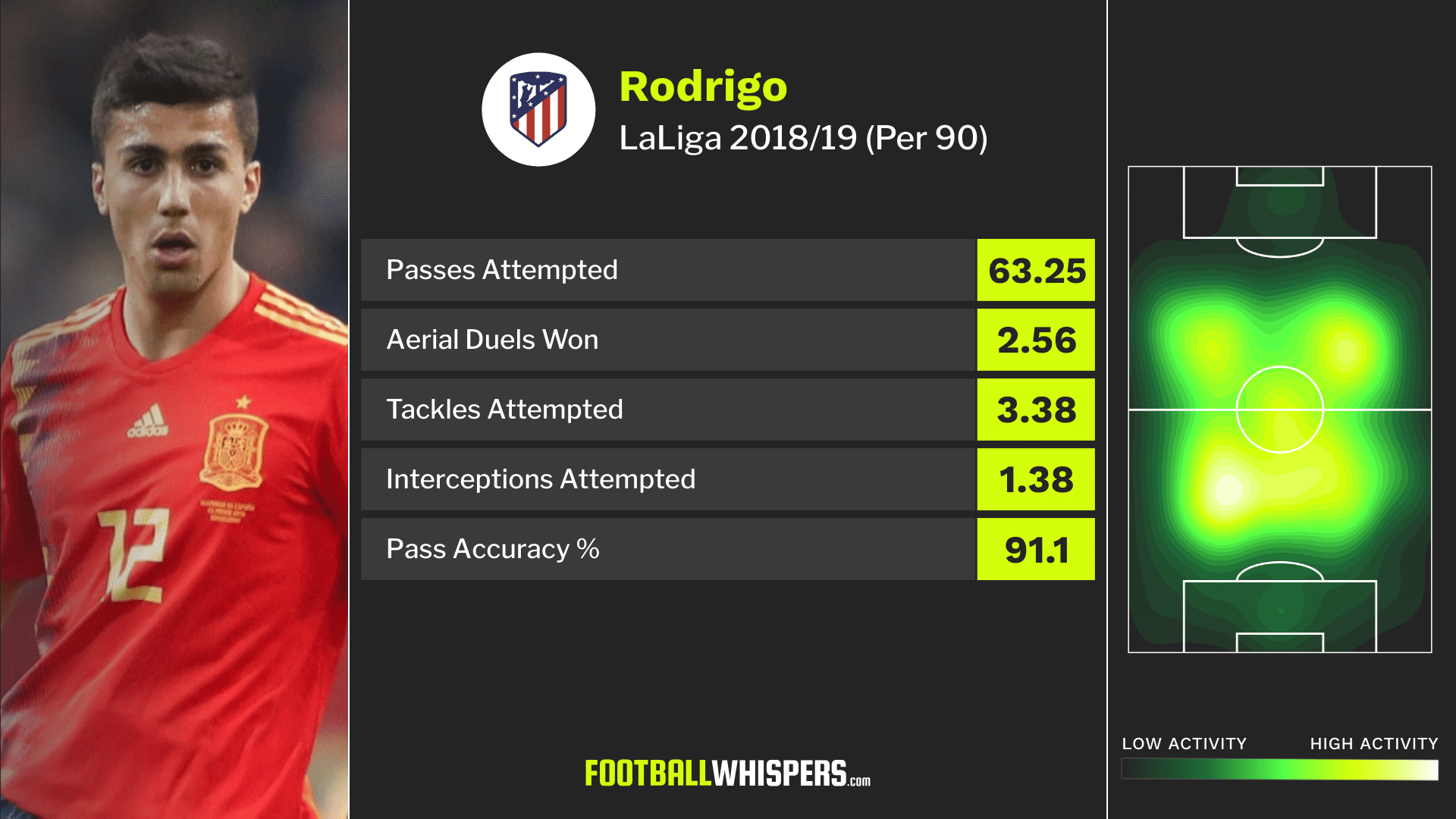 To find potential alternatives to the 22-year-old we cast out our net. The search criteria was fairly straightforward; the player had to be 23 or under and they needed to average a high number of passes on a per 90 basis with at least 87 per cent of those finding their intended target.

Tackles and interceptions were also a requirement along with either at least two aerial duels won or one dribble completed. It wasn't an extensive list, but two names did stand out.

The Lyon midfielder is one of the most highly-rated midfielders in Europe.

The 22-year-old made quite the impression when he faced off against City in the Champions League last term and his form resulted in a host of clubs battling it out for his signature. 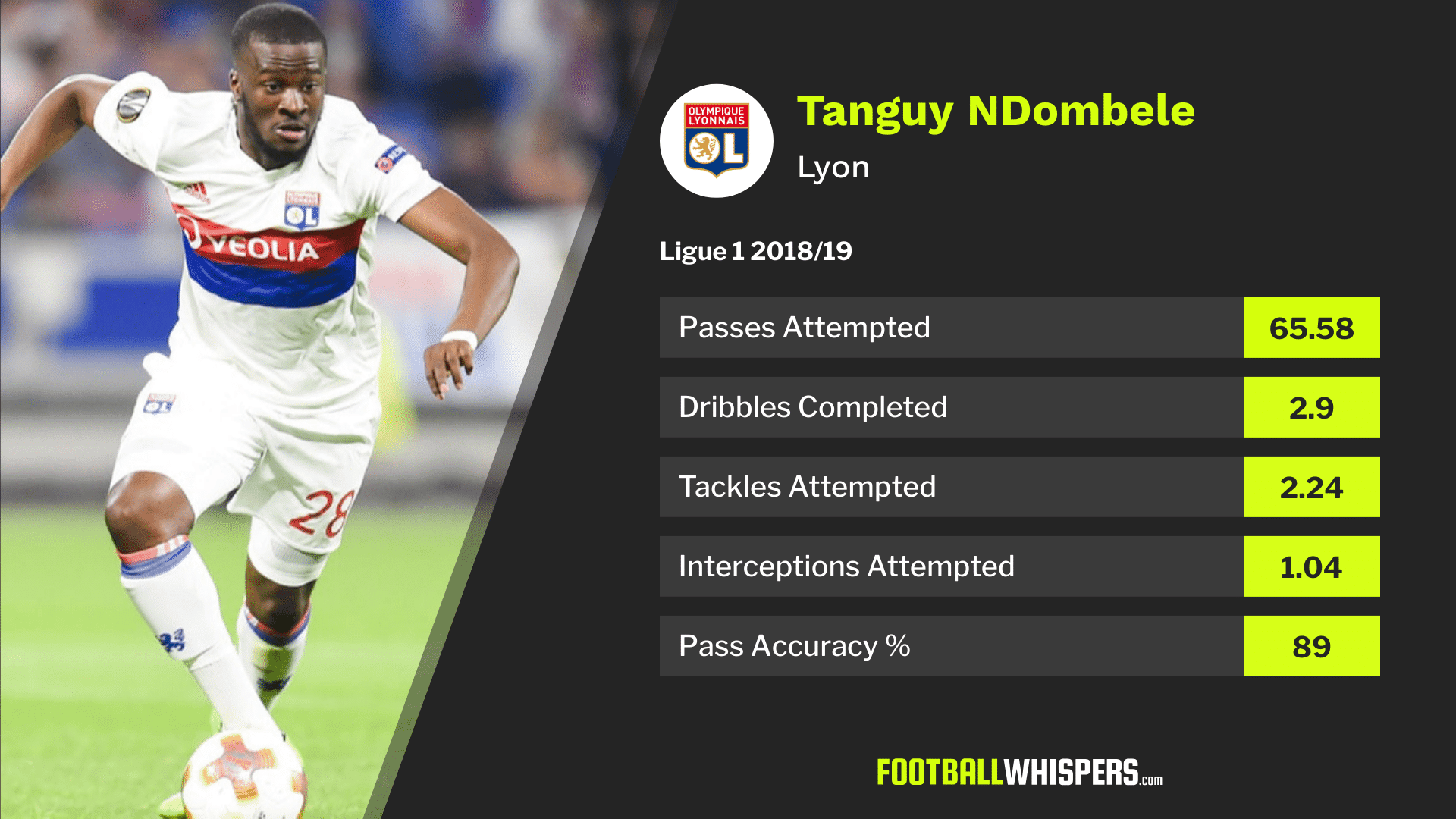 Manchester United are interested but its Tottenham Hotspur who are reportedly favourites to land him having agreed to pay the best part of £60million. Juventus are keen if they miss out on Paul Pogba, though.

Ndombele is not as dominant as Rodri defensively but he's just as assertive when in possession. The pair average a similar amount of passes on a per 90 basis and their passing accuracy is almost identical, too.

The Atlético man is busier, a byproduct of playing in a team that sits a little deeper and looks to absorb pressure, averaging over 1.1 more tackles and 0.34 more interceptions. He's also much more controlling in the air, winning 2.56 of his duels. But Ndombele makes up for the lack of aerial prowess with his press-resistant abilities.

He completes 2.9 dribbles on a per 90 basis, often carrying the ball from deep in midfield into the final third. He's the sort of player to unlock often durable defensive units, exactly the kind of team City come up against. The only question mark really is his height.

At 5ft 9ins he's not the tallest but Guardiola's men are rarely under the cosh so it shouldn't be that much of an issue.

This is something of a wildcard shout. Named as an Arsenal and AC Milan transfer target in January, Monaco sent Aït Bennasser on loan to AS Saint-Étienne for the latter half of the 2018/19 season.

The 22-year-old impressed but not enough to catapult his name into the mainstream. However, his numbers make for interesting reading and though he's not in the same league as a Rodri, yet, he has all the tools to be crafted into something special by Guardiola. 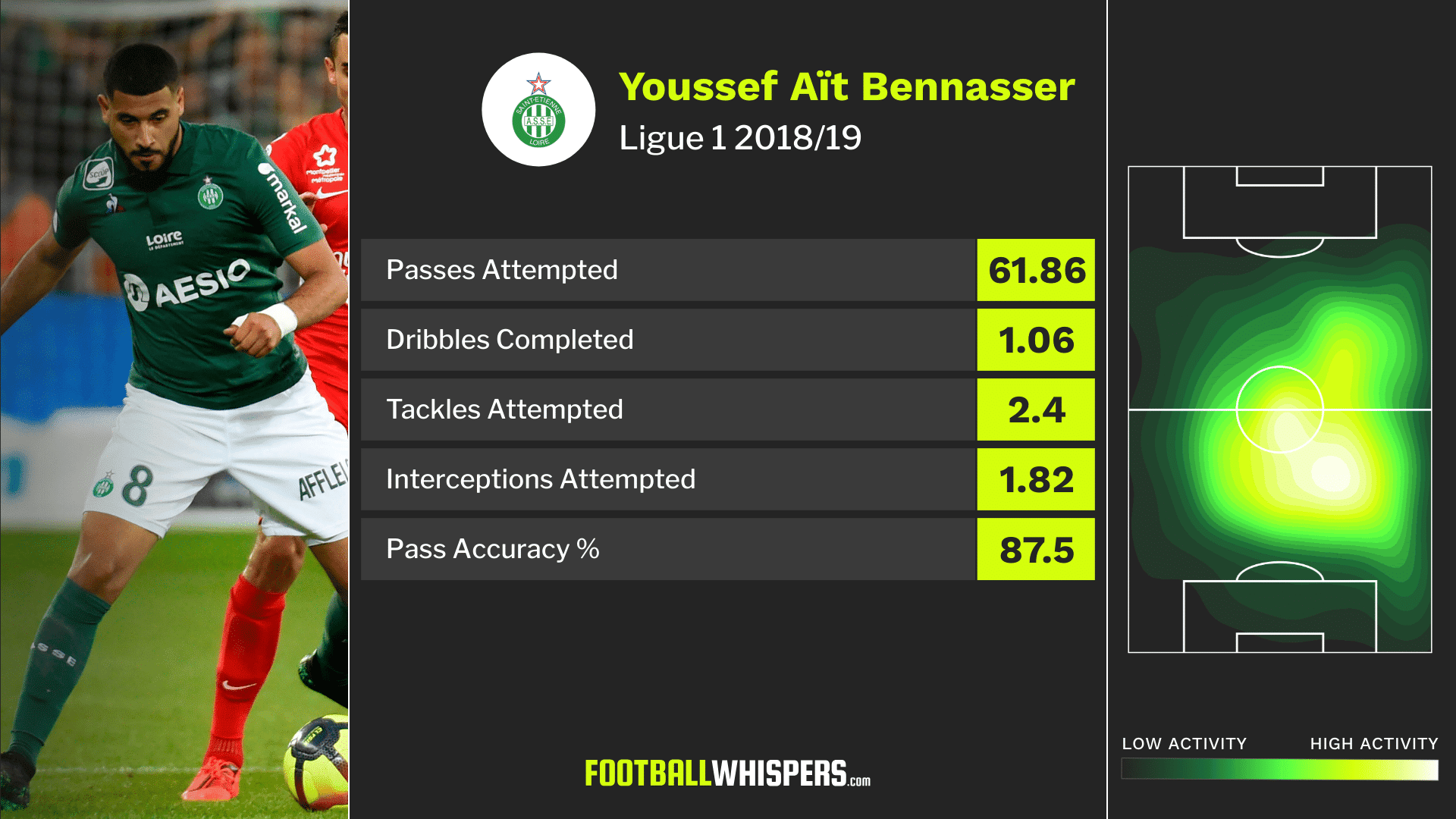 Aït Bennasser averaged over 60 passes with a success rate of 87.5 per cent. He's used to seeing a lot of the ball in the middle third and having to keep play ticking over.

He didn't challenge for many aerial duels, just 0.96 per 90, but he did win 50 per cent of those. Could he keep that average if he was competing for more on a game by game basis? Perhaps, with his 6ft 1ins frame being put to better use.

He completes over one dribble despite only averaging 1.46 per 90. And he gets about the pitch defensively, too, as highlighted by his tackles and interceptions.

He isn't a big name but functionality trumps reputation. He fits the profile. The sort of player to allow others to shine. It's exactly what City need from their holding midfielder.