Gabriel Jesus was supposed to be the long-term replacement for Sergio Agüero. At one stage it appeared as though the Brazilain youngster would bring the Manchester City legend’s career to a premature end with his performances.

So much so it left Pep Guardiola with a conundrum.

The former Palmeiras youngster looked unstoppable when he arrived in England in January 2017 and the writing looked on the wall for Aguero.

Guardiola even shoehorned the pair of them into the same XI at one stage as he did his best to keep the Argentine hitman happy.

But things have changed at the Etihad.

City retained the title, the first club to do so in a decade, and leading the line for them was Agüero. That’s been the story throughout this season with Jesus having to settle for a place on the bench.

And now, according to Portuguese newspaper A Bola, Guardiola is willing to sacrifice the Brazil international during the summer transfer window to finance a move for João Félix.

It may seem harsh on Jesus. Since his arrival in England, he's played 3,342 minutes in the Premier League and during that time the forward has averaged an incredible 0.73 goals per 90. 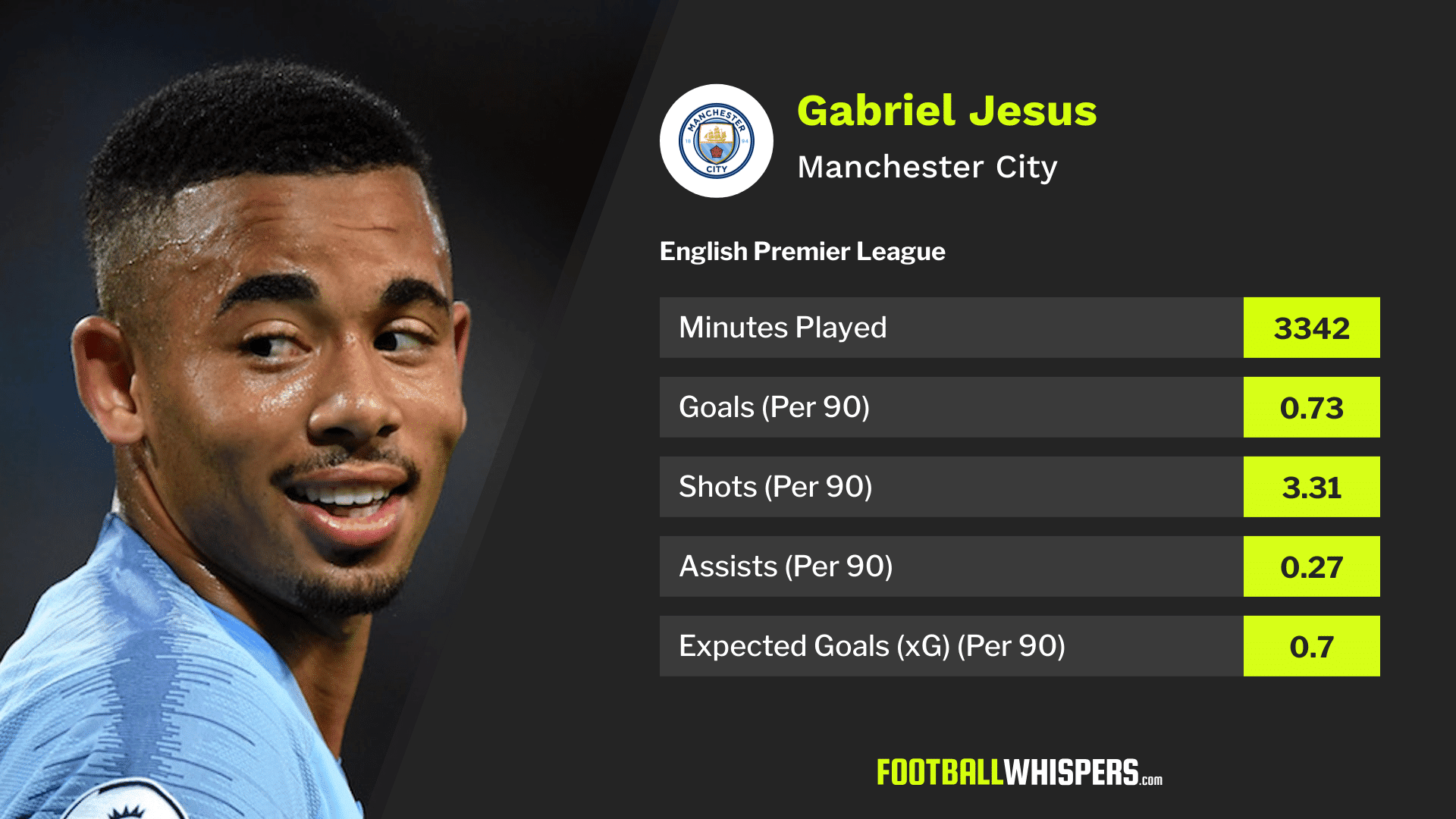 His output is sustainable, too, given his expected goals per 90 average during that time is 0.7. Jesus has also chipped in with an average of 0.27 assists. Over a 38 game season, those averages see him net 28 goals and finish with 10 assists, a total which would see him win the Golden Boot on most occasions.

However, it's more to do with reliability as opposed to form and the biggest takeaway from Jesus' stats is just how few minutes he's played. He's missed out due to injuries at times but for added context, Agüero has played 5,618 league minutes since the Brazilian made the move to the Etihad.

It means the Manchester City No.10 has played 2,276 more minutes, or roughly 25 full 90 minute matches more than the young pretender.

The need for a reliable successor to Agüero is clear. The soon to be 31-year-old can't be playing 45 games per season for much longer, not if he's to be as sharp as he is now.

Though Félix only burst onto the scene this season, he's shown already that he has that confidence about him. The sort that will see him thrive in the spotlight.

, but if City promise to make him the focal point of their foward line alongside Raheem Sterling, Leroy Sané and Bernardo Silva, it would be difficult to turn the Premier League champions down.

And looking at Félix's stats this season, he would be an upgrade on Jesus.

Granted, the Primeira Liga is no Premier League. It has been fiercely competitive this season with Porto and Benfica trading top spot throughout the year.

It means there's been no period for Bruno Lage to ease Félix in. And yet he's taken to the first-team like a duck to water, plundering goals against all those who come up against the current leaders.

He's appeared in more minutes than Jesus and has a better goals per game ratio this term, in fact, his average of 0.75 per 90 is just 0.01 below Agüero's.

He's not as precise as the Brazilian, only managing to register 40 per cent of his efforts on target compared to the 58 per cent the City No.33 managers. But an average of 40 per cent is better than most forwards, including Agüero.

It's likely he'd average more touches in the area if he moved to City given they're more dominant than Benfica are. The stats paint a picture of a readymade forward. But Félix is much more than that. Capable of playing as a wide forward as well as a No.10, he brings a flexibility to the team that Jesus simply cannot offer.

He can rotate with the current front three as well as playing alongside them in different variations. 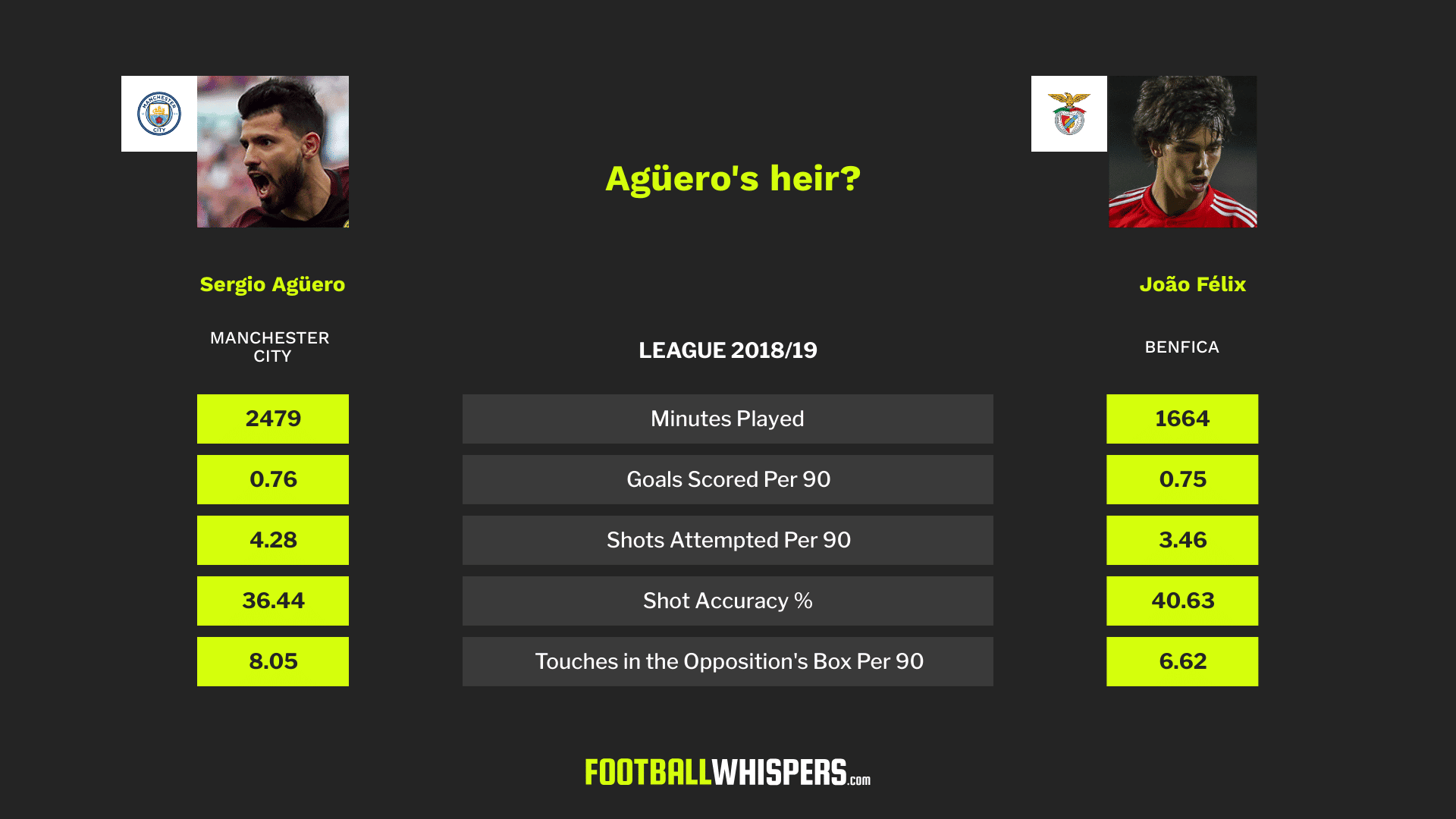 And just like the Man City legend, Félix is a clutch player. He scores in the big games when it matters most. This season he's netted in matches against Porto and Sporting.

He fired in a hat-trick during the 4-2 Europa League quarter-final first leg victory over Eintracht Frankfurt and he scored in the recent victory over Rio Ave as Benfica reclaimed top spot with just one game to play.

He could be the player many thought Jesus would be. Whatever the cost, he could well be worth it for a team like Man City. Finding an heir to Agüero was always going to be difficult. The emergence of Félix made that task a little bit easier.