Manchester City and Everton played out an entertaining 1-1 draw at the Etihad. Wayne Rooney – who else? –  opened the scoring by becoming just the second player to reach 200 Premier League goals before Raheem Sterling thrashed in a late equaliser with both sides seeing a man sent off.

City's Kyle Walker was dismissed for two bookable offences just before half-time with the Toffees already ahead thanks to Rooney's 200th top-flight strike.

The hosts piled on the pressure in search of an equaliser – despite being a man light – and were rewarded when Mason Holgate headed a ball straight back to the penalty spot where Sterling rifled the ball home.

Former Manchester United man Morgan Schneiderlin was sent off for a second yellow late on as City searched for a winner.

Here are five things we learned from a frantic game at the Etihad Stadium.

Agüero and Jesus can work together

There have been suggestions in the media that Pep Guardiola can't play both his strikers but there are signs a relationship is beginning to form between the pair.

It doesn't have to be one or the other. It can be both.

Gabriel Jesus and Sergio Agüero are both goalscorers. But unlike many others, they're much more well rounded. The Brazilian can operate in wide areas and take up withdrawn positions while the Argentine looks comfortable playing in a No. 10 role.

Jesus only lasted till half-time as Guardiola sacrificed him to tweak the system following Walker's dismissal.

It's by no means at the same level as Andy Cole and Dwight Yorke, Thierry Henry and Dennis Bergkamp or even Luis Suárez and Daniel Sturridge. But there are definitely signs a relationship could blossom and goals could be evenly split. Patience will be required though.

Everton shocked many with their starting XI. Rooney was once a formidable striker but is now much more of a creator while Dominic Calvert-Lewin has the tools to be a Premier League striker but is still some way off fulfilling that potential. For now the 20-year-old is a wide forward.

Yet that was the duo Ronald Koeman selected in attack tonight with Sandro Ramírez not fit enough to start. It highlights just how light they are in this department and why, despite spending more than £150million in the transfer market this summer, they need to delve back in.

That is if they are to compete on all fronts this season. Olivier Giroud was reportedly an Everton transfer target and the Toffees have been tentatively linked with a move for former Liverpool striker Christian Benteke. Clearly Koeman knows it is an area in need of improvement. 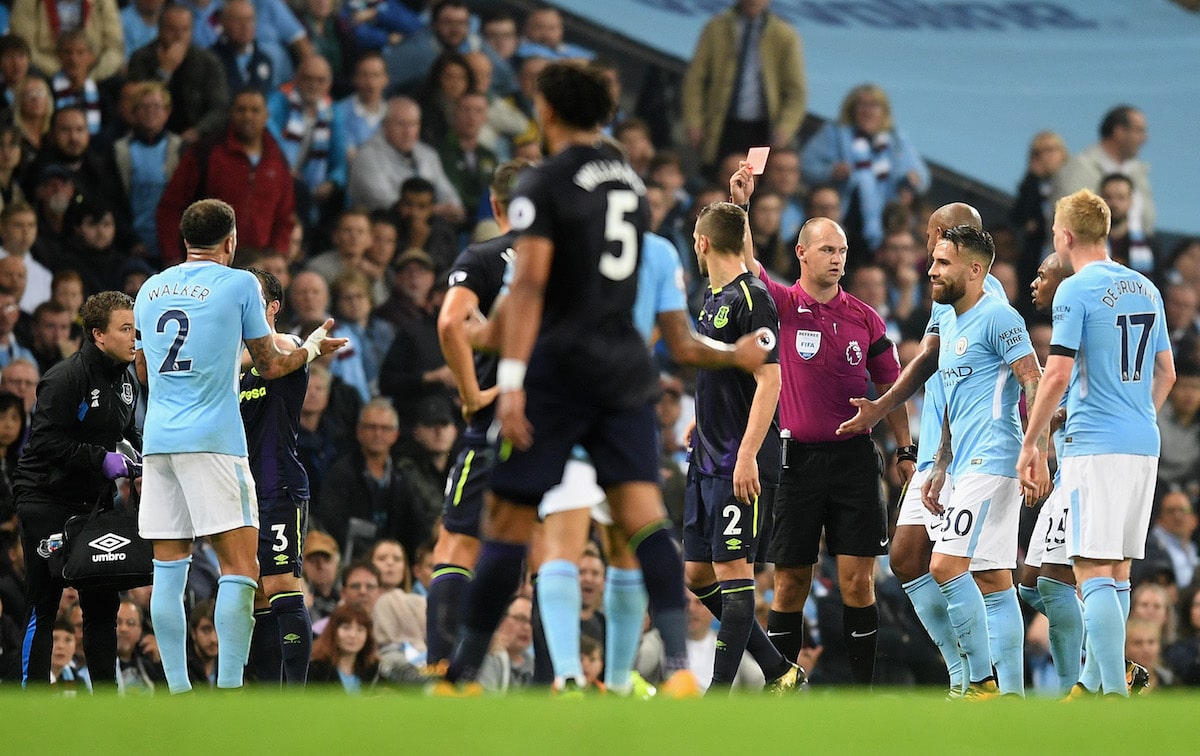 When the line-ups were announced it didn't make pretty reading for Everton fans. Koeman named five defenders and five midfielders in his starting XI and it appeared he wanted to stifle and nullify City in the hope of a draw.

It left plenty scratching their heads.

However, as the game progressed it was clear the former Southampton manager was a man with a plan. He tasked Schneiderlin and Idrissa Gueye with man-marking Kevin de Bruyne and David Silva. Wherever the playmakers went, Koeman made sure his defensive midfielders went there too.

Ashley Williams, playing at the centre of a three-man defence, would step out and push into a midfield area when Schneiderlin and Gueye were in wide areas.

Koeman then used Tom Davies in a more advanced role in an attempt to make the most of his energy. Alongside Rooney, he was given the job of supporting Calvert-Lewin in attack and breaking into the penalty area. It was brave on Koeman's part but Guardiola's men could not stop it.

Everton played on the counter attack but, with the exception of Calvert-Lewin, they lacked any pace in their side. Ademola Lookman joins him as the only other real speedster in their squad.

Furthermore, they aren't missing any players with pace. Sandro is by no means slow but he's not blessed with blistering speed. Gylfi Sigurðsson offers a lot of things but pace isn't one of them and it's a similar story with Davy Klaassen.

Despite this, though, Everton looked a threat playing on the break. Add more pace to this side and it could be a system they use away to the big teams who look to dominate the ball and leave space in behind.

It could be a way to go, especially if they bring in a target man and play off of him.

Guardiola is still yet to find a perfect system

City can look brilliant at times. The way they manipulate the ball and the space makes them the team to watch. But it's yet to really click for Guardiola since his arrival in England.

They always seem to be missing that something. At times it can look like there are too many cooks in the kitchen.

Bernardo Silva was brought on after 70 minutes and stepped on the toes of his namesake David and de Bruyne.

The Portuguese international is brilliant at what he does, as he showed during his time at Monaco.

But you can't help but feel he was signed as a replacement for David, and that both shouldn't really be on the pitch at the same time for sustained period.

They're arguably too similar and both want to occupy the same space.

City might have been better off targeting a Dele Alli-type player this summer. A midfielder who offers something different to what they currently have at their disposal.

A goal threat and a driving force; essentially someone who can finish off the pretty patterns of play as opposed to wanting to add their own artistic touch to it in the build up.