Man Utd's focus returns to the Premier League this weekend after being involved in midweek Champions League action. The hosts have plenty of motivation for the 3pts as a win would allow the Red Devils to put pressure on 3rd-placed Chelsea who take on Liverpool in the League Cup final on Sunday. Watford lost heavily in midweek and Roy Hodgson must return to the drawing board ahead of a tricky trip to Old Trafford.

Man Utd certainly owe Watford one after the Hornets smashed the Red Devils 4-1 at Vicarage Road. Manchester United have won five of their last seven encounters with Watford and both teams have scored in three of the pair's last six meetings. Both teams have also scored in five of Man Utd's last six outings and Rangnick's men haven't lost any matches during that period.

Ronaldo joint-top scores for Man Utd this season alongside fellow countryman Fernandes, both of whom have netted 9-goals in the Premier League. The 37-year-old footballing legend hasn't been at his most prolific of late with just 2-goals in his last ten appearances across all competitions but Watford have a very generous defence and we fully expect Ronaldo to score against them this weekend.

Everything you need to know about Man Utd vs Watford

Man Utd looking to put pressure on Chelsea with a win

Man Utd were in the Spanish capital in midweek taking on Atletico Madrid in the Champions League. The hosts took an early lead through a Felix diving header that went in off the post and in truth, Atletico should have added to their tally. However, a quick counter-attack in the 80th-minute saw substitute Elanga equalise for Man Utd after being slotted through by Bruno Fernandes to make it 1-1. Atletico hit the goal frame for the third time late on but United held on to claim a 1-1 draw.

Watford would have had plenty of confidence following that 1-0 win at Villa Park, not that you would have known in their display at home to Crystal Palace in midweek. The Eagles controlled the game and went in 2-1 up at the break, scoring a further two goals in the second half to make the final scoreline 4-1. Hodgson looked like he was starting to get the Watford players into a stronger defensive outfit only to concede 4-goals at home to mid-table Palace.

Man Utd: McTominay is a doubt through illness, while Cavani has been ruled out due to injury.

Watford: Nkoulou, Kucka, Pedro and Etebo are all doubts for the trip to Old Trafford. 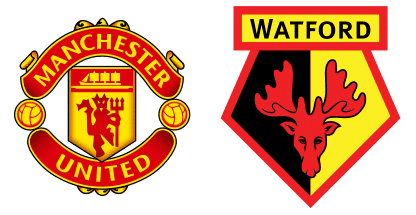