Jose Mourinho's Tottenham make the trip to his former club Manchester United for the most anticipated Premier League game of the weekend.

Here are three of our top tips for Sunday's clash at Old Trafford accompanied by all of the latest odds from only the top bookmakers.

All of the betting odds we provide are subject to change, especially as we like to publish our predictions 2-3 days before kick-off. In order to get the best odds, we advise you to check with your bookmaker before placing a bet.

Can Rashford Lead Man Utd to Glory Against Spurs Once Again? 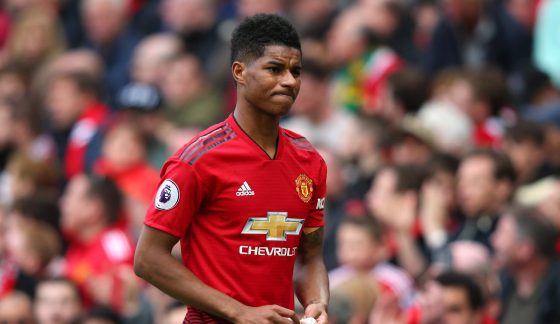 Man Utd sit a point behind Tottenham heading into this weekend's latest round of fixtures in the Premier League but have played one game fewer. Last time out, Man Utd left it late but did eventually secure their first league win of the campaign. Brighton looked to have salvaged a point when March netted 4-minutes into stoppage time. However, Man Utd were awarded a last-gasp penalty in the 100th minute, which Fernandes dispatched to secure a 3-2 win for the visitors.

Despite taking the lead at home against Newcastle at the weekend, Spurs were held to a disappointing 1-1 draw. Moura was setup by Kane in the 25th-minute to put the hosts in front, and that goal looked to have been enough for Mourinho's men to secure all 3pts. However, deep into stoppage-time, Newcastle were awarded a penalty, which Wilson converted to earn the Magpies a share of the spoils at the Tottenham Hotspur Stadium.

Spurs head into this weekends' clash as the form favourites with three wins from their last five outings in all competitions. The visitors are unbeaten in their last four games since losing their first Premier League game of the campaign against Everton. Man Utd have won their last two games following the 3-1 defeat by Crystal Palace, 3-0 away at Luton in the League Cup and 3-2 away at Brighton in the Premier League.

Man Utd have scored 8-goals in their last five matches and have only kept one clean sheet, while Spurs have scored 11-goals and kept no clean sheets during that same period. Son has scored five of 11-goals for Tottenham but looks unlikely to feature for the visitors this weekend due to injury.

Man Utd have won four of their last six matches against Tottenham, but two of those victories have arrived in cup competitions. Marcus Rashford has inspired Man Utd's last two league wins over Spurs and will be hoping to extend his good recent record against the Londoners on Sunday. Jose Mourinho will be aiming to end his former club's four-game unbeaten run against Spurs in all competitions this weekend.

The hosts have only dropped points in one of their last seven home games against Tottenham, a 3-0 defeat in August 2018. Three of Man Utd's last four wins against the Londoners have seen both teams score and over 2.5 goals, and each have ended in the same 2-1 scoreline. The visitors have only won one of their last six games against Man Utd in all competitions and could struggle again on Sunday with top scorer Son ruled out.

The hosts will be without Axel Tuanzebe (foot), goalkeeper Sergio Romero (not specified), and defender Phil Jones (knee) for the visit of Spurs on Sunday.

Gareth Bale (knee) won't feature this weekend, while Moussa Sissoko's (illness) chances of playing against Man Utd are rated at 50/50. Defender Japhet Tanganga (thigh) and forward Heung-Min Son (thigh) will also miss out, much to the disappointment of manager Jose Mourinho.

Both teams are in League Cup action in midweek, so be sure to check for further team news on Thursday morning.

Our Best Price Betting Tips for Man Utd vs Tottenham

Our predictions are always free and have been researched by an experienced tipster. We have provided our top three tips for the Man Utd vs Tottenham Premier League clash, and, as always, our betting tips are accompanied by the very best odds available.

The Red Devils have won four of their last six encounters with Tottenham and are currently unbeaten against the London club since August 2018. Man Utd have a great home record against Spurs, picking up six wins from the duo's last seven clashes at Old Trafford. Last season Man Utd only lost two of their 19 home games in the Premier League, while Spurs only managed to win four times on the road and lost seven times on their travels.

Over 2.5 goals have been produced in four of the last six meetings between these two clubs in all competitions, and four of those six games have seen both teams score. Man Utd haven't kept a clean sheet in each of their last three home games against Spurs, which will be a concern on Sunday. Three of the Red Devil's last four competitive matches have seen both teams score and over 2.5 goals, and the same can be said for three of Tottenham's last four outings.

England and Man Utd forward, Marcus Rashford, has scored three goals in his last three competitive matches against Tottenham. Those goals against Spurs have twice lead to victories for the Red Devils and having scored in Man Utd's 3-2 win over Brighton, Rashford is up and running for the new season. During the last campaign, Rashford had his best goalscoring season in the famous red shirt, netting 17-goals in 31 Premier League appearances.

Gala Bingo app: Download to your iOS or Android device

Hollywoodbets Review: All you need to know about a great South African sportsbook

Best Football Betting Apps: What is the top app in the UK for Oct 2021?