With 12 months remaining on his Arsenal contract, it seems as though Chilean forward Alexis Sánchez is destined to exit the Emirates Stadium this summer, with Manchester City and Bayern Munich both making him their top summer transfer target.

Coming off the back of the most productive season of his career, the 28-year-old is in the form of his life; it's no wonder he is in high demand.

A switch to City would certainly appeal for the fact that it would give the player the chance to reunite with Pep Guardiola, having worked under the Catalan tactician at Barcelona, while international colleague Arturo Vidal has been championing a move to the Bundesliga giants.

But with Manchester United still in search of a marquee attacking arrival, and with manager José Mourinho reportedly growing frustrated at the club's lack of transfer activity, the Red Devils would be wise to rival their cross-city neighbours' bid for Sánchez.

United were hoping to sign Antoine Griezmann from Atlético Madrid this summer, with the 20-time champions of England willing to fork out up to £86million to secure the 26-year-old forward. But, when the Court of Arbitration for Sport (CAS) decided to uphold the Spanish side's transfer ban, the deal fell through as the Frenchman was unwilling to leave the club when they would not be able to replace him.

Griezmann was earmarked as the Red Devils' marquee summer signing, following on from their acquisition of France national team colleague Paul Pogba a year ago. The collapse of the deal has left United's transfer plans in disarray; clearly in need of attacking reinforcements after being outscored by Bournemouth in the Premier League last season, Mourinho has been forced to identify alternative targets.

It appears that the Portuguese coach views Real Madrid's Álvaro Morata as the man to replace Zlatan Ibrahimović in the main striker's position, with a deal thought to be close to completion.

However, a new winger is also believed to be on Mourinho's agenda – Inter Milan's Ivan Perišic is United's top target for the role. But Sánchez, as a Premier League-adjusted, ready-made world-class option could immediately revitalise and revolutionise the Old Trafford club's faltering attack like no other.

Deployed predominantly as a false nine last season, Sánchez produced a career-high return of 24 league goals, as well as chipping in with a further ten assists. No United player registered double figures for both goals and assists in 2016/17. Indeed, none could match the Arsenal man's return in either category – Ibrahimović top-scored with 17 goals while Anthony Martial and Ander Herrera both led the side in assists with six apiece.

The level of creativity and goal threat – from a wide position or centrally – Sánchez offers is unlike anything Mourinho currently has at his disposal and would be transformative for the United frontline.

Mourinho is reportedly so interested in – for whom Inter are reportedly demanding a fee of €50million – because the Croatian winger fits the mould of the kind of hard-working and tactically proficient wide-man the former Chelsea boss prizes.

Sanchez, too, fits that definition, but he also brings so much more to the table.

Many United fans are a little underwhelmed by their club's links to the Nerazzurri star – who returned an impressive 11 goals and eight assists in Serie A last term – because he doesn't offer the same degree of fantasy that they have come to expect from the Old Trafford wing wizards of old.

Perišić is determined, disciplined, versatile and proficient. He is adequately creative and offers knows where the net is. But he is not an elite-level forward who would significantly improve United's prospects – a solid option for sure, but not a huge difference maker.

Playing predominately from the left, Perišić, at 28, would conceivably come in and block Martial's path to regular game time on the flank, posing a risk of jeopardising the supremely gifted youngster's development during a crucial stage of his fledgling career.

Effective and efficient though he is, the former Borussia Dortmund winger does not represent enough of a qualitative upgrade to truly make that risk worthwhile – it'd be minor short-term gains at the risk of a major long-term loss.

With Sánchez, that is far less of an issue. Although many of the pitfalls of signing Perišić, chiefly regarding Martial's progress, would also be true if the Chilean were to arrive at Old Trafford, the Gunners star offers such a leap in overall quality that it becomes far more justifiable.

What's more, there is the possibility that working alongside and deputising for a player of Sánchez's immense quality could serve as a useful apprenticeship for the likes of Martial and Marcus Rashford. The former Barcelona and Udinese superstar possesses the kind of skill set that a player such as Martial will surely aspire to.

Plus, the option of playing the Chilean on either flank, as a No.10 or a striker means that he could be shifted around to accommodate the young Frenchman at times too. 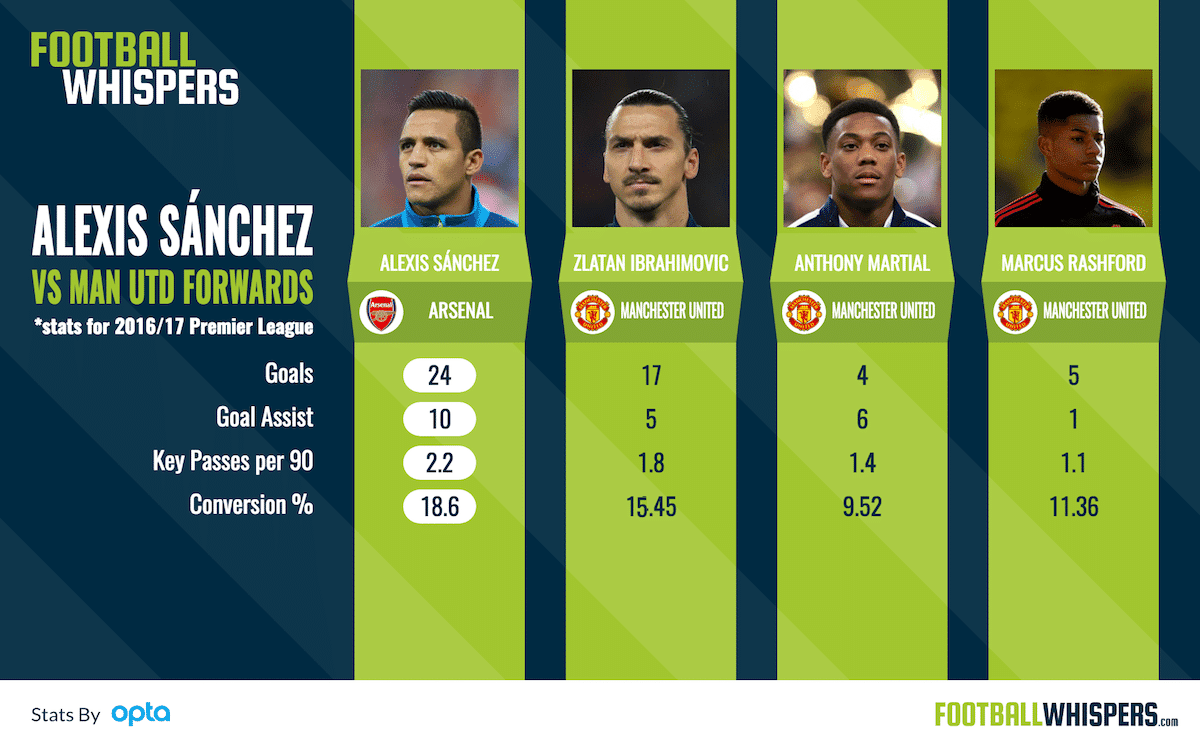 Of all United's players, only Juan Mata (2.5) could better Sánchez's average of 2.2 key passes per 90 minutes last season, while none of Mourinho's men could match the 28-year-old's three completed dribbles per 90. His 18.6 per cent conversion rate may not have ranked him among the most efficient finishers in the division but it was still better than anything mustered by the Red Devils.

Much like when United snared Robin van Persie from Arsenal for £24million in 2012, Sánchez would walk right into the Old Trafford starting XI and make them a significantly more effective and fearsome proposition. His undying commitment and work ethic would satisfy Mourinho, and his ingenuity and inventive flair would have fans on the edge of their seat.

Sánchez, as was the case with van Persie five years ago, is 28 and at his peak, entering the final year of his contract and coming off his most prolific scoring season. If history is any indicator, Old Trafford could be the perfect stage for the 115-cap Chile international. Arsenal will be reluctant to sell their star player to a rival but the will of the player will be key.

City and Bayern remain at the front of the queue to sign Sánchez if he does leave Arsenal this summer. But United would be mad not to throw their hat into the ring.